The Evolution of Beyonce’s Marketing

The Beyhive is ready. It’s been six years since Beyonce’s last album, ten months since she said she was working on new music, and a few days since she deleted all her social media profile pictures. Once those profile pictures change, it’s a wrap. Her fans are already tracking probabilities and outcomes like Nate Silver on Election Night.

But a lot has changed since Beyonce’s last albums. In 2013, she changed the game with that digital drop. So many artists have followed her lead, and now surprise albums are rarely a surprise. In 2016, she released Lemonade on Tidal for the music and HBO for the visual album. Beyonce was a paywalled experience. It spoke to her power, but it said more about the times and the short-lived exclusive music streaming wars.

It’s harder than ever for artists to stand out. Even superstars at Beyonce’s level are finding new ways to make noise. Beyonce rarely repeats new tactics, so her next release has high expectations.

Beyonce creates moments in ways that few artists can. Lemonade deserved all its acclaim, but it got an additional attention boost due to the infamous elevator incident and Jay Z’s infidelity. People were eager to hear from Bey herself. Her line in the Flawless remix “Of course sometimes shit go down when it’s a billion dollars on an elevator,” wasn’t enough. Fans wanted to hear about “Becky with the good hair,” and that’s what they got.

Currently, Beyonce’s personal drama isn’t all out in public, likely much to her preference. There are many artists who intentionally create drama to sell records, but Beyonce’s not one of them. The absence of publicly-known drama does makes it even harder to capture attention, which is a sad truth.

Beyonce will always have built-in awareness with fans though. That’s one of the benefits of being a superstar who rose to power in the 90s and 2000s when monoculture was stronger. Those stars have reached bigger heights than most streaming era stars ever can.

But it’s still harder now than it was in 2016. Every artist and their team is trying to break through all the noise on various social and entertainment platforms. Not too long ago, Adele made her case for not posting on TikTok. Beyonce did start her own TikTok account a few months ago, but has yet to post anything. How will the streaming and social era shape her marketing strategy?

One of Trapital’s most popular breakdowns is Beyonce’s Streaming Strategy, Explained, which I made shortly after Beyonce released her Homecoming documentary on Netflix: 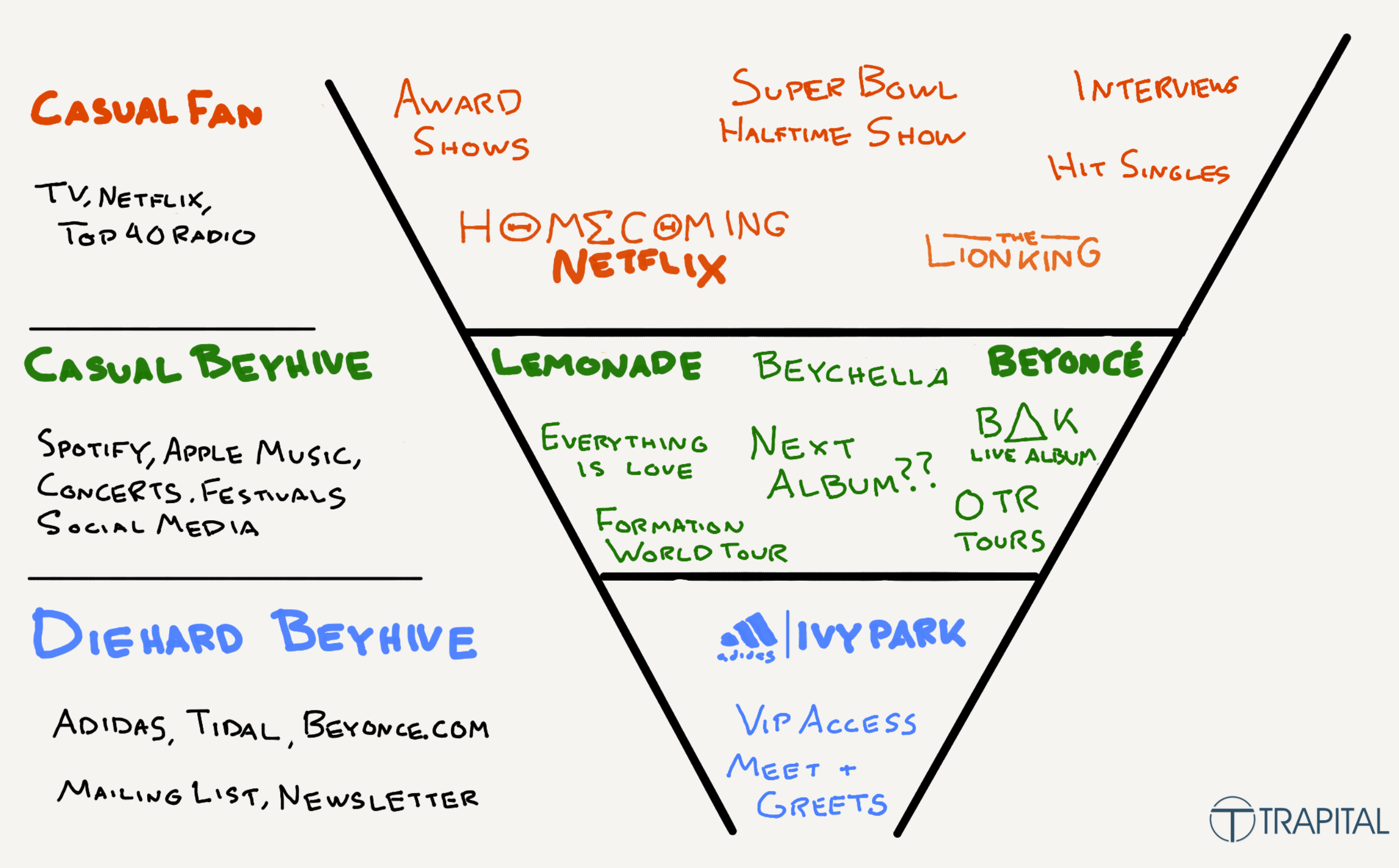 A lot has changed since then, but here’s my prediction for her streaming strategy for the upcoming album:

– Music streaming: The album will be streamed and readily available on all platforms upon release. Most superstar artists who previously kept their music off Spotify (Beyonce, Adele, and Taylor Swift) have since made it available on Spotify given its massive reach.

– Visual component: She will release a visual album and/or documentary on a paid streaming service. In 2019, she reportedly signed a three-project $60 million deal with Netflix, but will that deal still be greenlit given the streaming service’s recent challenges?

– Lead single: Will be released at least a month in advance of the album

This isn’t anything new. It tracks with two of the bigger releases of the past twelve months, which came from Beyonce’s label mates on Columbia Records, Adele and Harry Styles.

They both went with more traditional album rollouts. Both artists had lead singles well in advance, did a series of big interviews, and had other media appearances leading up to the album. Their marketing approach felt like a throwback to the CD era, which isn’t a surprise. The labels want to sell more vinyl, and it’s hard to get fans to spend actual money without a true marketing budget.

For Beyonce, selling high-end, bottom-of-funnel products to the Diehard Beyhive has never been an issue. Her average concert ticket price was over $300 for her last stadium tour! Beyonce is a Veblen good. Consumers seemingly prefer her goods the more expensive and harder to access they are. It’s a status symbol. When she stands in front of a Basquiat painting for a 2021 Tiffany’s campaign, the message she’s sending is clear. She and Jay Z have been pushing this opulent lifestyle since “03 Bonnie & Clyde.” We’re decades in the game at this point.

When Beyonce’s music is available to everyone on ad-supported streaming providers, her monetization will shift further down the funnel. Expect more Ivy Park drops. Expect more content sold to video streaming platforms that will pay eight figures for it. And expect ticket prices to likely exceed On The Run Tour II prices, especially given inflation and the post-pandemic ticket costs.

Beyonce’s not one to leave money on the table. But she also knows the landscape is very different than Lemonade. The real measure of success won’t be in “units sold.” It will be in the moments created, and the revenue she generates elsewhere. That’s how her funnel has always worked.

Steve Stoute
CEO, UnitedMasters and Translation
PrevPrevious MemoThe Rise of Vinyl and the Power of Scarcity
NextDrake and the Monetization of Hip-HopNext