How Gunna Maximized the Moment with DS4EVER and P

Hey! This week’s memo is all about Gunna. January isn’t over yet, but he’s hip-hop’s player of the month. This is a breakdown of how he made the most of the moment for his new release, DS4EVER.

This week’s Trapital Memo is brought to you by TheFutureParty

TheFutureParty is a daily newsletter that curates the most important stories across business, tech, entertainment, and culture. They cover everything from NFT’s and DAOs to the first media company based in space. The newsletter is digestible, smart, and written for highly ambitious creative professionals. It’s one of my favorites to check out.

They also host live events and an exclusive, members-only discord to bring value to their community beyond the inbox. I hear they just added a #wordle channel 🟩 . It’s everything you need and nothing you don’t.

Check it out for free

How Gunna Maximized the Moment with DS4EVER and P

To call Gunna’s big moment in January 2022 a “surprise” wouldn’t be fair. That ain’t P. This is not the 28-year-old’s first time outselling artists who are bigger names. Here’s what I wrote in January 2021 about him and Megan Thee Stallion:

“Hot Girl Meg gets tons of coverage. But her November 2020 debut album Good News sold just over 100,000 units in its first week. It sold less than Wunna, the May 2020 sophomore album from Gunna, her 300 Entertainment labelmate. Gunna’s got talent, but he’s not out here on the cover of TIME like Meg!”

Remember, this is the guy who inspired Rihanna’s Halloween outfit, and they’ve never met.

Gunna’s put in work to develop a fanbase that will stream his music heavily. His elevated success is due to a few factors. Most were in his control. Some of them were out of his control, but he wisely amplified when the time was right.

What Gunna did well:

The P emoji. Gunna popularized “pushin P” for the mainstream. He tweeted a few posts about how he’s pushing P, his friends like Young Thug and Future joined in, and it took off like wildfire.

Virality is random and hard to predict. Countless artists, even the biggest ones with the most devoted fanbases, have started TikTok dances and pushed catchphrases that never took off. Gunna did all the right things for P to catch on, but the unpredictable laws of the internet worked in his favor.

Re-ignite his feud with Freddie Gibbs. On January 5, Gunna tweeted “When my album drop Freddie Gibbs will the biggest moment of his career,” he knew that reviving his ongoing feud would spark up content from all the music blogs, hip-hop social media accounts, and DJ Akademiks—the hip-hop social media personality who has been at odds with Gibbs for a while. All the earned media boosts awareness for the album.

What was out of Gunna’s control, but he amplified:

The Weeknd releasing Dawn FM on the same week, with no physical copies. To be clear, no one should be surprised that Gunna sold 150,000 units in his first week. His prior album Wunna had sold 111,000, so the trajectory is in line.

The bigger factor is that The Weeknd didn’t release any physical copies of Dawn FM, which would have increased his total sales well above the 148,000 it sold. The Weeknd wasn’t focused on sales or a big rollout the way he was with After Hours. Plus, as Billboard’s Heran Maro wrote, several of the songs on Dawn FM are interludes, which don’t perform as well on streaming.

But the narrative of “Gunna outsold The Weeknd” is what sells! He outsold the guy who performed at the last Super Bowl. The narrative lacks context, but today’s headlines aren’t made for nuance. If Gunna had only outsold the Encanto soundtrack, the reaction wouldn’t have been the same.

It followed one of social media’s undefeated laws: give your fanbase a reason to outrage against problematic behavior, and they will stan for you even harder (and potentially until the outrage itself becomes problematic). This boosted Lil’ Nas X’s “Old Town Road” when country music tried to stop the song from charting. He had no control over that happening, but he leaned all the way in to help the song become the viral sensation.

Gunna’s #1 status was great, but I’m more impressed that Gunna almost sold 100,000 units in its second week! It dipped just 33% from its first week, which is a higher yield for most albums in their second week in the streaming era.

That’s for two reasons. First, people want to hear the album that outsold The Weeknd. Second, people want to understand P now that they’ve been seeing it everywhere, even from companies like IHOP and Walmart. Both reasons are tied to the cultural desire to be in the know.

MIDiA’s Tatiana Cirisano did a Google Trends comparison to highlight the difference: 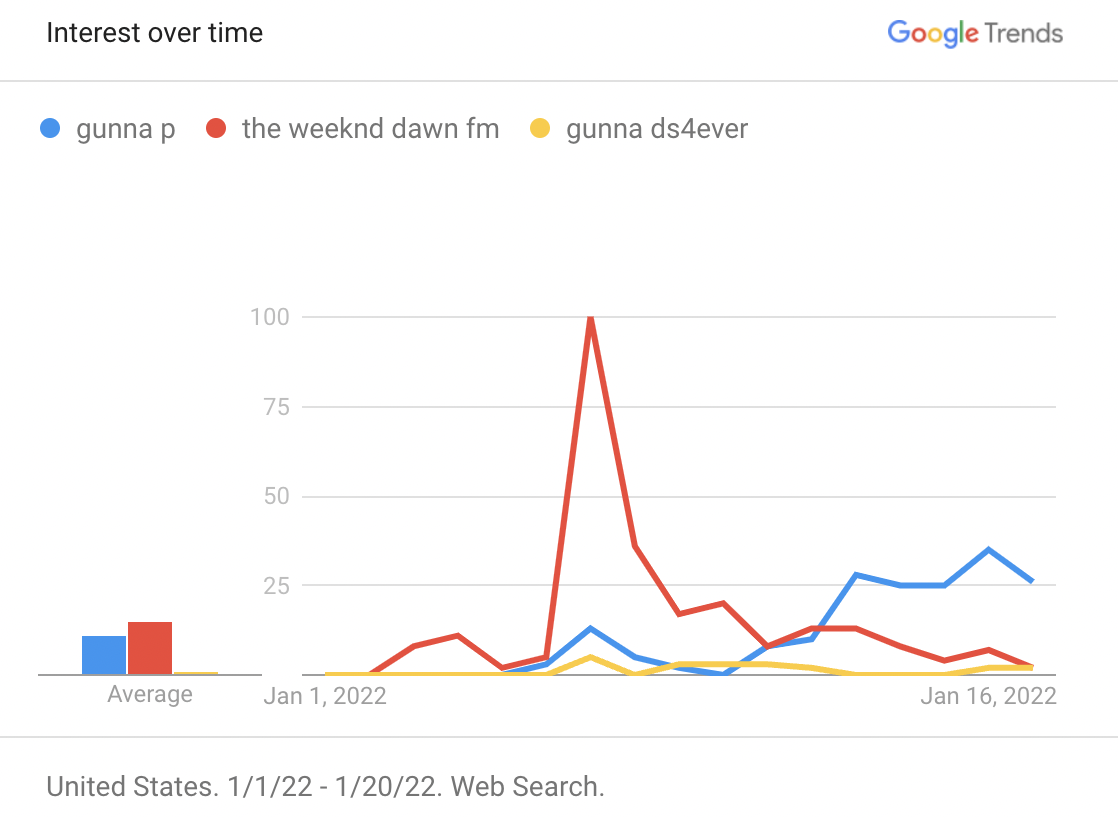 If we drew Gunna’s marketing funnel, P would be at the top. It has increased his awareness with a lot of people who don’t normally check for him, and for those who liked him a little but are now more intrigued. That’s how fanbases grow

In today’s culture, good memes always break through the noise. Sometimes those memes are intentional, like Gunna educating the masses on P. But others are often in cases where fans are laughing at the person, not with them.

Nelly and Kelly Rowland’s “Dilemma” now has over 1 billion YouTube streams, thanks to Kelly Rowland texting away in a Microsoft Excel spreadsheet. Nicole Kidman’s AMC “We Make Movies Better” ad sparked a meme that had people buying movie tickets just to see the ad on the big screen!

Gunna’s wave is a reminder that hip-hop often sets the trends that the mainstream follows. And once it took a life of its own, he amplified it to maximize the effect. That’s what pushin p is all about, right?