How Royal Can Redefine Music Royalties

Hey! Today’s memo is about Royal and its partnership with Nas to share royalties for two of his songs. It combines a bunch of topics I’ve thought a lot about recently, so let’s get into it!

Starting a business is hard. Day One is here to help

Founders are often told to “learn on the job.” But they often jump into the deep end without much support. As a founder myself, I’ve learned this too many times! For most successful founders, the community around them is what helps them continue to grow.

The Day One Fellowship was launched to help talented founders build the next big thing. You will learn from the best operators in closed-door sessions, pitch investors, and level up with the tools and knowledge you need to succeed as an entrepreneur.

Over 250 fellows and 150 startups have gone through Day One Fellowship and have raised over $10 million in funding. Past participants include Bolder, Zette, Cuely, and more.

The next cohort starts January 30! Download the free program overview to learn more.

How Royal Can Redefine Music Royalties

On Thursday, January 20, Nas will sell future royalties for his music on royal, the marketplace that offers collectors ownership in songs via NFTs. This drop was originally scheduled for January 11, but the demand broke royal’s servers! Technical issues on launch day are a product manager’s worst nightmare, but the heightened demand is a good sign.

Here’s a screenshot of the tokens offered for “Rare”: 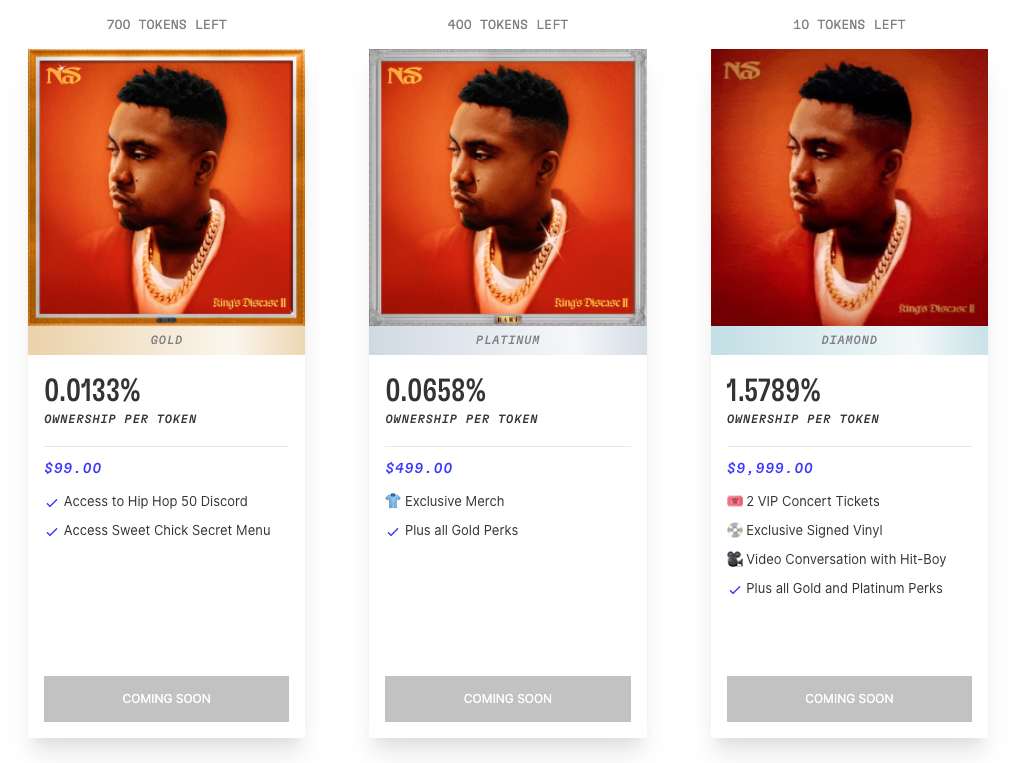 But before we get into song valuations, let’s discuss the consumer behavior behind NFTs.

First, this NFT could value beyond the revenue streams or exclusive access attached to them. NFT rocks and Bored Apes are a reminder of how irrational art prices can be!

Royal’s value-add opportunity is to combine the intrinsic value of art with the investment opportunity of music royalties. That’s how it can set itself apart from a platform like Royalty Exchange, which operates more like the Toyota Camry of royalty marketplaces. It’s a reliable option with all the requirements users need, but it’s not sexy. It attracts investors who are more interested in music investing purely as an asset class. For example, the person who bought a $110,00 slice of “Bodak Yellow” on Royalty Exchange had no idea who Cardi B was prior to buying the song.

Royal can position itself as the Mercedes-Benz S Class of this space; the reliable option that has the investment requirements, signals status, and connects the fan to the artist. It has the status signal and the connection pieces down, especially if NFT artwork is something that its owners share on social media.

But it can strengthen its position by offering investors more details on the song’s streaming performance to convince them of why its worthwhile purchase.

– How much streaming revenue has the song generated in the past 12 months? past 36 months?

– What is the percent breakdown of revenue sources over time?

– If it’s a newer song, how much should they expect revenue to decline year-over-year?

Music Ally did some napkin math on this with the assumption that 1 million streams generates $6,800 in streaming revenue:

So, let’s say you pay $4,999 for a diamond token of ‘Ultra Black’. Using the majors’ calculations, it takes around 735k streams to generate that amount of money for the label (note: Nas owns the label these tracks were released by: Mass Appeal) but don’t forget you only have a 2.14% royalties share.

Multiply that up, and the track needs to be streamed around 34.3m times before you’re in profit. Using the same workings, paying $50 for a gold token (with its 0.0143% share of the streaming royalties) won’t see you in profit until the track has been streamed 51.4m times.

Since its release in August 2020, ‘Ultra Black’ has been streamed just over 8m times on Spotify, while its official video has 4.6m views on YouTube, so these figures seem a tall order.

Does this mean it’s a bad deal? Well, it depends on what you’re buying it for.

If you buy this for the potential upside value of the exclusive token itself, then there’s a chance it follows the path of royal co-founder 3LAU’s token and raises in value.

If you’re buying this because you love Nas or for clout, it’s hard to place a dollar value on that.

But if you’re buying this with the hope that it will be streamed 35 million more times in the forseeable future, you’ll be disappointed.

Royal should share some ballpark stats with consumers! It doesn’t need to be a complex Excel-level spreadsheet that other marketplaces may offer, but it can share that data in a way that’s quick and tangible, especially given the average buyer’s likely lack of experience buying an asset like this. Public has done a great job of this with stocks. The more easily available this is to access on royal’s platform, the better.

The back catalog is where the value is at

The songs Nas is selling on Royal are two of his newer singles. But most songs released in recent years in the streaming era have a short shelf life— even if it’s off a Grammy Award-winning album like King’s Disease. The overwhelming majority of its revenue has already been generated.

The most valuable songs for royalty investors are the back catalog—specifically the songs that are more than a decade old. That’s why Hipgnosis, Round Hill, and the major record labels have paid billions for catalogs of artists who are now in their 70s and 80s. Those songs have shown consistency across decades. It won’t last forever, but the foreseeable future will be steady.

For Nas, that includes his biggest hits like “If I Ruled The World” or “N.Y. State of Mind” which are now 25+ years old. Those songs still get played on hip-hop radio, still do well on streaming, and have a good chance of getting featured in popular movies or shows given their legacies.

But Nas doesn’t own the masters to those songs, which makes it tricky. Royal’s Head of Growth Naithan Jones said to CoinDesk that it’s easier to start with “the least encumbered IP.” But in general, the most valuable royalties are of songs that are owned by the major record labels, or the ones that Hipgnosis and other music investment firms have paid sky-high multiples to acquire.

It’s still the early days. Royal has the brand elements down. The fan-artist connection looks strong as well. If its token valuations can line up with the song’s expected revenue, then it can redefine what music marketplaces can look like.