Jay-Z, Rihanna, and Ye (Kanye West) are on the top shelf of rap’s new-money class. They became world-famous millionaires through the music industry, but realized they would have to sell more than music to become billionaires.

The “Run This Town” trio used music as the gateway, then capitalized on their influence at the height of their fame. Jay-Z made bank from selling Ace of Spades champagne and investing in startups. Rihanna built her Fenty empire into multiple brands. And Ye has sold so many Yeezys he’s probably lost count. The bottom line? Star power gets you in the door, but to maximize your platform, you need to sell something authentic that customers want to keep buying.

The next generation of hip-hop artists have taken note — whether it’s Megan Thee Stallion opening a Popeye’s franchise, Rick Ross’ 20+ partnerships, or Travis Scott turning Cactus Jack into an ecommerce operation for the hypebeasts. The future is wide open. It will be fascinating to watch how the next generation carves out their path to riches.

Streaming is a high-volume game

NBA YoungBoy, DaBaby, and Future all earn a high percentage of their income from streaming because they drop new music all the time. They are hip-hop’s version of Tiger Global —the aggressive venture capital firm that invests in startups at a relentless clip. Sure, there’s a quality drop-off due to the frequency, but the markets reward consistency.

These artists are young in their careers, so their focus on streaming makes sense. Like any content creator, they need some points on the board before they can capitalize. But if they stay focused on streaming indefinitely, they may miss out on higher revenue-generating projects. Their success is dependent on streaming and social media algorithms, which can lead to diminishing returns over time. The grind never stops.

The best-positioned artists can step off the treadmill and look at the big picture. There could be better ways to spend their time and money.

For instance, Future is still one of Atlanta’s most influential artists. Like 21 Savage said, some people in Atlanta still believe that the DS2 rapper is bigger than Drake. Future’s fashion game has always been on point and he’s already launched various brands. If Future partnered with a major luxury clothing distributor, that partnership could secure his base in Atlanta and leverage the city’s influence to maximize his potential.

Meanwhile, NBA YoungBoy and DaBaby may struggle to land attractive partnerships due to their problematic track records, but that shouldn’t stop them. Sure, they may not get invited to the Met Gala, but they can still tap into their fanbase through live performances.

Music is the building block 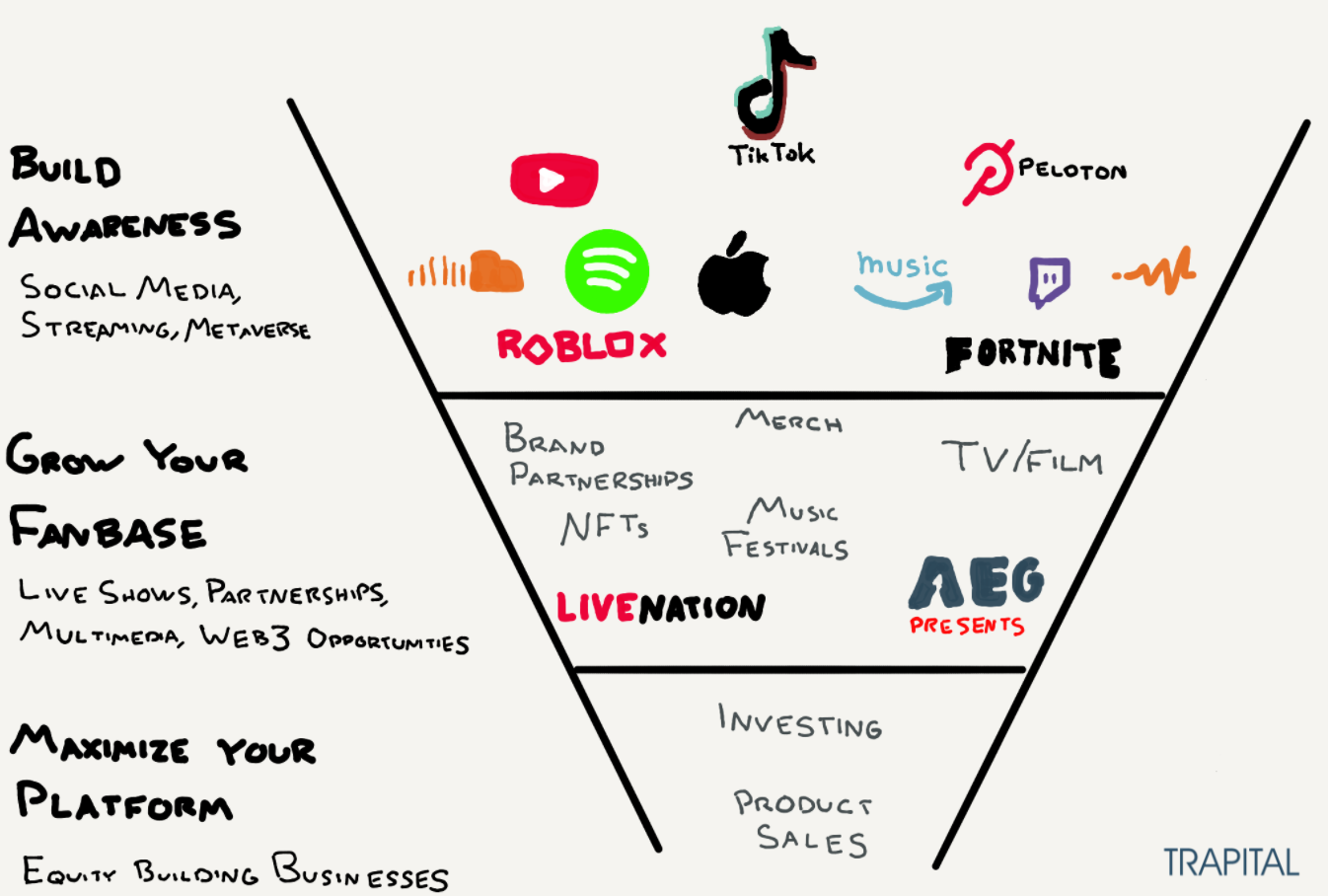 For many artists, the most lucrative bag is the money they make from live performances. Promoters like Live Nation and AEG Presents rose to power when the music industry was recovering from the CD era. They helped put U.S.-based hip-hop artists on the global stage. And as music festivals have grown in popularity, the guarantees and payouts for artists have grown as well.

A new album is a new opportunity for an artist to go on tour, play the hits, make the money, and build the fanbase. The cash flow is great (as long as they sell out)!

But stars with big potential are also looking for something more. Live performances still require artists to rent out their time. Each concert’s revenue is capped based on venue capacity, and each concert ticket is a one-time purchase. After each show, inventory is gone.

The superstar artists who have reached billionaire status–and those who aspire to get there– have launched or invested in companies that sell products that customers buy on a repeat basis. After decades of #1 hits music, touring arenas and stadiums, they took their influence to that next level. They said “pay me in equity” and spoke it into existence.

Look at Rick Ross. When he came on the Trapital Podcast, he talked about how he balances it all. He will always do live shows, but he has made 20+ partnerships with companies like Belaire champagne, WingStop, and Berner. It’s his road to a billion dollars.

But will Rozay start cutting his own lawn if he hits $1B though? He so passionate about weed-whacking that he may never give that up.

Another example is Travis Scott. The “Antidote” rapper toured arenas in 2018 and 2019, and grossed over $100 million in 2020 from his various partnerships with Nike, McDonald’s, PlayStation, and more. He made a ton of money, but the companies he partnered with made even more. If Travis can launch his own products that he has equity in, his hype alone could get him to billionaire status.

How hip-hop stars make their money 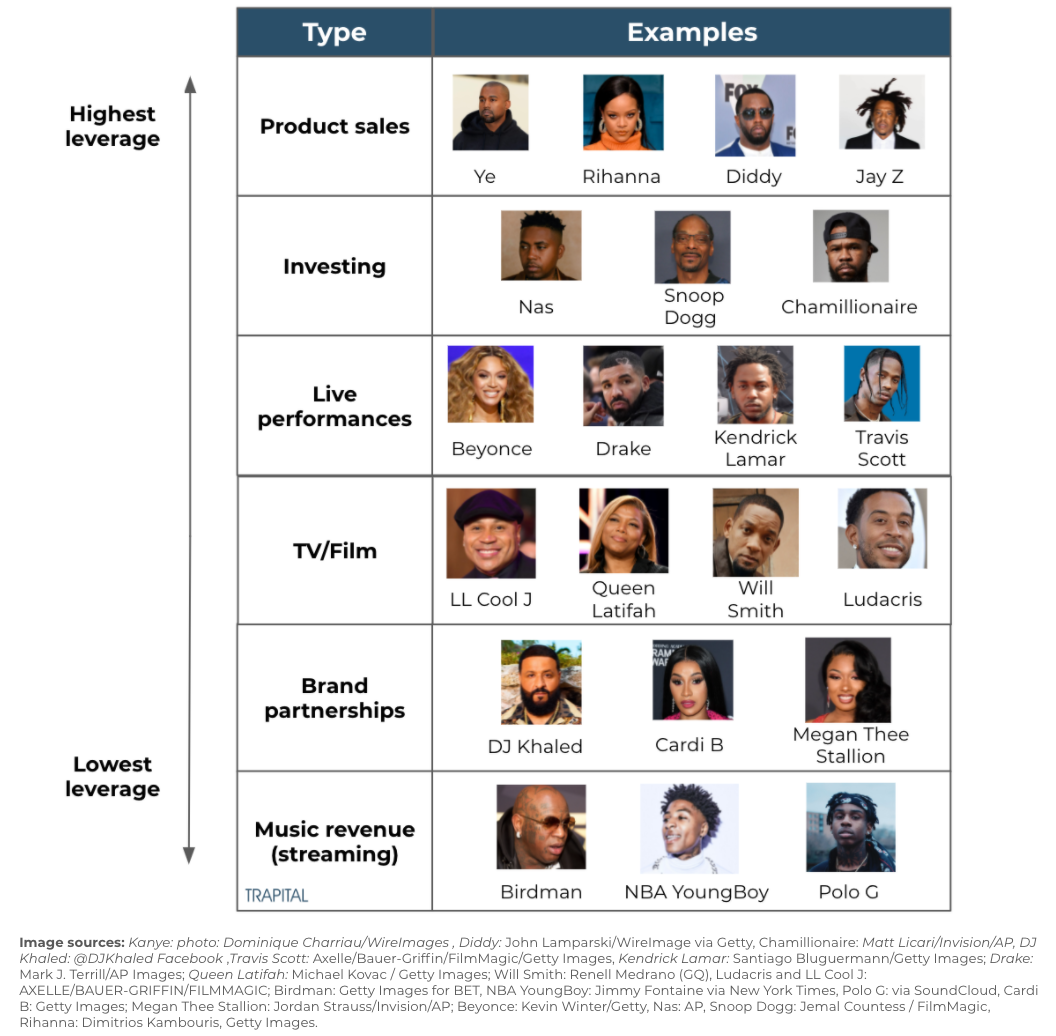 Success in product sales or investing isn’t easy. If it was, then every platinum-selling artist would be a billionaire. Even the success stories had their fair share of stumbles. Rihanna’s LVMH Maison for Fenty didn’t work out. Yeezy failed to take off under Nike’s umbrella. And Jay Z’s has several initiatives that never took off.

Timing matters. Artists need time to build a loyal audience, and the market has to be ready for the product. Great products need great distribution, and artists need product-market fit. Plus, hip-hop’s billionaires were all in the game for at least a decade before they had big success with product sales.

For instance, if Rihanna launched Fenty Beauty in 2006, it wouldn’t have worked. She didn’t have enough clout in the “S.O.S.” days. And unfortunately, the cosmetics sector wasn’t ready to invest in a brand dedicated to women of all skin tones. But in 2016, Rihanna was named the most marketable celebrity in the world, and the industry was ready to support a company built on exclusivity.

The same is true for Dr. Dre and Beats by Dre. He was the right person with the right product at the right time, and after decades of work.

Investing may be relatively easier without the built-in fanbase, but still benefits from the years put in. A younger artist can get lucky with a few $100,000 angel investments, but if they invest in a unicorn can they protect their investment over time? That’s the advantage Nas has with QueensBridge Venture Partners and Jay Z has with Marcy Venture Partners. They are raising nine-figure funds and have connections to the most-respected venture capitalists in the game.

Becoming a billionaire artist often requires a loyal audience to drive distribution, a timely product or service, and the right market conditions.

Future technology may change the game up

More artists have tapped into NFTs and blockchain-related opportunities. Artists can sell their art for higher values, give their fans a stake in their upside, and facilitate contracts more easily with business partners. We’re still scratching the surface on what’s possible.

But any new initiative, whether it’s Web 2.0 or Web 3.0, still needs to add value for customers. Plus, the economics matter. A limited NFT drop can be lucrative, but the scare can quantity still limits sales volume. The NFT’s value may increase over time, but nothing is certain.

Artists should consider how blockchain-based products can support other parts of their business, create repeat purchase opportunities, or build deal flow for other investments. Here are a few examples to consider:

– A sneaker company designed for avatars in the metaverse, like the late Virgil Abloh’s brand. The artist can start with limited drops like adidas did with Yeezy, and scale up as momentum builds

Those are just a few. The opportunities will continue to grow.

Every artist has their ideal mix

There’s no “right answer” for all artists. Instead, there are a few logical paths based on the artist’s fanbase, brand, and the market opportunity.

Artists who want to maximize their businesses will have more options than ever, but they need to prioritize. It’s impossible to do everything. Even Beyonce—who has a whole team at Parkwood Entertainment dedicated to her business— has to choose how she spends her 24 hours. This is where creativity will thrive. We’ll see more success, more failures, and more opportunities for artists as a whole.

Thank you Sarah Grant for editing, and Zack O’Malley Greenburg and others for your feedback.