Last week, UMG’s public listing was the rising tide that lifted (most) boats. UMG’s stock rose 20% on IPO day—triggering a big payday for its stakeholders and competitors.

Timing the market. UMG’s IPO had several winners: Chinese conglomerate Tencent, aggressive investor Bill Ackman, and several UMG execs, to name a few. But the biggest winner of all may be Vivendi. In 2013, the French conglomerate turned down an $8.5 billion offer from Softbank to buy the music group. Rejecting that offer looks better and better each year.

Plus, can you imagine if Softbank owned UMG for the past eight years?! Wild.

UMG’s IPO is a culmination of the music industry’s rising trends: streaming growth, better data on music consumption, record-setting revenue in music, low-interest rates, and more music licensing deals. UMG’s timing is even better than Warner’s 2019 IPO. The post-pandemic music industry has accelerated faster than ever.

Music is cyclical. The major record labels have had plenty of peaks and valleys in their lifetime. The markets are bullish on the music industry’s future, but the bears have questioned if we’re approaching another peak again soon.

In my June essay, Inside Universal, Sony, and Warner’s Arms Race For Your Attention, I wrote this:

UMG’s strategy works now — the company breaks revenue records every quarter —but how long will the bull market last? The company hopes that the streaming revenue growth can offset the cost to maintain its roster, but that’s a risky game.

That’s still true, and I would like to take it further. For UMG and its competitors, their next few years will depend on these four factors:

– Independence. The major record labels will still have valuable back catalogs, which account for 54% of all UMG’s revenue. But that means that 46% comes from new music releases. If more stars want to bypass record labels or push for long-term ownership, then the model has its challenges.

– Fragmentation. Most of the major label revenue comes from Spotify, Apple Music, Amazon, and other DSPs. However, the major labels are betting on a future landscape where more entertainment platforms will secure music licensing deals. Companies like Peloton, Roblox, Snap, and Twitch have all partnered with the labels. Web 3.0 platforms like NFTs, tokens, and blockchain-related opportunities could be next.

– Leadership. CEO Lucian Grainge and the heads of the sub labels have been praised for their leadership, trust they’ve built with artists, ability to adapt to the latest trends. Some labels have been much stronger than others, but strong ones have led the pack (more on this later). 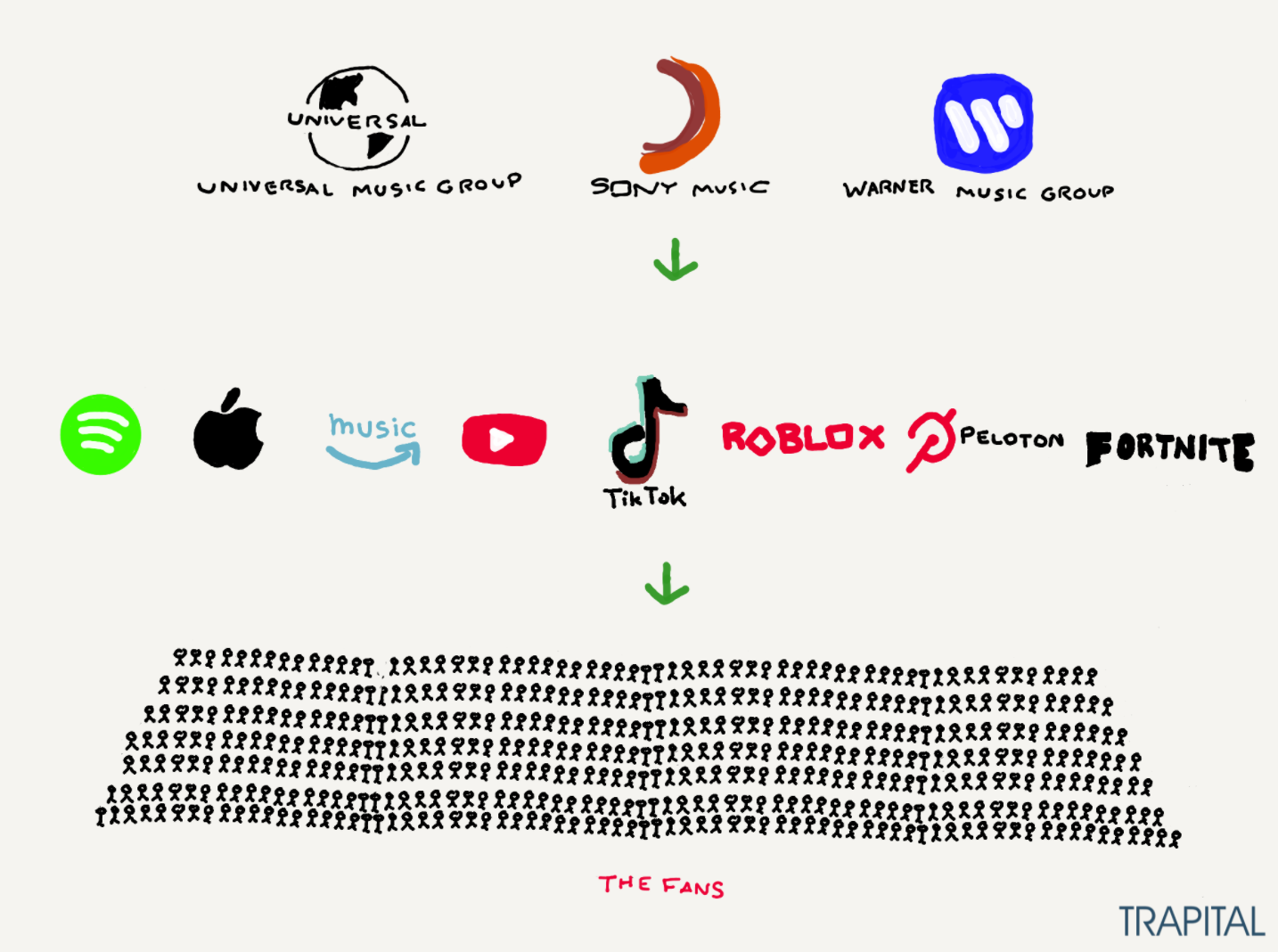 From Inside Universal, Sony, and Warner’s Arms Race For Your Attention (Trapital)

Unlocking the value within the music group

UMG is attractive to many investors since it owns some of the more powerful individual labels. Whether an artist is on Interscope, Capitol, or Motown, it’s still a win. But this is the music industry. Labels move around all the time.

Future spinoffs? For instance, Republic Records has been UMG’s top label for years now. It has the market share and superstars to back it up. But what if its leaders, Monte and Avery Lipman, believe they can unlock more of Republic’s value as a separate entity? If the creator economy has taught us anything, it’s that the most successful members of a group are subsidizing the less successful ones.

On the flip side, what if UMG divests Def Jam to another entertainment company that believes it can take one of hip-hop’s most storied labels to new heights? Plus, some of UMG’s sub labels rely more their back catalogs than other labels do. How will that shift their value over time?

These changes may seem unlikely today, but how many times has Death Row Records moved around? Weirder things have happened.

Universal’s model is to reap the rewards from internal competition. But as the music landscape shifts in the main areas mentioned above (emerging markets, independence, fragmentation, leadership), the desired labels may change as well.

The compensation for artists

One of the most frequent questions surrounding UMG’s public listing is artist compensation. CEO Lucian Grainge and others received bonuses, but the assumption is that artists didn’t receive any compensation.

Artist compensation from record labels and music platforms is a never-ending debate. But this reminded me of Taylor Swift’s past statements on artist compensation. Her 2018 licensing deal with Universal states that if UMG sells its Spotify shares, then artists would receive a non-recoupable distribution of that money. UMG’s public listing doesn’t involve Spotify, but it still resulted in a big payday for the label. Swift hasn’t made any public statements, but I have to imagine that it’s crossed her mind or came up in internal discussions.

It’s only a matter of time before a prominent UMG artist makes a statement in a social media post, song, awards speech, Clubhouse, Notes app, or some other platform. These debates may never end, but the public discourse is what leads to more flexible options that can meet each artist where they are at.