Inside Universal, Sony, and Warner’s Arms Race For Your Attention

Listen to this essay:

Streaming, media, and indies have changed the game for the three biggest major record labels. Here’s a full breakdown on where each company is heading.

The post-pandemic music industry has long-term uncertainty but short-term excitement. Thanks to the backbone of digital streaming, which actually saw more traffic in lockdowns, the music market is hotter than Fetty Wap in the summer of 2015.

But the industry is in a much different place than it was in February 2020. There are now more streaming options, more outside capital, yet more concerns about which trends are here to stay.

The strategies of the Big Three record labels — Universal Music Group (UMG), Warner Music Group (WMG), and Sony Music Entertainment (SME) — dictate the future, even for companies outside of the major label system. They are investing billions of dollars to keep your attention for as long as possible. Their moves signal the best opportunities,  and the areas getting slept on.

Universal is all-in on its superstars

UMG’s roster is stacked. When “free agent” Taylor Swift signed with the label in 2018, no one was surprised. This was like NBA agent Rich Paul getting Anthony Davis on the Los Angeles Lakers. The big star landed in the big market, and made a flex that was hard to turn down.

In late 2018, UMG and its sublabel, Republic Records formed a strategic alliance with the 1989 singer. She signed a long-term licensing deal with two important clauses. First, Swift would own her future masters. Second, and most important to Taylor, if UMG sold any of its 3.5% ownership stake in Spotify (worth $1.6 billion in June 2021), artists get a share of that money.

(Sidenote: For UMG, Swift’s licensing deal isn’t as lucrative as owning her masters. But a smaller cut of Swift’s revenue is better than a bigger cut from most artists.)

UMG, which accounts for over 30% of the industry’s music revenue, has the power to play ball with the biggest artists in the game. The label breeds competition among its seasoned label heads who are hungry for market share and all the glory that comes with it. Beyond Swift, UMG’s reach extends to:


That’s a lot of stars to keep happy. Eventually, they will all want to own their future masters just like Taylor. Remember when UMG CEO Lucian Grainge said that Drake has an “unlimited budget”? All of these artists want that, too (and many more who aren’t listed, don’t need unlimited budgets, but will still ask). And, generally, no superstar asks for less money and control over time. Quite the opposite!

UMG’s strategy works now — the company breaks revenue records every quarter —but how long will the bull market last? The company hopes that the streaming revenue growth can offset the cost to maintain its roster, but that’s a risky game.

The major record labels still have the market share 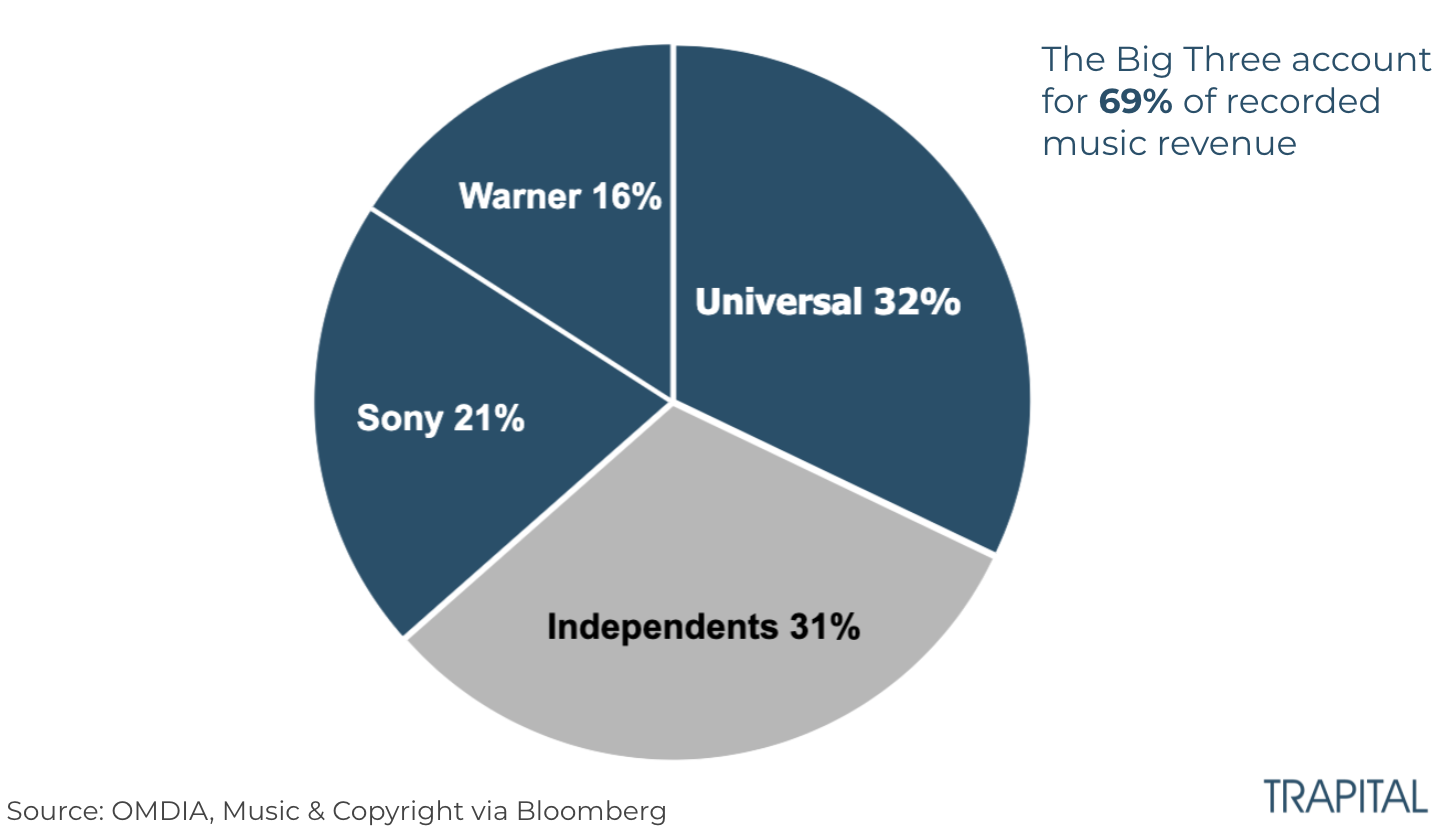 Universal needs its stars for two of its upcoming initiatives. First, the record label plans to spinoff from parent company Vivendi and go public at the end of 2021. In 2020, Tencent acquired 20% stake in the label. In 2021, UMG announced it will sell 10% to a special-purpose acquisition company (SPAC) run by investor Bill Ackman. The deal values UMG at $42 billion, nearly 5x its 2013 valuation.

These deals confirm the rising wave of interest in music investments from institutional investors. And since the stock market often discounts companies in conglomerates, this IPO should unlock more of UMG’s value.

Second, the major record label has expanded in both Africa and Asia. Both continents have great potential for superstar development. That potential is compounded when matched with proven American stars. Nigeria’s Wizkid blew up after his feature on Drake‘s “One Dance.” And Justin Bieber‘s Spanish vocals on the “Despacito Remix” extended the life of a massive hit.

As Grainge explained in a January 2020 interview with Variety, “I’ve been around long enough: I’ve seen two or three very, very significant cycles. I think all we can do is follow our North Star and add commercial, legal and financial discipline to it.”

In 2019, WMG joined an $11 million investment round in the non-fungible token (NFT) company Dapper Labs, home to NBA Top Shot, one of the most successful businesses selling NFTs. Given Dapper Labs’ success with the NBA, there’s a logical extension to NFTs for hip-hop artists.

And in January 2021, WMG made an eight-figure investment in the video gaming platform, Roblox [$RBLX], before it went public in March. Roblox is used by half of U.S. children under 16, according to The Verge. During a standalone Lil Nas X livestream concert, Roblox reached 33 million fans! This was an investment in a platform that may shape the music industry moving forward.

Warner’s buying spree builds direct audience access as digital streaming services wield more and more influence. Streaming may have saved the industry, but labels don’t want to rely solely on Spotify, Apple, and Amazon to run their businesses. If labels become overly dependent on the tech giants, they will get squeezed on margins when it’s time to renegotiate licensing deals.

Warner CEO Stephen Cooper knows this, but doesn’t show much concern. When CNBC asked him about Apple and Spotify accounting for 27% of Warner’s 2019 revenue, he focused more on emerging media companies gaining traction.

“A couple of years ago, Peloton was associated with people dressed in very colorful uniforms riding bikes through the Alps. Today, it’s an exercise app. Nobody heard of TikTok two years ago. Social platforms are embracing and adopting new uses of music. We think distribution will continue to be fragmented.”

Fair point, but a bullish take.

Peloton and TikTok are hot, but will they ever account for 27% of Warner’s revenue? Doubt it. Labels and streaming services need each other, but both are in a fierce tug-of-war to prove that they don’t.

The labels > the platforms > the fans

Sony Music is buying up all the indies

Sony has been out here spending like it has leftover FSA money that expires soon.

In a six-month span from 2020 to 2021, Sony Music spent $1.4 billion acquiring independent record labels like AWAL, Human Re-Sources, Som Livre in Brazil, Believe, its remaining stake in The Orchard, and formed a partnership with BeatStars, a beat production marketplace. If you’re an indie distributor making waves, Sony has your company’s name written on a whiteboard somewhere in its office.

The record label operates like the music industry’s Facebook. If the tech behemoth can’t acquire a rising platform gaining steam, it will try to build it in-house.

Sony is on this tip because the indie movement is hotter than ever. In 2021, 60,000 songs got added to Spotify per day — 50% more than in 2019. With so much talent and technology out there, indies have found new needs to fill and get creative about the kinds of support they offer artists today that didn’t exist 10 years ago. Or even six months ago.

The downside for indie labels is hitting a money ceiling. Indies struggle to maximize reach for their biggest artists. They get stuck between the barbells of media. Too often, when indie labels sell, it’s from a position of weakness. That’s why indies are perfect acquisition targets for Sony.

“It’s much more expensive today to sign talent than it was six months ago,” said Sony CEO Rob Stringer to Music Business Worldwide. “It’s way more expensive than two years ago — and going back to the 2000s, the download era, it’s not even comparable.”

Talent acquisition is more expensive because entertainment revolves around fan’s preferences. Attention is the economy. And that attention is harder than ever to capture.

The fight for your attention is a bet on the future

The Big Three want the same thing, but their paths to get there show how multi-faceted the landscape truly is.

Warner’s investments in Roblox and Dapper Labs highlight the “fragmented distribution” that Cooper is betting on. Those investments may pay off, but those companies won’t exclusively work with WMG artists. They’re more likely to work with the other two major record labels with more star power.

Sony’s acquisitions are investments in the future. It stockpiled all the lottery draft picks like an NBA front office building for the future. Sometimes those draft picks turn into Kevin Durant, but it might be harder to find the next KD in the modern era. The microwave era of music has shortened the shelf life for many new artists.

That’s why UMG is in the best position. This is still a superstar industry. The superstar model has been here since the heyday of monoculture with acts like the Beatles, Pink Floyd, and David Bowie. When Universal acquired EMI in 2011, it gained the catalogs of those artists, boosted its market share, and guaranteed its position to attract the most valuable artists moving forward.

Granted, Warner and Sony have superstars, too. Warner’s Atlantic Records has Cardi B, Ed Sheeran, and Bruno Mars. Sony has Beyonce and Adele on Columbia, and Travis Scott on Epic. But UMG is still on top because it has more artists at that level and the best opportunity to acquire them in the future.

Will Drake and Taylor Swift still be superstars ten years from now? Maybe. It will be hard for new stars to reach their level of success in the current landscape. But artists are the core of the industry, and every label would rather have too many superstars than not enough.