Why Hollywood’s Overall Deals Are The New 360 Deals

Hey! Who’s excited about Peloton and Verzuz teaming up? At this point, Peloton has more in common with Spotify than it does with other fitness companies. Don’t be surprised when Peloton becomes part of the artist promo run. I can already hear Alex Toussaint: “Drake sent me an early copy of Certified Lover Boy. Let me play a song for y’all. Keep that cadence 90-100.”

1. I need to own everything. Ownership!
2. I can’t make money on streaming
3. NFTs will save me
4. I’ll make all my money on tour

There’s nuance in all those statements, and there’s no better person to discuss with than Dame. His Funk Volume record label made millions of dollars, he’s partnered with major labels, and he’s managed indie artists. He’s seen it all and has a great perspective on this.

Tap in on Apple Music, Spotify, or watch on YouTube.

Issa Rae, WarnerMedia, and the rise of overall deals

Last week, Issa Rae signed a five-year overall deal with WarnerMedia which covers her TV projects on HBO Max and a first-look deal for her film projects. In overall deals, TV/film studios pay talent to own all projects or ideas they create for the length of the deal. Even if the studio passes on an idea, it can’t be shopped elsewhere if the deal is still under contract. Meanwhile, a first-look deal gives first right of refusal on all projects, but the talent is free to shop it elsewhere if it’s passed on.

She’s one of many stars who have signed such deals. Her launch video explained the vision for her company, Hoorae. The synergy map I drew last year on Issa Rae’s businesses wasn’t too far off from that vision!

Loyalty, loyalty, loyalty. By the time this deal ends in 2026, it will be eleven years that Issa has been with HBO. Eleven! That’s a legit marriage. “They wifed me up,” Issa said to Variety. “When people believe in you and build with you, I tend to want to further that relationship.” HBO better hang Issa Rae’s jersey in the rafters after this.

It reminds me of what Charlamagne Tha God said after his latest five-year iHeartMedia deal and what Roy Wood Jr said on the Trapital Podcast after his Comedy Central deal. If companies do right by talent and have their back, they will be less likely to jump ship. It’s especially true for Black talent since Hollywood is notorious for the BS. Remember the unnamed ABC exec who told Shonda Rhimes “Don’t you have enough?” If that never happened, Shondaland may never have left ABC for Netflix.

The overall deal wave. Issa’s deal is similar to the deal that Donald Glover signed with Amazon, Keke Palmer signed with eOne, and others. These deals have had a resurgence in Hollywood for a few reasons:

–More shows: the number of original scripted TV shows has more than doubled in the past decade. The streaming era has led to a boom in shows. Netflix, HBO Max, Disney+, and others want to lock up good talent—actors, writers, showrunners—to increase the likelihood of releasing shows that attract and retain subscribers.

Why Overall Deals are Hollywood’s 360 deals

It’s hard to say whether this trend is good or bad. It all depends on leverage.

Variety reported that Issa Rae’s deal is worth $40 million, which Issa said is cap. Her deal likely includes a percentage of future profit from the movies she creates and stars in, and potentially an ownership stake in content produced since Issa has previously commented on the fact that she didn’t own any of Insecure, HBO owned it.

But for most stars, these overall deals will likely be an upfront lump-sum payment in exchange for any potential backend payouts or ownership.

It’s Hollywood’s version of the music industry’s 360 deals, where music companies get a cut of revenue from all of the artist’s entertainment-related business and merchandise.

Sure, 360s can be great if the deal is like Jay Z’s 2008 Live Nation deal—a landmark win-win $150 million deal for both parties. But most talent don’t have that kind of clout.

Future backlash. There are a few insiders who predict backlash for these overall deals. Here’s what talent attorney P.J. Shapiro told The Hollywood Reporter in a 2019 interview:

“The downside, of course, is if you create Friends and sell it to Netflix and never have the opportunity to sell it into syndication. Those few precious home runs have been replaced with a bevy of singles, doubles and triples.”

Shows like Friends, The Office, and Seinfeld are like unicorn exits for a venture capital firm. But those shows are products of a past era. The streaming service business model is so powerful that the likelihood of ten-season broadcast network phenomenons is rare. Even Game of Thrones, an eight-season series, is a product of the past era.

If most shows won’t last four seasons, actors won’t reach the point where the Friends actors salary can jump from $22,000 per episode in the first season to $1 million per episode in the last season. That’s how the streaming services maintain leverage. 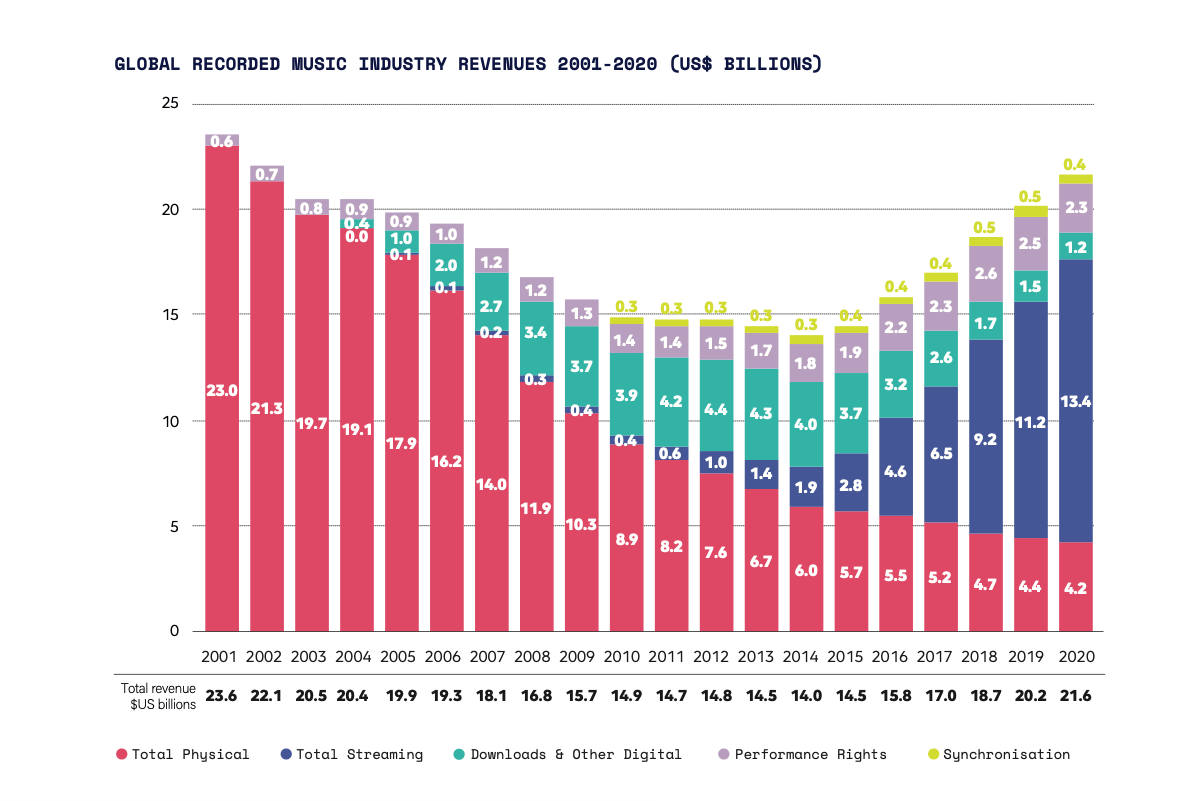 IFPI’s Global Music Report 2021 has gotten tons of coverage and headlines. The biggest headlines are that 2020 recorded music revenues hit $21.6 billion, a 7.4% increase from 2019. And 62% of the revenue came from streaming. No surprises there, but here are a few less discussed but interesting findings.

Vinyl’s continued rise. Sales grew 23.5% last year, up from 6.1% in 2019. Vinyl is pandemic proof, and it’s not going anywhere for a while. Smart artists have leaned in. Tobe Nwigwe gave his vinyl collector’s set top-shelf treatment in his merch store.

Vinyl are collectibles. It’s a callback to a time when fans valued owning art. It’s not too different from the physical trading card boom that’s happening right now. The trading card rise is driven by the underlying financial opportunity, but vinyl isn’t too far off. More artists will drop limited quantities of their vinyls, and scarcity always drives up value.

Sync revenue will bounce back. Synchronization (the use of music in media like games, TV, film, ads, podcasts, etc.) declined 9.4%, but that dip came from pandemic-related production delays. Now that vaccinations are up and production is back on, this will bounce back.

Plus, all of the recent music catalog sales mean that the new owners will go out of their way to maximize those assets. So get ready to hear even more Bob Dylan, Calvin Harris, and all the artists who have joined in on the music catalog shopping spree.

The BTS impact. South Korea’s music revenue grew 44.8% last year. It’s now the sixth-largest music market (behind the US, Japan, UK, Germany, and France). That’s impressive. It’s largely driven by K-Pop, which is largely driven by the world’s biggest musical act of 2020, BTS. The boy band gets credit for massive numbers, but it rarely gets mentioned as a driving force of the streaming era’s growth. BTS put a whole damn country on its back and shows no signs of slowing down.

-Essay: Will and Jada Pinkett Smith – It’s coming! Finalizing a few things. Trust me, you’ll love this one.

Steve Stoute
CEO, UnitedMasters and Translation
PrevPrevious MemoDrake’s Longevity and Why His Run Continues
NextThe Quest for the Respected MogulNext