Each week, this memo gets sent to nearly 6,000 people taking hip-hop to the next level. Let’s keep that going. Join us.

Hey! September was the strongest month yet for Trapital. 850+ new subscribers=! Thanks to everyone who spreads the word. Want to make October even stronger? share Trapital by text or email.

This memo is your weekly breakdown on the business of hip-hop. Today we’re covering two topics: Cameo’s strong 2020 and the music startup indify.

Friendly reminder: today is the last day to register to vote in several states! It takes two minutes, register here. I sent in my ballot last night. Got my “I Voted!” sticker on today. Not playing any games this year. 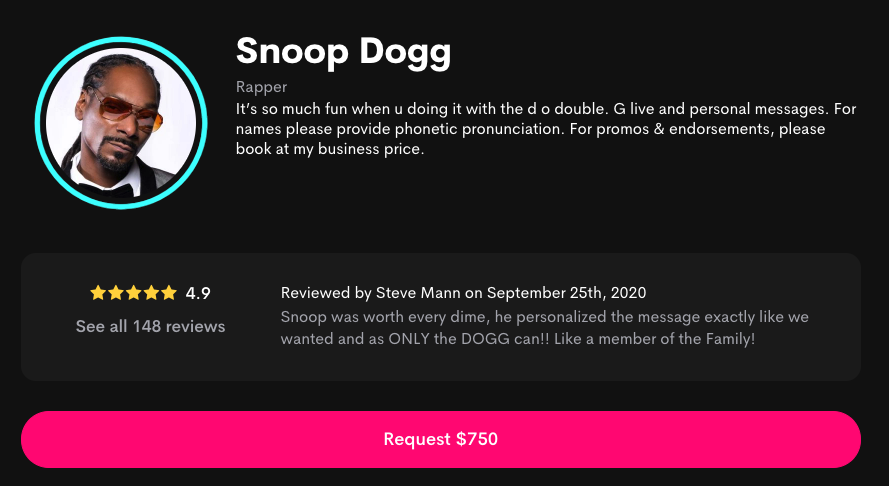 A screenshot from Snoop’s Cameo page, who charges $750 per video.

When Cameo started, the video-sharing app was the place for D-List celebs to make a few extra bucks. You know, the type of people who get paid to show up at Atlantic City casinos. But now, Cameo has grown 1000% since the start of the pandemic and shows no signs of slowing down.

A two-sided marketplace. In a March article by Marker, CEO Steven Galanis said that his product has an addressable market of 5 million celebrities. Cameo made a 2×2 BCG matrix: X-axis is willingness to use Cameo, and Y-axis is fame. The “dream” customers are the most-famous and most-willing, but Galanis started with the bottom-right quadrant: the less-famous, more-willing D-Listers. Those D-Listers don’t matter to the masses, but they matter a lot to a select few. It’s another example of the power in reaching niche audiences.

Quarantine boom. COVID has been a blessing in disguise. Cameo was a perfect birthday, graduation, or gag gift that was perfect for social distancing. As Cameo has grown, the B and C-list celebs have joined in too. Galanis moved into that coveted upper-right quadrant faster than the company likely predicted. It even has a whole Black Excellence section now. Well excuuuse me.

Cameo has also gained steam as an influencer marketplace. Companies book celebs for shoutouts the same way they do on Instagram.

Here are some current stats:

Cameo takes a 25% cut. It’s on track for ~$27 million revenue and still growing.

Competition? That 25% cut for Cameo isn’t cheap. A celebrity can create their own system without the steep cost. Blac Chyna charges fans $950 for FaceTime and $250 for an Instagram follow, and processes it all through PayPal transaction fee (2.9% + $0.30). She still has an account on Cameo which helps discoverability, but has her own setup.

And remember, Blac Chyna got dragged for charging fans for engagement and now look at Cameo’s glow up. I’m no Blac Chyna apologist but I’M JUST SAYIN…

Future in animation? Eternal founder Reggie James had a great idea: Cameo should make a licensing deal with Disney so that characters can wish kids Happy Birthday.

Read more about Cameo’s latest boom in The New Yorker.

It’s a free, invite-only monthly email with 5 links to the best articles, essays, and videos. Refer 3 friends to Trapital and you’ll get the Top Five in your inbox on the last Friday of the month.

indify aims to pair the best with the best

A music startup wants to be the matchmaker for the best artists and their numerous business partners.

A multi-use platform. On indify, distributors can send deals to artists, digital marketers can find rising artists, lawyers can find clients, and more. indify uses its data to predict which artists will pop. It then facilitates artist-friendly deals with 50/50 (or better) splits and artists retain ownership of their masters. It sounds a lot like the Y-Combinator for Music that Kanye West has pushed for.

Indify has evolved from indie music empowerment to ranking unsigned artists to the matchmaking service it is today. It’s now backed by Reddit co-founder Alexis Ohanian and others.

The marketplace The five-year-old startup is trying to fix one of the biggest problems in the music industry. “…often you see that it’s not that the best partners and the best teams are working with the best artists, it’s that the people who reached out first are,” said indify CEO Shav Garg in a Rolling Stone interview. “The alternative is so inefficient—you just look through Instagram DMs.”

This is a huge opportunity to fix. Frankly, it’s a bigger opportunity than record label contracts! If the superstars and rising stars have the best people around them, the game would change.

For instance, Steve Pamon, president of Beyonce’s Parkwood Entertainment, was Billboard’s co-executive of the year in 2019. But several dominoes had to fall before there was an opening to work alongside Beyonce. And by that point, she had already been in the music industry for two decades.

There are more people at Pamon’s level who would love to work with a superstar, but many superstars stick with their early teams. Hip-hop normalizes the mentality of sticking with those who were shootin’ with them in the gym. Loyalty is honorable, but that’s a romanticized narrative. Public tech companies rarely have the same leadership team that they had when they were 50-person startups. At some point, you gotta cut ties and level up.

Trapital Player of the Week: 21 Savage

The Atlanta-based rapper is on track for a big sales week for his latest album Savage Mode II, a collab project with Metro Boomin’. But he won this week because Morgan Freeman narrated his album. That’s right. The 83-year-old acting legend who starred in one of the greatest movies ever (The Shawshank Redemption), was out here breaking down the difference between snitches and rats. We’ve been talking about celebrity cameos throughout this memo, but 21 landed one of the most iconic ones of all. Salute!

Honorable mentions to Rihanna for another successful Savage x Fenty fashion show and Master P for starting his own cereal company.

webinar with Cherie Hu – on October 15, I will be hosting a webinar with Cherie, a music journalist who runs Water & Music. We are covering some of the moves that the major tech companies have played in music.

next essay on Apple Music. Stay tuned for this one. It’s a deep dive on the streaming services strategy, how it’s hip-hop focus has evolved, and how the Apple One bundle may impact it.

Have a great week! Let’s go into this week with the same energy Jimmy Butler had last night in the NBA Finals.

Steve Stoute
CEO, UnitedMasters and Translation
PrevPrevious Memomemo 008: all about expansion
Nextmemo 010: the only Christopher we acknowledgeNext