The global entertainment company has grown stronger since it leveled up and focused on its influential customers.

Listen to this essay:

On June 30, 2020, Netflix made two huge moves. It transferred $100 million to Black-owned banks and named Bozoma Saint John its chief marketing officer. These announcements came in the wake of George Floyd’s murder. Society called on corporate America to do better, and the video streaming company responded. It was an end-of-the-quarter flex that built confidence with shareholders and customers alike.

This was no surprise. Netflix had recently promoted more Black executives, elevated its Strong Black Lead initiative, and acquired more Black content. Black subscriber growth has been a key driver of Netflix’s performance. Customers now expect the streaming titan to be a hub for Black culture.

But one day, that growth may slow down. And when it does, will Netflix keep this same energy?

Netflix feared missing out on a pivotal moment

In 2013, Netflix was praised for the diverse cast of Orange is The New Black. It was a step in the right direction, but the strategy didn’t take off until 2015 when a group of Black employees spoke up.

From Ben Smith in The New York Times:

In the summer of 2015, Black employees at Netflix produced a memo and PowerPoint presentation to make the case that the company was missing an opportunity with Black audiences. They argued in the documents, which I obtained, that Netflix risked missing a boom defined by “Empire” at Fox and “Black-ish” and “How to Get Away With Murder” on ABC.

At the time, the memo estimated, only about two million Black households were subscribing to Netflix — 5 percent of its total subscribers. It said that Black households were a $1.4 billion revenue opportunity and that few of Netflix’s top 100 shows, popular across other groups, were resonating with Black audiences.

These shows often get lumped together, but they tell different stories. Black-ish viewers are 20% Black. How to Get Away With Murder was 31%. They proved, yet again, that Black-led shows can reach the masses. The majority of their viewers were non-Black, yet still brought in more Black viewers than most primetime shows.

Meanwhile, Empire’s audience was 63% Black. It was Fox’s biggest hit in years. It was Terrence Howard’s biggest hit since he fumbled the bag with Iron Man. Black shows with a majority-Black audience could succeed on a major network too.

Netflix had the data and budget to target these segments. It could reach that Shondaland – ABC audience with shows like Seven Seconds. It could reach majority-Black audiences with Tyler Perry’s A Fall From Grace. This was the perfect challenge for a company that doesn’t play by Hollywood’s rules and spends more money on content than everyone but Disney and Comcast.

The “Law of the Few” to grow subscribers

The Black audience value is deeper than subscriber counts. This is also about influence.

Let’s assume Netflix paid $30 million total to produce and market Homecoming. According to the Financial Times, Netflix’s customer lifetime value is just under $200. A 3:1 ratio of ‘lifetime value’ to ‘customer acquisition cost’ is a common target in tech. If Netflix wants Homecoming to meet that, the documentary needs to bring in (or maintain) 450,000 subscribers to justify the $30 million it spent.

Homecoming drew 1.1 million viewers on its first day with a 63% Black audience. Black people over-index in consumer power. We are 44% more likely to post about our favorite brands on social media, which leads to more trending topics and more earned media.

Netflix rarely shares stats, but let’s safely assume that Homecoming was more valuable than Netflix’s Taylor Swift documentary, Miss Americana. Taylor’s Swift’s audience may technically be bigger, but Beyonce’s is built different. The Beyhive runs like a low-key inside sales team. It’s a group of passionate mavens who attract subscribers by spreading the word. This is the “Law of the Few” that Malcolm Gladwell broke down in The Tipping Point. In this case, the “few” are the tens of millions dedicated Beyhive members–especially those at the bottom of her sales funnel.

This is the power of the Beyhive. A limited few can easily reach the masses: 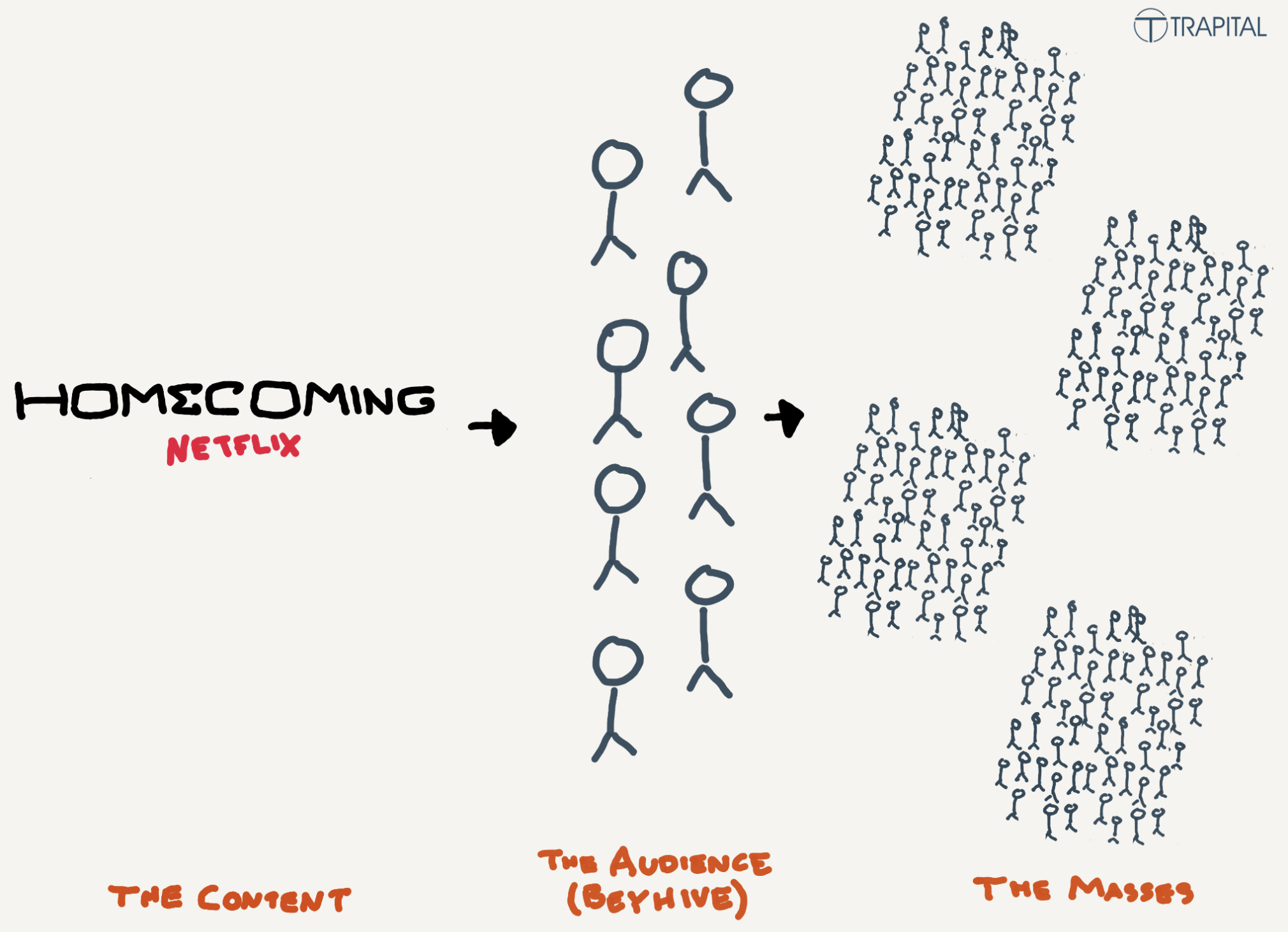 But this isn’t just a Beyhive fanatic thing. This extends to most Black content in Netflix’s catalog. These nuances need to be factored into the company’s lifetime value / customer acquisition cost ratios. If a customer is more likely to attract other users, then the company should spend more to acquire that customer.

Produce the content, build the relationships, brand the initiative

Netflix’s Black content strategy can be broken down into three parts. First, it acquires and produces the content. It gets the 90s classics like Menace II Society and Set It Off. It also creates originals like What Happened to Miss Simone? and The Black Godfather. (Fun fact: the Black Godfather, entertainment exec Clarence Avant, is the father-in-law of Netflix co-CEO Ted Sarandos. Small world.)

Second, Netflix builds relationships with popular Black directors. Ava Duvernay has done several projects with the entertainment company, including upcoming ones on Colin Kaepernick and Nipsey Hussle. Spike Lee had trouble finding a home for Da 5 Bloods, but Netflix came through. In 2019 Black directors helmed 13% of Netflix’s feature-length releases, compared to 5.5% for the rest of Hollywood. Netflix then gave those filmmakers a platform to tell their own story in the First Time I Saw Me campaign. The company also has deals with showrunners Shonda Rhimes and Kenya Barris.

Third, it branded the initiative. Strong Black Lead used to be the company’s internal employee resource group. In 2018, it became the marketing arm to highlight stories, produce podcasts, and engage with its audience on social media.

But to be fair, it took Netflix some time to get here. In 2018, the company fired a PR exec after repeated use of the N-word. Its infamous algorithm has made it difficult to find Black content. And its personalized artwork may have people thinking Molly’s Game is a movie starring Idris Elba.

It’s far from perfect. Yet still, it’s ahead of most competitors. Over time, Hollywood’s racial shortcomings became Netflix’s arbitrage.

This 2018 video from Netflix recreates the iconic 1957 “A Great Day in Harlem” photo.

The shift from acquisition to retention

The Black content strategy may shift from acquisition to retention, which could mean changes. For instance, the two most popular shows on Netflix were once The Office and Friends. These shows were audience anchors while Netflix built up its original programming.

But by the time WarnerMedia and NBCUniversal bought the exclusive streaming rights to Friends and The Office respectively, Netflix was good. It treated those shows like undervalued players on its NBA roster. It got a great deal under the initial terms, but once the deals ended, other teams paid up for the max contracts.

Churn is not a big issue either. Netflix has the highest retention rate of any over-the-top streaming service. Two-thirds of its customers are still signed up after 12 months. The more ubiquitous the service becomes, the harder it is to leave. If Netflix knows it has an audience, and it’s less likely to leave, will it still put the effort in? Historically, we’ve seen networks like Fox, UPN, and The WB pull this stunt before.

Remember, Netflix isn’t scared to make unpopular moves. This company is known for its anybody-can-get-cut approach to talent. CEO Reed Hastings has said on several occasions that Netflix is a team, not a family. Even Qwikster, a PR nightmare that lost the company 800,000 subscribers, was still reinstated years later with DVD.com.

But Netflix shouldn’t stray for several reasons. If the “inside sales team” has nothing to tell their friends about, then the value of the content will drop. Word of mouth is still undefeated.

Next, the Black audience still has room to grow. For context, 24% of Twitter users are Black. And Cash App is now a $40 billion business with help from hip-hop. Plus, most other video streaming services are just now trying to get where Netflix is now. It would be foolish to let that slip.

Black-led content is also extremely popular overseas. It’s America’s biggest cultural export. This content will resonate in Netflix’s growth regions. The playbook can be adapted for other cultures too, with shows like Top Boy. The addressable market may shift, but the love for the culture stays the same.

Netflix is operating in a different era of entertainment. This is a world of Black Twitter, Oscars So White, Black Panther, and the dozens of networks vying for Black content. Accountability is high, interest is high, and the same excuses don’t work.

Other networks have adapted as well. HBO cleaned up at the 2020 Emmys thanks to Black-led shows like Watchmen and Euphoria. It also landed Michaela Coel’s I May Destroy You after the actress turned down Netflix’s offer.

Netflix still has the power. With almost 200 million subscribers, distribution is its biggest strength. But if it gets caught slipping, its competitors are more than willing to take its place.

Correction: an earlier version said Netflix is a $40 million. That was a type. It’s a $40 billion company.