How Tyler, The Creator Built a Cult-Like Following

Tyler’s greatest creation is the loyal fanbase that’s been riding with him for over a decade.

Listen to this essay on Apple Podcasts or Spotify.

Tyler, the Creator’s Grammy victory still feels ironic. The self-proclaimed outcast earned the most mainstream award possible. He did it in rap—a genre he’s repeatedly distanced himself from. He did it with a history of problematic lyrics and a “fuck you, try me” attitude to cancel culture. But his Best Rap Album award was met with widespread praise from both day-ones and new fans.

The 29-year-old’s greatest creation isn’t his award-winning albums, eclectic fashion show, or one-of-a-kind music festival. It’s his cult-like following that makes it all possible. Since he started his career as a teenager, he’s been a symbol for those who were ignored by hip-hop. Those fans have rewarded him with the utmost support.

An addressable market that was ignored

In 2007, Tyler the Creator’s Odd Future collective was born. In the early days, the group’s Tumblr and YouTube pages were its gateways to the world. Fans got a behind-the-scenes view on the wild antics from Tyler, Frank Ocean, Earl Sweatshirt, Syd, Taco, and others.

Here’s a quote from The Face on how Tumblr strengthened Odd Future’s connection with fans:

The genius of Odd Future’s Tumblr page was how it made you feel like one of the family. You had a front row seat and got to watch as the group slept on each other’s floors, dealt with dodgy promoters, and humbly ate French fries together at a diner. This meant that by the time they did their first TV performance, or when Tyler won a VMA and Frank won a Grammy, the day one Tumblr followers felt like they had gone on the same journey, and each had a personal stake in this success.

Hip-hop was always known for its idolized archetypes. Even in the rap blog era, there was a certain type of artist that got covered by sites like NahRight and 2DopeBoyz, and it definitely wasn’t Tyler. Odd Future was for the people who watched Aqua Teen Hunger Force and played non-sports video games. As Tyler once put it, his brand is for the people who go to Taco Bell or make an illegal deal that they should not be doing. Would that audience get targeted by Vanity Fair? No chance. But it’s still a valuable group.

Businesses often confuse what’s sexy with what’s profitable. It’s often the exact opposite. Trends attract competition, so there’s less money to go around. The best moves are often where others aren’t looking. Tyler has a “not everyone is accepted everywhere and that’s fine” mentality that has served him well in both life and business.

The right opportunities, not the biggest ones

As Tyler’s profile grew, the opportunities did as well. In 2011, Tyler dropped “Yonkers.” The wild music video was a breakthrough sensation that took Odd Future to new heights.

It caught the attention of Rick Ross who wanted Tyler on Maybach Music Group. At the time, Rozay’s MMG crew was on top. The Miami rapper was dead set on growing the squad with the hottest artists possible. But Tyler didn’t even take his call.

Rick Ross called me out of nowhere and was like, “Yo, what’s up with Odd Future? I wanna talk to that Tyler kid. I want to sign him.” It was funny, ’cause when he called me, Tyler was actually in the store, standing next to me. So I was like, “Rick Ross wants to talk to you.” Tyler goes, “I don’t want to talk to Rick Ross.” I was like, “Dude, just fucking talk to him.” He was like, “Nah. I can’t talk right now.” So I didn’t put him on the phone.

If Tyler joined MMG, his popularity could have soared, but it also would have peaked early. And plus, can you imagine Tyler, The Creator suited up, mafioso style, rapping next to a Maybach?! Tyler eventually signed a distribution deal with Columbia Records, where he maintains control and his creative vision.

This mentality extended to his merch strategy. Here’s what Tyler said about Golf Wang in a Billboard interview:

“I don’t want it to be like fucking Rocawear or, I don’t know, a lot of things that come and go. That’s why I don’t give out free clothes to famous people. That actually could be the worst thing possible, if famous people wore Golf Wang.”

He doubled down on this in a Vogue interview when he said “…I’d rather sell 20 shirts to people who actually want it. I don’t ever want people over my brand like Ed Hardy or Von Dutch.”

According to Tyler, his Golf Wang apparel company made $17 million in revenue in 2018. It took seven years to get there, but the company’s seasonal drops continue to gain traction. The last place Tyler wants to see his clothes is on a TJ Maxx clearance rack—the home for once-popular brands that get too excited and flood the market.

Brands that rise and fall quickly don’t sell on loyalty, they sell on ephemeral popularity. Their customers buy because they want what’s “in,” not because of the brand itself. Meanwhile, lasting brands take time to build, but the rewards are often greater.

Tyler’s fashion shows are unlike any other fashion show. With people just wearing regular clothes?

Build the community, sell the lifestyle

With his engaged following, Tyler extended the brand quickly. In 2012, he started a show on Cartoon Network’s adult swim called Loiter Squad. That year he also launched his music festival, Camp Flog Gnaw Carnival. In 2013, Golf Wang had already teamed up with Vans. By then, Odd Future had already boosted Supreme’s popularity and had an informal relationship with the streetwear brand.

Tyler’s 2013 plan is an aspirational target that today’s artists still strive for. He had the content, production partnerships, in-person events, and merch. The only thing left was a podcast deal.

But unlike other artists, Tyler’s wasn’t driven by financial gain. He truly enjoys building stuff. “Rapping is so limiting,” he says. “I’m interested in everything,” he told LA Magazine. He’s hands-on with almost everything he does. He writes and produces most of his music. He designs his own clothes. It’s a difficult business to scale, but that’s not the point. His curiosity is a driving force to do what others won’t.

The first Camp Flog Gnaw Carnival only had 2,000 fans. Many musicians wouldn’t put that much work in for an event that could only gross around $100,000 in ticket revenue. But the small crowd was a blessing in disguise. Those attendees were fully decked out in Golf Wang apparel. They set the tone for a crowd that has steadily grown to nearly 50,000 fans.

Community-building is a hot topic for creators. One of the most common tips is to start with a small group, ensure that those members gain value, and slowly scale from there. Camp Flog Gnaw Carnival is a great case study for this.

In 2015, the festival to expand to multiple stages. The next year, it expanded to multiple days. In 2019, the community was powerful enough to boo Drake off the stage! It’s both ridiculous and impressive. Drake wouldn’t even get booed at a Kanye West concert, and Kanye can’t stand him.

Tyler’s fans don’t dislike the Toronto rapper. The crowd wanted Frank Ocean. They thought they were getting Frank Ocean. But the last thing that crowd wanted to hear was “Ratchet Happy Birthday.” It was a rough moment for Drake, but it speaks to what Tyler has built. 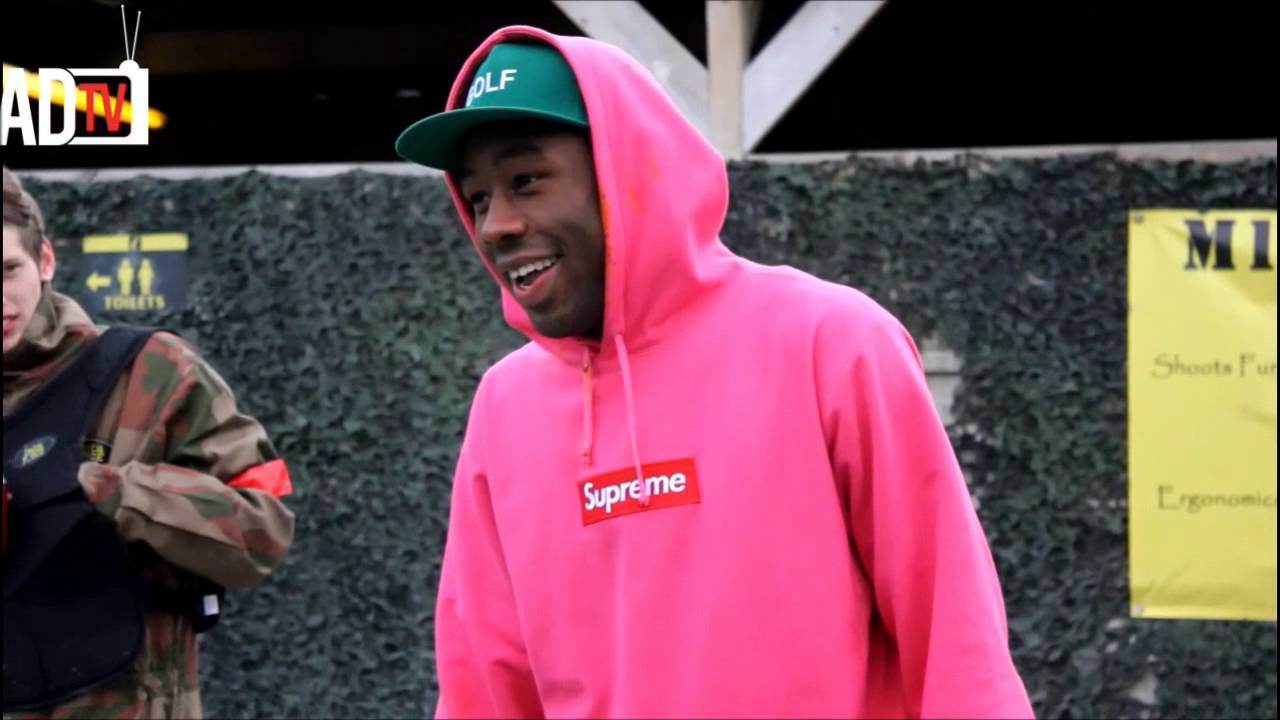 Brands like Supreme have benefited tremendously from Odd Future and Tyler’s strong fanbase.

Evolving to reach the next generation

As communities grow, they start to divide. In music, the split happens when day-ones separate from newer fans. For Tyler, the early signs came long before the success of his albums IGOR or Flower Boy.

In 2015, a since-deleted viral Reddit post titled “I’m done with Tyler,” complained that Tyler’s Cherry Bomb album moved away from the darker vibes from his earlier work. Tyler came back with a 900+ word response. He sympathized with fan’s relationship with 2011 Tyler, but stood behind his evolution:

“when you have a favorite artist, you tend to grasp onto an era, trust me i do that with artist that i love but i also know they grow and see new things and change and mature and all of that. im sorry that im not in the same place to talk about those things…”

Most artists would ignore haters or sic their fans on them. Tyler’s nuanced response helped bridge the divide. Sure, he’s lost some fans since the Odd Future mixtape days, but he’s still himself.

Now, he’s officially mainstream. He may hate that designation, but if he’s winning an award from The Wall Street Journal, he’s mainstream! This recent wave of success may seem like the antithesis of Odd Future, but it fulfills one of Tyler’s ultimate goals.

It’s still a piece of me that not only wants to be on the radio, but it’s probably some 11-year-old in the middle of fucking nowhere who might hear a song, look me up, get introduced to a whole world—and that could change everything he’s into for the rest of his life.

When Tyler was an 11-year-old in the middle of LA County, he looked up to Pharrell Williams and Andre 3000. Those guys changed him for the rest of his life. Tyler knows he’s in a position to do the same for others. Radio play is a vehicle to reach those 11-year-olds. So is performing at Madison Square Garden, performing at the Grammys, and everything in between. By extending his reach, he continues to grow the fanbase.

Unlike his peers, Tyler’s fans don’t have some cutesy name. They’re not the Ragers or the Barbz. Those are all clever tokens, but that stuff doesn’t make a fanbase.

The fanbase is made by the feeling it creates with the audience. Tylers fans have had that feeling for years, and that’s not changing anytime soon.