Artists waste tons of money when they cancel tours they had no chance of selling out. The impact will be worse when the pandemic is over. 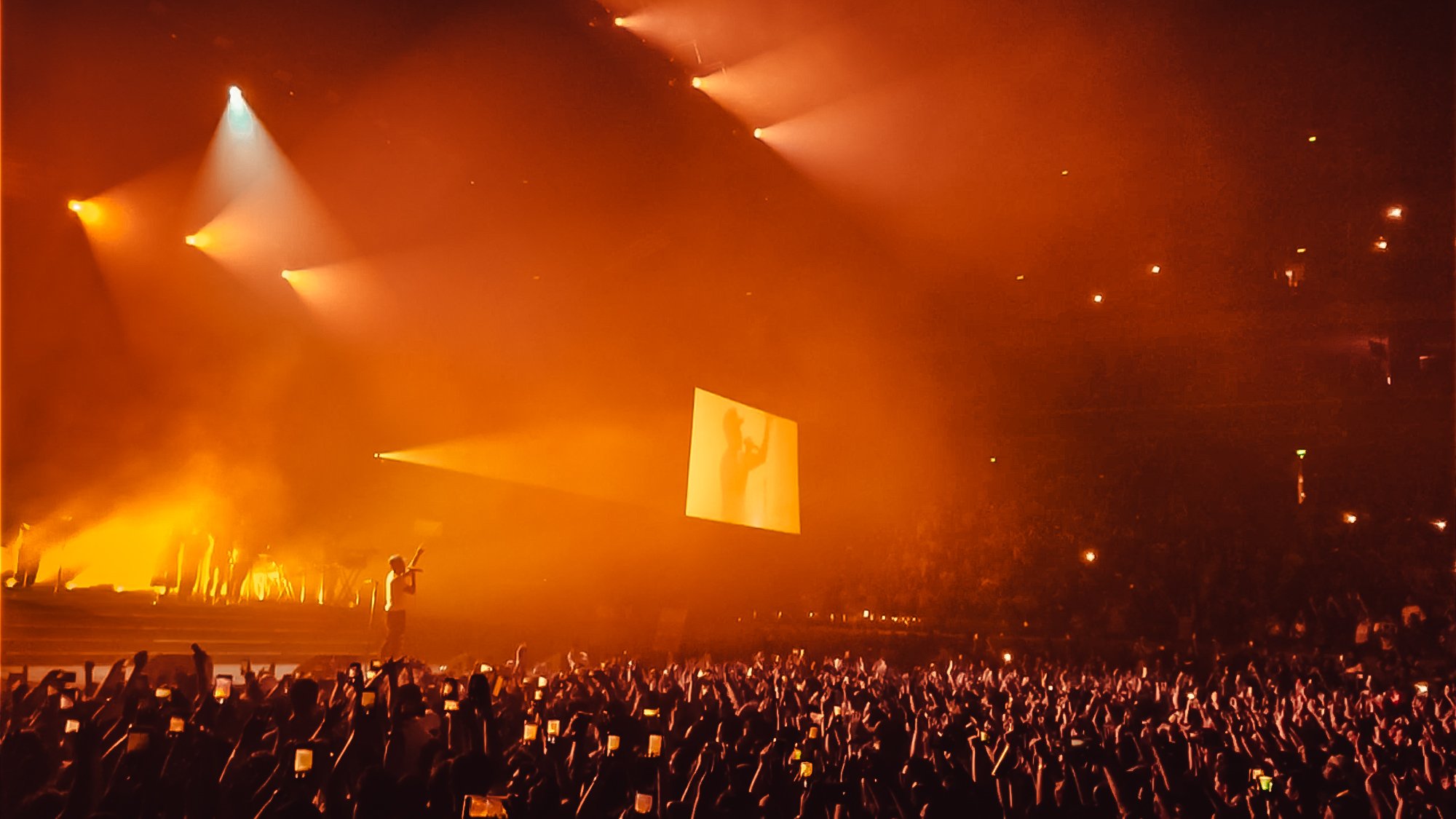 Hip-hop is full of underdogs who beat the odds. Each star was once an ambitious talent chasing an unlikely dream. If they had played it safe, they never would have made it.

That mentality is invaluable on the come-up. Ignoring critics is a damn-near superpower for the rising rapper. But on the come-down? It gets rough. Artists will book venues they can no longer fill and use valuable resources that could benefit others. Nobody wins.

That initial transition from the A-List to the B or C-List is tough. The audience starts to shift before the artist does. Sure, artists can “get over it” and lower expectations, but it’s a bit more complicated.

Decisions should be made on future expectations, not past performance

In recent years, several big-name artists have missed the mark. Chance the Rapper’s The Big Day (2019) couldn’t top the Billboard charts. He wanted to extend that 2016 Coloring Book run, but the fans weren’t having it. He canceled The Big Tour to “spend time with family.” Nicki Minaj’s Queen (2018) couldn’t keep up with Travis Scott’s merch bundles. The North American leg of her NickiHndrxx tour was inevitably postponed to “spend more time on rehearsal.” And earlier this year, Justin Bieber was out here begging fans to stream “Yummy” and still got beat by Roddy Ricch. His ambitious stadium tour was downgraded to arenas due to COVID-19 concerns (well before any lockdowns began).

The writing was on the wall for all three—they overestimated demand. Especially Bieber. Who told him he could tour in NFL stadiums??

If their tickets had sold, those cancellation excuses might have been overlooked. Not everyone is as straight up about these decisions as T-Pain.

Here’s what I wrote in December’s Chance the Rapper’s Canceled Tour is No Surprise. It applies to many artists in this situation:

How many of those acts can sell out a 36-show North American tour in 15,000-capacity arenas (which is what Chance the Rapper had planned for)? Drake, Post Malone, Kanye West, Dreamville (because of J. Cole) and maybe, MAYBE Tyler, the Creator in certain markets. Chance attempted to do something that most of the folks who outsold him can’t do either.

These cancellations may seem surprising since there’s a vast amount of data now available. No one expects a concert venue to optimize capacity like Delta Air Lines, but come on. This is still a business! The less variance, the better. These 15,000 capacity venues have the potential to gross $700,000 per night, but touring decisions get made like it’s Monopoly money. The opportunity cost per night is too high to be playing games.

Artists often take out cancellation insurance policies, which can cost up to 3% of the total insured amount. But that protection often leads to further risk-taking.

Nicki Minaj was quite upset with Billboard and other outlets that suggested she rescheduled her tour due to low ticket sales. (via Clevver News)

Taking a “step down” is still viewed as a risk

In January I wrote briefly about both Chance and Nicki in Hip-Hop Touring Business is Broken:

Keep in mind, Nicki spent the past decade silencing doubters who never thought a female rapper could reach the heights she did. Chance proved the industry wrong as an indie rapper who won Grammys and did arena tours. Their brand is to stay resilient when projections told them otherwise. You wanna go back in time and try to convince them that the lackluster responses to “Chun-Li” and “Groceries” were signs of what’s to come? Yea, good luck with that.

No one wants to admit that the best days are done. But in certain situations it’s more nuanced.

First, some can still sell at A-List levels when they’re a few years past their prime. Eminem’s Encore, Lil’ Wayne’s Tha Carter IV, 50 Cent’s Curtis are some of the best selling hip-hop albums. Each album dropped a couple of years after the artist’s peak popularity, but their post-prime was still higher than most other’s primes. More recently, A Tribe Called Quest’s We Got it From Here… was one of the highest-selling rap albums of 2016. And both Eminem and Lil’ Wayne have continued to sell well in recent years. If they had focused on how far off they were from their peak, they might have regretted it.

Second, albums and concert tickets track different types of demand. Album sales typically signal current popularity, while concert tickets signal legacy fandom. Even if an artist is past their peak popularity, they can sell tons of concert tickets if fans love their back catalog. But these album bundles have made it harder to distinguish live performance potential from temporary popularity. Despite the granularity of streaming data, it’s difficult to infer consumer behavior. The only reason Kenny Chesney can outsell Drake in 2020 is because of his concert ticket bundles.

Third, superstar artists careers can have several peaks and valleys. If Beyonce followed the standard career arc, then her lower-than-usual sales of 2011 album 4 would have signaled the start of her decline. Imagine if someone advised 2011 Beyonce that her best years were behind her?! That would have been worse than the infamous New York Times 2003 article Solo Beyonce, She’s No Ashanti.

When artists believe that their best years are past, they accept that those three instances can’t happen. It can easily be viewed as pessimism.

The pandemic makes it harder on the former superstars

We’re a long ways away from watching live performances in tightly-packed buildings. COVID-19 is as active as ever, especially in the U.S. But when concerts do return, the competition for venues will be intense. The last thing the industry needs is to fill its slate with artists that hope they can fill venues.

In March, comedian and Trapital Podcast guest Roy Wood Jr. wrote an article in Vulture on how stand-up comedians will get squeezed when comedy shows return. It also applies to musicians:

“As larger arena and theater acts cancel upcoming dates, they will be looking to reschedule in the fall, competing with one another and people already booked during that time frame. It’s very plausible that some of these theater acts will trickle down into the comedy clubs, which means if you’re a performer that’s getting canceled right now or set to perform at a comedy club in the fall, your dates may not be safe…

If you aren’t a weekend act that’s already selling tickets consistently, the clubs that are hurting in attendance over the next few months could find themselves in a position where it doesn’t make sense to pay you your full fee to come entertain 50 people in a room that seats 300. The fiscally smart thing for the club to do is cancel you and put some locals onstage that will work for less and need the money. No matter what level of comedy you’re at, whether you have dates or not, this shit ain’t safe.”

The competition for venues will be sky high in 2021 and 2022. The market may naturally sort out overly-ambitious artists. But the urgency and eagerness will be strong as ever. If an artist misses the mark in 2021, it might be a long time before they get back to where they want to.

“Past their prime” stars can still serve their diehard fans

Luckily, the live performance industry is broader than the standard North American concert tour. It can often be more lucrative too. Cardi B held off on touring for years because she made more money at music festivals. She also maintained flexibility.

This is where past-their-prime stars shine. They might have lost the Top 40 fans, but they still have the diehard ones. Instead of selling massive arena tours, they can do smaller, intimate shows where tickets cost more. These types of shows are normally reserved for Las Vegas residencies given the audience’s high discretionary income and the willingness to pay for extravagant production. But a lighter-scale model can work in Atlanta, DC, Houston, and other cities that are hip-hop hotbeds and popular destinations.

There have been one-off examples of this. After 2015’s To Pimp a Butterfly, Kendrick Lamar did a limited 10-city tour called King Kunta’s Groove Sessions. I saw him at the Fox Theater in Oakland, which holds under 3,000 people. K.dot could easily have performed at Oracle Arena and 35 other arenas like it in North America, but he chose not to. If 2015 Kendrick can take a step back, then the past-their-prime superstar can too.

The other option is to focus more on festivals, which have become the “gig-economy alternative” for many artists. Artists often get paid more per show, spend less on expenses. In exchange, they give up the security and direct connection with fans. The past-their-prime star might not get that valuable first or second-row placement on the festival poster, or a primetime performance slot, but a check is a check.

It’s been easier than ever for artists to connect with fans directly. Many rappers have shifted focus to maximize revenue with those who still love their work. That plays to the advantage of the past-their-prime stars. They can still succeed with different mentality.

Some will gladly make the shift. They have no choice. But others will struggle. There are egos involved, and plenty of artists still dream of selling out their hometown arena one more time. But some of those dreams will need to adjust, especially when pandemic is over.