Why Kanye West’s Gap Deal is a Risk to Yeezy

Yeezy’s new partnership with the struggling apparel company is a threat to the brand that Kanye West built. Listen to this essay here or on the Trapital Podcast:

Kanye West’s Gap deal has drawn a wide range of reactions. The College Dropout fans thought back to “Spaceships,” the 2004 song where the Chicago native complained about how his high school employer treated their “token blackie.” In recent years, Kanye has shared his desire to partner with the apparel company time, and time, and time again. This announcement is a full-circle moment.

But the hypebeasts that drove Yeezy’s popularity have less to be excited about. To them, the sneaker lost its allure as it slowly became a mass consumer product. The brand is a long way away from the infamously limited Yeezy Red Octobers.

The 43-year-old billionaire is up for the challenge though. The Yeezy-Gap partnership can fulfill his dream to bring fashion to the masses. But there’s risk in shifting the Yeezy brand downmarket with Gap. Even if the new product line makes money, its potential will be held back by a retailer whose best years are behind it.

A brand with something to prove

Yeezy’s first partner was Nike. It was a dream come true for Ye, who spent his childhood drawing Air Jordans because he couldn’t afford them.

Here’s a quote from Kanye from the first Nike-Yeezy press release in April 2009:

“Growing up, we looked forward to the release of new Nike’s the way we would an album by our favorite artist. So the opportunity to collaborate on a design with Mark Smith and Nike Design has been a dream come true, and a great experience.”

It’s rare to see Kanye say something this glowing about Nike, but it was all good just a decade ago! The first Air Yeezys retailed for $200, but sneakerheads resold them for thousands. Kanye saw the potential and wanted more.

He asked Nike for a Jordan Brand-type deal. Michael Jordan earns 5% royalties on sales from Jordan Brand, which made $3.1 billion in 2019. Nike told Kanye that royalty deals were only for athletes. Unsurprisingly, Ye wasn’t having it. In a 2013 interview with Hot 97, he said he told Nike that he was a performance athlete who “goes to The Garden and plays one-on no one.”

But regardless of Kanye’s athlete/non-athlete status, he lacked the leverage to negotiate. Sure, Air Yeezys were popular, but Nike thought he was just another rapper selling sneakers. It wasn’t an in-house brand like Air Jordan. The basketball legend’s royalty compensation was a tradeoff for ownership, and the incentive to succeed was greater.

Lack of leverage was an ongoing theme for Kanye back then. In 2013, he had similar struggles with LVMH CEO Bernard Arnault, who didn’t take the artist’s phone calls.

Here’s what I wrote last year in Why Rihanna Broke Barriers That Others Couldn’t:

Kanye might have been correct—as he’s since proven his talent with the Yeezy brand—but he had no leverage at the time. [LVMH CEO Bernard Arnault] was not scared of losing out on the Late Registration artist. Ye did not incite fear. Keep in mind, this was around the same time Kanye was riding in limos holding plates of food up for Paris fashion designers. He was hungry to get his foot in the door, but hunger can’t close deals.

Yeezy and Adidas both wanted the same thing

Adidas and Yeezy had a lengthy courting process in 2013, but it strengthened their bond. Kanye got the royalties, freedom, and expression that Nike never offered.

It was an ideal match with two partners who wanted more. Adidas had international reach but lacked North American relevance. The company tried to “buy” American culture with the 2006 Reebok acquisition, but culture doesn’t work like that. Meanwhile, Kanye West had a worldwide brand that needed distribution to match it. That mutual dependency made them stronger.

Kanye’s signing rode a wave of cultural resurgence for Adidas. Kanye’s signing came shortly after the introduction of the popular UltraBOOST sneakers, and the rise of Adidas athletes like James Harden, Aaron Rodgers, and Von Miller.

The Adidas-Yeezy partnership had a foundation, but the execution still mattered. Yeezy relied on hype, but Kanye’s end goal was to reach the masses. Here’s what he said to the New York Times in 2015 upon the release of the first Adidas Yeezys:

But West wants to design what might be called fast high fashion: clothes that are truly avant-garde in their design, made from the finest materials, and that would arrive with lightning-quick speed in stores where they could be bought by the public at affordable prices…

He claims that he’s not wearing luxury for luxury’s sake but rather as a form of research. “There’s a transition,” he says. “I need to partake in what’s of value and of quality and soul in order to understand it, in order to give it back.”

The limited sneaker releases worked to his advantage. Kanye had a testing ground for products with potential for bigger releases. The economics of fast fashion fit this creative process. It also grew tremendous demand with those who value scarcity.

But it created an intriguing dynamic. Yeezy’s supply steadily increased. It became the ninth-highest selling sneaker of 2018, more than Nike’s Air Force 1. It made $1.3 billion last year. These sneakers were no longer fast-fashion. They were widely accessible. It’s the type of item that a kid can put on his back-to-school list, and a parent has a real chance to get it.

The increased supply put sneakerheads—the same folks who drove Yeezy’s popularity—in a bind. They don’t gush over readily available products. The chase is part of the allure. On “All Falls Down,” Kanye rapped, “Then I spent 400 bucks on this. Just to be like ‘nigga you ain’t up on this.'” That mentality is etched in the brain of every Yeezy loyalist.

In fairness, most products have to evolve past the early adopters to reach bigger audiences, and those evolutions can frustrate early customers. But hype is different. The “evolution” is not a feature change, it’s an increase of supply. Adidas-Yeezy managed this well over the past five years. But Yeezy-Gap is a whole new beast. 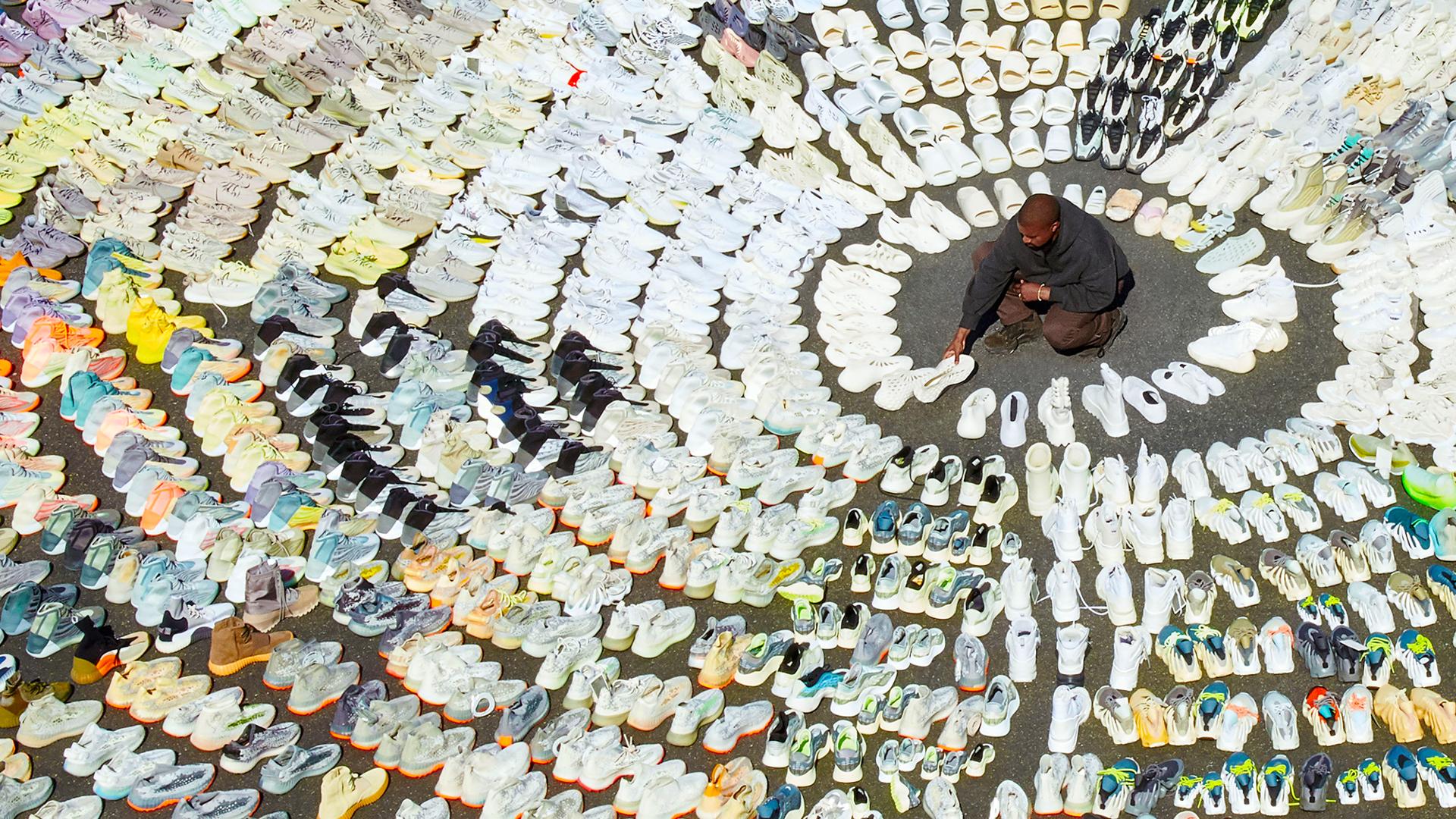 The ‘best-case scenario’ is still limited

In March 2020, Kanye was interview by the Wall Street Journal about his plan to make “the perfect hoodie”:

…it would be made for the masses, sold for $60 or so, folded and stacked on tables like loaves of bread.

West, who is 42, and his Yeezy label team hoped to sell [the perfect hoodie] somewhere like Costco, which he admires for its broad reach and its democratic piles of merchandise. “I like Costco as an idea. I like Walmart, too,” West says.

Gap is a perfect place for $60 hoodies stacked on tables like loaves of bread. The store was originally called “the Gap” because it served the gap between the fashion runways and department store apparel. But Gap is also a place where $60 hoodies get placed on 60% off clearance racks on Presidents Day Weekend, then get an additional 10% off if you sign up for a store credit card. Those discount-stacking tactics ain’t cuttin’ it for a modern brand like Yeezy.

Gap has steadily declined since the 90s. Old Navy and Athleta have literally carried Gap, Inc on their backs. Last year, Gap itself made $4.6 billion in sales. It hopes Kanye’s Yeezy line can bring in $1 billion annually by year five, similar to Yeezy’s success did with Adidas.

But Gap is not Adidas. The Three Stripes had a broader ecosystem that furthered Yeezy’s potential. NFL players wore Yeezy cleats in games. Adidas made its budget-friendly Yeezy look-alike Tubular sneakers, which drove demand without cheapening Yeezys. Gap is not in the best position to do that. It recently sunset its Hill City athleisure company and pulled out of its move to spin off Old Navy. It’s been a rough 2020 for Gap, even without the pandemic.

The best-case scenario for Kanye-Gap is a partnership like Martha Stewart and Kmart. Martha Stewart Living hit $1 billion in sales in its third year. But despite the success, it wasn’t enough for Kmart to avoid bankruptcy. At its best, Stewart extended the life of a department store that got trapped between Walmart, Target, and its never-ending Bluelight Specials.

Can Gap’s Yeezy line sell $1 billion by 2025? It’s an uphill battle, but not impossible. But can Yeezy turnaround the entire Gap Inc though?? In Kanye’s mind, this partnership is his Steve Jobs 1997 “return to Apple” moment. He admired Jobs’ ability to turn the company around, this is his chance to become the Steve Jobs of Gap. But the $60 perfect hoodie can’t match the impact of the iPod or the iPhone. Challenging the status quo has its limits, even for the Louis Vuitton Don.

But Yeezy’s Gap partnership flips this on its head. The billionaire founder has proved Yeezy can succeed. Customers aren’t as hungry as they once were. The only one “hungry” is the struggling retailer that hopes its former employee can turn the company around.

In Kanye West’s mind, he found a partner to make his ultimate dream come true. But maybe the real dream was the journey he took to get to this point.