How Hip-Hop Pushed Companies to Fight for Racial Justice

As hip-hop grew in power, it influenced those that profit off black culture to join the fight for justice.

We’ve been here before. We’ve mourned countless victims, donated to numerous causes, and marched in the streets. This time though, it feels different.

There has been welcomed support from surprising places. Sure, some of it is “slacktivism.” However, the call for change is stronger than it was in 2014.

Hip-hop has always spoken out on police brutality. But more businesses have partnered with hip-hop in recent years. Those companies have felt the pressure to contribute to the same culture that’s making them rich. It’s one of many factors that accelerated the shift in response to this crisis.

This may not be enough for the change that’s needed, but it’s a start.

The fight for existence is in hip-hop’s DNA

People often ask how hip-hop became the dominant culture. The internet is a common answer. It’s not wrong, but it’s reductive. The two main reasons are empowerment and social media.

Let’s start with empowerment. For years, hip-hop fought for its legitimacy. Melle Mel, Public Enemy, and N.W.A. depicted a life that was misrepresented by mainstream media. Their music vocalized black people’s fight for equity in America. As the artform grew in popularity, that fight drove the desire to call the shots.

In the 90s, Death Row, Cash Money, and No Limit made game-changing distribution deals with major record labels. That mentality extended to hip-hop partnerships and newly-launched companies across industries. They set the tone for a generation that wasn’t satisfied with a first-class ticket on the plane. They wanted to fly the plane themselves.

For instance, Jay Z built Roc Nation to make moves he couldn’t have done as Def Jam President. This past week, Roc Nation called on Minnesota Attorney General Keith Ellison to prosecute the four officers who murdered George Floyd. To honor Floyd, the entertainment company took out full-page ads in newspapers across the United States.

Social media accelerated hip-hop’s influence further. Artists could now directly connect with audiences. Their influence became quantifiable and public. There were fewer distributors to claim audience ownership, and fewer execs to “soften” their message. Artists grew their following through authenticity. With the rise of Black Twitter, black culture became the language of social media. The trend further accelerated in 2017 when hip-hop surpassed rock as the most popular genre of music. Companies took notice and wanted in.

It led to a wave of once-unlikely partners, like Tiffany & Co. In 2014, the jeweler was sued for patterns of racial bias. It had just one black employee in over 200 management roles and was accused of not believing that black people were appropriate ambassadors.

Four years later, the company made A$AP Ferg a brand ambassador. Yes, the same guy who made the aggressive, take-no-prisoners anthem “Plain Jane” became a spokesperson for one of the most storied luxury brands. And now in the wake of George Floyd, the company acknowledged it hasn’t done enough. It made a social media post in support of Black Lives Matter. Is it still enough? No, but it’s a tiny step.

This collective rise built leverage for hip-hop. For these partnerships to work well, companies have to show up. Their values should be aligned with the authentic artists they want to team up with.

Businesses felt pressure to support the culture they profit from

Social media makes it easy to call out culture vultures—those who profit off culture without contributing to it. If a clothing company promoted its “hot girl summer” line, the racial diversity of its board of directors and leadership team was fair game for criticism.

To be clear, the presence of black execs does not give companies a free pass. It’s like “having black friends.” It’s an acknowledgment, but meaningful action still needs to be taken.

This “cancel culture” trend may frustrate some, but it maintains accountability. Before social media, these inquiries were more likely to get ignored. But companies now face more pressure to stand with the culture they integrated into their business. Their customers will check the receipts and call them out if their actions don’t line up. 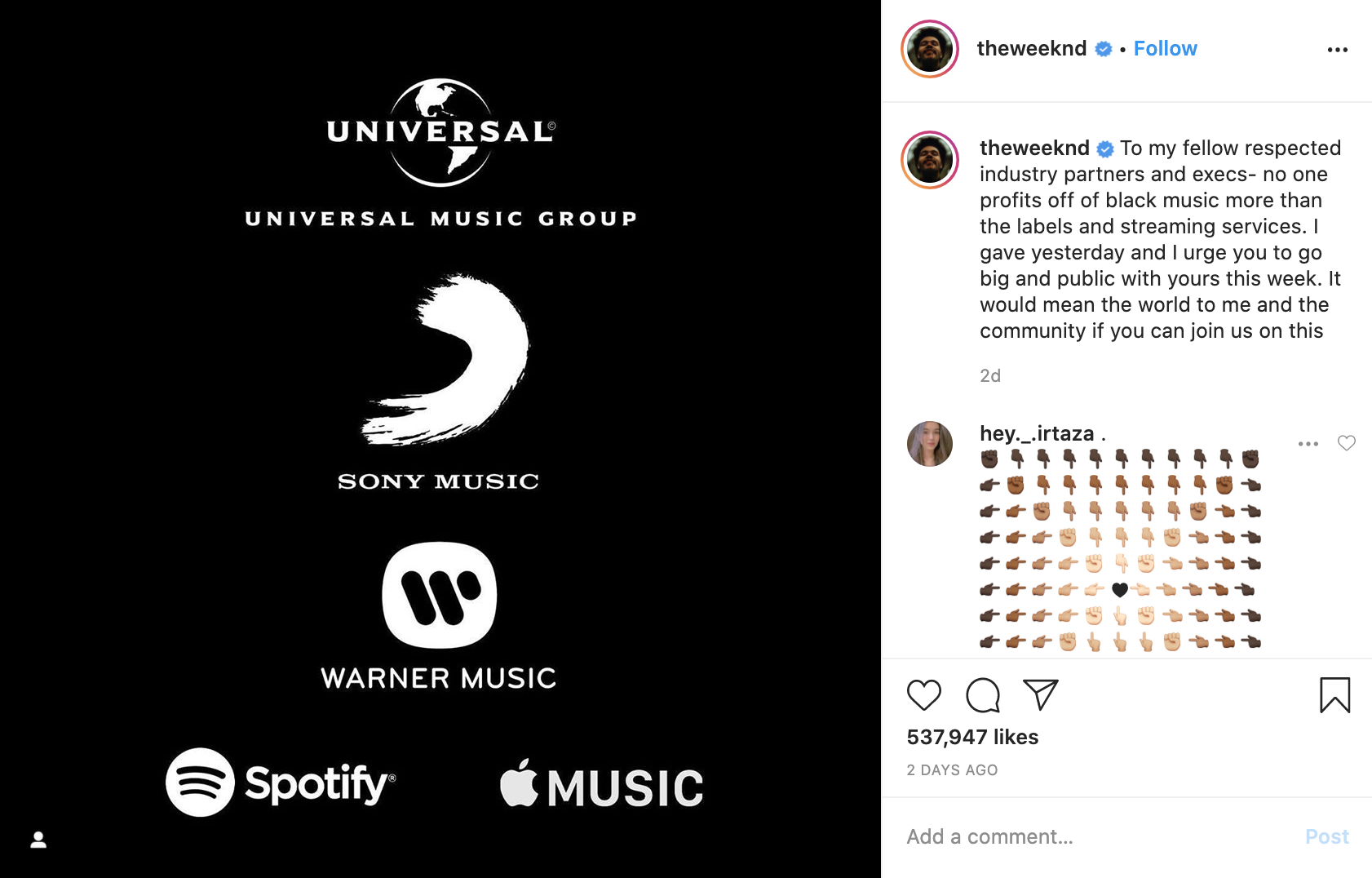 The Weeknd called out the major labels and streaming services.

Since George Floyd’s death, hip-hop has spoken loudly. I made the Hip -Hop Statements spreadsheet to highlight the artists who have protested, donated, and supported. J. Cole, Tory Lanez, and Lil’ Yachty have hit the streets in protest. Drake, The Weeknd, and Kanye West have put up big checks to various organizations. They’ve set an example for the companies that back them.

In that same spreadsheet, I also kept track of the music companies who have released PR statements. I distinguished the short-term donations from the long-term work that accelerates change.

Tiffani Ashley Bell, executive director of The Human Utility, coined the term “hire or wire.” If businesses want to make meaningful change, then hire black people in positions of influence or wire checks to fund their business endeavors. It was initially a call to action for tech leaders, but it also applies to the music industry where more black executives are needed at the top.

The goal is clear. Hip-hop wants to end to police brutality and racial injustice. The love for black people needs to be just as strong as the love for black culture. Each business has a role to play in that.

Will the necessary change happen? We’ll see, but we know what needs to be done.