Hey! I hope you enjoyed your weekend. It’s sad that we lost Little Richard, Andre Harrell, and Betty Wright. My thoughts are with their families and loved ones.

This morning I saw that only 40% of Americans plan to return to live events if a coronavirus vaccine is not available and only 5% would attend a live event right now. This supports what I wrote on Friday about the return of live music. I bet that those 40% and 5% numbers trend closely along with certain genres of music too.

Today’s update covers why leaks still happen today, how to best maximize leaks, and a reflection on RapCaviar’s influence in 2020.

In my recent update on Drake’s 2020 strategy, I failed to mention how his leaked music impacted his plans. Last week, the Toronto rapper chopped it up with Lil’ Wayne on Young Money Radio. He discussed how leaks impacted his decision to drop Dark Lane Demo Tapes:

“It was just a lot of joints that sort of were floating around. And then there was a couple of leak situations that happened a little early in the year. For a second the shit felt like ‘09 or 2010 or some shit. I couldn’t believe how much music was leaking. Not just from me, from every artist. It was like they were just back out here on some—you remember back in the day it was inevitable.”

It might seem shocking that leaks still happen in the digital streaming era. But when there’s a will, there’s a way.

In the 90s, 2000s, and early 2010s, music leaks were easy because physical copies were the main way that music was sold. Albums went to retailers early. All it took was one person at a warehouse to steal a copy and upload it to Limewire. (As someone who sold bootleg CDs at the time, I’m embarrassed to admit this, but I lived for moments like this).

In Lil’ Wayne’s case, all it took was one valet attendant to take his car for a minute, hear the music playing through the speakers, and take it before the car goes back to Wayne.

But in the digital era, leaks have evolved. Genius recently covered this in a short 4-minute video:

Cybersecurity makes a difference. It’s no surprise that Kanye, who revealed his iPhone password ‘000000’, had Yandhi leaked. He scrapped the project. It’s sad to say, but anyone without 1Password or similar password protection service is just asking to get hacked.

So how do artists respond? Drake tries to maximize the moment. His leaked tracks became music videos. His collection of leaked tracks became a mixtape. It might be easier for him to make lemonade out of lemons since he’s already a superstar. Other artists may continue to struggle though.

In January, The Guardian wrote about one of Playboi Carti’s recent leaks:

“Last year, a tune called Minute Maid appeared on YouTube and quickly racked up several million views, many fans hailing it as an instant classic. However, Playboi Carti had almost nothing to do with the song…Minute Maid is an example of a bizarre and engrossing new phenomenon in hip-hop: a work made not by the artist, but by one of their fans, and indistinguishable from the genuine article. Elements of tracks will leak from a studio session, usually via engineers or hangers-on, and these “snippets” of unfinished material make their way to listeners.”

The Atlanta rapper was frustrated, and rightfully so. It’s messed up, ruins the creative process, and costs him money.

But there’s a glass-half-full lens too. “Minute Maid” is a form of fan fiction. Carti’s fans cared enough to turn his unreleased music into a popular song. It’s user-generated content (UGC) that took off.

There’s a world where Playboi Carti empowers fans to lay his vocals on the best beat possible. The best song gets chosen for the album. It’s crowdsourcing 101. He could also remove the competition element and let fans have fun with it. Aspiring producers would love the opportunity to test their chops. Others would just have fun with it. Remember the “Coronavirus” Cardi B song? That was done by a DJ known for creating new songs from artist sound bites.

This is one of the reasons why gaming is so popular. In the Metaverse, players can create their own worlds. Those worlds are never as perfect as the professionally developed ones, but that doesn’t matter. It’s all about personalization and flexibility. It attracts hobbyists, amateurs, and budding professionals. It’s the same reason why fan fiction, homemade brewing, and other DIY activities are popular. Technology makes it easier than ever.

Today’s biggest artists have brands that are just as powerful as established companies. Their business ventures span as wide as a conglomerate. The next step is to become a “platform” that fans can build experiences on. TikTok, Vine, and other social media networks have opened the doors to what’s possible from a UGC perspective. The next level is to expand opportunities within music itself. it requires more work than a TikTok meme, but the rewards can be even greater.

A similar example is the NBA and its relationship with UGC. The league has embraced the social media era. Bleacher Report, House of Highlights, and other outlets run their highlight clips regularly. Those clips get turned into memes with graphics. Bleacher Report’s Instagram clips that put Russell Westbrook in the middle of a Game of Thrones battle is a form of fan fiction.

Artists don’t need to do this with every song. But the leaks are a great place to start. The track’s already out there, so what’s there to lose?

Is RapCaviar As Powerful As it Once Was?

Spotify’s flagship hip-hop playlist is five years old. By 2017, it was dubbed the new Hot 97. I’ve written favorable pieces on the playlist both here and here. But a lot has changed since then.

Here’s a Google Trends map that shows “rap caviar” over the past five years: 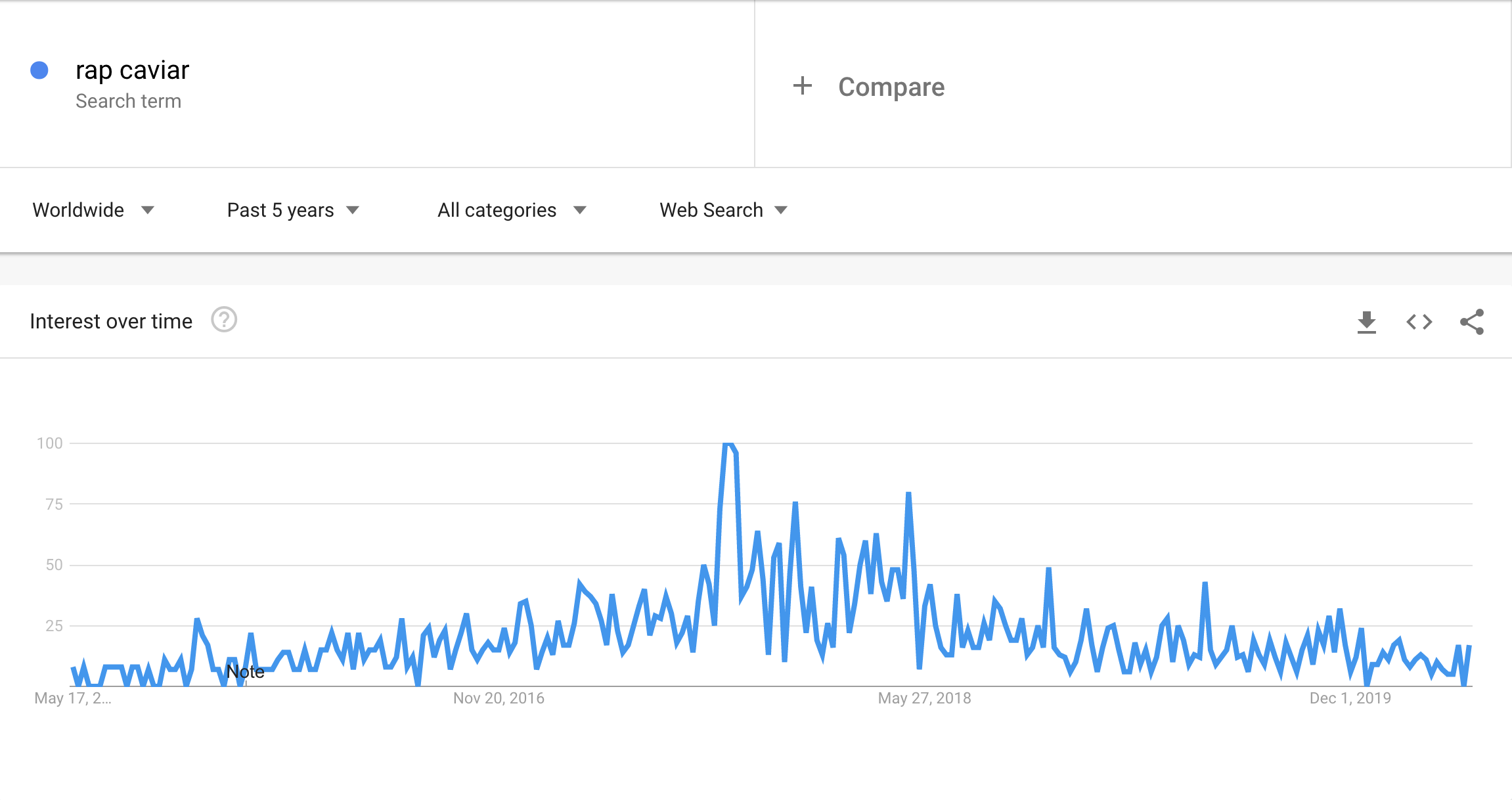 That ‘peak’ lines up with when hip-hop officially surpassed rock as the most consumed genre of music. There were tons of celebration and commentary that pegged that to the streaming era, Spotify, and its flagship playlist. It also lined up with the media coverage that RapCaviar and its playlist curator Tuma Basa had received. From 2017 until his departure in 2018, the flagship playlist received tremendous exposure, which fueled growth.

But the playlist growth has declined. In took less than 18 months to grow from 5 to 10 million. But in the 18 months since then, it has grown less than 3 million. As Spotify’s U.S. market saturates, growth has shifted to music and podcasting. There’s less of a need to invest heavily in the playlist.

In 2018 Goldman Sachs interview, media mogul Peter Chernin spoke about the challenge of algorithms with regards to Netflix:

“I’d be curious how many people have ever watched something because Netflix recommended it algorithmically. I don’t think it happens that often… It’s mostly word of mouth or your friends have told you, but there’s gotta be a better way to give consumers information and curation to what they want to watch at any given time. And I think it’s a big chokepoint in the entire industry.”

That chokepoint is stronger with video content, but a less-pronounced version still exists in music. People don’t listen to albums because of algorithms. Even Drake, who has been over-indexed on streaming services, would still get the same number of streams even if his new music wasn’t heavily pushed by Spotify.

Have a good week! Congrats to Doja Cat, Megan Thee Stallion, Beyonce, and Nicki Minaj for topping the Billboard Top 100. First time that four black women have topped the charts. History in the making.