Indie Artists Will Need Help to Bounce Back

It’s a grim time for many musicians. On Friday, the Freelancers Union shared some troubling stats:

Over the last week, 2,767 Freelancers Union members answered a survey to tell us about their struggles with these broken systems. The results are shocking: 84% of freelancers who had applied for government relief had not yet received any money.

Two-thirds (66%) of our respondents had already lost more than $5,000 in income, and almost all of them (86%) had applied for at least one from the list of PUA, PPP, EIDL, or the Self-Employment Assistance Program…

One-quarter (25%) of our respondents had spent more than 20 hours researching and filling out applications for relief funding. More than half of them (58%) received confusing or incorrect instructions on what to do, while dealing with broken web systems (56%) and unresponsive phone lines (45%).

Unfortunately, many of the resources to help have dried up. MusiCares reported that its $14 million COVID-19 Relief Fund has depleted. The first round of PPP loans went to a lot of big organizations like the Los Angeles Lakers and Shake Shack while smaller businesses were left out. And the EIDL only went to 9% of businesses that applied.

The outlook is dim, and the next few months might be devastating. From CNBC:

Sole proprietorships that represent 81% of all small businesses in America is a group particularly hard hit in this credit crunch… According to the survey, 31% can operate only a few months or less, 7% less than a month and 6% less than a week under the current economic lockdown conditions.

Many musicians are sole proprietors, so it’s tough. Their ecosystem has suffered too. Small venues, promoters, and ticketing companies have faced similar struggles. It’s a chain reaction that will take time to recover. Missouri is the first state to give concerts the green light, but I don’t expect many musicians or their fans to jump at the opportunity.

These smaller indie acts face the most uncertainty. As I’ve said before, I’m not concerned about Taylor Swift canceling Lover Fest or Drake not touring after his album drops. I’m concerned for the acts who can’t last a few months (or year) without income. They’ll be forced into alternative forms of work or remain underemployed until the virus passes.

Several of the big stars and companies have donated their money to great causes to help. Post Malone’s Nirvana livestream raised more than $4 million for WHO. Rihanna donated to a foundation supporting WHO and other organizations. Cardi B teamed up with Fashion Nova to give money directly to those impacted. Cash App has been active as ever. SoundCloud and Pharrell came together to support Sweet Relief and Help Musician charities.

There’s a long list of companies and artists helping in a position to do so, which is great. But I’m still uncertain. Sadly, the roots of this industry may look a lot different in twelve months.

After a brief delay, IFPI’s annual Global Music Report is out. Here are some of its headline stats:

Streaming revenue grew by 22.9% to US$11.4 billion and for the first time accounted for more than half (56.1%) of global recorded music revenue…

This growth was driven by a 24.1% increase in paid subscription streaming with nearly all markets reporting growth in this area. There were 341 million users of paid streaming services at the end of 2019 (+33.5%), with paid streaming accounting for 42% of total recorded music revenue. 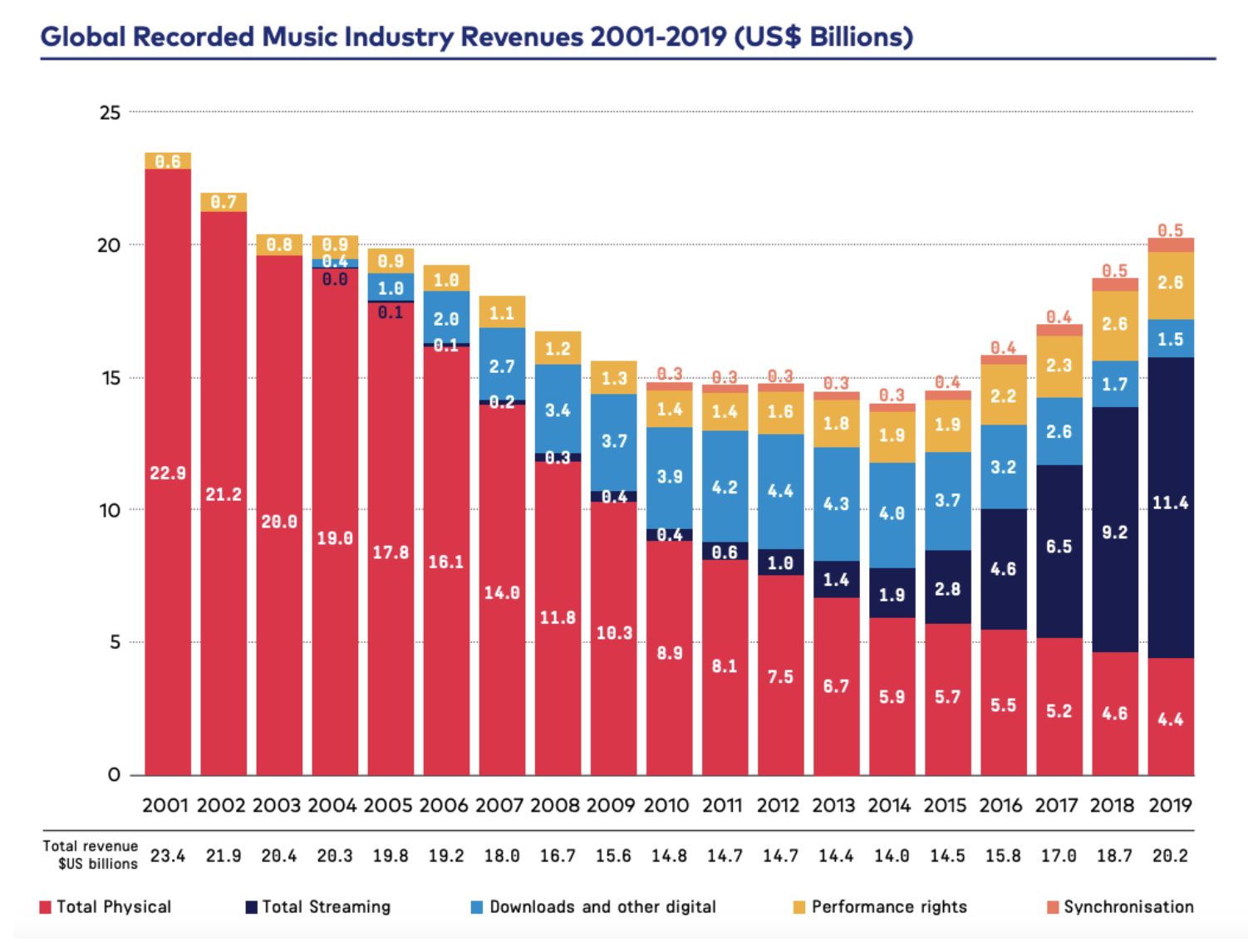 There are several interesting regional trends too:

US & Canada grew by 10.4%, remaining the largest region for recorded music revenues, accounting for 39.1% of the global market.

Here are my biggest takeaways:

IFPI was already bracing for next year’s results which will be impacted by COVID-19. Recorded music growth will likely decelerate given the outbreak. But there could also be an accelerated shift toward streaming music, especially if artists continue to drop music. If massive artists like Drake, Rihanna, and Beyonce deliver music this year (as many expect) it would draw in listeners and influence other musicians to do the same.

Note – MIDIA released its global music report a few months ago with similar results to IFPI.

In March, SoundCloud and Twitch made one of the first business development moves to make it easier for artists to monetize during the pandemic. Today, the two companies have come together again for original content.

Music streaming service Soundcloud is capitalizing on consumer demand for live entertainment amid the COVID-19 quarantine with the launch of its own slate of originally produced live programming. The company today announced its plans for a new Twitch channel where it will air live chat series and other panel conversations plus music sets, and shows focused on music discovery. The programming will feature artists, producers and other industry experts in an effort appeal to both music creators and fans alike.

While the company has offered other music discovery and creator resources in the past, this is the first time it’s offered live video and a way to interact with the music community in real-time, as it will by way of Twitch’s built-in chat.

This move makes sense, but I’m surprised SoundCloud didn’t do this years ago. The platform has always been a hub for creators to push their content. The rising acts on SoundCloud often got featured on playlists, creator lounges, and other events that the DSP put on. A series with these acts was the next logical step. But like many things, COVID-19 has accelerated the timeline for items that were already on the roadmap. 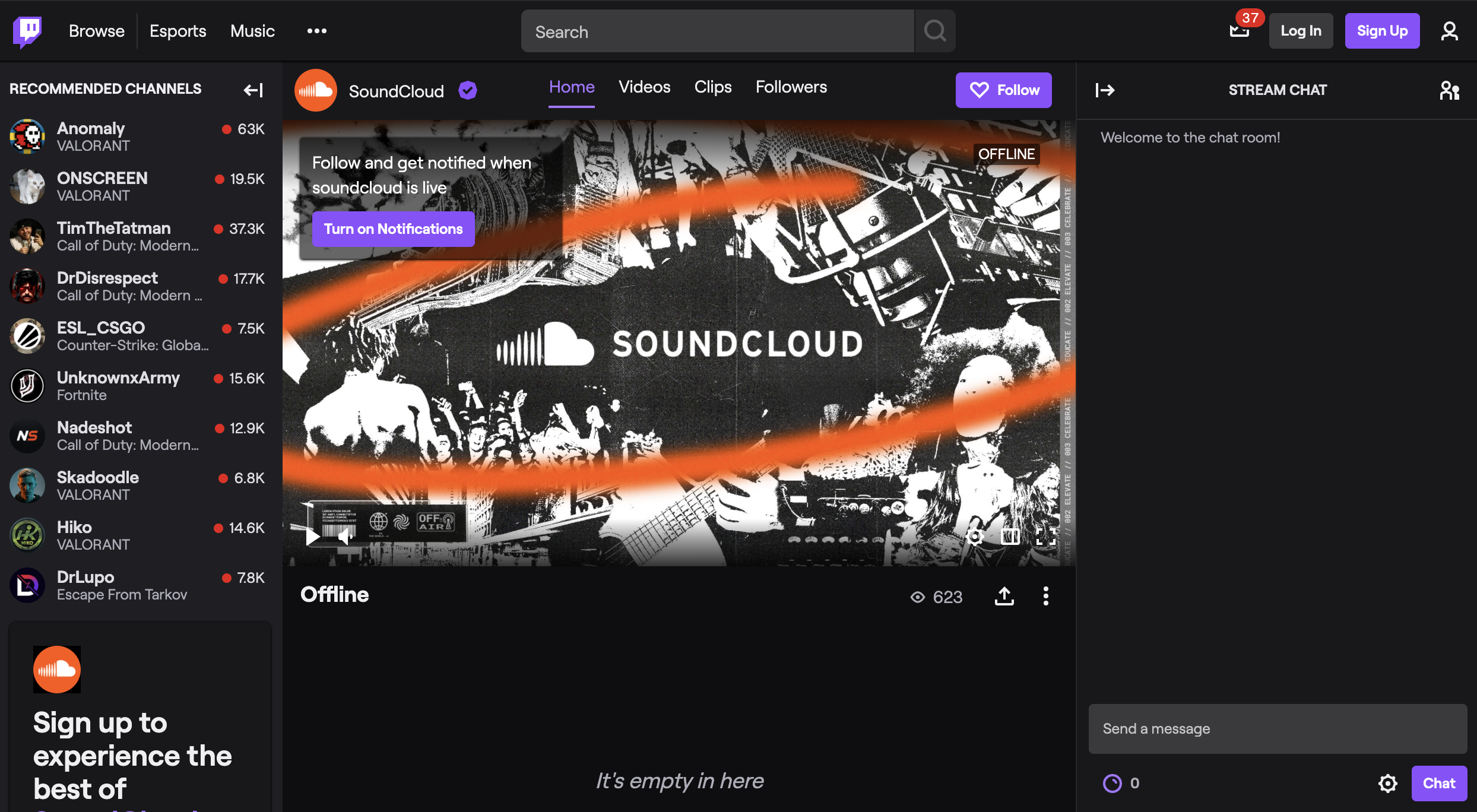 If these two shows work well, there’s a path for future programming. SoundCloud has a strong bench of “alumni” artists who could come back from different types of virtual events. Artists like Kehlani, Chance the Rapper, and Lil’ Uzi Vert would be a huge draw. The infrastructure is there to make it happen.