The Insecure star used modern tactics to grow her audience and made timeless moves to build synergies across her businesses.

After an 18-month break, Insecure is back. Issa Rae needed that time off to live life. “Insecure takes nine months out of my life. I’m pulling from life experience, and if you’re not living, then what are you really making?” the 35-year-old recently told Teen Vogue.

Her break also included four movies, a newly-launched record label, a coffee shop in Inglewood, and more projects on the way. The multi-hyphenate shows no signs of slowing down.

Issa says she models herself after Oprah, Diddy, and Ellen. But those three came up in a different time. Some of their tactics aren’t relevant for Issa, who got her start on the internet. She developed her own playbook, but still learned from those who came before. Her journey is more relatable for the rising media mogul.

In 2007, Issa launched Dorm Diaries: a YouTube series on black life at Stanford University. To get the word out, she used Facebook to create groups and add new friends. The social network had just expanded to let anyone become a user. While many of us frantically hid our profiles from potential employers, Issa went all the way in.

Here’s her quote from a 2015 documentary short:

“It started with Facebook randomly, trying to add friends. When they opened it up to the world I was like “Oh my gosh I’m gonna add all the Senegalese people.” Cause there’s like three last names, all I have to do is type the last names. And that was like a community, an African community where we can share stuff amongst each other.

Three shows down the line when I launched Awkward Black Girl, I already had a fanbase from the other two shows. I really learned from my mistakes, learned what people wanted to see, then studied the analytics. By the time that show came out, there was an audience. It wasn’t huge or anything, but it was enough for them to share with their friends, and they would share with their friends.”

She kept that same energy as other platforms got hot. Her friends made fun of her for saying, “You need to get on Snapchat!” (as someone who STILL gets dragged for hyping up Google+ back in 2011, I can relate.) But that mentality made the difference.

Awkward Black Girl took off because of its strong base and word of mouth. Issa launched a Kickstarter for season 2. She nearly doubled her $30,000 goal. Those who donated got different levels of rewards and recognition for contributing.

Those grassroots, community-building tactics are needed when moving outside the mainstream. When Peleton first launched, many were put off by the stationary bike’s $2,000 price tag. But its moderated Facebook community built confidence with prospective buyers. Customers shared photos and stories, which boosted sales. The public group now has over 270,000 members.

Similarly, Issa’s Facebook groups brought together awkward black folks from all walks of life. Her content attracts those who can watch her show and say “YES! That’s def me.” Her audience is used to being the only ones in the room. Bringing these folks together enhances the experience. Issa’s official Facebook page now has over 250,000 fans.

Season 2 of Awkward Black Girl was distributed by Pharrell Williams’ I Am OTHER. Major networks started to pay attention, but they tried to make it something it wasn’t.

To Rae’s disappointment, most wanted to completely rework [Awkward Black Girl]. Rae recalls a phone conversation with a network executive who wanted to make it into a pan-racial franchise operation, starting with ‘‘Awkward Indian Boy.’’ Another suggested Rae recast the lead with a lighter-skinned actress with long, straight hair — in essence, the exact opposite of Rae. She turned down the offers.

Sure, some compromise is given when dealing with major networks. But those changes would have ruined it. True Awkward Black Girl fans would have been lashed out at a lighter-skinned recast or pan-racial franchises (and rightfully so).

This journey is far too familiar. It’s like a startup raising capital. The earlier the young company hops on the VC treadmill, the more likely it is to prioritize the VC’s goals over theirs. It’s true in music too. When artists sign early deals with record labels, they give up more control.

Issa built up her leverage. When HBO came around in 2013, it took some time but they got it right. Now, anyone who’s seen both Awkward Black Girl and Insecure can see the differences. The premium cable show has more sex appeal than Awkward Black Girl ever had. It’s HBO, what did we expect? But despite the glamour and glitz, the show maintains its awkward-as-hell identity.

Issa doesn’t own Insecure, HBO does. But she uses its intellectual property for a growing number of ventures. There are four key areas.

First, she uses Patreon to hosts behind the scenes interviews with Insecure cast members. She also grants exclusive access to events and offers other perks. That Patreon revenue is used to support other diverse and talented creators.

This challenges a misconception on Patreon. It’s often viewed as a donation platform for budding creators. But why should creators leave Patreon after they break out? Sure, Issa no longer needs that revenue to live life. But it’s more valuable to shift it to initiatives or philanthropic efforts that fans value. Otherwise, it’s harder to convene these passionate customers.

In my Tyler Perry article, I wrote about why he still performs his Madea plays on stage. He no longer needs that money, but the live audience is a testing ground for content that may make one of his movies. It’s also a way to serve those who supported him before he broke out.

Second, she teamed up with Atlantic Records to launch her Raedio record label. The artists she signs will likely get their music played in Insecure and Issa’s other digital properties. Raedio recently acquired a music supervision company to oversee the use of music in both film and TV. Raedio also partnered with Kobalt to collect publishing revenue and manage its library. Kobalt exec Jeannette Perez said it’s the first time they’ve worked with someone who bridges all her companies together.

Third, she has an upcoming show on HBO Max called Rap Sh*t. It follows a fictional South-Florida-based female rap group trying to break out. All these initiatives start to converge. Here’s what I wrote in November in a Trapital Member Update:

If we connect the logical dots here, the rap group in Rap Sh*t will get signed to Raedio at some point in the show. The songs they release during the show will be featured as standalone singles available to stream everywhere. It reminds me of Gimlet Media’s StartUp—the company’s first podcast, which focused on the process of starting Gimlet Media. Very meta, but effective when done right.

Fourth, she’s launching a new mobile game, Insecure: The Come Up. Fans of the TV show can bring the game to life as Insecure animated figures. They’ll be able to unlock parts of Los Angeles, improve their community, and get involved in all the uncomfortable situations they desire.

It’s quickly become an entertainment universe! Each business reinforces another. Here’s what her synergy map looks like: 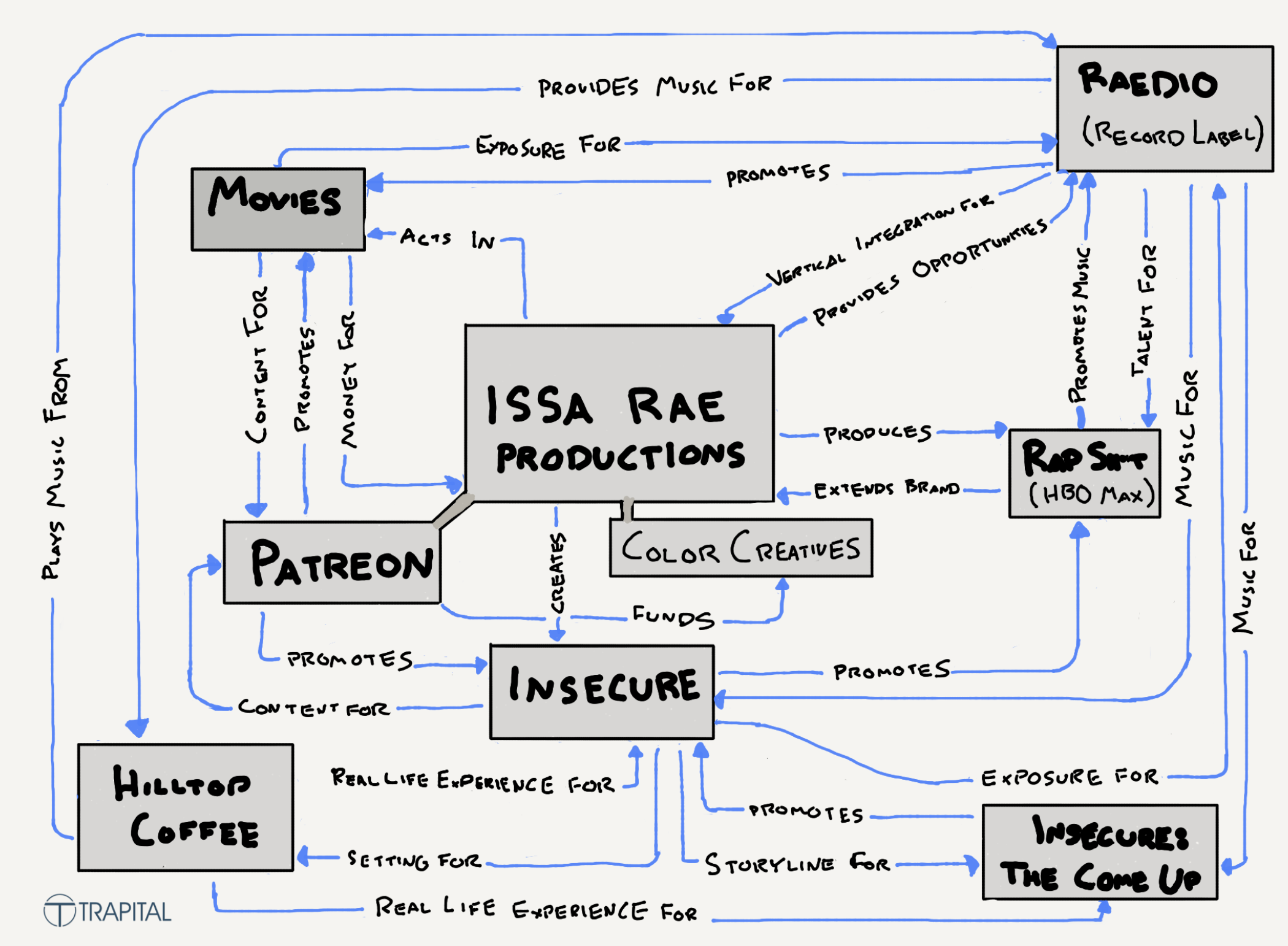 If this looks familiar, it should. It’s similar to Walt Disney’s synergy map from the 1950s. It’s been the blueprint of Disney’s strategy for decades.

Back then, this strategy was limited to those with deep pockets, tremendous clout, and unlimited access. But today, it’s easier to execute on a smaller scale.

Issa’s goal from the jump has been to put on for other diverse creators. One of her favorite bars is Jay Z’s verse in Drake’s song “Pound Cake“:

Here’s her quote from a Forbes interview:

“That pound cake verse that Jay Z has where he talks about how his associates have made billions because he’s paved the way for them is “goals” for me. It’s not even from a monetary perspective; it’s really about ownership.”

Those associates are the folks on her direct team. They’re also the diverse talent who will benefit from her programs. They’re the record label signees. The list will continue to grow.