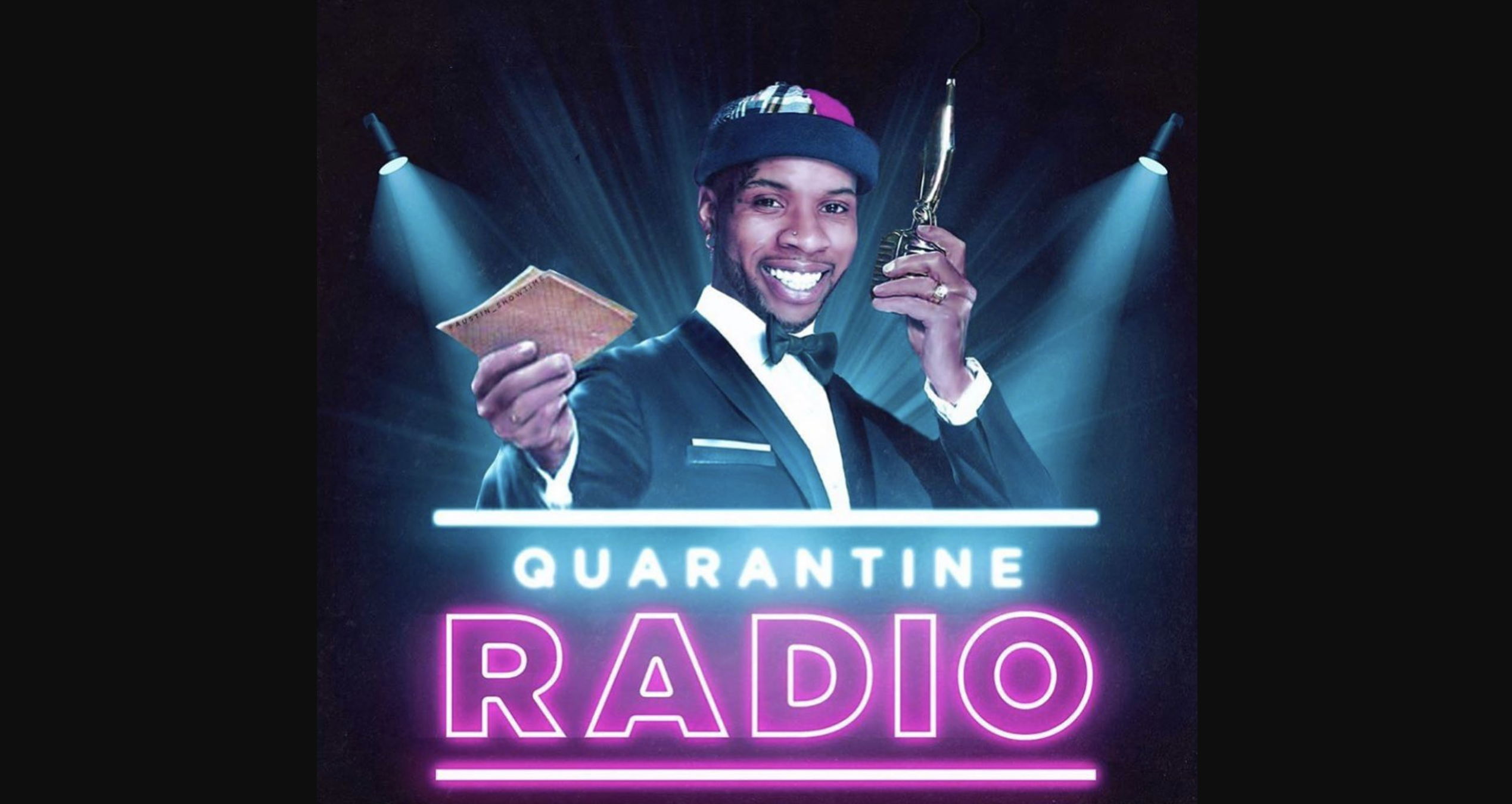 DJ D-Nice’s Instagram Live sets have inspired a wave of entertaining content. At this moment, Tory Lanez is likely prepping for the next Quarantine Radio. The 27-year-old artist broke viewership records with his twerk-streams and wild commentary. Meanwhile, mega-producers Swizz Beatz and Timbaland have pushed an idea they’ve sat on for years. Their Verzuz DJ battle series have hip-hop fans begging for dream matchups with their favorite beatmakers. These livestream sessions have been silver linings in an otherwise scary time.

If this relationship between artist and social media platform feels familiar, it should. Hip-hop artists often become social media sensations. We’ve seen DJ Khaled on Snapchat, Lil’ Nas X on TikTok, and plenty of others. Their popularity drives growth on the platform, which influences how those networks evolve. It’s a chicken-and-egg dynamic.

But that growth comes with tradeoffs for both artists and platforms. “Saying no” is just as important as “saying yes.”

Instagram’s goal is simple. The ten-year-old app wants to maximize this opportunity. In the unwritten rules of social media, networks get one moment like this if they’re lucky. Live’s features are designed to drive more engagement between creators and fans. Engagement can be monetization, improved experience, commerce-related partnerships, and more. Some of this work is already in effect.

IG Live wasn’t built with Quarantine Radio in mind (clearly). There are stronger products that can serve these artists. But those services can’t match Instagram’s massive reach.

Here’s what I wrote in a recent Trapital Member Update:

Live’s strength is its massive audience of 500 million daily active users….[Twitch] is much better built for this moment though, especially with its SoundCloud integration. The challenge, still, is its niche positioning. Twitch has 15 million DAUs and its gaming-focused brand are still an uphill battle for creators to climb. Twitch may have a superior product, but it’s more important to have the “good enough” product and strong distribution. Live is better positioned than anyone to get there.

The same is true in other mediums. Spotify does not have the best audio quality. Netflix does not have the best content. But those streaming services are on top because of scale. Instagram Live’s journey to hip-hop stardom is far more coincidental, but the infrastructure was in place to attract the audience. And that audience is now more engaged than ever.

For better or worse, Instagram will have time to reap these rewards. Social distancing measures will be in effect for the foreseeable future. If there are no concerts in New York or Los Angeles until 2021, then there’s plenty of time for Tory Lanez and his hype man to perfect their ad-libs.

IG is now in the driver’s seat, but its journey will have its challenges.

If you’ve never seen Quarantine Radio, this clip should give you an idea.

For most artists, Instagram is for marketing and influencing. But distribution may be on the way. Some of this already happens. On Verzuz, several DJs have teased unreleased tracks. Eventually, Instagram will have to revisit its music licensing agreements. IG wants to best support creators. It will need to ensure that those creators and their partners earn their fair share.

“The fact that most people who are scrambling to livestream are probably not clearing their performances beforehand potentially leaves a lot of money on the table for music rights holders — including the artists themselves, not just labels, publishers or performing rights organizations (PROs). Moreover, none of the open livestreaming platforms that are popular today (Instagram, Twitch, Facebook, YouTube, etc.) have the proper legal infrastructure to close that financial gap yet.”

Artists, labels, and producers may take an L because Instagram doesn’t have these licenses in place. It may take time to clear.

There’s a delicate balance. The platform still needs to serve its regular consumers and other businesses outside of music. There’s danger in doubling-down too hard. Past networks have leaned too heavily on opportunities in music and rode them into the ground.

In the late 2000s, Myspace became a strong distribution channel for musicians. 50 Cent and Soulja Boy gained traction on the yesteryear platform. Myspace had a record label and had dreams of becoming a strong digital streaming provider.

In 2008, there was a rumored $300 million 360 deal on the table between 50 Cent and Myspace. It was twice the size of Jay Z’s 2008 Live Nation deal. Remember, this was a year after Curtis got outsold by Kanye West’s Graduation in its head-to-head matchup. We had a tell-tale sign that 50’s music prime was done. But Myspace had its oversized check ready. It was like New York Knicks owner James Dolan preparing to sign an aging NBA superstar to a nine-figure contract. But this time, the deal never went through.

Instagram’s scale and breadth are much broader than Myspace was. It’s unlikely to make that same mistake. But we’re a few months away from reckless news headlines asking, “Should Instagram become a record label?” The answer is no. A narrow scope is important, even for a platform with 1 billion monthly active users.

Become part of the ecosystem (not THE ecosystem)

The landscape is too fragmented for Instagram to succeed on all potential fronts. It would be a mistake to try and do so. Enhancements should focus on strengths, not weaknesses.

Instagram Live’s strengths are scale, low friction, and high engagement. According to Vishal Shah, IG’s VP of Product, the company is considering several more options to improve the experience. Gift cards and virtual gifts are obvious routes. But artists would love to sell merchandise through livestreams. More specifically, bundled merchandise to drive album sales. To be clear, digital music does not need to be sold on Instagram. The IG purchase can include a redeemable code to download the album on the artist’s website or a digital streaming provider.

Can you imagine if Travis Scott sold Astroworld bundles through IG Live? Between him and Kylie Jenner, they might have broken a few Billboard records.

Instagram’s weaker areas are its performance and range of functions. Swizz Beatz Verzuz series is fine in its current form. The Ruff Ryders producer has not monetized it and doesn’t plan to anytime soon. But when he does, there are other platforms built to make it possible. Caffeine is already a livestream hub with experience in emcee battles. A partnership with Swizz could go a long way. The same is true with Twitch and other livestreaming services. Verzuz would lose out on Instagram’s scale, but the audience for a RZA vs DJ Premier battle is a more devoted group of fans than someone popping into Quarantine Radio or D-Nice’s set. That devoted audience is more likely to switch platforms for an improved experience. These fans are also more likely to support direct monetization.

The artists winning on Instagram Live are still subject to its social media algorithms. The direct audience connection is limited. Sure, artists can plug their email newsletters or Community numbers to build 1-1 connections. But it’s not in Instagram’s best interest to support this since those relationships can happen outside the platform. It’s another reason why artists should use Instagram as a tool, but not the tool.

IG is still a great testing ground for minimum viable products. Strong content can use Instagram as a launchpad for bigger deals or stay on Instagram and maintain its strength. That’s what makes YouTube successful. It’s built for Issa Rae’s Awkward Black Girl YouTube series to led to HBO’s Insecure. It also built for Complex’s Hot Ones to stay on YouTube and be successful. Quarantine Radio is built for IG, but Verzuz may have greener pastures. That optionality will serve IG Live well.

It’s exciting to think about the artists studying Quarantine Radio and Verzuz. They are preparing to launch their own version. But even as they test it out, their decisions will matter. As Instagram Live explores its options and determines the best past forward, artists should do the same.