A few things have changed since Trapital first made the Beyoncé sales funnel and assessed her streaming strategy, but a lot has stayed the same. 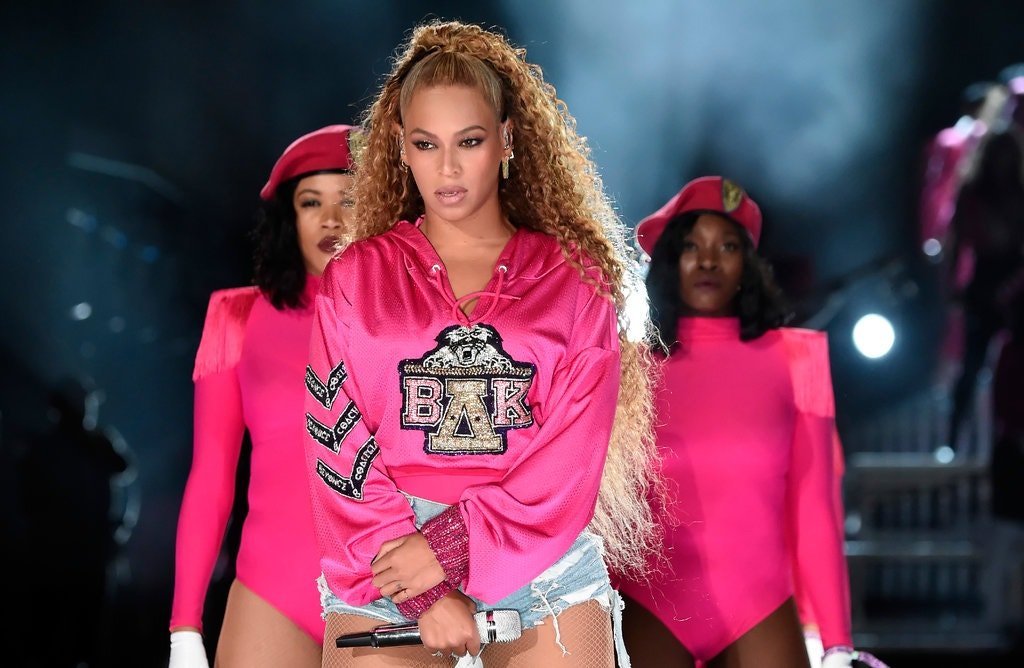 Here’s are the key points:

A lot of people were surprised that Beyoncé’s Homecoming documentary went to Netflix… Despite her ownership stake in Tidal, the “Formation” singer chose Netflix because it falls in line with her broader strategy.

Let’s assume Netflix paid $30 million total to produce and market Homecoming. According to the Financial Times, Netflix’s customer lifetime value is just under $200. A 3:1 ratio of ‘lifetime value’ to ‘customer acquisition cost’ is a common target in tech. If Netflix wants Homecoming to meet that, the documentary needs to bring in (or maintain) 450,000 subscribers to justify the $30 million it spent.

Netflix’s 140 million subscribers (and the millions more y’all who log in with your friend’s cousin’s account) are another reason why Beyoncé chose Netflix. It’s a great way to reach casual fans.

If the documentary resonates with this casual audience, they will move further through Beyoncé’s sales funnel. They will be more willing to attend her next concert, buy Ivy Park merchandise, and subscribe to Tidal. Beyoncé would have lost out on the opportunity to convert casual fans if Homecoming was exclusively on Tidal—which serves an audience that’s already bought in.

Everything Is Love and Homecoming: The Live Album are on Spotify for the same reason Homecoming is on Netflix. It’s a gateway to the casual audience…

Tidal may not have started as a segmentation tool for Beyoncé, but it ultimately became one. At the moment, current subscribers might be annoyed that Homecoming and its live album weren’t exclusive theirs. But they shouldn’t worry. The album they really want should be on its way.

A lot of that still holds up, but a lot has changed!

Not all customers are valued the same

For starters, we now have some stats. Beyoncé and Netflix agreed to a reported $60 million, three-project deal. That prices Homecoming at $20 million. Let’s assume Netflix spent $5 million on marketing. That $25 million spend is a bargain for a show that drew in 1.1 million viewers on its first day. That puts the documentary in a special group of Netflix mega-hits like Bird Box, Bright, Tiger King, and The Irishman (but on a much cheaper budget).

Homecoming also set a record for black audience viewership. On its premiere day, 63% of its viewers were black. It helped boost Netflix’s Strong Black Lead initiative that was relatively new at the time. And given the strong influence this audience has on culture (which drives viewership), it’s a more valuable customer than the average Netflix subscriber.

A standard customer acquisition cost / lifetime value ratio would undersell Homecoming. Not all customers are equally valuable. Netflix could have likely paid Beyoncé $40 million for Homecoming and still made money. It also reinforces the Coachella documentary’s position as a top-of-funnel draw for the 38-year-old singer. It would have been much harder to reach 1.1 million day-one viewers on any other streaming service.

A transition away from streaming exclusives

The further we go down the Houston native’s sales funnel, things start to change. A few days after I published last year’s article, Lemonade was made available on Spotify and all other streaming platforms!

I called that one wrong, and I should have seen it coming for two reasons. First, Beyoncé (2013) was made available everywhere after a few years. Lemonade was bound to follow the same path.

Second, streaming exclusives have largely faded away. Since Frank Ocean pulled that infamous okey-doke on Def Jam, major labels have turned away from the practice. Most major artists stopped releasing exclusives, but the few that remained on one service were legacy albums. When Jay Z recently put Reasonable Doubt on all platforms, it was one of the final nails in the coffin.

But the short-lived strategy was still critical for initial audience growth on the digital streaming providers. Tidal’s exclusives helped acquire its ideal customer. The company has doubled-down on that customer profile with its hip-hop-focused content strategy. The same is true with Apple Music.

Here’s what I wrote in a December member update:

Tidal had albums from Jay Z, Beyoncé, Kanye West, Rihanna, Radiohead, and more. Its users had early access to Formation World Tour concert tickets and other perks. It was a great way to build an initial userbase, similar to Apple Music’s exclusives in 2015 and 2016. Without it, there’s no way in hell Apple Music would have surpassed Spotify in U.S. paid subscribers.

Lemonade’s shift up to the Casual Beyhive tier highlights the role of timing in sales funnels. In April 2016, Lemonade required a Tidal (or HBO) subscription. But eventually, the diehards fans had memorized the lyrics and ran through all theories on who “Becky with the good hair” actually is. The pop culture sensation passed. It was time to extend the content to the next tier of fans. Otherwise, the “Formation” singer would leave money on the table.

Beyoncé’s new product at the bottom of the funnel is her Ivy Park-Adidas collection. In January, the brand relaunched with tremendous fanfare. The athleisure apparel sold out instantly. The non-celebrities who got their hands on the items must have a) marked the time of release on their calendar and won the internet click race, b) bought from a premium reseller on StockX or another marketplace, or c) bought the Popeye’s look-alike collection and tried to stunt on the ‘gram like it was Ivy Park. Either way, that takes dedication! It’s an even stronger level of fandom than subscribing to Tidal.

Ivy Park will stay at the bottom of the sales funnel for a while. Adidas will likely follow the limited drop rollout that it mastered with Yeezys. Kanye West’s sneakers started in limited supply and slowly ramped up over the years. Beyoncé wants to play the same long game. She called her Adidas deal “the partnership of a lifetime.” Parkwood Entertainment COO Steve Pamon thinks “it will be the biggest athletic partnership of all time.”

Here’s a look at the updated funnel: 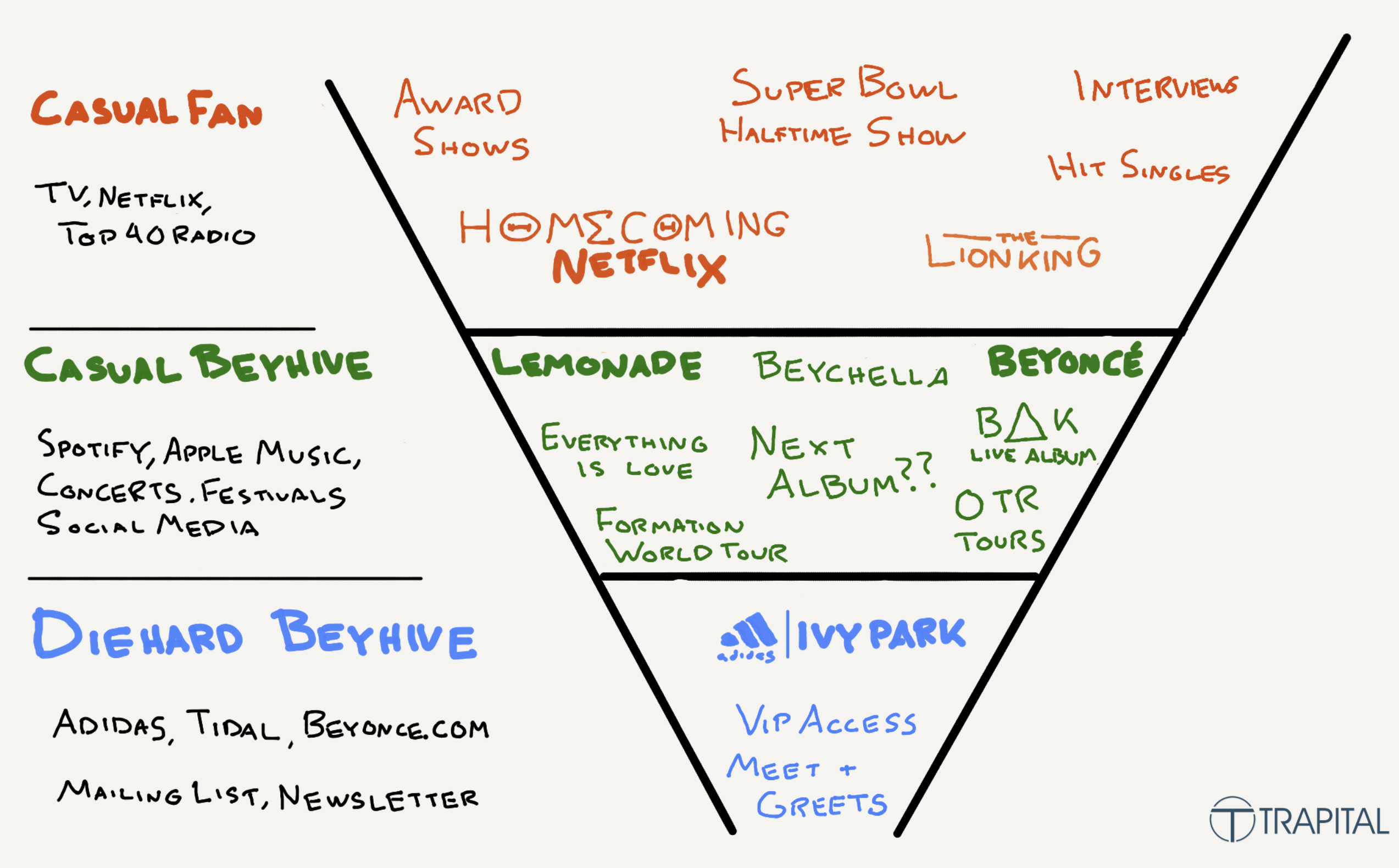 Beyoncé’s fans are patiently waiting for when (and how) her next album will be released. I doubt it will be exclusive on Tidal. It will most likely be available everywhere. I also assume that Netflix will provide a visual album or behind-the-scenes documentary since there are two more projects in their deal. But even though this next album may be widely available, there are plenty of ways to still serve diehard fans.

The Beyhive membership is a true Veblen good: the demand for her products increases as the price (and scarcity) increases. Her fans have no problem shelling out $250 on StubHub for nosebleed seats for her concerts. They stayed up in the wee hours of the morning to watch the Beychella livestream. They have been willing to pay up to $2,000 for VIP concert tickets. Some fans scoffed at the VIP ticket prices, but the price reflects the willingness to pay. Based on the current climate in the world, Beyoncé could be out here selling VIP access to private Zoom calls if she wanted.

The strategy has some flaws though. Beyoncé’s brand, unlike other Veblen goods, doesn’t relish in its high-priced exclusivity. She wants to leave a legacy and be an inspiration, especially for those less fortunate. It’s harder to do that if her core audience is rich people. Luckily, her newsletter and social media following provide connections to those proud Beyhive supporters who would support more if they could do so.

That next album may not come for a while. 2019 was a busy year for Beyoncé. She starred in The Lion King, curated a movie soundtrack, partnered with Adidas, and released Lemonade to the masses. Any 2020 plans she had have been likely impacted by the pandemic. But when the moment comes, fans will be ready—regardless of the distribution method.

And if a Beyhive Zoom call becomes part of that package, you can bet the Beyhive will be calling their internet service provider to up their bandwidth.