The Rise of Doja Cat

Doja Cat’s rise defies the traditional rules of music stardom and pop culture. The 24-year-old artist’s hit song “Say So” has entered the top ten of the Billboard Hot 100. It’s her biggest hit yet. Her come up is both unprecedented and ironically fitting.

Even if you’re not a TikTok user, you’ve probably heard the catchy, R&B-influenced track “Say So.” Not unlike “Old Town Road,” the hit Doja Cat song got its fame after it went insanely viral on the short-form video app.

It makes sense that the artist’s career would get a mainstream boost from a TikTok dance. Everything about Doja Cat is primed for the internet, from her e-girl aesthetics to the viral YouTube video “Mooo!” that propelled her from a small LA-based artist into the mainstream.

It was hard to tell whether her 2018 song “Mooo!” was legitimate, clout-chasing, or a smart mix of both. The song became an overnight sensation, but the rapper fell victim to the infamous Milkshake Duck. It’s when society falls in love with a previously unknown person, but then digs up history about their problematic past and boom—the person’s canceled. The interwebs resurfaced Doja’s tweets using homophobic slurs about Tyler, The Creator and others. The singer proudly defended herself, which led to further backlash. She eventually apologized.

Cancel culture infers that we would have never heard of Doja Cat again, but that’s obviously not the case. The incident has largely become an afterthought. The reality of cancel culture is that there are levels to this. Violent crimes are treated much differently than problematic statements. And people are more forgiving if the “milkshake ducking” occurs when the person is still relatively unknown. It would be much more damaging if those tweets were surfaced now as she’s rising up the ranks.

But Doja Cat’s ascension is also driven by internet fame itself. “Say So” is popular because it’s a viral TikTok sensation. Here’s the original video from TikTok that started it off: 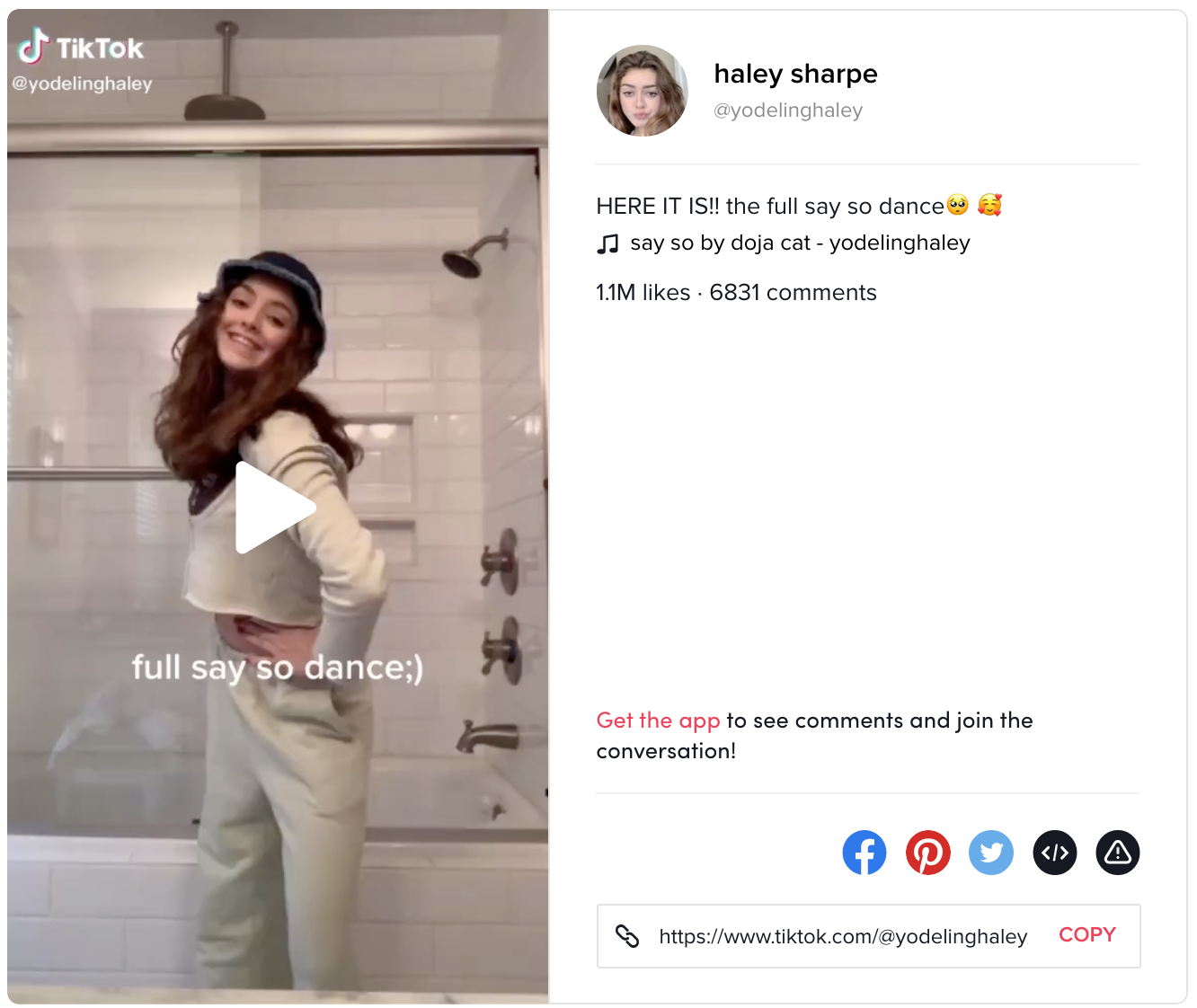 Like Lil’ Nas X’s “Old Town Road,” the dance caught fire from users themselves, which led to its rise on the digital streaming providers. And like Drake’s “In My Feelings,” Doja Cat released a video using those dance moves and brought the original dance creator on in the music video.

The goal should not be to create content to try and go viral. Instead, the goal should be to know how to capitalize if and when it does go viral. Doja Cat lucked out with “Mooo!” but when the opportunity arose with “Say So,” she knew how to take it to the next level.

As I literally, JUST mentioned with Doja Cat, this isn’t how it works! Beyonce tried to make the #BeforeILetGoChallenge a thing and it didn’t take off. And she’s Beyonce!

Most artists struggle, but I’ll admit—Drake is a bit of an anomaly. “Hotline Bling” was a successful meme, as was the Views album cover. He has a track record of setting these into motion.

For Toosie Roll, he did his homework and hit up some well-known dancers and artists for support.

…four 20-years-olds premiered a new TikTok-ready dance in a sparse living room with a stationary ceiling fan. The voice instructing them to dance was immediately recognizable as Drake’s, and he was giving simple instructions: right foot up, left foot slide, right foot slide. The song, though, hadn’t been released yet.

“Drake hit me up and was like, ‘Yo, I need your help,’” Toosie says. “So he sends the record. It was just an idea at the time. It was just the hook and a verse. I came up with this dance. [Drake said,] ‘What you think? You think you can come up with a dance for this song that I made?’ So I sit down, listen to it. Luckily, I’m at Ayo and Teo’s house with Hii Key and all of us. We all chilling. We came up with it pretty fast. We just all pieced it together. We all contributed.” 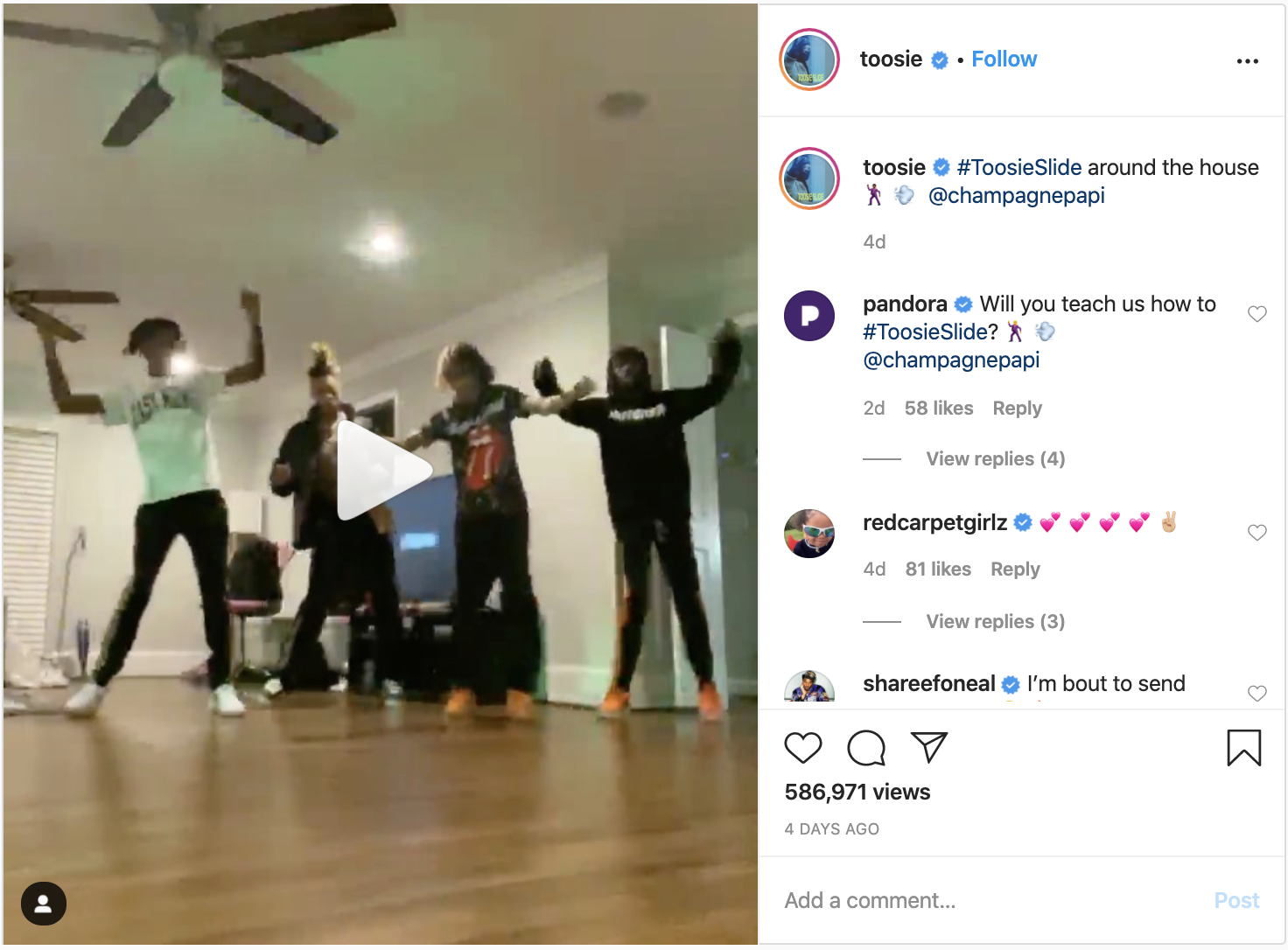 “Toosie Slide” has gotten all the earned media and attention it dreamed of in the past 72 hours. But media coverage is not the same as virality. We won’t know the true impact of this unless we see organic memes explode on TikTok and Instagram in the next few weeks.

I’m clearly skeptical, but I also acknowledge that Drake is in his own class. But if Drake, the biggest rapper in the world, can take all the smart steps and pivots to make a dance take off and it STILL doesn’t happen, then there are probably better ways for most artists to spend their time.

In three days, Quibi will make its grand debut. For those less familiar with the service, here’s an explanation from CNET:

Quibi, a mobile-only subscription video service set to launch Monday in the US and Canda, has been pumping up the hype for months. It has the backing of all the major Hollywood studios. A seemingly endless litany of film, TV, music and sports stars are making shows. And Quibi has raised $1.75 billion to fund its ultra-expensive short-form videos and to pay for splashy marketing like a Super Bowl ad. It’s also brought T-Mobile on board to offer free subscriptions to some wireless customers.

Last week I wrote about Drake’s production work on Quibi’s upcoming 48 Laws of Power. Several other hip-hop stars have teamed up with Quibi too. It will also feature Chance the Rapper in Punk’d, Offset in Skkrt With Offset, Usher in The Sauce, YG in & Music, 50 Cent in Trill League, and Nicole Riche (who’s apparently now a rapper??) in Nikki Fre$h.

From a talent perspective, Quibi has all the big names it could hope for. But from a business model perspective, it will face some challenges.

First, video streaming has become a fierce competition for IP. Quibi has no longstanding IP and likely won’t acquire any either. One of the reasons that Netflix has succeeded is because shows like Friends and The Office were in its catalog. Those rewatchable shows gave Netflix a strong base to expand its original content production. This is a gap for Quibi since it is clearly after the masses. As Hollywood has proven time and time again, it’s incredibly hard for viewers to tune into original programming, even if popular celebrities are involved.

Most networks can solve this by acquiring content, but Quibi’s short-form, mobile-friendly content format only exists on YouTube (more on this later). Starting from the ground-up is a timely and expensive gamble. Disney+, the newest major streaming service has started off strong, but its most popular show, The Mandalorian, is derived from Star Wars—one of the most valuable pieces of IP in American culture.

Second, Quibi is taking a big gamble with its venture capital-style approach to content. It’s launching 50 shows on Monday. If five of them are homeruns and the rest flop, that’s a victory. But the definition of a homerun and a flop are still subjective. Can a few popular hits support this entire operation and its growth plans?

Third, Quibi positions itself as a premium version of content that’s largely available on YouTube. Verizon tried this with Go90 and failed. It’s also similar to Luminary, which positions itself as the HBO for podcasts. The problem with “HBO for X” is that the quality gap that drove HBO’s success 20 years ago is less apparent in video streaming today. The Sopranos was leaps and bounds ahead of most other shows. Luminary was not. That’s less of a knock on Luminary, and more of an acknowledgment of how well-produced (and widely accessible) great podcasting content is.

For instance, will Quibi’s culture-focused content be leaps and bounds ahead of what Complex has done with Sneaker Shopping, or Hot Ones? I doubt it.

The one saving grace for Quibi is that the world is in quarantine and video streaming is up. The folks who have the privilege to be bored will be searching for new content. It will surely help its launch, but I’m skeptical of its long-term success.