Why Adidas’ Hip-Hop Partnerships are (Finally) Paying Off

Adidas has tried to regain its relevancy in hip-hop for years, but has now finally made considerable strides. 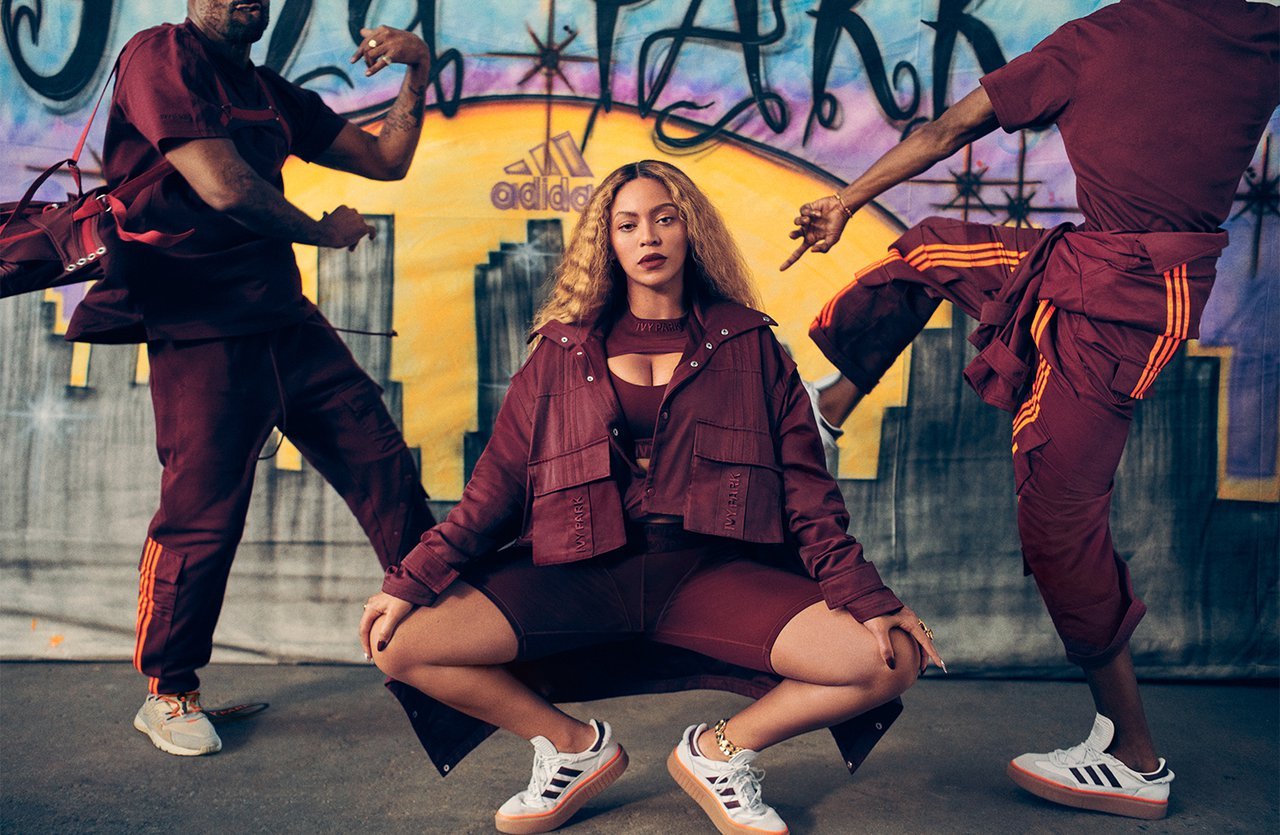 Adidas and Beyoncé are coming up on their one-year anniversary. Last April, the “Formation” singer agreed to become an Adidas creative partner, develop signature apparel, and relaunch her Ivy Park clothing line. She called it “the partnership of a lifetime.” Mrs. Carter had just reclaimed full ownership of Ivy Park in 2018 and wasn’t gonna join forces with just anyone. The Beyoncé-Adidas expectations were sky-high.

A few days before Ivy Park’s January 18 relaunch, Beyoncé sent 20 celebrity friends massive gifts which they unboxed and shared with their millions of social media followers. See, your favorite influencer uses influencer marketing too! When the brand relaunched, it sold out on adidas.com in minutes. The success led to an even bigger social media event. Even Popeye’s, a social media champion in its own right, joined in on the fun with its own Ivy Park-inspired clothing line.

We knew that Beyoncé was the master of rollouts, but Adidas has been on its game too. From the UltraBOOST to Kanye West’s Yeezys to athlete partnerships to Ivy Park, the brand is now synonymous with the culture.

But it took time to get here. The German apparel titan was after hip-hop for a long, long time. Despite its historical roots, dating back to Run DMC, nostalgia has its limits. Companies still need focus to become culturally relevant and reap the rewards that come with it.

In 2006, Adidas acquired Reebok. On paper, it made perfect sense. The Three Stripes had a strong global footprint but lacked North American presence. Adidas had a deal in place with Missy Elliott, whose music videos were great promo for the retro 1980s Adidas hip-hop look. But she was all Adidas had.

Reebok was an ideal complement. The ‘Rbk’ lifestyle brand had teamed up with A-List rappers 50 Cent, Nelly, and Jay Z, and NBA MVPs Allen Iverson and Shaquille O’Neal. Even Reebok’s athletes had hip-hop albums under their belt. Reebok knew its customers and knew them well.

The acquisition still raised concerns though. Steve Stoute, who partnered with Reebok to launch Rbk and brokered the deals with Jay Z and 50 Cent, expressed caution after the deal.

“Treat the Adidas and Reebok brands separately… There’s a potential problem if consumers see the lines as being blurred, so you have to treat them as standalones.”

There’s a paradox when companies make acquisitions for cultural gains. Integration challenges are inevitable and can easily diminish that desired culture, both internally and externally. Adidas’ rigid systems were bound to clash with Reebok’s agency-inspired approach, which impacts the brand’s perception.

A memorable Rbk commercial from that era.

Under the Adidas umbrella, Reebok lost that ‘Rbk’ edge. The athletes and rappers it signed had moved on or were past their primes. It missed out on the next generation of hip-hop artists. In the process, Reebok’s sneaker market share fell from 8% in 2006 to 2% in 2015.

“From the moment we started looking at the numbers, we knew it was a screwed-up business and that we’d paid too much,” a former Adidas exec told the Wall Street Journal.

This statement highlights a critical disconnect. Yes, Adidas paid a lot for Reebok—a 34% premium. And Reebok’s hip-hop era wasn’t perfect. It oversaturated the market with S. Dots and G-Unit sneakers, which ended up on the racks at Marshall’s. The cool factor disappeared. But that doesn’t mean that these deals don’t work. There were plenty of lessons learned.

But at the time, Adidas was likely jaded on endorsements altogether. It had a stretch of bad luck. In that era, its signature roster included Kevin Garnett, Tracy McGrady, Gilbert Arenas, Derrick Rose, Reggie Bush, and Robert Griffin III. Each of them had career-threatening injuries during their prime. The “Adidas curse” was a thing. I used to joke with my older brother, who loved McGrady’s sneakers, that I wasn’t trying to go out like T-Mac. I bought the LeBron James Nikes instead.

It’s understandable why Adidas’ experience with injury-prone stars and Reebok’s past-their-prime rappers may have led to skepticism, but it still wasn’t wise. For better or worse, luck plays a tremendous role.

A Much Needed UltraBOOST

Adidas’ fate didn’t change until it introduced BOOST in 2013. The new technology was a landmark achievement for Adidas in both running and athleisure. That same year, Adidas’ signed Kanye West to a deal. The Chicago artist was unhappy with Nike, his former partner. Before Kanye’s released his Yeezys, he rocked the UltraBOOSTs in public. The UltraBOOST-Yeezy tandem was the spark Adidas needed.

The adidas UltraBOOST set an entirely new benchmark for how a performance sneaker should feel and perform, but it was world-class tastemakers like Kanye West who brought the perfectly-simple yet complex design into the world of style. It became the most talked about shoe of 2015, even in a year when Kanye released his BOOST-equipped YEEZY 350. Thanks to this tandem of shoes, the Three Stripes gained market share, increased revenue, sold more product and most importantly, found itself back on the heels of Nike. If it wasn’t for the UltraBOOST serving as a proper intro to the YEEZY BOOST, there’s no telling where Adidas would be today.

This deal was the perfect balance of execution and luck—two things that Adidas lacked in the 2000s. BOOST was the well-executed product that changed the game. It got an exposure bump from Kanye luckily ending his relationship with Nike, where his Yeezy line had already gained a cult following. Adidas got one of hip-hop’s most popular entertainers to wear the UltraBOOST, leverage his own brand, and become one of Adidas’ strongest ambassadors. Ye praised Adidas and chastised Nike any chance he could. In the competty-tive social media era, Adidas couldn’t ask for much more.

Master the economics of hype

In 2015, Kanye sold just 9,000 pair of Yeezys in his first drop. He knew that scarcity was important, but he assured fans that the product would soon be available for all.

Here’s Kanye in a 2015 interview On Air With Ryan Seacrest:

“Eventually, everybody who wants to get Yeezys will get Yeezys; Adidas has promised me that, because there’s so many kids that have wanted them that couldn’t get them. I talked to the heads at Adidas, and they said we can make them.”

It was an ambitious claim, but it rose internal alarms. Would Yeezys repeat the same mistake and flood the market? Can an artist-led sneaker become a mass-market product and maintain its cool factor? Three years later, Kanye kept his word. In 2018, the Yeezy 350 Triple Whites released a rumored one million pairs. Most anyone who wanted them got them.

Adidas successfully executed the tricky economics of hype. Scarcity drives hype, but the limited supply can make it hard to generate revenue from volume. Companies love building hype, but they also love cashing in on that hype. In 2018, Yeezy became the ninth-highest selling sneaker in the U.S.

Adidas’ current CEO Kasper Rørsted sees the success, but still won’t go all in and mass-produce the shoes.

“We are continuing to manage volumes in a very disciplined manner so that for 2019 Yeezy sales will not make up a significant share of Adidas’ overall expected sales growth. Not because brand heat is decreasing, but because we have a disciplined approach to managing volumes and product life cycles.”

This mentality likely gave Beyoncé the confidence that Adidas can do the same with Ivy Park. Even if “everyone” can get their hands on Ivy Park by 2023, Adidas can manage inventory and demand appropriately. Hip-hop has also become much more global, so Adidas has the infrastructure to ensure that the product can reach every corner of the Beyhive.

But despite Adidas’ growth and potential, Reebok is still in an awkward position. The brand is a hybrid of its downmarket fitness positioning and hip-hop. It has partnerships in place with Cardi B, Lil’ Baby, Future, Lil’ Yachty, and Rae Sremmurd. These artists can help revitalize Reebok’s nostalgia, similar to what FILA and Champion have done in recent years.

In an ironic way, Adidas and Reebok have switched roles. Adidas focuses on the biggest stars, while Reebok taps into its old school hip-hop vibes.

The so-called “Adidas curse” is also gone. Its flagship athletes are James Harden who has been a top-NBA player for several years, Kansas City Chiefs QB Patrick Mahomes who just won the Super Bowl, and fellow Super Bowl MVP of the Denver Broncos Von Miller.

Adidas’ cultural assets are operating on all cylinders. It might not last forever, but 2020 is off to a hot start.

P.S. – Donald Glover recently parted ways with Adidas after one year. No details were shared, but if anyone knows more, let me know!