How The Weeknd Mastered his Brand

The Toronto artist maintained his mystery and still became a superstar.

The Weeknd’s career has played out like an Emmy award-winning drama with plot twists each season. Every few years, fans think they finally got their boy Abel Tesfaye figured out. But that’s the exact moment when he takes them for a turn. He was an “unknown underground indie group” until he unveiled his true identity. He was “Drake’s protege,” then turned down OVO Sound. He was “the guy with the wild, Basquiat-looking dreadlocks,” then he cut them.

Here’s a quote from his 2015 Rolling Stone interview:

“We live in an era when everything is so excessive, I think it’s refreshing for everybody to be like, ‘Who the f**k is this guy?’ I think that’s why my career is going to be so long: Because I haven’t given people everything.”

Five years later, this is still true. The 30-year-old limits his accessibility but still maximizes his reach. His peers tend to follow the same playbook, but the Starboy has stayed true to his path. Fans may never get closure on his identity, and that’s exactly how he wants it.

The Weeknd’s come up has become a classic story in mystery marketing.

[La Mar Taylor, The Weeknd’s best friend] uploaded Tesfaye’s first three songs — ‘‘The Morning,’’ ‘‘What You Need’’ and ‘‘Loft Music’’ — to YouTube in the fall of 2010, posting the links to their friends’ Facebook walls and hoping for the best. The clips were audio only, accompanied by black-and-white photographs of not-quite-dressed women. Tesfaye’s likeness was nowhere to be found; you had to dig to find his name. He had wanted to call himself the Weekend, but there was already a rock band in Ontario called that, so he dropped a letter. His anonymity was so complete, he says, that his co-workers at American Apparel would listen to his music while he was working without realizing it was his.”

“I didn’t want to put a face to it,” he told Forbes. “I wanted to create a fan base that loved me for my art.”

People often say that his early mixtapes lacked a brand, but this isn’t true. The music and artwork was the brand. Those songs had dark, genre-bending themes full of lust, drugs, and despair. That brand gained traction. His unknown identity drove the intrigue further. To call his mixtapes “brandless” makes them sound like NOW That’s What I Call Music! Vol. 35.

It takes focus to do this well. Companies have tried similar strategies and failed. Brandless—ironically named— was an ecommerce company that sold household essentials for low prices and minimal branding. It raised a whopping $240 million from SoftBank on the notion that consumers prioritized value over marketing. But last month, the venture-backed startup shut its doors. As The Drum put it, Brandless failed because it was “a brand that pretended not to be a brand…After all, it is impossible to distinguish yourself if your goal is to be indistinguishable.”

The Weeknd and his team understood this critical nuance. “Not having a brand” still requires the curation and focus of having a brand. It actually requires more work since its a nonstandard approach with less how-to guides and fewer advisors who can share quick tips. It’s an ambitious goal that can’t be met with money alone. Not even $240 million. 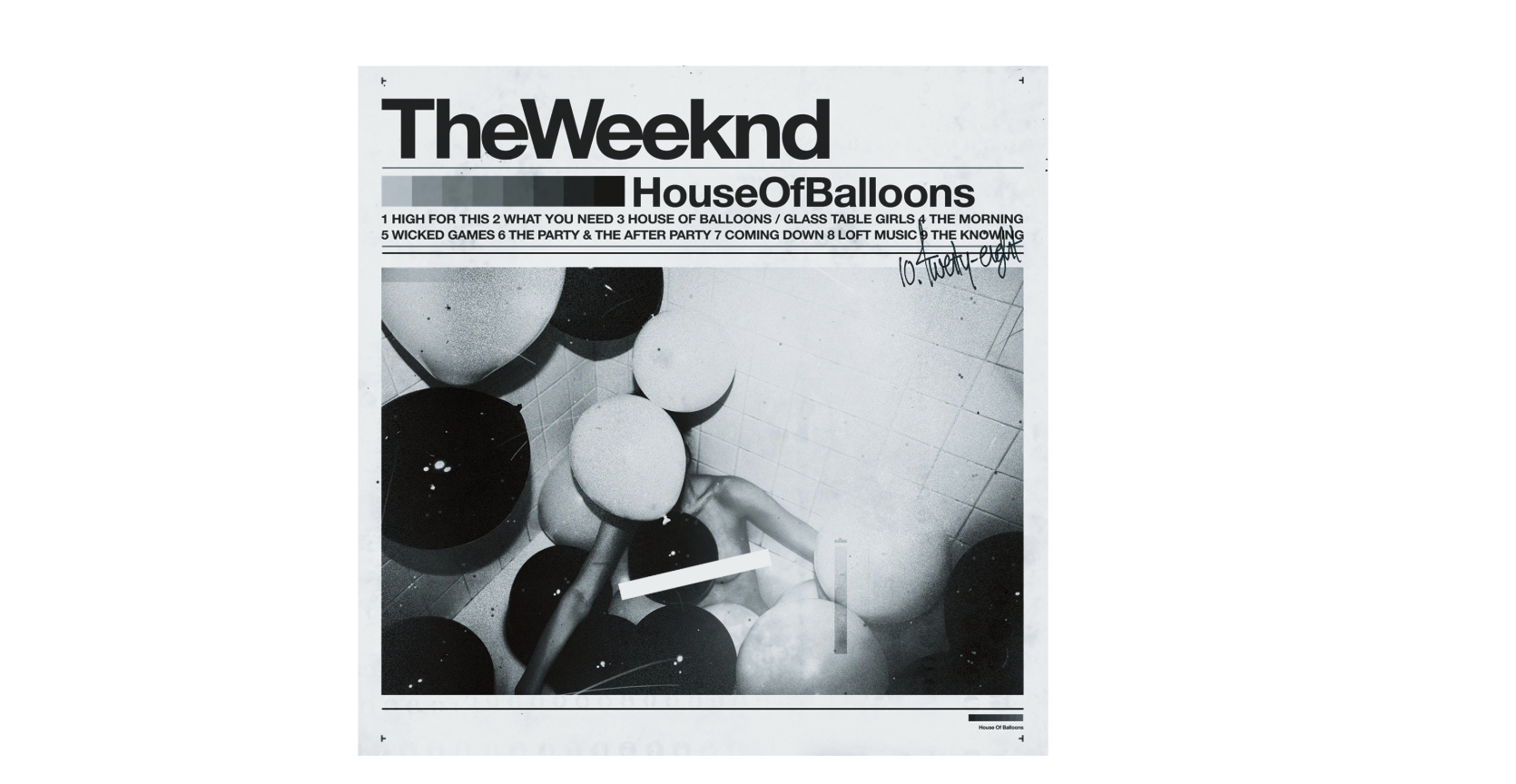 The cover for The Weeknd’s first mixtape, House of Balloons. See that American Apparel-inspired font!

The value prop needs to strong

In late 2010, The Weeknd’s music got featured on the OVO Sound blog. It boosted his exposure and sparked a friendship with fellow Toronto artist Drake. Once they collaborated on each other’s projects, it seemed inevitable that The Weeknd would join Team OVO.

But Abel told Drake, “I don’t want to sign under another artist because I feel I can be just as big or bigger.” The Weeknd’s manager Sal Slaiby said that they didn’t want a label that got involved with the creative process. In 2012, The Weeknd launched XO Records as a joint venture with Republic Records, where the “Hotline Bling” artist was also signed.

When an artist signs under another artist, it’s like a startup getting acquired. Even though the Instagram founders succeeded under Facebook, they would never have outshined Facebook’s leadership. Similarly, it’s unlikely that anyone on TDE will surpass Kendrick Lamar. Same with J. Cole on Dreamville. Same with Drake on OVO.

To be fair, those three rappers, unlike Mark Zuckerberg, would love to pass the torch in-house. But it’s unlikely to happen in today’s hip-hop landscape. There’s some irony since both Drake and Nicki Minaj came up under Lil’ Wayne’s Young Money militia. But a lot’s changed since then, and OVO Sound is not Young Money.

The Weeknd made the right call for two more reasons. First, OVO’s main value prop is the Drake “stimulus package”—the proverbial career bump that artists get from collaborating with the Toronto rapper. But The Weeknd had already got those benefits. He got the co-sign from that 2010 blog post, placement on Take Care, and features on his own projects. What else was there to gain? If he wanted to level up, it was time to move on.

Second, and most importantly, The Weeknd’s brand is not aligned with OVO. Drake has never been a mystery. To anyone. His only career surprise was that he was **in my Pusha T voice** hiding a child. The 6 God’s brand thrives on overexposure and omnipresence. Those core competencies don’t help The Weeknd. Team OVO may have tried to turn him into something he wasn’t.

This behind the scenes on The Weeknd’s “Blinding Lights” music video is the closest thing fans may get to a true documentary.

The necessary tradeoffs for a mystery superstar

Turning down OVO raised his ceiling, but it lowered the floor too. His first misstep came in 2013 when Kiss Land, his debut studio album, didn’t sell as well as he hoped. Abel went back to the drawing board.

It’s the inevitable point that every star hits to get to the next level. The product has to evolve to attract new fans. Some of his day-ones will inevitably leave when that happens, but when it’s done right, the loss is minimal and the growth is strong.

Tyler Perry balanced this well. His Madea movies had taken off, but he still stayed true to his roots with the theater circuit and kept his email list active. So did J. Cole and Future. After going too commercial with earlier albums, both artists returned to their mixtape roots and have kept that same energy since.

Perry and Future’s prolific output wouldn’t work for The Weeknd though. That much exposure may ruin the mystique. The Weeknd’s path to superstardom had to be more selective and aware of the tradeoffs.

“Love Me Harder” led to “Earned It” on the 50 Shades of Grey soundtrack, which led to his blockbuster hits, “The Hills” and “Can’t Feel My Face.” These songs, and the 2015 album Beauty Behind the Madness, became the dividing line between his early fans and the masses. He lost some fans from the Trilogy mixtape days, but he gained a whole lot more in the process.

His interview and promo runs have expanded too. He now sits down with more major outlets to promote his albums. But he won’t sit down with anyone. He has never been on The Breakfast Club. Several years ago he met Charlamagne Tha God, who told him that he should called himself “Tuesday” first and work up to being called “The Weeknd.” No wonder he rarely does video interviews!

Luckily, he found the balance that made the most sense.

The Weeknd’s latest album, After Hours, is like a visual concept album that’s consistent with most of his work. Each music video and live performance has introduces us to the same character who just survived a wild night out. It feels connected to Abel’s recent role in the Uncut Gems movie. The consistency is a reminder of this quote from his 2015 Fast Company interview:

“I feel like everything we do comes down to how it looks. Even no branding is branding. For example, you had no face or image to put to my music at first. That was branding. I spend just as much time on how people hear my music as I do the actual music, no matter how long it takes. I’m such a visual artist as well that it always goes hand-in-hand.”

That commitment has been there from the jump and will continue to be. As his career continues, we may never fully know what Abel Tesfaye is all about. Just like he planned it.