Hey! I hope you enjoyed your socially distant weekend! Here’s a sneak peek at one of the Trapital data resources I’m working on… The Rap Investor List! 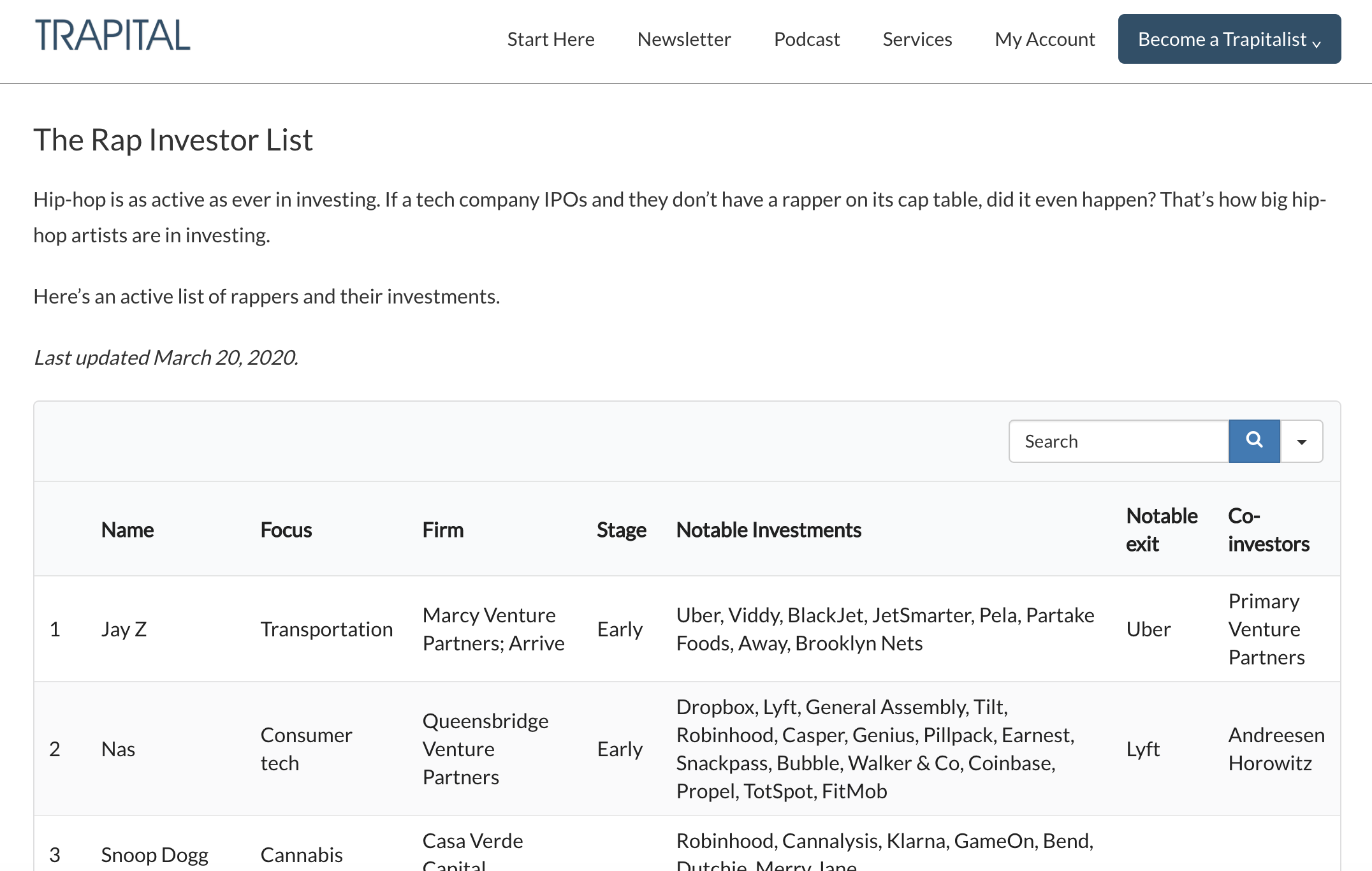 As a heads up, I plan to limit access to annual Trapital members. A lot of work goes into these, and I need more commitment to justify the value and time put in.

This past weekend, The Bronx’s own DJ D-Nice gave the world a breath of fresh air.

Here’s a quick recap from Jelani Cobb at The New Yorker:

For nine hours on Saturday night, D-Nice oversaw a spectacle that was part dance party, part social-media therapy, and a health-policy initiative cleverer than anything the government has put together… On the first night of Club Quarantine, on Wednesday, he had about two hundred listeners. By 7 p.m. Eastern Time on Saturday, the crowd was hovering around nineteen thousand…At the peak, around 10:30 p.m. Eastern Time, he hit a hundred and five thousand listeners.

The set at Club Quarantine followed the arc of all good things that become a little too popular: first, a small number of people intimately connected to the cause and familiar with the references, people who know exactly why he’d play Meli’sa Morgan’s “Fool’s Paradise” early on and Frankie Beverly’s “Before I Let Go” late in the game. Then a bigger, more diverse set of folk show up, drawn by word of mouth—the scroll of A-listers popping into the room tends to have that effect.

Yesterday, the 49-year-old’s live stream topped out at 150,000 people. Other well-known DJ’s like Questlove and DJ Premier launched their own streams, but no one topped the Boogie Down Productions DJ.

Pop culture events like this are few and far between. But this moment was bound to happen. All it needed was a well-known and respected first-mover to put the gears in motion during this lockdown. Similar hip-hop live streams have captured our attention when the world wasn’t quarantined.

Three years ago, producers Swizz Beatz and Just Blaze went on Instagram Live and gave fans an epic beat battle. It was fun and somewhat impromptu. Swizzy even dropped an unreleased track by Jay Z and DMX. Both producers acknowledged that they could have earned money from the event, but it was pure fun. The Ruff Ryders beatmaker tagged Timbaland and Pharrell as two producers who were up next. Fans got excited. Articles were written about the hypothetical battle between the Virginia DJs, but unfortunately it never happened. The closest we got was this fun conversation of the two of them comparing each other’s beats and saying, “Nah man I was trying to get like you.”

If Timbo and Pharrell announced they were doing a battle this coming weekend, people would lose their damn minds. No one would shame them if they sponsored the event. Pharrell likely took a financial hit when his Something in the Water festival got canceled for 2020. It would be an easy way to still show out, especially for the nostalgic folks who live for the late 90s and early 2000s music (like me). It wouldn’t pull in D-Nice numbers—a producer battle is more for true hip-hop fans—but those fans who wanna see it will be all in.

Club Quarantine is yet another reminder of the power of social media during this crisis. Podcasting and music streaming are down since they lose listenership from those who aren’t commuting. But video streaming is up. It will only get higher as more regions strengthen their lockdown measures to reduce the spread of COVID-19. Even if no one tops DJ-Nice’s 150,000 attendees, there’s plenty of bread to go around.

Opportunities in a crisis

As D-Nice proved, there’s a silver lining in all the madness. He didn’t directly monetize Club Quarantine, but his audience highlights the business opportunity. The same is happening in other industries.

While the rest of the economy is tanking from the crippling impact of the coronavirus, business at the biggest technology companies is holding steady — even thriving.

Now, as movie theaters close under government orders, Netflix and YouTube are gaining a new audience…Even Apple, which once appeared to be among the American companies most at risk from the coronavirus because of its dependence on Chinese factories and consumers, appears to be on good footing…

Communication tools like the videoconferencing service Zoom are now essential, but ride-hailing firms like Uber and Lyft and property-rental sites like Airbnb are seeing customers vanish.

It’s no coincidence that FAANG companies and Microsoft have succeeded. They can all meet customers where they’re at with products that demand their full attention, like video streaming, or those that demand partial attention, like audio streaming. Even if one side of the house has taken a hit in the past three weeks, the others will rise and offset the loss.

The same is true with COVID-19’s impact on hip-hop. The superstars will be fine. They have enough revenue streams to weather the storm. Drake might consider pushing back his album release and forgo live performance revenue, but it’s a great time for his partnerships with live-streaming apps like Caffeine or his ownership in the 100 Thieves esports gaming company.

The next-tier artists though (e.g. hip-hop’s comparables to Uber, Lyft, and Airbnb) is where the struggle starts. There’s a petition for Spotify to triple the amount it pays artists per stream during this crisis. Merchandise sales won’t make up that difference either. If I can’t leave the house, I’m less likely to get the shirt I need to finalize my fit for a day party.

Like the FAANG companies, there are areas in music that are experiencing upticks. That’s where the attention should be. For instance, despite music streaming being down 9%, streaming for kid’s music is up 4%. Who’s ready to hit their in-home studio and give “Baby Shark” the hip-hop remix it deserves?!

On a more serious note, the best digital opportunities exist on the technology platforms that have thrived in crisis. I bet that plenty of rappers are in talks or currently producing content with HBO, Netflix, Amazon, or others. Now’s the time to rethink the grand rollout and release it sooner rather than later.

That content doesn’t need the same level of perfection and polish it had two months ago. It won’t be streamed in the highest quality anyway! It’s time to drop the mixtape version. Fans want engagement and entertainment, even if it’s not perfect. Artists build up followings on all these platforms anyway. Instead of using it to draw folks away from the platform to Spotify, merch websites, or elsewhere, now’s the time to monetize those fans exactly where they’re at.

On the streaming side, SoundCloud and Twitch have already made efforts on this front. From SoundCloud:

It’s an unsettling time for everyone right now, and we know COVID-19 has been especially hard on musicians who were scheduled to play live shows over the next few months. Many creators are turning to live video streaming platforms to connect with their fans.

To help you keep your career on track, we’re partnering with Twitch so all SoundCloud Pro, SoundCloud Premier and Repost by SoundCloud creators can start earning money from their Twitch streams by fast-tracking Affiliate status. Now, wherever you’re social distancing, you can still connect to millions of fans IRL and get paid for your work.

SoundCloud streams are likely down, and Twitch has been up. Now SoundCloud’s artists, and SoundCloud itself, can benefit. This is one of the many examples of how it’s done.

The companies that help artists during this tough time will be remembered. Bandcamp, an online music company that lets fans directly support musicians, waived it’s revenue share on Friday to give that money directly to the musicians. The results were inspiring.

The numbers tell a remarkable story: on a typical Friday, fans buy about 47,000 items on Bandcamp, but this past Friday, fans bought nearly 800,000, or $4.3 million worth of music and merch. That’s more than 15 times our normal Friday, and at the peak, fans were buying 11 items per second.

Bandcamp is a bit less popular in hip-hop circles, but it’s still impressive. Two factors made this successful:

It’s derivative of the successful Cash App giveaways. The same sentiment holds. A company that’s already stretched for funds and considering layoffs can’t do this. But for those that can, it’s not a bad idea to consider.

When the curve has flattened and COVID-19 runs its course, these are the companies that will be remembered. It’s not too late for others to do the same.