Hey! This has been the first full week of social distancing for a lot of us. Glad we made through! I accidentally put in the wrong “read in browser” link in Wednesday’s article. I assume you still found the Cash App article, but if not, here it is.

Thanks again to everyone who attended yesterday’s virtual work-from-home happy hour. It was a nice break during the week. Hope the rest of you are staying safe!

Today’s update covers how digital streaming services have adapted to increased traffic, the wave of Coronavirus-themed music, and COVID-19’s impact on radio stations.

Each day, the government takes stronger action to flatten the curve. (Here in California, Governor Newsom issued a mandatory Stay at Home order). And each day, streaming services see increased traffic. It’s a good situation to be in, but it has its challenges.

Last week, Twitch reported a 10% increase in traffic (which means it’s even higher this week). That’s good news for YBN Nahmir, Danny Brown, and other rappers who built fanbases in Twitch. The heightened traffic has also led to more interest in business opportunities for streamers.

Here’s Twitch streamer Bijan Stephen in an article from The Verge:

This means that there will be more creators. It’s a good time for those in the business of helping creators launch businesses. The heightened demand may subside once everyday life continues, but the creator ecosystem will still thrive.

The major digital streaming companies have taken stronger measures. Both Netflix and YouTube have reduced video quality in Europe to avoid network congestion. Amazon Prime Video plans to do the same. #SwitchToStandard is the hashtag used by Netflix CEO Reed Hastings. He expects this will reduce traffic by 25%.

Europe has been a week or two ahead of the U.S. with COVID-19 impact and measures. Soon enough, these measures will reach the rest of the world. Can the networks handle that much traffic—even at standard definition? How will streaming services adjust?

These services could go “old school” and charge more (or have worse quality) during peak hours. There could be metered usage for certain users in high traffic regions. But those companies need to proceed with caution. There’s a fine, fine line between profiting and profiteering.

Business can continue. Many of us—including myself—are thinking of thoughtful ways to address the impact on customers, while finding smart ways to continue. It’s possible, but needs to be done tastefully.

Music consumption follows a slightly similar problem, but the downside is different. Some artists like Alicia Keys have pushed back their album releases, but others have stayed put. Lil’ Uzi Vert’s massive success with Eternal Atake proves that stars can do well in this climate. Yesterday, The Weeknd broke an Apple Music record with nearly 1 million pre-adds (Apple’s version of pre-orders) for his album After Hours. I’m sure he will still sell hundreds of thousands of copies of his album and its endless bundles.

But most artists can’t live off their streaming numbers and album bundles like Lil’ Uzi Vert or The Weeknd. As I said last week, the big-name artists will be fine. The streaming services they use will be fine too. But the majority of artists who rely on live performance to make ends meet will continue to take a hit.

The “Coronavirus” Songs You Never Asked For

Another trending topic, another tidal wave of artists who capitalize on it with growth hacks and other search engine optimization tactics. This time, the ‘rona is the latest victim.

I’ll admit, I was naive. When Weird Al Yankovich announced he wouldn’t drop a song called “My Corona” I was relieved. I thought that his decision would lead to an unsaid acceptance to avoid this. But Weird Al just one person, and I should have known better!

Here’s a Spotify screenshot I took today of Spotify of songs titled Coronavirus: 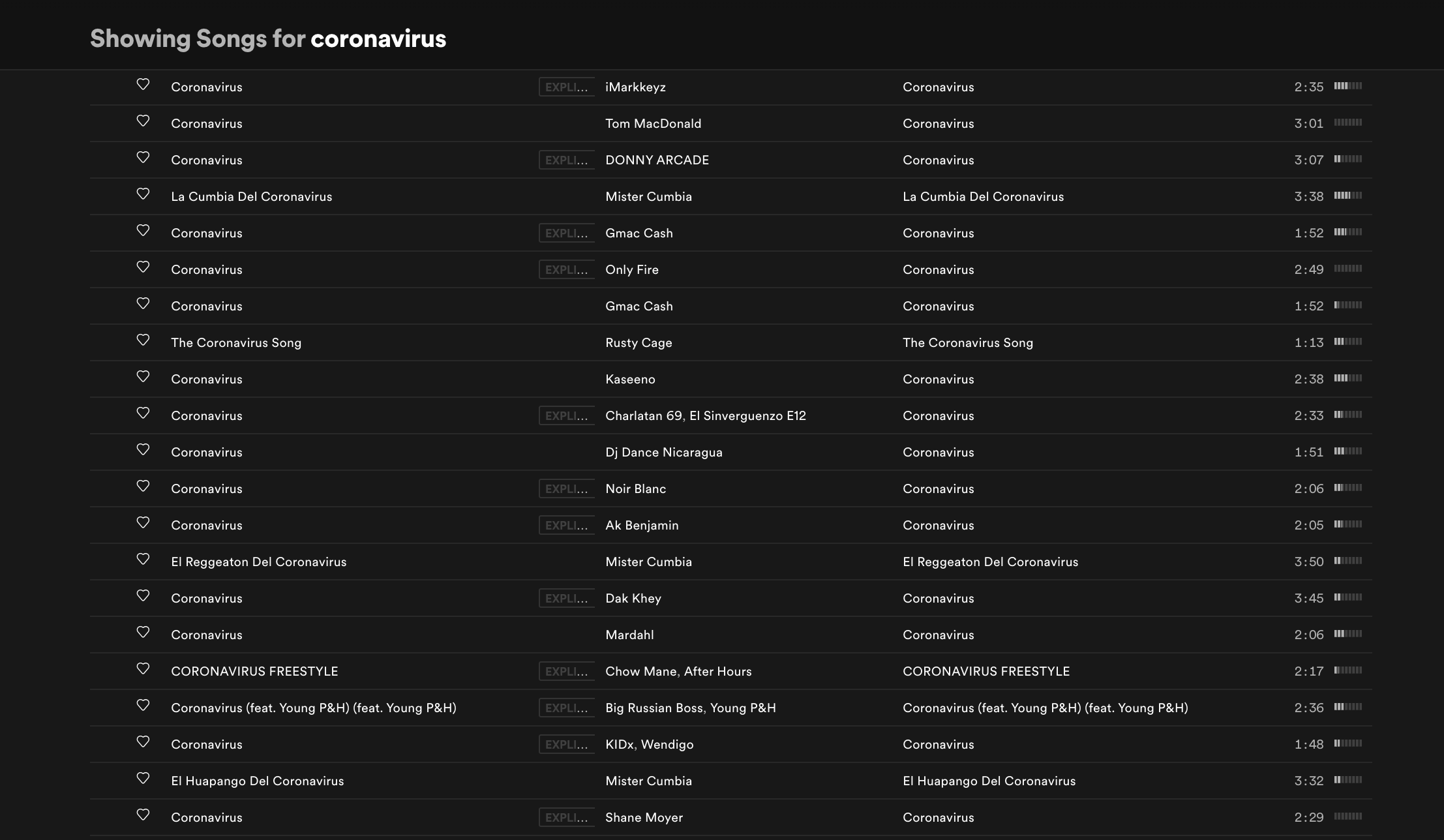 There’s more, but that’s all I could fit in a screenshot. This is the same trend I called out Wednesday’s Cash App article with the hundreds of songs named “Cash App.” Some of those name drops are genuine shoutouts, but most are there to get clicks and streams.

“…the practice of naming a song after something already famous — coasting behind a proven hit and enjoying stray beams of admiration — seems to be on the rise. A single by the producer Sam Feldt titled “Post Malone” is pulling in close to 900,000 streams a day on Spotify; blackbear’s “Hot Girl Bummer,” which plays off Megan Thee Stallion’s recent meme-turned-hit “Hot Girl Summer,” is doing even better.

“Everyone’s fighting for attention,” says Barry “Hefner” Johnson, co-founder of the management company Since the 80s, which includes 21 Savage and J.I.D. on its roster. “If you can get a keyword, you’re gonna name something some shit for attention. You damn near have to.”

This week, Leight followed up in Rolling Stone on Coronavirus specifically:

“…the widespread interest in “La Cumbia Del Coronavirus” across Latin America led to its debut on the Global Viral 50 this week. That can potentially introduce it to a wider pool of listeners, since the playlist has more than 1.6 million followers. The single has become one of Mister Cumbia’s biggest songs on Spotify, and it has earned more than 4 million views on YouTube…

COVID-19 is also influencing rollout strategies. The Dominican singer Chimbala released a remix of his hit “Rueda” on Thursday, and he plans to support it with “a bunch of memes around coronavirus,” according to Pedro Guzman, who leads music operations for MediaNet Partners…”

This is music streaming’s version of clickbait. It’s the Buzzfeed quiz with the headline that’s begging me to interrupt my day to determine which member of the Kardashian-Jenner family that I’m most like. These clickbait songs are now a classic example of “if you can’t beat’ em, join em.”

Cardi B’s “Coronavirus” remix falls in this same category. Here’s the viral clip that started it all:

Her post was turned into a song by a DJ named iMarkkeyz. The song has skyrocketed on the iTunes charts. Cardi B said that she wants her royalties, but both her and iMarkkeyz plan to donate the proceeds to charity.

It’s a kind gesture, but Bardi and the DJ have already benefited from this regardless. The DJ has been known for making songs like this. According to the New York Times, the DJ’s followers were known for these types of clips. Once Cardi’s clip went viral, his followers sent out the bat signal and said, “you know what to do.” He’s gained more attention than ever before. His past remixes are likely getting more traffic too. The same goes for Cardi. Yesterday she gained the second-most followers on Instagram, which isn’t bad considering she’s the ~36th most-followed person (just ahead of Justin Timberlake, behind LeBron James).

The come up is real, especially for those who aren’t as well off as Cardi B. But this is a trend that won’t end any time soon.

There’s been limited discussion about COVID-19’s impact on radio. If people are commuting and traveling less, then listenership should be down. But as of last week, iHeartMedia CEO Bob Pittman is still bullish on the future.

From The Hollywood Reporter:

That statement comes off a bit high-and-mighty, but I digress. This may be a timing issue. iHeartMedia only covers US markets, so the decline may be delayed. Additionally, iHeartMedia has strengthened its podcasting business, which may offset the loss in radio given the spike in digital media consumption.

But most radio station companies aren’t conglomerates like iHeartMedia. They rely on pledge drives and fundraising initiatives. Many of those have been put on hold.

Hot Pod’s Nick Quah wrote about this in Vulture. Even the radio stations with loss leaders and subsidizing businesses have taken a hit:

“Those audio businesses that have a brick-and-mortar component, such as a studio or co-working space, have also been hit hard and fast. Michelle Durant, who helps run Chelmsford Community Radio in the U.K., explained: “Our once-bustling coffee shop, which usually helped cover some of the costs, is a shadow of its former self, and the small businesses we work with are also impacted. Footfall is down everywhere. Advertisers are hard to come by or want stupidly cheap deals.”

Where to go from here? What will the next few months look like?

To lessen the impact and burden, these radio stations can do their best to increase and promote the accessibility of their digital resources. If their interviews and daily commentary aren’t already turned into daily podcasts, now’s the time.

Can their “5 o’clock free cash giveaways” be done on social media? Can exclusive content be licensed to a streaming service—ideally one with heightened traffic and not enough new content? These are all options to consider.

It’s gonna get rough. A lot of businesses we love might not make it. What can iHeartMedia or Sirius XM-Pandora do to help the greater industry? They can weather the storm, but the accelerated decline of their industry will eventually impact them as well.