Last week’s “Cash App Friday” came at the perfect time. The COVID-19 pandemic has been costly, scary, and uncertain, especially for those living paycheck-to-paycheck. On Cash App Fridays, the mobile payment app users can log on Twitter and reply to @CashApp with their $cashtag for a chance to win prizes that range from $100 to $500. Later that weekend, Cash App matched some of the giveaways from Shea Serrano –The Ringer staff writer and Trapital Podcast guest— who had already made it habit to give money to those in need.

These philanthropic measures are gracious, but it’s essential to Cash App’s growth model. In 2019, the company spent an estimated $60,000 on Cash App Fridays. In return, it earned much more in heightened brand awareness and earned media. This strategy translated well to hip-hop, where rappers use the app to give money to fans. Cash App has now been name-dropped by over 200 hip-hop artists.

Cash App achieved the modern brand’s dream: to become part of the culture. No appropriation. No cringe-worthy attempts to sound like a 23-year-old hypebeast. All genuine. It’s easier said than done, and it’s a model others can learn from.

Make it easy for the customer

When Cash App launched in 2013, it was much more buttoned-up. Users needed phone numbers or email addresses to transfer money. A year and a half later, the service eased up, followed Venmo’s lead with usernames, and introduced the $cashtag. These handles made the app more social and reduced friction to transfer money.

Square continued this trend when it offered debit cards. From Motley Fool:

Square introduced a virtual debit card at the end of 2016, which allowed users to spend their Cash App balance online or through a mobile wallet. So, if you were ordering a pizza online, for example, your friends could send you money on Cash App, then you could pay for the pie with the debit card number.

Square followed it up in April with a physical debit card and allowed users to add a personalized signature or drawing to the front of the card. The card has proved extremely popular, with users spending over $90 million using their Cash Cards during the month of December. That’s a run rate of over $1 billion.

It dropped a full year before Venmo’s debit card, which also helped!

Cash App took its efforts to another level in November 2017 when it introduced the ability to trade Bitcoin. This was one month before Bitcoin’s peak valuation (and peak public interest). The timing was perfect. It would be like buying Nicki Minaj stock the month before “Monster” came out.

Square CFO Amrita Ahuja said that Cash App’s Bitcoin and Investing customers generate up to two-to-three times more revenue than the rest. Since Bitcoin accounts for about half of Cash App’s revenue and Cash App has 24 million monthly active users, that means less than 7 million (28%) use those features.

Most companies would use this as a reason to solely focus on acquiring more Bitcoin investors. They would run ads in fintech newsletters, sponsor emerging tech meetups, find Libertarian groups on Reddit, and so on.

But Cash App expanded its reach. Cash App giveaway recipients aren’t exactly the demo for Bitcoin investing. But they might be someday and may spread the word to someone who is in that cryptocurrency demo. That’s what Cash App is banking on (literally). This is the long game. 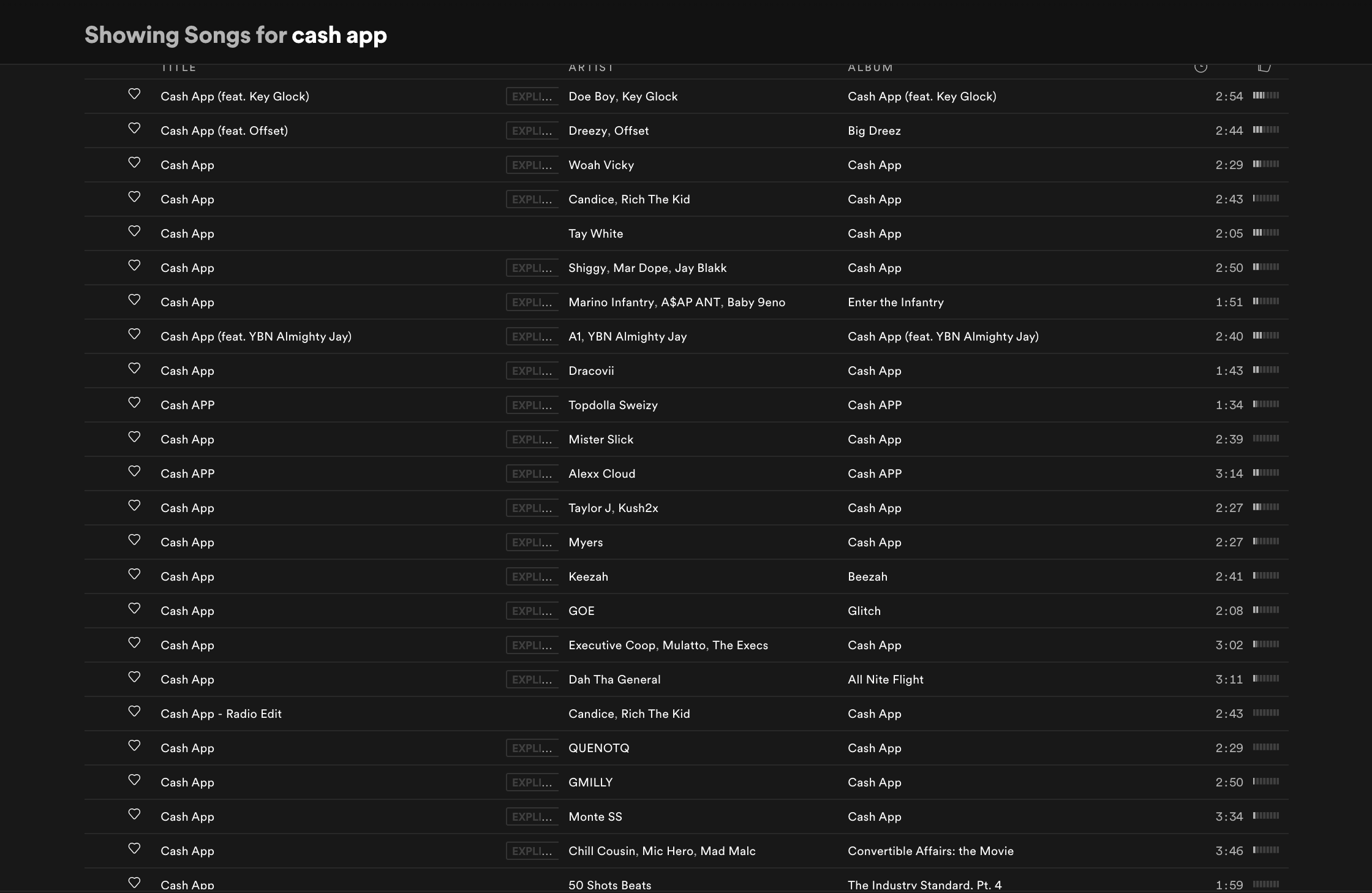 This is a Spotify screenshot of songs named “Cash App.” That list keeps going… it’s clearly an SEO play.

“This is also something we weren’t expecting, but I think Cash App has touched in the culture. We’ve just benefited from people loving it and wanting to sing about it, and putting it in their music videos, and it’s amazing how much that spreads.”

But once Square noticed the trend, it locked in. In 2018 it teamed up with Travis Scott and Lil’ B. In December, it got together with Snoop Dogg. Each of them used the app to give away money. The company acquired customers through the rappers’ social media followings at an extremely low cost. Free money is an easy sell, and it doesn’t take that many customers to justify the cost.

Here’s a great breakdown from Ark Invest on the low-cost customer acquisition:

While banks can pay from $350 to $1500 to acquire users, Cash App acquired a new customer through Burger King in five minutes without any direct mail or bank branch visit.

Square has run similar [$100,000] campaigns with rappers like Travis Scott and Lil B and other influencers, triggering a network effect for the Cash App… If only 129 of the 120,000 who commented on [Travis Scott’s] tweet were new to Cash App, then Square’s cost of customer acquisition would have been less than the $925 per user that banks pay on average, according to our research, and 6,000 comments, only 5% of the total, would have dropped it to $20. Moreover, as the converted users appear to spread the word on social media, the Cash App can acquire additional users from just one.

That’s well worth $100,000 for both La Flame and Cash App. It’s even more worthwhile considering the influence that hip-hop fans have on their peers. According to REVOLT’s Gen Hip Hop study, hip-hop fans are 2x more likely to be culturally influential. It’s the right audience to acquire.

Cash App’s user base is strongest in the South and the Midwest of the US, which aligns with the regions where many hip-hop fans are at. It’s the opposite of most founders who focus first on their “early adopter” personal networks in the coastal metro hubs in New York and San Francisco. This strategy made more sense years ago when broadband internet access was noticeably stronger in tech hubs and universities, but that’s no longer the case. It’s 2020. Smartphones are now ubiquitous. It’s time to think beyond Mark Zuckerberg’s Ivy League expansion plan that worked for Facebook in 2004.

Venmo’s growth strategy was more aligned with the traditional tech growth model. The founders are UPenn alums who hit up Princeton Hackathons and other similar events. It had its own “Million Dollar Money Tree” cash giveaway and $5 referral sign-up bonuses to attract customers. But those offers were also centered around Ivy League users and their friends who live on the coasts.

I drew this chart to highlight the difference: 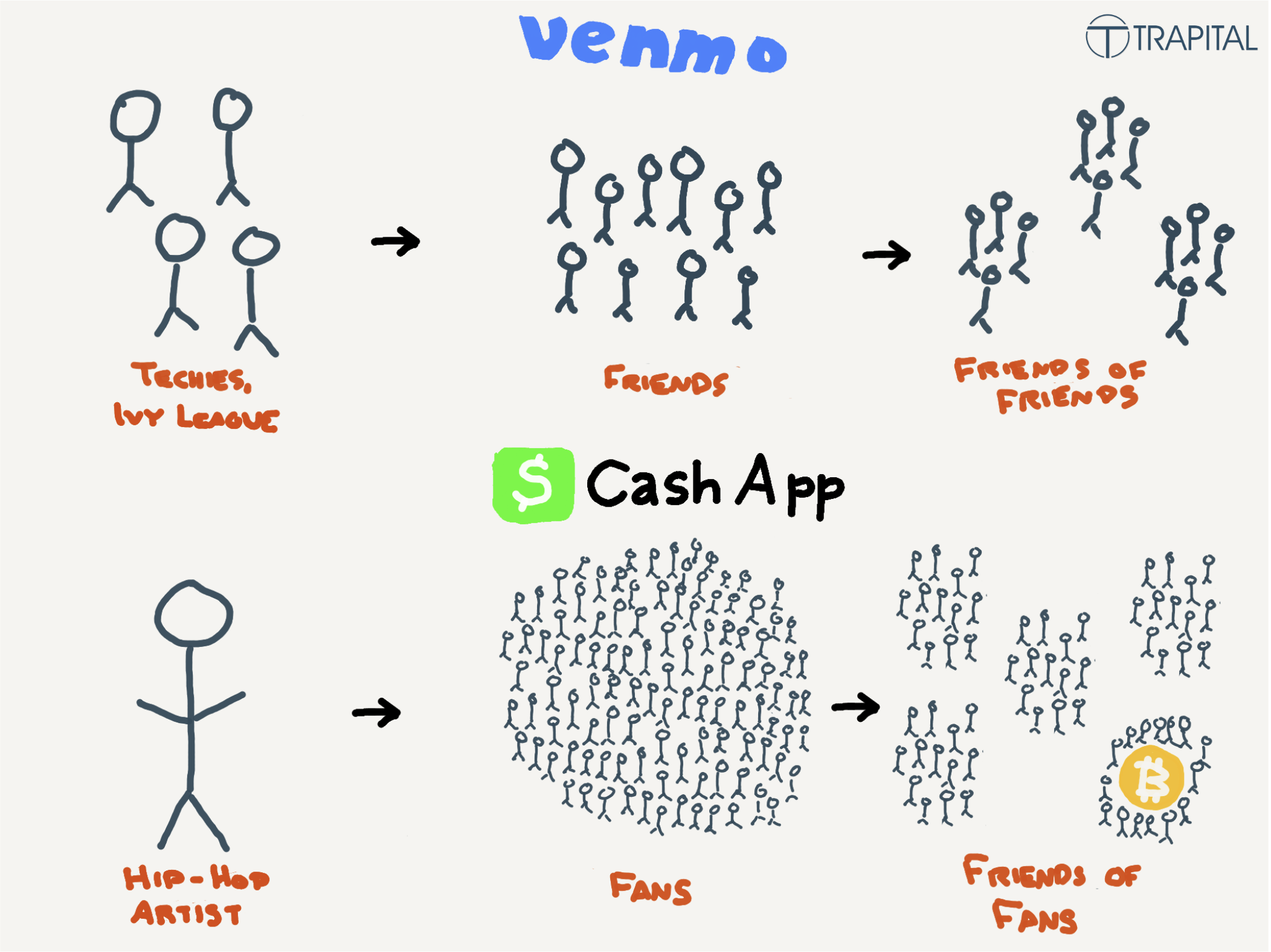 Cash App’s strategy is a true flywheel that drives more peer-to-peer transactions. The hip-hop influencers and their fans grew the user base and brand awareness further, which gained the attention of those who seek higher-end services like Bitcoin and Investing. 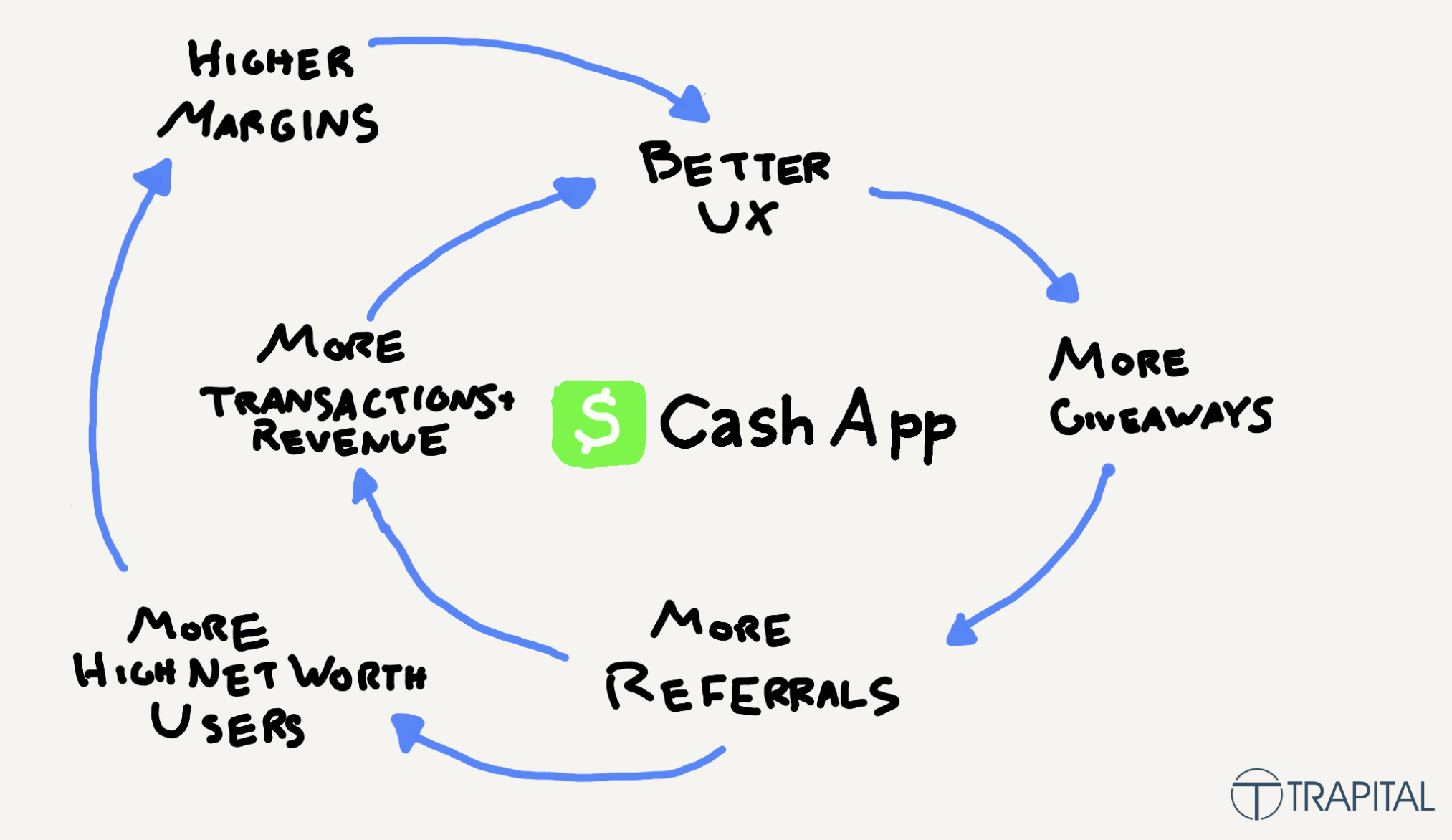 It’s similar to Jay Z’s flywheel with his 4:44 release. Here’s what I wrote last year:

Jay Z made a sale that valued the company at more than 10x his purchase price just two years earlier. That’s impressive especially with all the turmoil and controversy that surrounded Tidal during that stretch.

But the real kicker is that $75 million was budgeted for exclusive content for Sprint. Five months after the deal was publicized, Jay Z dropped 4:44 as a Sprint-Tidal exclusive. This connected the streaming service with Sprint, which now had a vested interest in Tidal’s success (not too different from Live Nation’s interest in Roc Nation). And by partnering with a cellular carrier instead of a manufacturer like Nokia or Samsung, Jay increased his flexibility and integration capabilities.

Jay Z distributed his album through Sprint because it has an active customer base and a means to deliver his product. Sprint was now a co-owner of Tidal, Jay’s streaming service. The cellular carrier had a vested interest in both the delivery and implementation. And Sprint customers got the album for free. Everybody won.

In this next decade, Cash App’s customer acquisition tactics will be replicated by many. Products that are built to serve the mass consumer will waste time if they religiously follow Silicon Valley’s age-old mantra to “start in San Francisco and New York” and expand from there. That traditional plan still makes sense for a product like Superhuman, the $30 / month email service that’s specifically targeted at that who will pay for that. It’s less ideal for an app that relies on network effects and massive scale.

Mass-market products need branding. In consumer tech, hip-hop has been the backbone. TikTok had Lil’ Nas X. Snapchat had DJ Khaled. YouTube had Soulja Boy. The list goes on. Hip-hop culture influence continues to grow, and more companies will find their own way to engage fans.