The Houston rapper became a superstar by finding arbitrage opportunities in the industry and exploiting the hell out of them.

Last week, the space150 agency introduced the world to TravisBott: the mumble-rapping, AI robo-rager that you never asked for. Here’s his new music video:

The agency could have picked any artist for this R&D project, but the “Sicko Mode” rapper was a perfect fit. In October, NPR wrote this prophetical article about his single “Highest in the Room”:

Produced by OZ and NIK D, the track should sound familiar to Scott’s fans. In fact, “HIGHEST IN THE ROOM” is what it’d sound like if you told an AI to make a Travis Scott song.

If this agency didn’t release TravisBott, the rapper would have probably done something like this himself!

Travis Scott has spent the last few years landing every opportunity to maximize his place in hip-hop. The 27-year-old is one of the superstars most associated with millennial hypebeast culture. He’s given fans endless album bundles and continuous merch drops. While Lil’ Nas X is often called rap’s growth hacker, it’s Travis Scott who has best worked the system to achieve sustained success. His tactics may upset the apple cart, but it’s a tradeoff that’s more than paid itself off.

It’s been eighteen months since Astroworld dominated the charts and further exposed the ills of Billboard’s charting methodology. Billboard requires at least 1,250 streams to count for one album. In other words, you would have to listen to a 60-minute album over 80 times in a week to register a first-week album sale. Who the hell has time for that?? This places more weight on digital album downloads, which are meaningless to anyone with a Spotify or Apple Music subscription. To encourage album sales, Billboard allows bundling with items that superfans love, like merch and concert tickets.

While most hip-hop artists play this game to some extent, Travis Scott brought it to an unapologetic level. He built a 24-hour model to maximize sales:

Every day for the nine days following Astroworld’s release, Scott unveiled new pieces as part of a 28 item line. His website updated every 24 hours and once the new merch popped up, yesterday’s tees and ashtrays and slides disappeared. On the last day of the drops, August 10, the same day [Nicki Minaj] released Queen, Scott unveiled a t-shirt designed in collaboration with Virgil Abloh. A day later that, too, disappeared and was replaced with a whole new line of merch, this time for his Cactus Jack label and Astroworld tour. Every purchase came with pre-sale access to concert tickets and a redeemable download of Astroworld. The hypebeasts came hungry, and Scott fed them, all on his way to a number one album.

“The hypebeasts came hungry” is no joke. This YouTuber bought every, damn, item!

Astroworld blew its first-week sales projections out of the water with 537,000 units sold. More than half were pure album sales, largely driven by bundles. Nicki Minaj, whose album debuted behind Astroworld, aired her gripes out on Twitter. The “Starships” rapper had her own bundles for Queen, but still took issue with Travis’ tactics.

Unfortunately, it’s human nature to hate on those who succeed at exploiting the same rules. College basketball head coach John Calipari took hell for drafting one-and-done players, but the model has since been normalized. In the NBA, the Houston Rockets maximize analytics with three-pointers, layups, and drawing foul calls, but it’s not like other teams are out here relying on elbow jumpers.

Whether it’s Travis Scott, Calipari’s Kentucky Wildcats, or James Harden, those who maximize these rules take a theoretical gamble. They trade away the goodwill of “doing things the socially acceptable way” for a competitive advantage. If the goal is to win, these folks want that W. Their odds at winning will increase, and they’ll accept the shame that comes with it.

Astroworld’s rollout worked so well that Travis has ran back several elements since. In November 2018, he launched a Cyber Monday album bundle for Astroworld, a new “Sicko Mode” remix with Skrillex, and had his then-girlfriend Kylie Jenner post concert footage from backstage at Madison Square Garden, all in the same week. His album topped the charts again four months after its debut—a rare feat in the streaming era.

Astroworld was his life’s work. He told fans about it well before he dropped his 2016 album Birds in the Trap Sing McKnight. I was critical of this timing, which I wrote about in September 2018 in How Travis Scott Cannibalized His Own Success to Promote Astroworld. But in the wake of his Super Bowl halftime show appearance, Netflix special, and Coachella headliner status, I got this one wrong. It’s clearly worked in his favor.

I’ve written extensively about why rappers run their own music festivals. It’s a high risk-high reward opportunity centered around the artist betting on the strength of their brand. Most artists pride themselves on beating the odds to make it this far. Who wouldn’t want in on that?

While most festivals sell fans on promising lineups, Astroworld Fest is the exact opposite. Astroworld hides the lineup until the day before the show and still sells out 50,000 tickets well in advance. And it’s not like his lineups lack power. Last year he had Megan Thee Stallion, DaBaby, Migos, Young Thug, DaBaby, Pharrell, and Gucci Mane! That roster could sell out a festival itself. But the point is to sell tickets on Travis Scott’s name. Everyone else is icing on the cake.

This strengthens Scott’s value-add to sponsors relative to other festivals. Bonnaroo may attract more fans, but those fans have less of a unified identity. Also, a growing portion of those Bonnaroo attendees are influencers, so they’re not necessarily true fans. Meanwhile, if someone is willing to pay up to $550 for a one-day ticket to a festival where the only known performer is Travis Scott, it narrows the customer profile dramatically. That’s a win for Travis and companies that want to advertise to that customer.

The next level is business-to-business

Travis Scott’s next album is almost guaranteed to top the charts. “Highest in the Room” debuted at #1 thanks to a merch bundle, which will carry over to its first-week album sales. Now that Travis has mastered this game, it’s time to level up. He should follow Jay Z, who turned his albums into enterprise sales products.

From The Black Album to 4:44, Jay Z partnered with different cell phone manufacturers and carriers to buy his album and sell it to their customer base. He leveraged their audience and distribution. The rollouts weren’t perfect, but they got the job done. 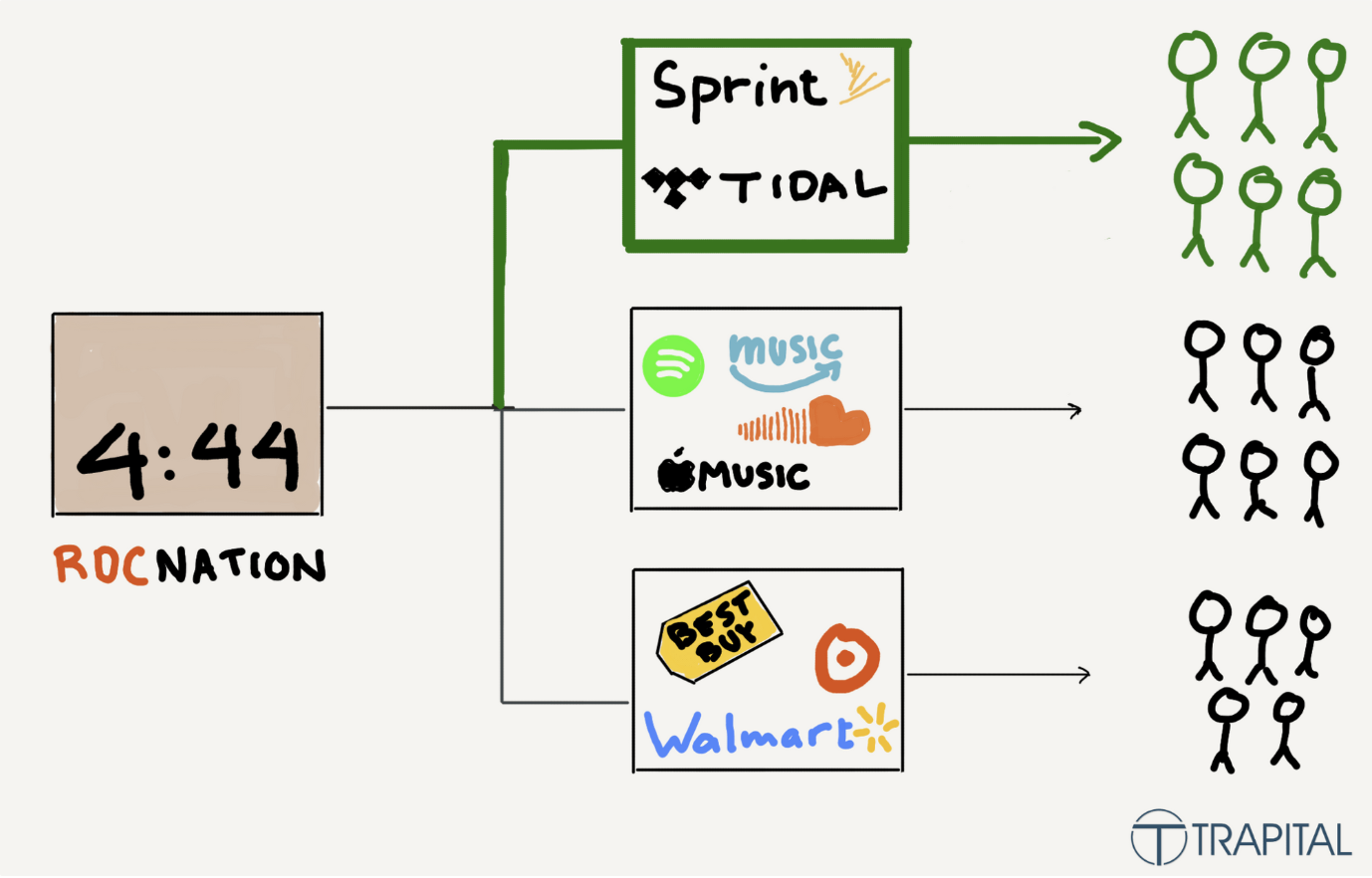 The distribution channels for 4:44. The top box is the exclusive partners, who got initial access and their customers (green). The second box are the other digital streaming providers, and the third box are the brick-and-mortar retailers.

“Earlier this year, Jay Z struck a deal to sell 33 percent of his streaming service Tidal to Sprint for $200 million, raising the valuation of the company to $600 million. Sprint announced the deal would include Tidal artists releasing “exclusive content that will only be available to current and new Sprint customers,” and a $75 million budget to fund and market that content.”

Jay Z made a sale that valued the company at more than 10x his purchase price just two years earlier. That’s impressive especially with all the turmoil and controversy that surrounded Tidal during that stretch.

But the real kicker is that $75 million was budgeted for exclusive content for Sprint. Five months after the deal was publicized, Jay Z dropped 4:44 as a Sprint-Tidal exclusive. This connected the streaming service with Sprint, which now had a vested interest in Tidal’s success (not too different from Live Nation’s interest in Roc Nation). And by partnering with a cellular carrier instead of a manufacturer like Nokia or Samsung, Jay increased his flexibility and integration capabilities.

It was the ideal partnership for Jay Z. The 4:44 launch still wasn’t perfect, but it was the best example yet. Technology enabled the distribution, joint ownership, and vested interest of all parties involved to get the product in the hands of the target consumers.

Nike SNKRS App:
Travis Scott has already released 10 sneakers in collaboration with Nike-Jordan Brand. SNKRS has become the bane of existence for sneakerheads, but it’s an app that Travis Scott’s core fans likely have on their phone. Nike could buy a few million copies of Travis’ next album and make it redeemable through the app. In turn, this increases demand for future sneaker drops.Additionally, the SNKRS app and its customers are already used to click races during peak demand. The same can be done when the Travis Scott album is available for download. Can you imagine if Nike handled digital album downloads more smoothly than Samsung and Sprint did for Hov’s albums? I would hope Nike’s social media team would have their jokes ready.

Square’s Cash App:
It’s the digital money transfer service most associated with hip-hop. In 2018, La Flame gave away $100,000 to fans who quoted Astroworld lyrics on Twitter with their $cashtag.Square could buy 5 million copies of Travis’ next album for $5 each. Cash App users can download the album for free if they send/receive at least $500 on the app within 30 days. It would accelerate Cash App’s growth, which is last reported at 15 million users. The minimum spend requirement is similar to a credit card bonus that requires users to spend $5,000 in the first three months. It’s more data for Square, and the ease of use may increase the likelihood of a lasting customer that uses future Square products.

Travis Scott doesn’t have to pick one, he could do both deals. It’s a win-win that would get covered by every hip-hop news outlet. Folks would continue to debate whether Scott is smart or if his tactics ruin the sanctimony of album sales. Either way, the attention ensures another multi-platinum chart-topping album, exactly as planned.

If Travis Scott ran a digital media company today, he would have banner ads on every website, Instagram ads that make you say, “…is this MF listening to my conversations?”, pre-roll on every podcast, and the most absurd referral bonuses imaginable. Most album bundles already run at a loss, so customer acquisition costs would be through the roof. But you think La Flame cares? He’s not bootstrapping a startup. He has money and connections, and he’s not afraid to use it.

Universal Music Group CEO Lucian Grainge once implied that Drake has an unlimited budget. The same is likely true for Travis Scott at Epic and Sony. But while many of his peers may hesitate to take them up on that offer, Travis wouldn’t. Love it or hate it, it’s how he got to where he is.