Why Hamilton Partnered with Disney

Lin-Manuel Miranda’s hip-hop musical has made timely efforts to maximize its IP, and teamed with Disney to (inevitably) take it to the next level. 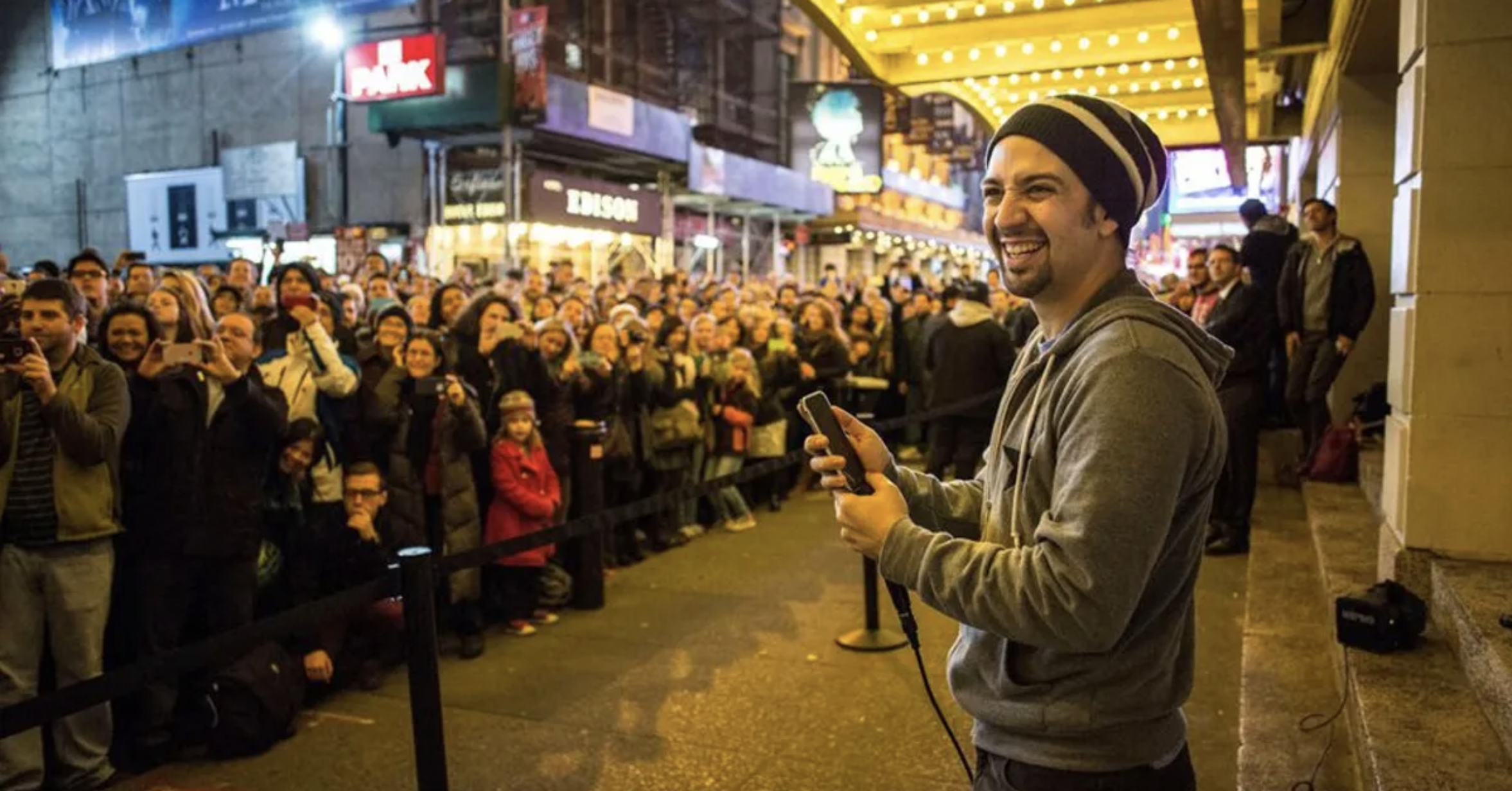 Lin-Manuel Miranda has not one, but TWO movie deals underway. Last week the 40-year-old playwright agreed to a $75 million deal with Disney for the movie rights to Hamilton: The Musical. In 2018, he agreed to a $50 million deal with Warner Bros for the film rights to In The Heights which hits theaters in June. The Tony Award-winner is one of the few people who can legitimately say, “I’ve been in my bag all year.”

But the deals for Hamilton and In the Heights are drastically different. In The Heights is a traditional film adaptation with a major studio, similar to Les Miserables, Rent, and Chicago. Hamilton is a partnership with Disney, an entertainment behemoth with enough tentacles to squeeze every ounce of life from the IP of Miranda’s hip-hop post-colonial musical. This deal is only for the movie rights, but let’s not be naive. This is just the beginning.

Miranda and Hamilton’s lead producer Jeffrey Seller have already extended the experience through exhibitions, mixtapes, fan engagement, merchandise, and more. While others may pause at any risk to cannibalize a musical that generated $500,000 a week in profit, Hamilton’s expansion will drive more interest to the core product. These moves laid the groundwork for future expansion with Disney.

Typically, the most popular Broadway musicals are still a few steps removed from the apex of pop culture. The Book of Mormon was massive, but you could live a normal life and not know much about it. Hamilton was bigger. Remember, the U.S. Treasury had plans underway to replace Alexander Hamilton on the $10 bill. Plans stopped because of the founding father’s sudden rise in popularity.

Cultural phenomenons rarely reach peak levels of mania unless they capture the moment. For Hamilton, that moment was its lasting bond with the Obama administration. In 2009 (six years before Hamilton hit Broadway), Miranda was invited to the White House Poetry Jam to perform “Alexander Hamilton.” The existence of a black president was the perfect parallel for a screenplay where our founding fathers were replaced by black and brown rappers. Obama himself got name-dropped in rap songs left and right. He hosted rappers at the White House. Hip-hop was part of the president’s identity.

But while cultural phenomenons can be lucrative, they present two business challenges. First, they all have shelf lives. Whether it’s Beanie Babies, Guitar Hero, or Fetty Wap’s summer ’15, nothing lasts forever. This is especially challenging in an industry where the standard for success is an institutional cash cow like Phantom of the Opera.

Second, the economics of phenomenons are more art than science. The limited capacity and high ticket prices drove the high demand. If supply increased too quickly, then the scarcity would be gone and the fan experience would diminish.

Hamilton became a Veblen good. But unlike most Veblen goods (Rolls Royces, Balenciagas, red bottoms) Hamilton may not stay that way forever. It will have a long run on Broadway for some time, but there’s still a carryover effect from the mass hysteria in 2015 and 2016.

There was a consumer surplus at several levels. Ticket scalpers earned an estimated $60 million from Hamilton in 2016. Many felt that the tickets were STILL underpriced at $849. Also, fans who were willing to pay a few hundred bucks per ticket (which would still yield a great profit) were priced out of the market. There was no accessible way to serve folks who were willing to pay but couldn’t. It’s a great challenge to have, but it’s still a challenge.

Seller, who worked with Miranda on In The Heights, was intentioned about his efforts to make Hamilton a lasting experience despite the quick rise in popularity. From The New York Times:

“We don’t want this to be a show that lasts for four years and everybody says, That was nice. We want people who come to New York to say: I want to see the Statue of Liberty, go to the top of the Empire State Building, walk in Central Park. And I want to see ‘Hamilton.’ ”

The team chose not to do a Super Bowl commercial (Sellers said it was a waste of money) or participate in the Macy’s Thanksgiving Day Parade, but they did do the opening musical number at the 2016 Grammys. From the same New York Times article:

The Grammy producers had wanted the cast to appear at the Staples Center in Los Angeles, but Seller told them he would participate only “if we can use our theater, our stage and our lighting, so America can see what ‘Hamilton’ really looks like.”

Seller and Miranda moved forward with the initiatives that could add similar value. #Ham4Ham was Miranda’s way to engage with the hundreds of fans who waited outside the theater for $10 lottery tickets. Two hours before the show, cast members would step outside and engage with the crowd or do a quick number. Most fans in line had no chance to get in that building, but it was a great way to build a connection. Here’s an example:

The benefits are similar to what I wrote about in J. Cole’s Dollar & a Dream Tour. The $1 concerts made J. Cole’s day-one fans feel more devoted. The spontaneity built stronger fandom from those who didn’t attend but still heard about it, much like Ham4Ham.

The experience was also extended through The Hamilton Mixtape, a re-recording of the original album with hip-hop stars. There were other spinoff products too, like an instrumentals album, Hamiltunes sing-along events, and the Hamildrops series of songs inspired by the musical (which featured President Obama himself).

But some expansions performed better than others. Hamilton: The Exhibition—a deep dive on the founding father— started in Chicago but shut down after a few months. Some blamed its lackluster success on the less than ideal location in the Chicagoland area, but the exhibition was canceled in other cities where those logistical challenges could have been addressed. Others felt it was too much “Alexander Hamilton” and not enough “Hamilton.” Go figure.

It’s not a coincidence that the most intensive spinoff experience is the one that failed. There’s a market for an experience like this, but this wasn’t it. They would benefit from a partner like Disney that had a track record of success in this area.

Disney can add value where Hamilton could not

When the Disney-Hamilton deal was first announced, I tweeted this out:

Disney bought the rights to Hamilton for $75M. You know what this means:

I left out the obvious “Hamilton: Civil War.” Regardless, the writing is on the wall!

Since 2013, Disney has aggressively pursued Miranda like a TMZ reporter at a Love & Hip-Hop Reunion. The relationship led to Miranda’s work in Moana, Mary Poppins Returns, Star Wars, and Ducktales. In October 2021, fans will get to see a live capture of a 2016 Hamilton performance at their local theater, but a true film adaptation may be underway. The company’s core competency is IP maximization. It uses this same strategy with anything valuable that enters its sphere.

Disney famously lost the bid for the Harry Potter-themed amusement park to Universal because its proposal was too modest. It’s wild to think that Disney, the company carrying the blockbuster film industry on its back, thought too small. But Universal came stronger and has reaped the rewards. This remorse heightens Disney’s desire to not let that happen again, especially since Hamilton is one of the biggest phenomenons since Harry Potter.

Hamilton can be experienced at multiple levels 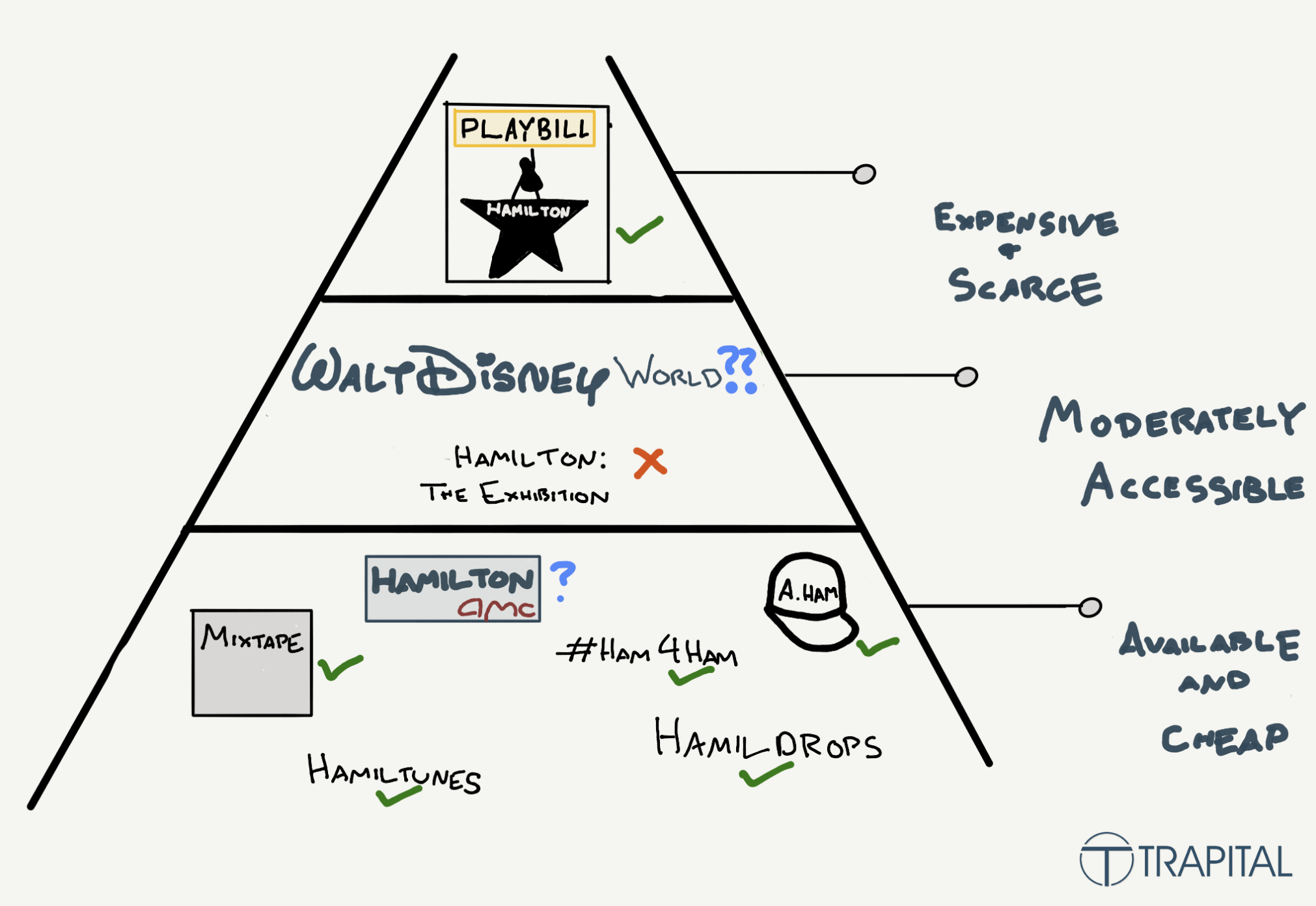 The core product of the most successful IP expansions—Harry Potter, Marvel, The Lion King, Pirates of the Caribbean—were all accessible to everyday consumers. As they grew, the experiences expanded both up and downmarket. Hamilton, however, started with the most affluent consumers in one of the most expensive cities. Conventional theory holds that it’s easier to move downmarket. Miranda and Seller’s strategy to date rests on that notion.

The typical Disney experience is geared toward those families who travel to amusement parks. These are not necessarily the same folks who are willing to spend $500 each on Hamilton orchestra seats and a $200 dinner in Midtown Manhattan after the show. The amusement park folks are still willing to spend money on Hamilton, but the stakes are different. Their spend would be part of the annual family vacation. For the customers furthest downmarket, they might listen to the soundtrack hundreds of times and buy merch. It’s a small purchase but it makes the experience accessible without cheapening the core product.

The Hamilton Entertainment Universe may be well underway. The 2021 movie release may bring Beyonce’s Homecoming levels of hype, which will continue when it hits Disney+. If Seller wants Hamiton to be the American institution it desires to be, he found the right partner. In the meantime, we’ll just brace ourselves for the inevitable Hamilton: The Mandalorian.