Below are five pieces of content that you should check out, and a Trapital Update on how hip-hop podcasts can better monetize in a changing landscape.

“The two deals we saw in the last week are similar and different in interesting ways: Penn National is buying Barstool’s brand and its audience, which it wants to turn into bettors; Spotify is also buying The Ringer’s brand and is definitely interested in its audience. But it also hopes that The Ringer will become the equivalent version of an in-house music label — a content-creation engine that will end up costing much less, per listen, than the stuff it has to license from the likes of Universal Music.”

To supplement our Series E fundraise led by IAC last summer, Turo is proud to announce that it has raised an additional $30 million from Manhattan Venture Partners (MVP), Allen & Company LLC, and others amounting to a total of $280 million in Series E funding.

This latest round of funding further strengthens our position as the global car sharing leader, and we’re personally very excited to welcome these pioneering investors into the Turo family.

Russ is back with his latest album, ‘SHAKE THE SNOW GLOBE.’ The tracklist includes the previously released cuts, “NIGHTTIME (Interlude),” “CIVIL WAR,” and “BEST ON EARTH.” This is his first LP since 2018’s ‘ZOO’ and he says he’s mellowed out since then — but will fans and enemies forgive his previous way with words?

The home of Howard Stern, led by CEO Jim Meyer, reports its latest quarterly and full-year results. Pandora lost 88,000 subscribers in the fourth quarter, with 4,000 new paid promotional subs more than offset by a 92,000 drop in self-pay subscribers, to end it with more than 6.2 million total subscribers. In the year-ago period, it had lost 85,000.

These numbers aren’t impressive by any stretch, but it will be interesting to see how Pandora’s exclusive content strategy takes shape. They will soon have original programming from UNINTERRUPTED, Marvel, Drake, and others. Revisit my update on The Pandora Content Universe.

How to Best Monetize Hip-Hop Podcasts

The Ringer and Barstool Sports acquisitions are noteworthy for the type of podcasts that both businesses rely on. These aren’t investigative, Ira Glass, This American Life-style pods. They are duos (or trios) giving their takes on the latest news in a particular space. Both networks expanded to 20+ podcasts to cover the entertainment and lifestyle interests of their audience. The Bill Simmons Podcast and Pardon My Take are consistently among the most downloaded podcasts each year.

These shows are easy to produce. Once the fixed costs are covered—production, salaries, overhead—there’s not THAT much more to be done. The hosts are already invested in their subject matter, so the “variable cost” of preparation is minimal. I’ve followed Bill Simmons since the early 2000s. He can do that pod in his sleep.

When The Ringer does investigative podcasting, it’s restricted to paid podcasting services like Luminary, which has struggled in its goal to become the HBO of audio.

The tiered approach makes sense in theory, but the mixed execution to date is a concern, especially for hip-hop. There’s some high quality, high brow, investigative hip-hop content out there. Mogul just completed its second season, which examined Uncle Luke’s 2 Live Crew and all the godforsaken things they got into during 1980s Miami. Dissect Podcast finished its analysis of Kendrick Lamar’s DAMN. Mass Appeal did a podcast on the notorious Freaknik. And Slow Burn finished its third season on the murders of Biggie and Tupac.

Each podcast relies on the same business model as The Read, Brilliant Idiots, and other easy to produce, ad-supported podcasts that cover hip-hop and black culture. Spotify’s #1 podcast of 2019, The Joe Budden Podcast, is much more like Bill Simmons Pod than Mogul.

I tweeted about this in October, which Budden agreed with: 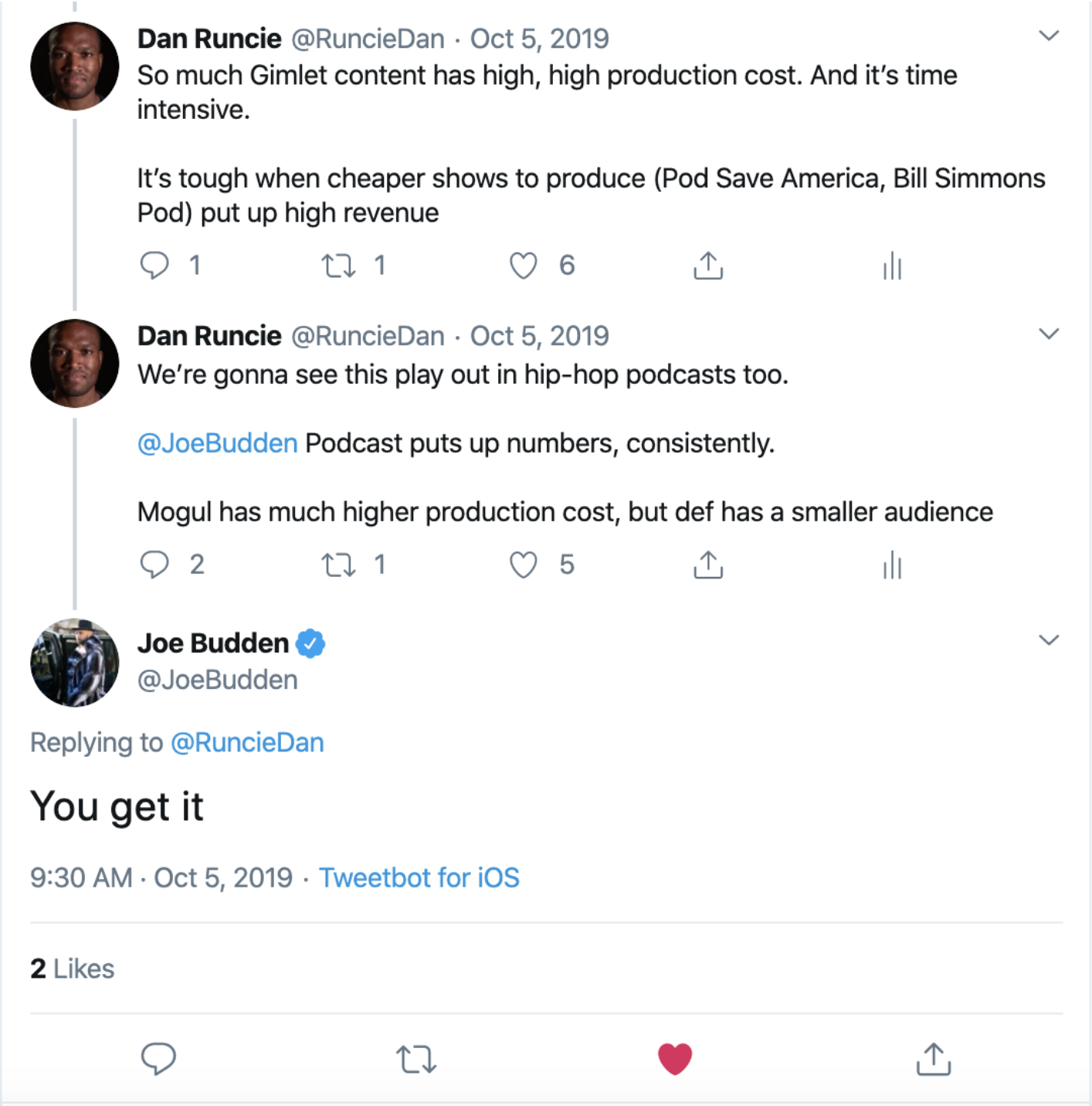 I’ve seen Budden’s pod in barbershops. It’s background noise on the weekends when friends hang out. It’s likely played in college dorm rooms just like SportsCenter was back when I was in college.

For ad-supported pods, quantity matters more than quality. Every pod needs to be strategic to attract its audience, but downloads numbers don’t distinguish whether the listener is a teenager with minimal consumer power or a tech executive with money to burn.

Hip-hop’s investigative podcasts have high consumer surplus. They try to cash in through merch and live podcasts, but that’s the same thing the low-cost, high volume podcasts do! These high-brow podcasters need to think beyond the standard $30 live podcast tickets and $30 t-shirts.

Slow Burn, Mogul, and Dissect benefit from an average listener has a higher willingness (and ability) to pay than the “here’s the last take” podcasts (I have no data to back this, but it’s an educated assessment). High brow content needs to monetize that high brow audience. Otherwise, what’s the point? Licensing content or partnering with HBO or another paid streaming service is a frequently mentioned goal, but think more broadly too. What are the high profile events or formats that the audience is willing to engage in? What would a high-end dinner and talk look like? Or a conference in collaboration with other creators? A high-end experience? Opportunities out there.

Quality, not quantity is why this type of content is valuable in the first place. Monetization needs to follow the same strategy.