Hey! Yesterday’s article has been shared quite a bit. If you haven’t already, read it here and share with a colleague!

Today’s update covers business opportunities in hip-hop and gaming, French Montana’s fake stream scandal, and how virality has boosted the success of Roddy Ricch’s “The Box.”

Last week, media analyst and venture capitalist Matthew Ball wrote an interesting breakdown on why video gaming will take over. There are several takes that I think are relevant for those who want to figure out what’s next in hip-hop.

He boiled it down to seven reasons:

The strongest one was #3. Here’s a long, but worthwhile part:

“…while traditional content can seed consumers imaginations, it can’t really participate in it, let alone leverage it. Star Wars, for example, spawned billions of hours of imaginary stories that were locked in the minds of children and acted out only in a family basement or yard. A franchise could facilitate this story creation, but only via making rich films/TV/books/comics and selling toys that were fun to use — but they couldn’t access it, nor could these independent “imagineers” really share it with their friends (especially those who didn’t live nearby).

None of this is true in gaming.

Most superficially, games are often designed around ancillary content that exists outside the core story – badges, side missions, and so on. While this requires additional programming, it typically achieves significant leverage over prior investment (e.g. characters, items, stories, programming). The fact that it’s optional also means that it’s only completed by those who desire more playtime, and thus doesn’t dilute the experience in the same way a 7-hour TV series over 13 hours might. As a single-player game, Red Dead Redemption 2 can be 47 hours long (main game), or 76 (main + core extras) or 161 hours (to complete everything).

More broadly, games are increasingly driven by social experiences. A gamer isn’t playing to “complete” a story, they’re playing because they love competitive play – especially play with their friends. And given no multiplayer experience is the same, there’s always a “new story” that can be played. Red Dead Redemption 2’s online experience only ends when your friends all bore of it.

Two great points here. First, the optional ancillary content is key. Fortnite, Red Dead Redemption, and Grand Theft Auto all have single and multi-player storylines that users can decide how much they want to engage. The extras are available, but not required.

Similarly, TikTok (and Vine before it) are popular because of engagement. Power TikTokers can use their imagination—like Star Wars fans back in the day— and put their ideas into the world through memes and videos. Moderate users can share, compile, and repost their favorites with friends. Light users can aimlessly scroll and stop on what interests them. Both the games and apps found a way to monetize engagement, which is why its popularity is soaring.

This trend should excite anyone who understands the rise of hip-hop’s popularity. The crossover opportunity with gaming is high as ever. Sure, it was cool to see Drake, Travis Scott, and Ninja play Fortnite together, but that’s a surface level opportunity. Artists have their IP, likeness, and music leveraged in films and TV. Video games are the next level.

There are past versions of this, like 2004’s Grand Theft Auto: San Andreas which was heavily influenced by the 90s west coast g-funk era. But that was before online multiplayer truly took off. Technology has improved, and hip-hop is far more mainstream than it was back then.

Imagine a 2020 version of Grand Theft Auto but with the IP and rights to a classic hip-hop story? The setting could be Queensbridge in the 80s, Miami during the 2 Live Crew era, or Atlanta in the early 2000s. We already have vivid pictures of those eras from all the great hip-hop albums, documentaries, and podcasts. The licensing and IP might be a nightmare to sort through, but if this type of experience was done well, it would make a ton of money.

We are past the days of games like Def Jam Vendetta. There’s a huge opportunity here. Gaming (as it relates to the business of hip-hop) is an area I will give more coverage to in 2020.

Ok. I said I wasn’t gonna cover anything about this stupid beef between French and 50. I lied. I’m breaking my promise. But it’s for a good reason! There are fake streams involved and it’s important for you all to know about it, especially since at least 80% of you have used Spotify at least once in your life.

It all started with a Twitter thread from @karlamagne that uncovered two things:

I mean, it’s hard not to laugh and the pettiness. I can totally see 50 Cent doing this, but I can also see French trying to play it off. I honestly don’t care who did it. The real story here is how fake streams happen in the first place.

It’s all shitty, especially for indie record labels that split revenue amongst its acts. The artists that get the artificial boost take away from others. Sources predict that 3-4% of all streams are illegitimate. It was just reported that there were over 1 trillion U.S. music streams in 2019. That’s still 30 billion illegitimate streams! If we use $0.007 per stream as the average artist payout, that’s over $200 million worth of artist revenue that’s illegitimately earned.

The French Montana situation is especially sneaky though. The streams went to a song that was already getting a boost on TikTok, which made it easier to fly under the radar of success. It reminds me of the steroid era in Major League Baseball. It was easy to justify Mark McGwire or Sammy Sosa’s homerun dominance as their skill level. They were homerun hitters before PEDs. But when nontraditional homerun hitters like Brady Anderson and Luis Gonzalez started belting 50+ homeruns in a season, it was easier to pause and say “what the hell is going on?”

This also highlights how easy it is to still scam this system. The individual tweets about the French Montana hack didn’t raise flags, but @karlamagne’s thread did. But what if the hackers covered their tracks and boosted streams on all DSPs evenly? It would have been harder to hide under that guise. What about all the streaming manipulation instances that happen with artists that aren’t mainstream like French Montana, or aren’t involved in a current beef that garners them additional media attention? Imagine the cases that happen all the time that never make the news.

DSPs still have a long way to go to combat this challenge.

Roddy Ricch and the power of memes

One of the biggest wastes of time is when artists and their teams try to force virality. A forced meme may work on occasion (e.g. Drake’s “Hotline Bling” music video, or his VIEWS album cover), but most of the time it falls flat. Lil’ Wayne’s #UproarChallenge fell flat, as did Beyonce’s #BeforeILetGoChallenge. The best ones are completely organic.

The latest example is 21-year-old rapper Roddy Ricch. His song “The Box” has blown up in large part because of this TikTok meme: 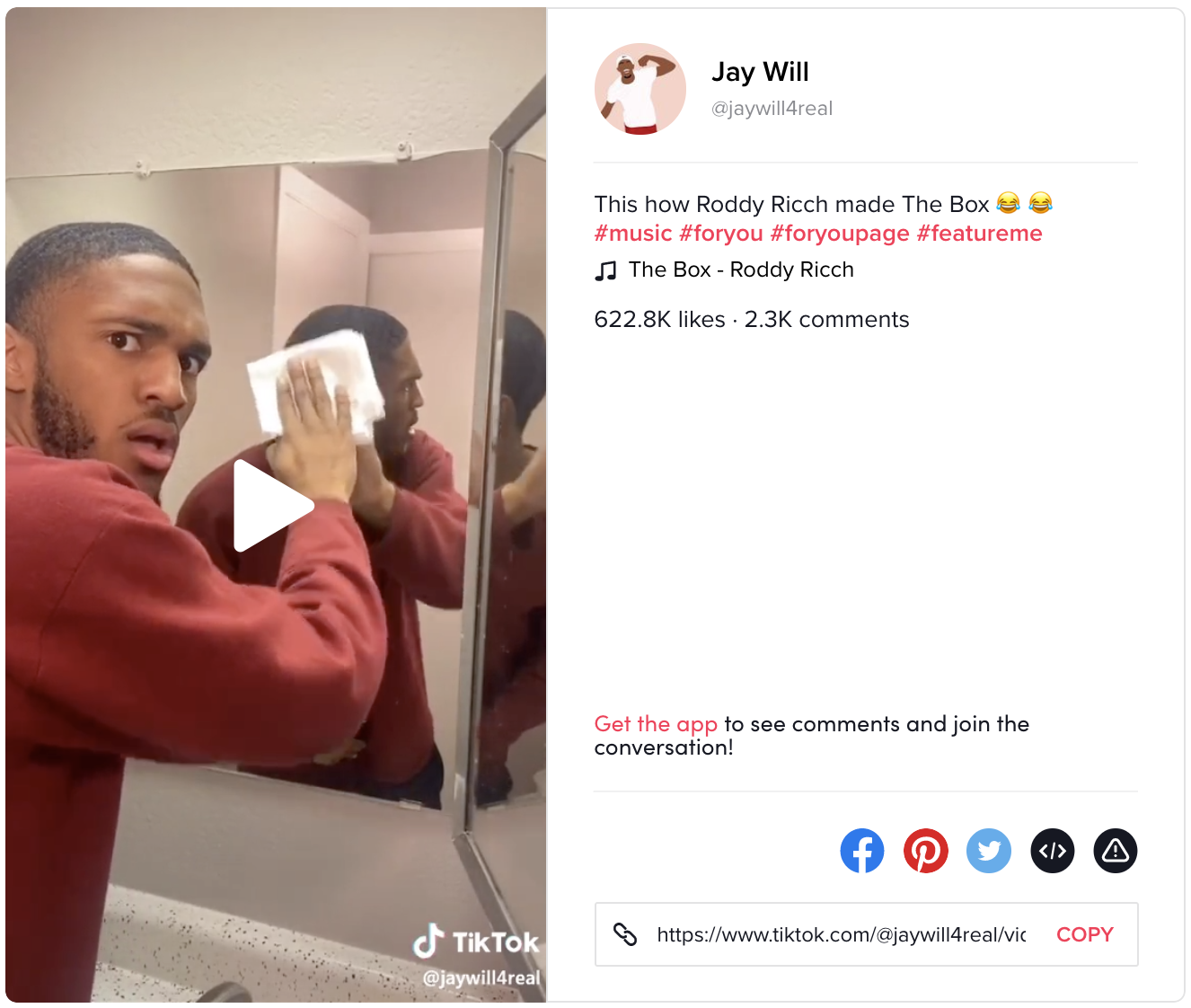 I’ll be honest, the first time I heard this song wasn’t from that meme or Roddy himself. It was when this Instagram clip blew up from that dude who looks like Rick Moranis and sings rap songs in his car:

Artists can’t force these things! They just happen. Teams and their managers should spend less time trying to create memes, and more time ensuring that the quality is consistent so that if/when the memes happens, they can capitalize.

When “The Box” blew up, Roddy’s team started getting asked how the beat was made. They were interviewed in this Genius video clip:

The music video for “The Box” hasn’t been recorded yet, but you can bet that the team will tap into these memes as Drake did for “In My Feelings” with the Shiggy Challenge back in 2018.

The song is currently #3 on the Billboard Hot 100. There’s a competition brewing between “The Box” and “Yummy,” Justin Bieber’s new song which he desperately wants to reach #1 on the charts. Knowing how polarizing Justin Bieber is and how some folks may want to spite him, Christmas might be coming early for Roddy Ricch.