The Hip-Hop Touring Business is Broken

More rappers will pursue alternatives to the costly, risky, and exhausting business of touring. 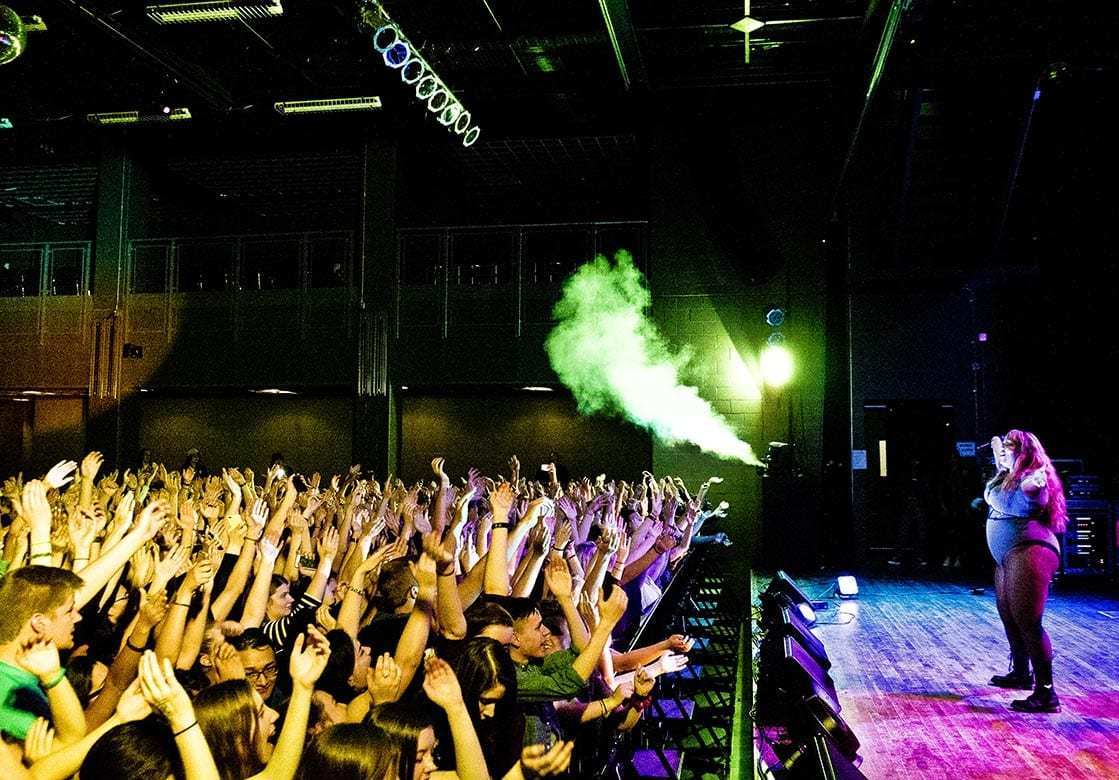 Lizzo at a concert in Minnesota (via Manitou Messenger)

Touring’s traditional model needs work. Cancellations have happened for years, but this recent wave is different. Many hip-hop artists overestimate demand for ticket sales. We live in an era with endless data, but touring decisions still seem like the industry blindly throws darts. Meanwhile, artists who can sell out those same venues have proudly taken new approaches. These trends are connected.

The popularity of music festivals and concert residencies have added new variables to the live performance mix. Mainstream artists are on a quest to maximize each option. Some are farther along than others. But by the time the majority of rappers find the ideal balance, the touring business might be behind the curve.

Opportunity cost is higher than ever

When artists are on tour, they’re on the road day-in, day-out. It’s traditionally seen as a justifiable tradeoff since many artists earn a majority of their revenue from touring. But it’s still time-intensive, laborious, and costly.

Here’s what I wrote in 2018 in Why Choosing the Right Concert Venue Matters:

A few years ago, Beyoncé, like Drake, once played it safe with concert tours. In 2013 and 2014, The Mrs. Carter World Tour earned an impressive $230 million, but it took Queen Bey 132 shows and twelve months of touring to do so…

Had Beyoncé subjected herself to the same arenas for [On the Run Tour, The Formation World Tour, and On The Run II Tour], she would have needed to perform an additional 207 shows since 2014 to match the $565 million her concerts have grossed in revenue. It would have been impossible to do all those shows while pregnant with the twins, make Lemonade, and do all the other stuff Beyoncé does.

There’s only a handful of artists like Beyonce who can justify the jump to a stadium. For the rest, festivals and short-term Las Vegas residencies are a viable alternative.

But even Taylor Swift has moved on from stadium tours. This summer the 1989 singer will do a European festival run (like Cardi B did last summer), then launch her own festival, Lover Fest, in Boston and Los Angeles. It doesn’t get more 2020 than that.

In an August interview with Ryan Seacrest, she explained why she didn’t do a traditional tour:

“I’m not quite sure what we’re doing with touring. I don’t want to do the same thing every time because I don’t want my life to feel like I’m on a treadmill. There’s a lot that goes into touring that nobody knows about — like you have to reserve stadiums like a year and a half in advance, and that to me is a lot. With ‘Reputation,’ I knew that nobody would really fully understand the album until they saw it live, but this album is different because people are seeming to get it on the first listen.”

All that’s true, but let’s remember two things. First, Taylor is in a select group of artists who can sell out the Rose Bowl, Soldier Field, and MetLife Stadium on back-to-back nights. She wouldn’t forgo that opportunity unless it made financial sense. Second, she’s right about the challenge in reserving venues eighteen months in advance. It’s especially frustrating for those who rise quickly and can’t easily pivot. It’s a good problem to have, sure. But it’s still a problem.

Last year, Lizzo rose to stardom so fast that she outpaced her touring revenue. According to Billboard, last spring’s Cuz I Love You Tour was performed in front of crowds of less than 2,000 people, grossing just over $50,000 per night. To capitalize on her momentum, she came back in the fall with the Cuz I Love You Too Tour at venues that were twice the capacity. But by that point “Truth Hurts” was #1 on the charts and nominated for Grammys. She still couldn’t keep up.

My wife and her friends bought tickets for Lizzo’s October show in San Francisco. They bought tickets at face value back in May for $50. The week before her show they were selling on StubHub for $350! It was a scalper’s dream but an artist’s biggest frustration. All the value was captured by the secondary market. Sure, there’s a chance Lizzo pulled a Metallica-Live Nation and scalped her own tickets. But if that ever happened… whew buddy. The Lizzo hive (and the anti-Lizzo hive) would have burned the internet down by now.

Hip-hop has an uphill battle

The mentality required to succeed in hip-hop and touring is in direct conflict. Most mainstream rappers take pride in beating the odds. They had to bet on themselves to make it this far. Why stop now?

But touring requires far more pragmatism. It’s economics. When supply meets demand, everyone’s happy. Those economics can be especially challenging for hip-hop though, where its streaming popularity outweighs its touring performance.

In a 2018 Wall Street Journal article, Neil Shah broke down how hip-hop may rule the record industry, rock is still king on the road:

There are many reasons that rock remains so powerful on the road, including that, as an older genre, it had a head start on pop and rap. Giant tours by older rap icons like Jay-Z aren’t as common. Fans of newer hip-hop artists skew younger, including teens with less disposable cash, making festival gigs more economical than lengthy, sprawling tours.

“Drake can do four Madison Square Garden shows, but Phish can do 17,” says Peter Shapiro, a New York-based independent concert promoter. Especially in the day-to-day business of clubs and theaters, rock bands, he adds, “still have a huge impact.”

This can make it mistakenly easy for an artist who dominates on RapCaviar or SoundCloud charts to think they are ready for the biggest stages available. Of the top 10 global tours of 2019, none of them were hip-hop. In 2018, just one (Beyonce and Jay Z’s On The Run II). Genre plays a factor.

A good clip from The Joe Budden Podcast where they break down Chance’s canceled tour.


Artists bet on themselves, which is costly

Challenges arise when artists who were once the hot kid start to cool off and need to accept reality. They might not be DONE done, but their prime days are behind them.

That’s where Nicki Minaj and Chance the Rapper are at. Neither admitted that low demand drove their cancellations, but we can follow T-Pain’s humble advice and read between the lines. Several industry insiders believe that both Nicki and Chance couldn’t sell enough tickets to fill 25+ arenas across the US. (I also covered Nicki’s ticketing woes in the Globalization of Hip-Hop, Part I and Chance the Rapper’s in a recent Member Update.)

When both rappers first announced these tours, I thought to myself, “Who the hell gassed them up to think they can still command an arena tour? Who signed this off?” There are plenty of fingers to point, but honestly, neither rapper needed extra convincing.

Keep in mind, Nicki spent the past decade silencing doubters who never thought a female rapper could reach the heights she did. Chance proved the industry wrong as an indie rapper who won Grammys and did arena tours. Their brand is to stay resilient when projections told them otherwise. You wanna go back in time and try to convince them that the lackluster responses to “Chun-Li” and “Groceries” were signs of what’s to come? Yea, good luck with that.

Their mentality is understandable, but it distorts reality. And as more superstars like Taylor and Cardi consider alternatives to touring, promoters may be stretched to fill those same venues with artists who can’t compete in that weight class. It will inevitably lead to more cancellations.

There are levels to this

The traditional touring model is extremely linear. There are tons of venue options for rising rappers who want to perform for a few hundred or a few thousand people. But the leap to arenas (~15,000) is no joke. The jump up to stadiums (~50,000+) is even steeper. The artists at the in-between stages are more likely to leave money on the table or cancel because they couldn’t sell. 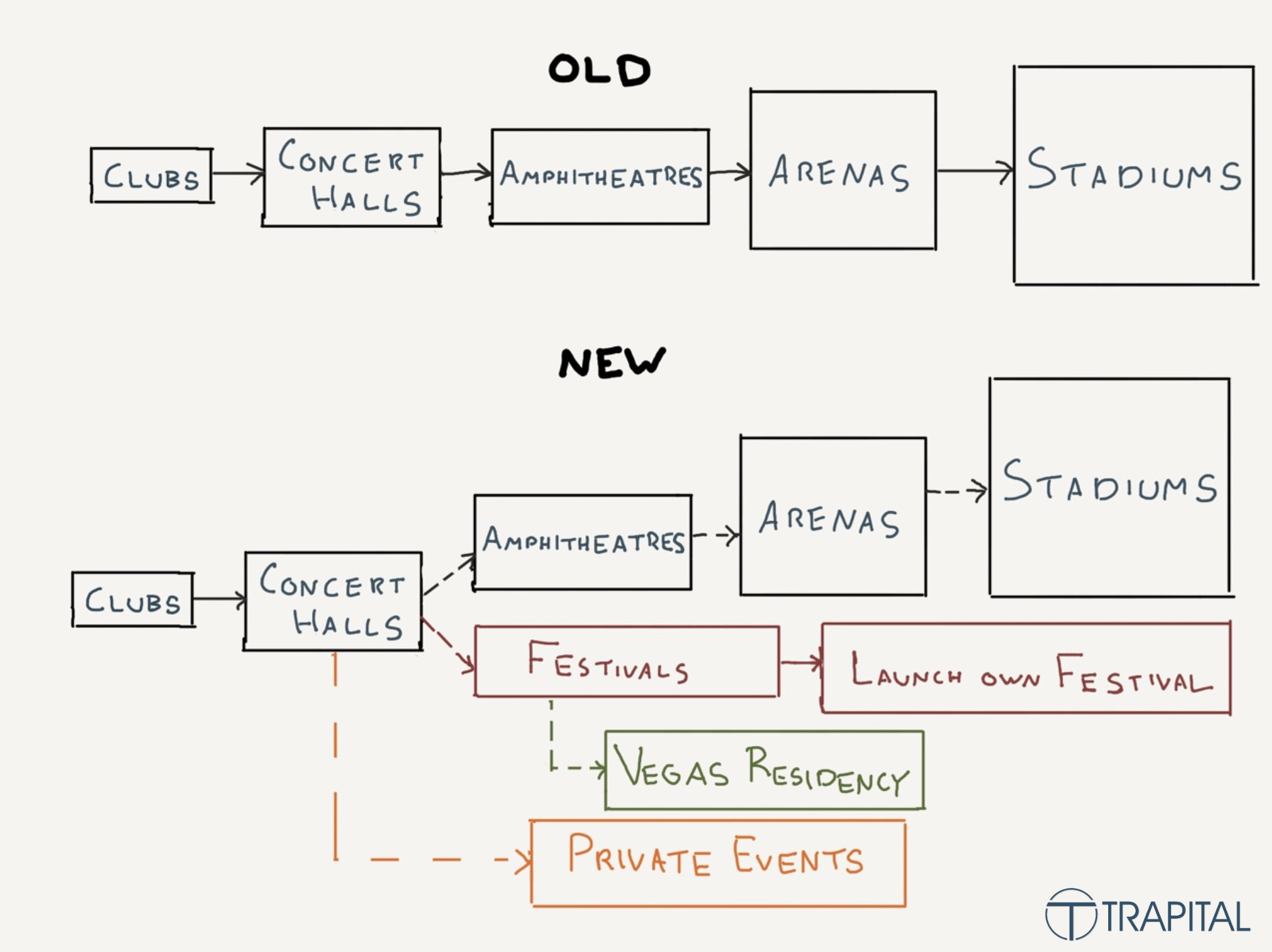 As AR/VR capabilities develop, more of them will be added to this mix too

I made a similar chart last year on how the traditional albums model has evolved with “mixtapes,” visual albums, podcasts, and more. The trend is similar here. Increased options lead to more experimentation and put artists in control.

Where is this all heading?

This trend should be top of mind for both Live Nation and AEG, which own and operate thousands of venues. It should also concern those who individually manage their venues.

I don’t expect arenas to shorten the timeline for advance booking or cancellation policies. That’s the nature of events in popular venues, whether it’s a wedding or a Migos concert. But they can lean into the trend by pitching themselves as locations for festivals, residencies, private events, or mixed reality experiences. It may be hard to compete against the machine of Coachella, but Rolling Loud and plenty of other festivals are more open to working with what’s available.

By now, every rapper with a big enough following has had at least wondered, “What if I launched my own Astroworld or OVO Fest? Should I do a Vegas residency too?” As I laid out in Why Rappers Started Running Their Own Music Festivals, artists want to leverage their power and run the show. They want the money from the highest profit margin areas of live performance, like sponsorship and concessions. It’s the same model that Floyd Mayweather uses in his boxing matches. He rents out the building and collects the revenue from everything else.

Touring will always be key for the up and comers who want to meet their day-ones. It worked for Meg the Stallion in the rooftop cypher days and Cardi B in the Love & Hip-Hop days. It will always be a core for the legacy artists who can draw crowds wherever—like Rolling Stones, Elton John, or Jay Z. But there’s a whoooole lot of artists between up-and-comers and Hov.

These artist want more options, and the market can offer them. The rest of the industry will be forced to adapt sooner or later.