Hey! As I mentioned on Friday, I have two announcements:

If anyone has questions on either, let me know. I have a few other announcements in the coming weeks too. Stay tuned!

If December 31 was a “trade deadline,” then Tencent and Universal Music Group came in at the 11th hour to finalize a deal that was months in the making. From Tencent:

Tencent Holdings Limited announced that a Tencent-led consortium and Vivendi S.A. today signed a share purchase agreement for the Consortium to acquire a 10% equity stake in Universal Music Group from Vivendi, at an enterprise value of EUR30 billion The Tencent-led Consortium is joined by Tencent Music Entertainment Group and certain global financial investors.

In my last Trapital Update of 2019, I was skeptical. The rumor mill was running wild about Tencent’s difficulty in finding co-investors. I expressed my doubts and rationale for why it wouldn’t happen:

UMG’s revenue has hit record highs on the back of streaming subscriptions. But investors likely fear that they are “buying high.” A 10% stake at €3 billion is no chump change. It’s essentially a bet on Spotify and the other DSPs to continue their high revenue growth…

Music content will always hold value. American culture still thrives on its musicians, and their popularity across the world has increased. But the monetization of that asset had ebbed and flowed in the past few decades. No one wants to buy at the wrong time…

It’s understandable for a potential buyer to want more control if it shells out billions of dollars for UMG’s content. But until someone decides to join, Tencent might be looking for additional investors for quite some time.

I still believe most of this, but I’m not stubborn enough to ignore the opportunity that this deal indicates. (I’m stubborn on some things, but this isn’t one of them!)

UMG and all the superstars on its roster will have stronger exposure to China. Tencent can more easily license UMG content, which earns more revenue for all parties involved. According to the LA Times, Tencent earns 71% of its revenue from “social entertainment,” such as karaoke, online live music, and interviews. That revenue mix that will also benefit Spotify, which also has interests Tencent and UMG.

Cherie Hu of Water & Music posted this great chart on the incestuous relationship between Tencent, UMG, Spotify, Sony, and Warner:

Here’s what I took away from this chart:

I’ll be the first to admit that Tencent and Spotify isn’t a fair comparison. If Spotify benefitted from a firewall in its home country that limited competition, like Tencent, it would probably be in a stronger position too.

Tencent now has the opportunity to acquire an additional 10% stake on the same terms by January 2021. Does Tencent want an additional 10%? Of course it does. It wanted a 30% stake just a few months ago. But can Tencent get more investors to contribute to the €3 billion to acquire another stake? This finalized 10% deal should make it easier to convince other investors, but we’ll see. €3 billion ain’t chump change, and no one wants to buy too high.

It’s early January, so festival season is upon us! Goldenvoice, the company that organizes Coachella and six other festivals, never wastes time announcing its lineup. In case you haven’t seen it, here’s the slate: 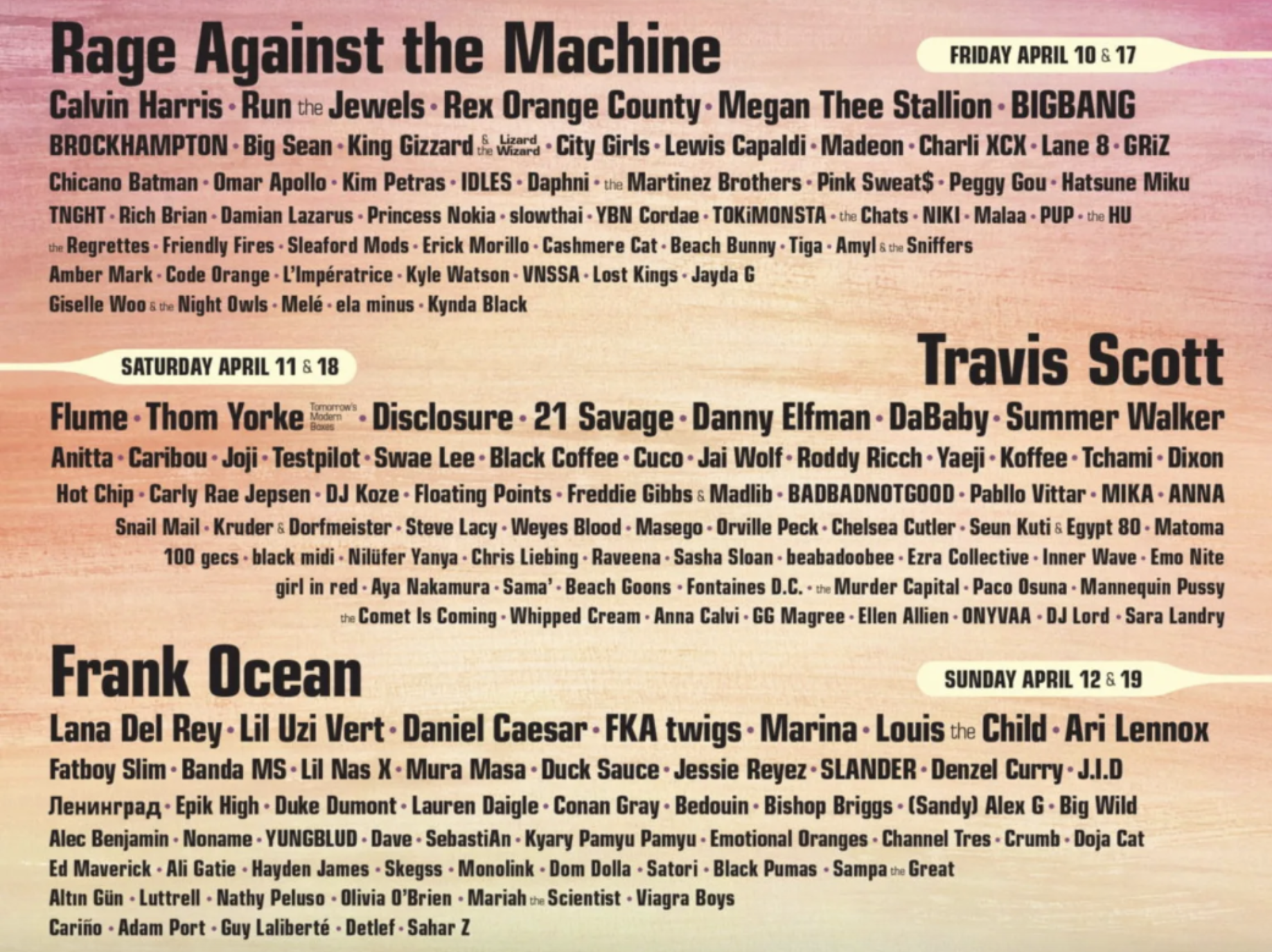 The row placement and font size debates are always fun. If an artist is too high, the bloggers will call them an industry plant. If an artist is too low, it’s a “snub.” For instance, why is Lil Nas X on row 3? Or YBN Cordae on row 5? Seems low for the artist with the biggest song of 2019 and a rapper who performed on SNL, respectively.

But that discussion gets boring quick. The far more interesting discussion is Coachella’s role as a bellwether of the festival business.

The lineup is full of hip-hop artists who broke out in the past 18-24 months. DaBaby, Summer Walker, Ari Lennox, Roddy Rich, J.I.D., Denzel Curry, Megan Thee Stallion, FKA Twigs, and Daniel Caesar have all taken a recent step up in their careers. These are the kind of artists who would trend well on social media. I assume Coachella probably asked Lizzo too, but it didn’t work out. If I had to guess, I bet Lizzo and her team declined the offer. Not because of money, not because of scheduling, but because she didn’t want to be listed on the second row when she considers herself headliner-worthy.

In 2017, Travis Scott was a Coachella artist with second-line placement. This was post Birds in the Trap Sing McKnight. But after Astroworld, the Super Bowl, Kylie Jenner, he’s now a headliner. The come up is real.

A lack of old school hip-hop! It’s not a coincidence. It wasn’t that long ago that OutKast headlined 40 music festivals. Gone are the days of Dr. Dre, Snoop Dogg, and Tupac’s hologram. Very few of these 2020 Coachella acts had songs on the charts back in 2014. Run the Jewels and Madlib are the only hip-hop acts born in the 70s. Big Sean, Frank Ocean, and Freddie Gibbs were the only hip-hop acts born in the 80s. It truly became a younger person’s game. Rage Against the Machine is the sole outlier in a festival that’s losing its status as a home for legacy artists.

This is largely influenced by the evolution of Coachella’s customer base. Not all festival-goers are valued the same. An Instagram influencer is more valuable to Coachella than a 90s music fan. Influencers bring in more money and attract more attendees and businesses. That wasn’t the case for the festival’s first decade in business, but it’s the case now.

Coachella’s lineup is heavily curated, but it’s far less reliant on big-time headliners than most other festivals. The Coachella brand is stronger than its competitors. Here’s what I wrote last year in Rolling Loud is Not ‘Hip-Hop Coachella’:

…That the machine still runs as long as there’s a healthy mix of pop music from yesterday and today.

That ‘machine’ is the ecosystem of influencers, digital brands, and pop-ups that help drive Coachella’s culture. In 2017, the Revolve clothing company bought hotel rooms and festival tickets for over 400 influencers, dressed them for the weekend, and asked them to Instagram their experience. The company also had a pop-up at Coachella for guests to snap pictures. According to Forbes, Revolve generated 4.4 billion social impressions as a result.

Influencers serve two roles for Coachella. First, they bring in dedicated guaranteed ticket sales. Companies like Revolve, Fashion Nova, H&M and others are willing to put them up and cover expenses. “[Coachella] gives us more opportunities to showcase our brand than a traditional venue like New York Fashion Week,” said Revolve’s co-founder Michael Mente in a Forbes interview.

Second, and more importantly, influencers drive demand with the general public. It’s the same reason why the Fyre Festival created that expensive promotional trailer with Emily Ratajkowski, Bella Hadid, and other models.

Even though Coachella is now driven by trends in pop and hip-hop, the organizers haven’t (completely) forgotten their alternative rock roots. For a while, there was still an attempt to cater to rock with one or two headliners, but it has trailed off in recent years:

This trend will continue over time. Festivals are a business. The more valuable the customer, the more attention they will get over time.

Some of you probably read this and thought, “Wow, I’m a less valuable customer at music festivals, huh?” And to be blunt, yes. Yes, you are. But it’s no different than other events you attend. If you buy last-minute tickets to a concert or game on StubHub, you’re far less valuable than a season ticket or box suite holder. The only difference is that no one dresses the box suite holders in the latest couture and asks them to livestream their experience on Instagram and TikTok.