This morning, Beyonce announced that her latest adidas x IVY PARK collection will drop on January 18, 2020. Since its 2016 launch, IVY PARK has been distributed at mass retailers, including Nordstrom, Topshop, Foot Locker, and Eastbay. Last year, the Parkwood Entertainment CEO bought the brand in full after her former business partner was accused of sexual harassment.

Today’s announcement was paired with an ELLE cover story:

“In 2016, when she first created IVY PARK—a brand she now owns outright, making her one of the youngest women, and the only African American woman, to exercise 100 percent ownership of an athleisure brand—she was aiming to dress real women who work out, dance, and navigate the school-run catwalk in athleisure.

And after finding out that men were also flocking to IVY PARK, she’s widened her audience even further with the announcement that the collection will feature gender-neutral styles going forward. Her new partnership with adidas has allowed her to add footwear to the line for the first time. For the launch, Beyoncé hand-selected her favorite footwear models and mixed them with the aesthetics of the season.”

IVY PARK’s extension to menswear is logical and inevitable. We’ve seen Lululemon, Forever 21, and countless other brands start with women as the core audience then expand. We’ve also seen women-focused athleisure brands like the Athleta (owned by Gap) stay focused on its core while the company launches a men’s specific brand, Hill City.

Beyonce’s decision to expand to gender-neutral products (and not launch a solo men’s brand) aligns with her artistry. “Why we stan”— a phrase commonly used in the Beyhive—is not gender-specific. The 38-year-old’s music connects with fans of all backgrounds. Lemonade may come from a woman’s perspective, but it’s not women-specific. At its core, IVY PARK is still artist merch, which is an extension of Beyhive fandom. Genderized products reinforce buckets and definitions, which has never been part of Beyonce’s brand. The neutral product line also aligns with Beyonce’s personal beliefs on LGBTQIA rights.

Here’s a quote from Queen Bey herself in the ELLE feature:

“I focused on designing a unisex collection of footwear and apparel because I saw so many men in IVY PARK. The way they have embraced the brand is an unexpected gift. I appreciate the beauty of gender-neutral clothing and breaking the so-called fashion rules.”

The athleisure market has a broad definition with various figures reporting it as large as $300 billion. But even the most conservative estimates are strong. Earlier this year, Vogue Business said it’s a $167 billion industry with no signs of slowing down: 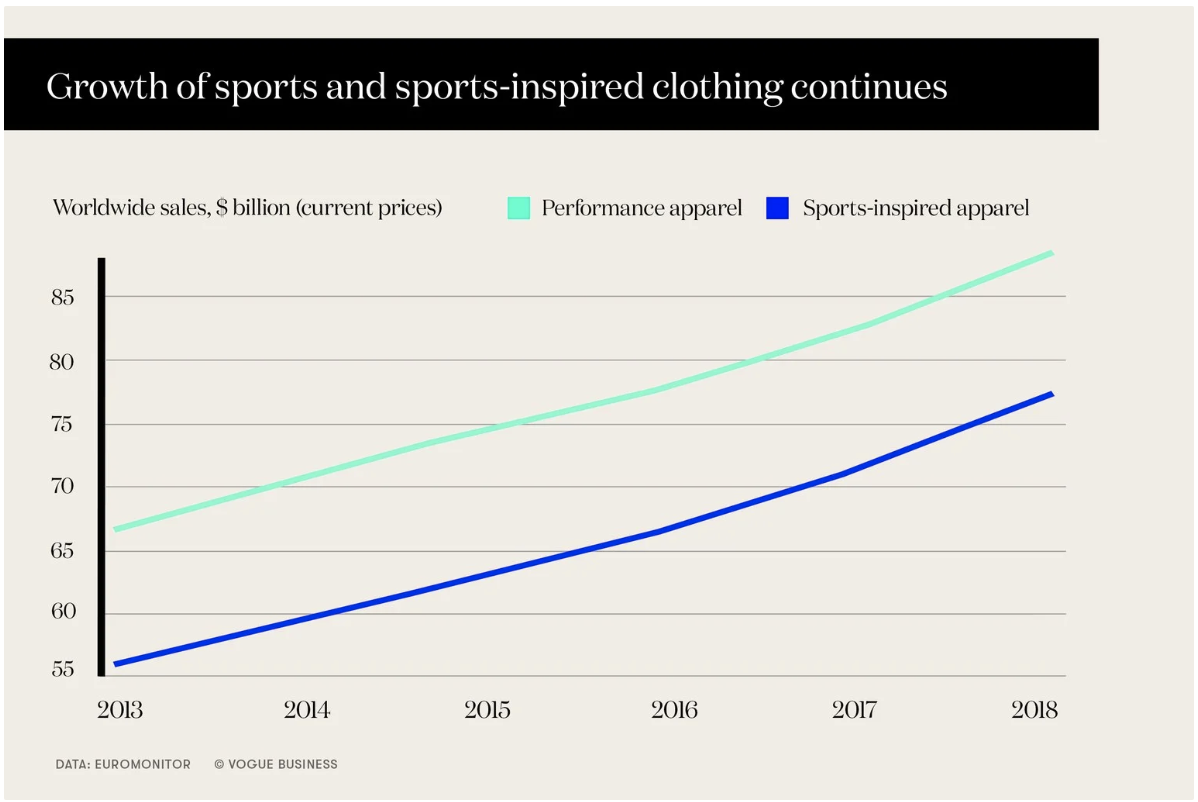 The ELLE feature was unlike most past Beyonce interviews. It was technically an “Ask Me Anything” with questions from fans. But it was more of a mailbag than a true AMA. When I hear AMA, I think of a rapper hopping on Reddit and sorting through the unfiltered madness, like this:

Beyonce’s brand is too contrived for the unpredictable wild, wild, west of a true AMA (that’s not meant to be a knock, and I get if it’s take that way, but it is what it is). But for the safety of the process, it was the right call. ELLE hid the names of the fans who asked questions, which was wise. In October, the Rihanna Navy bullied the journalist who admitted to not prepping for her Vogue interview. The Fenty Beauty founder had to come to the journalist’s defense. We all know that the Beyhive is equally toxic, which I spoke to Beyonce’s father Mathew Knowles about on the Trapital Podcast. It’s easy to imagine the problematic treatment of a fan who asks a question that the Beyhive dislikes.

It was still fun to see Beyonce answer questions that her day-ones appreciate, like her lifelong love for whales, quoting memorable Jay Z lyrics that reference her, and referencing the same memes that the common folk enjoy. If you’re a fan, check the interview out.

SoundCloud pulls a Netflix with recent changes in controversial week

It’s been quite the week for SoundCloud. On Monday, December 2, the digital streaming provider emailed all creators to announce an important change:

“Starting today, every SoundCloud creator will be able to upload, store and download their original lossless HD files. This feature set was previously only available to Pro Unlimited subscribers. You can learn why uploading lossless HD files is an important way for you to protect your work here.

To make lossless HD file management free to all, starting December 9th, our free upload limit will change from 3 hours of audio, to 3 hours or 15 tracks. This will not impact existing uploads. Learn how this change might affect you at our Help Center.”

Creators everywhere lost their shit. The average song length is ~3 minutes. The 15-track limit was hardly comparable to the three-hour block. Users would have had to pay $12-16/month to continue uploading tracks.

On Thursday, December 5, SoundCloud reverted its changes in a public blog post:

“Earlier this week, we announced our intention to change our upload limit. We’ve spent the last few days since the announcement listening to you, learning from what you’ve said, and reflecting about what makes SoundCloud special as an open platform that helps creators of all types express themselves.

And we heard you. We’ve decided not to roll out the change to our free upload limits and will continue to refine our balance of free and paid offerings to make the platform as creative and accessible as possible while building a sustainable business.”

The entire ordeal felt similar to Netflix’s controversial move in 2011 to separate its digital streaming and DVD rentals. The change was positioned as a way for Netflix to focus on the product of the future (streaming), and earn more revenue with Qwikster by harvesting the inevitable decline of DVD rentals. The decision was met with anger and uncertainty. Netflix lost 800,000 subscribers and the stock lost more than 75% of its value by the end of 2011.

Netflix reverted the change and soon regained trust with subscribers. But a few years later it eventually did the same exact split via DVD.com, its DVD rental service that still serves 2.7 million subscribers today.

Netflix’s misstep, similar to SoundCloud, was twofold. First, the change was communicated poorly. SoundCloud’s initial decision was publicized under the auspice of lossless HD audio. While that’s true, SoundCloud has actively pushed to monetize its userbase for more subscription revenue (instead of ad revenue). If you listened to my Trapital Podcast interview with SoundCloud President Mike Weissman on the company’s creator strategy, this should not be a surprise. Similarly, Netflix positioned its initial split by saying it’s, “becoming two quite different businesses, with very different cost structures.” That’s true, but CEO Reed Hastings could have saved more face by saying, “Streaming is the future. Most of you won’t watch DVDs in the near future. We have to prepare.”

Second, and related, both announcements came too soon. The perceived value of HD lossless sound is still a bit centric to audiophiles who are ahead of the curve. While it may be the future, its too soon for the average creator to justify the disruption without frustration. The same goes for video streaming in 2011. Netflix didn’t have any original series back then, and the streaming technology wasn’t ready. As I wrote about in the Jay Z Cell Phone Strategy article:

Products that are “ahead of their time” will always excite industry experts, stans, and early adopters. But timing is an important factor in product-market fit, and it can’t be overlooked.

Does this mean SoundCloud will bounce back as Netflix did? Time will tell. The damage only ensued for a few days, so there’s much less ground to recover from. Also, switching costs are much higher for SoundCloud’s B2B product than Netflix’s B2C product. Either way, it’s a valuable lesson regardless.

Chicago rapper Juice WRLD was pronounced dead yesterday at 21 years old. He was an immense talent with two albums and an international tour under his belt. The world was in front of him. He was part of the wave of teenage SoundCloud rappers who rose to fame on the platform. But drug use has sadly plagued several of these rising stars.

According to law enforcement, several members of Juice’s team aboard the flight — which landed around 1 AM Sunday — told them Juice had taken “several unknown pills” prior to the seizures which led to him getting rushed to a hospital.

Juice WRLD’s struggles with substance abuse have been well documented. He started drinking lean in sixth grade and later experimenting with Xanax and Percocet. He cited Future’s music as an influence for his early drug use.

One of my earliest Trapital articles, Future Needs Help Before Its Too Late, feared this exact scenario:

After rapper Lil’ Peep died of a drug overdose last year, a number of rappers vowed to quit Xanax and other substances they relied on.

But these vows are easier said than done. Juice WRLD vowed to quit codeine back in July. In a 2016 song, the late Mac Miller said he would never stop doing drugs because he enjoyed them. It’s hard not to also think about how Rick Ross, Lil’ Wayne, and others have survived multiple seizures caused by codeine.

It’s a sad story. I send my best wishes to Juice WRLD’s family, loved ones, and any of you in this Trapital membership who were friends with him or have worked with him in the past.