Maybach Music Group Didn’t Live Up to its Potential

Not too long ago, the Maybach Music Group was everywhere. Rick Ross’ record label reached heights that few groups had ever attained: Five #1 albums in three years. Seven albums in a fifteen month span. Meek Mill, Wale, and Rozay were running game. The iconic “m-m-m-m-maybach music” drop was inescapable. If we ranked the 2012 labels most likely to run rap for the rest of the decade, The Untouchable Maybach Music Empire was near the top. Higher than Dreamville. Much higher than Top Dawg Entertainment.

But it never happened. Not even close. MMG wasn’t a “bust,” but it didn’t live up to its #1 draft pick potential either. We expected Anthony Davis. What we got was Andrew Wiggins.

MMG had its challenges, but the empire should have better weathered the storm. That responsibility falls on the shoulders of the biggest boss that we’ve seen thus far.

The drama between MMG label-mates Wale and Meek Mill was unfortunate yet unsurprising. Here’s a brief timeline:

July 2014 – Meek called Wale a hater for not tweeting about his album. Wale responded on Instagram and said that he did support Meek but didn’t get a response. Ross claimed he called them both and it’s Gucci.

Oct 2015 – Wale said in Breakfast Club interview that Meek brought a pencil to a gunfight in his beef with Drake. Meek responded on Instagram, called Wale a jealous clown, said he’s not on MMG, and that he should jump off a roof. Wale replied with sarcastic subtweets to mock Meek’s disses. Ross, again, told us that Meek and Wale are brothers and that there’s nothing to see here.

Meek clearly hates when featured artists don’t tweet about his album. But if he and Wale were on good terms prior, it wouldn’t have escalated to Meek’s Twitter fingers.

“I first met Wale at King of Diamonds…Wale was a backpack rapper… So I was surprised to see him in a strip club, and I was even more surprised to hear his music booming in there… “No Hands” was a hit record but it wasn’t an accurate representation of Wale as an artist. Wale had depth. He could make the strip club anthem but he also made songs that resonated with women on a deeper level. He was the poster boys of the blogs but he also had the HBCUs and his hometown of Washington, DC, behind him. His music paid tribute to his Nigerian heritage and had elements of Go-Go and spoken word poetry.”

Wale checked all the boxes. He was an undervalued talent who got cut from his label after his debut album flopped. On paper, the “Nike Boots” rapper was the pickup that executives dreamed of. If there was Moneyball for hip-hop, 2010 Wale was the grand prize for the analytical A&Rs.

Rozay had a ton of respect for Wale, but their vibe paled in comparison to Ross’ first meeting with a 23-year-old Meek Mill at a Philly radio station a few months later:

Signing Wale was a decision that came from the mind, but signing Meek came from the heart. Meek and Rozay’s chemistry was stronger. Their tracks got more radio play. Their music hit different.

Ross could have focused more on Wale at the expense of Meek, but that would have been a mistake. MMG was built to play to its strengths. MMG’s distribution deals with major labels were designed to expedite releases. Self Made Vol. 1 was out before the ink dried on MMG’s 2011 deal with Warner. It was easier for Ross to operate with Meek at a fast clip since they were already in lockstep.

Wale’s objective value prop was clear, but Ross didn’t consider if he was willing to put in the effort needed to fully integrate a Seinfeld-loving backpack rapper in MMG’s Big Meech, Larry Hoover mafioso culture.

The Wale-Meek Mill situation played out like two middle managers lobbying for control at a growing startup. One manager attends wine tastings with the CEO and shamelessly posts pictures of the two of them on the company Slack like “yesterday was epic, loooove this company.” The other isn’t a culture fit, ain’t here for the politics, and wants the performance to speak for itself. Both managers can slight each other all day, but the underlying blame falls on your boy Yung Renzel.

The pros and cons of artist-friendly leadership

In Hurricanes, Ross mentioned a 2010 conversation with Lil’ Wayne that inspired his leadership style:

“The other thing I took away from that phone call was that Wayne wasn’t being supported by his people the way he deserved to be in his time of need. Considering how many records Wayne sold for Cash Money Records over the last decade I thought that was shameful. After the release of Teflon Don, I’d turned my attention to building out my label and that conversation was one of the things that got me thinking about the kind of executive I wanted to be.”

Rick Ross, unlike Cash Money CEO Birdman, is an artist-friendly executive. It’s similar to a founder-friendly venture capitalist. Founders know that the VC has their back. When things are good, they’re great. But those relationships make it difficult for the founder to lay down the hammer when needed. As a result, personnel issues last far too long.

In 2015, Ross explained why he refused to intervene in Meek and Wale’s beef:

“No, not at all. Cause it was unnecessary. It’s just like being a big brother. It’s just like every day in the studio with my homies. It’s always…that’s just the type of vibe we are, but that’s not personal. But most definitely, speak your mind and if you gotta get emotional to speak and make your point, you do that. Whatever it is. But this the squad. This the empire. It’ll never go no further than that. We’ll never shed no blood.”

Ross implied that intervention is only necessary if there’s a threat of bloodshed, but that’s ill-advised. This beef happened during an emotional crossroads for both rappers. Wale was frustrated with his career progress. He battled depression and substance abuse. Meek was in the thick of legal troubles and just got bodied by Drake. Nicki Minaj, Meek’s girlfriend at the time, stayed out of the Drake beef because of her allegiance to her Young Money running mate. The LAST thing either rapper needed was an internal beef.

Ross’ decision to ignore emotional jabs sounds like the guidance he likely received decades earlier as a correctional officer. In the mid-90s, William Roberts II was a CO in Dade County for 18 months. When conflicts between inmates arise, COs are taught to minimize the risk of injury, make inmates feel heard, but absolutely, positively, not pick sides. This is exactly how Ross addressed Meek and Wale! As the CEO and “big brother,” it was on Rozay to intervene. But there was no one else on MMG to check him and say, “fam, this is a record label, not a correctional facility.” 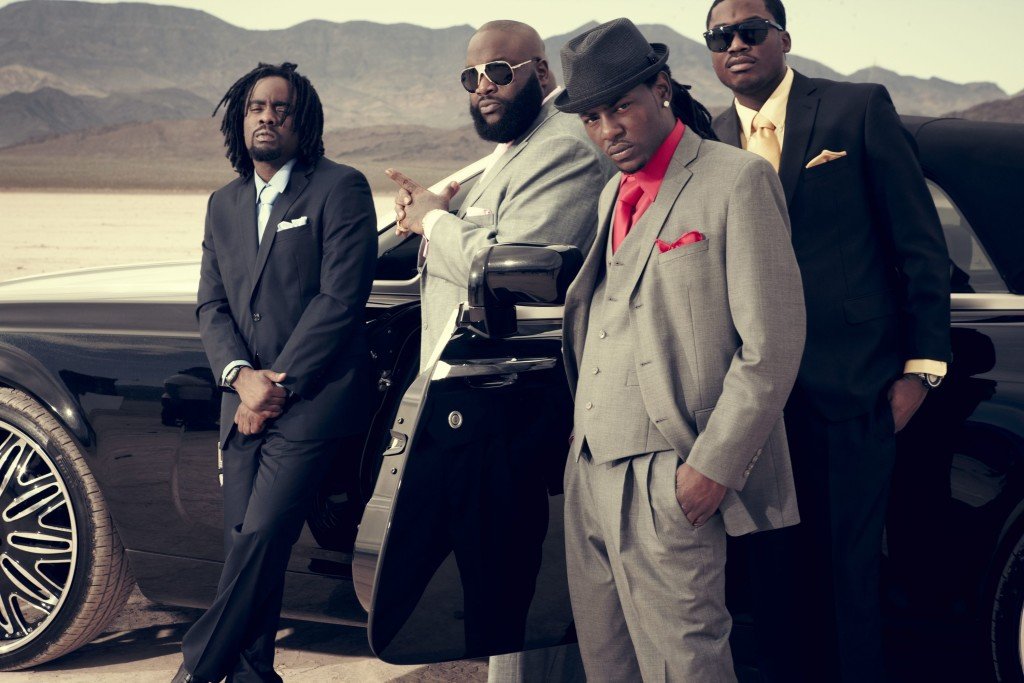 No one man should have all that power

In MMG’s prime, Ross was still signed to Def Jam and contractually obligated to release albums. He never hired someone like Ibrahim Hamad, the Dreamville CEO who runs point while J. Cole focuses on his music. There wasn’t a COO like Steve Pamon, who runs Parkwood Entertainment in tandem with Beyonce. Most successful labels have a non-artist in a critical leadership role. Instead, Rick Ross put the whole damn team on his back like Greg Jennings in Madden.

Ross also navigated his own legal issues and managed business ventures outside of music, like his WingStop franchises. It was all an impressive but unnecessary burden.

To cope with the stress, Ross took codeine. His drug use led to the seizures that have hospitalized him several times since 2011. He was forced to stop taking codeine, lose considerable weight, and take the medication previously prescribed.

It’s miraculous that MMG got as big as it did, but it shows how much more could have been achieved under a better structure.

In a 2017 Billboard interview, Ross was asked about his biggest mistakes as CEO of MMG:

“I mean, you know, just as a CEO and a boss, a lot of times you don’t follow budgets. You’ll just spend money based on your passion and your heart. A lot of times if it doesn’t work, it could be extremely faulty versus pacing yourself. You gotta pace yourself. You gotta make sure that the music connects as an artist instead of just going off the rip.”

Ross could have been referring to his failure to sign Wiz Khalifa in 2010, which came down to a lack of money to compete against the majors. He could be talking about the decision to sign Omarion (Maybach O) who came out hot with the 2014 hit “Post To Be,” but didn’t add long-term value.

It could also refer to his inability to help fund Meek Mill’s legal challenges during his time of need. Here’s what I wrote in July in a Member Update: Meek Mill’s New Label Says as Much About Jay Z as it Does Rick Ross:

The original Dream Chasers label didn’t break any artists. It’s easy to place blame on Meek’s legal issues and his untimely beef with Drake. But the real answer lies with Rick Ross. His laissez-faire leadership style didn’t help Meek meet his full potential and evade his personal struggles. When Meek and Wale—two MMG artists—had beef with one another, Ross stayed out of it. The Philadelphia rapper could have benefitted from stronger mentorship in those formative years. Dream Chasers was treated as an afterthought.

Money was a recurring theme for Ross, but he could have made even more money with a stronger foundation.

Hip-hop won’t forget the Rick Ross grunt. It definitely won’t forget “Dreams and Nightmares” either. But there’s a chance it might forget how powerful the Maybach Music Group was during that brief stretch.

And that’s a shame, cause it didn’t have to be like that.