Both 50 Cent and Lil’ Wayne’s mixtapes redefined the product, distribution, and marketing for mixtapes and got the entire industry to follow their lead.

Today is the tenth anniversary of No Ceilings, one of the mixtapes that defined Lil’ Wayne’s epic run in the 2000s. No Ceilings proved that Wayne could sustain excellence after Tha Carter III. That statement itself is a testament to the power that mixtapes had gained. Mixtapes were once raw compilations of freestyles curated by DJs. But by the time No Ceilings dropped, they wielded enough power to validate the “best rapper alive” at the peak of his powers.

Wayne’s mixtape run thrived on a foundation built by 50 Cent. In 2002, 50 Cent is the Future took the summer by storm. 50, DJ Whoo Kid, and their street team redefined the product, distribution, and marketing strategy for mixtapes and independent releases.

That evolution paved the way for today’s “mixtape,” which has now become a pointless delineation for marketing purposes. But this reality was inevitable. Successfully disruptive products, like 50 and Wayne’s mixtapes, caused competitors (old and new) to switch their style up. Now that everyone follows the same formula, the industry may be bound for disruption yet again.

It’s romantically fitting that 50 Cent catalyzed the modern mixtape. After getting shot nine times, the Queens rapper was willing to break any rules and do whatever it took to get put on.

Here’s an excerpt on his mixtape run from The FADER:

“Neither [Power of a Dollar or Guess Who’s Back?] hit like 50 Cent Is The Future. Recorded largely in Canada, because studio managers around New York found 50 a safety hazard, Future was the most nationally visible patient zero of “mixtapes” as we knew them in the 2000s: a sampling of original raps by a single act over a variety of mostly pilfered beats. It isn’t a series of scraps and exclusives put out under a DJ’s name, nor is it an album under novelty glasses and a fake mustache, as so many quote-unquote mixtapes are now.”

That’s three distinct changes that 50 Cent is the Future kicked off. First, it jacked well-known beats from Jay Z, Mobb Deep, Tweet, and countless other artists. When asked if 50 was nervous about this, his manager Sha Money XL reminded us what’s really good. “50’s first record that people knew him by was ‘How to Rob.’ He didn’t give a fuck about what a nigga thought so that wasn’t even a concern of ours.”

Second, he dropped album-quality bars on the mixtape. The standard M.O was to save the best stuff for the album. But mixtape became proving grounds for album placement. 50’s trio of mixtapes—Future, No Mercy No Fear, and God’s Plan— were minimum viable products that helped craft Get Rich or Die Tryin’. He got early feedback, caught the attention of Eminem’s manager Paul Rosenberg, who got 50 in front of the Shady/Aftermath squad. With a verified product and co-signs for Dr. Dre and Eminem, 50 had it in the bag.

Third, the mixtape came from a single act. Sure, there were guest verses by Lloyd Banks and Tony Yayo, but this was marketed as a 50 Cent project. It followed a transition that had already happened hip-hop. Back in the day, DJs were hip-hop’s main draw. They were the gatekeepers who controlled what was played at the clubs, knew the promoters, and had ties with the radio stations. The MCs were mere sidekicks. But that eventually changed as artists became the brands. It’s not a surprise that the same happened with mixtapes.

50’s distribution game was grassroots. Here’s DJ Whoo Kid on his role on the iconic mixtape in an interview with Mass Appeal:

“Like I said I’m the distributor. Instead of me, I created like bootlegs…anywhere that they sold drugs, like a corner, I would go to the bodega and be like “I’m gonna leave like 20 tapes here”. Cause’ the whole drug culture is connected with 50 Cent. They love his music. So I’m like “If these guys are coming here to buy drugs, buying weed, getting their nickel bags and shit, there’s a tape on the window right there. Hey and you get a tape too. I’ll get a bag of chips, a turkey sandwich, and a G-Unit tape.”

Before 50 Cent is the Future, there was no viable product between raw mixtapes and polished studio albums. EPs were shorter, but still a polished studio product. Mixtapes and albums were at opposite ends of the cost/quality spectrum. Future was the first move toward the market opportunity that existed.

Bringing the model to the South

In that same Mass Appeal interview, Whoo Kid spoke on the strategy implemented by DJ Drama, who teamed up with Lil’ Wayne:

“Drama was very smart cause’ Drama followed my formula of like, he actually moved to the south. He’s from Philly. So I ain’t moving down there, but he moved down there cause’, well I don’t know if he really did it for that, but if I were Drama, I’d be like “If Whoo Kid, Clue, all these guys are killing it here, who the fuck am I? Why would somebody stop and talk to me. I’m gonna go to the south, there’s a thousand motherfuckers” and he took a risk and went down there and it just happened. The south was next to take over this shit, they still are taking it over now. So he got in then with all those artists that’s popping right now.”

Note – if you have time, check this interview. As you can see from these last two excerpts. Whoo Kid is one of those “aye what had happened was…” storytellers you want to listen to.

Weezy was an ideal partner for Drama, whose Gangsta Grillz series had also put T.I. and Young Jeezy on the map. Up to that point, most of Wayne’s catalog had been produced with beats from Cash Money Records’ Mannie Fresh. Now, there’s nothing wrong with Mannie Fresh. He’s a good talent who’s made some memorable beats like “Back That Azz Up.” But he’s not the one to take an artist to that championship status. He’s like DeMar DeRozan with an 808 drum machine.

For Weezy to meet his full potential, he needed a boost. He expanded his producer collaborations on 2005’s Tha Carter II, which featured a wider range of beatmakers. But Drama let Wayne shine brighter by jacking the most popular Southern hip-hop beats at the time. The Dedication and Da Drought series were full of instrumentals from anthems that became more well-known for their Weezy F version than the original artist’s version.

Here’s a recording session for No Ceilings with Wayne’s version of “Wasted.”

While Whoo Kid aggressively pushed his product into a wide range of “retail” outlets, Drama had inbound demand from both retailers and distributors. Labels had started paying Drama to produce these mixtapes. Best Buy and Fye sold copies of Dedication 2. Even the bootleggers ate off Drama’s tapes.

Here’s a quote from Drama in 2016 on the tenth anniversary of Dedication 2:

“The lines were becoming skewed around those times. Unbeknownst outlets, they started bootlegging mixtapes. They were taking it to the next level: they were selling the shit in stores, putting barcodes on them. The shit got crazy.”

Drama’s right, ’cause shit did get crazy. Do you remember downloading songs illegally and getting nervous that the RIAA might show up at your house, take your computer, and try to sue your whole family? That’s what happened to Drama! He became so powerful that the Atlanta police raided his house. They seized over 80,000 mixtapes, took his equipment, and tried to hit him with that RICO. But Drama came out largely unscathed and eventually bounced back.

By the time The Carter III dropped, Wayne had a championship squad of producers (Kanye West, Bangladesh, Swizz Beatz, Cool & Dre). Thanks to his mixtapes, he had over two years of momentum built for this moment.

Remember, Tha Carter III dropped in June 2008. CD sales were in steep decline, digital music was still driven by piracy, and the music industry was beside itself. The future was uncertain, much like the rest of the U.S. economy during that financial crisis. Homes were foreclosed and investment banks went belly up. Applebee’s was out here selling two for $20 steak dinners to keep the lights on! Meanwhile, Dwayne Carter went platinum in his first week with over 1 million copies sold.

It was the highest first-week album sales since 2005. The last artist to do it before him? Fellow mixtape circuit king, 50 Cent.

Here’s a chart that shows the progression of mixtapes over time relevant to albums and customer needs. It follows the disruptive innovation model: 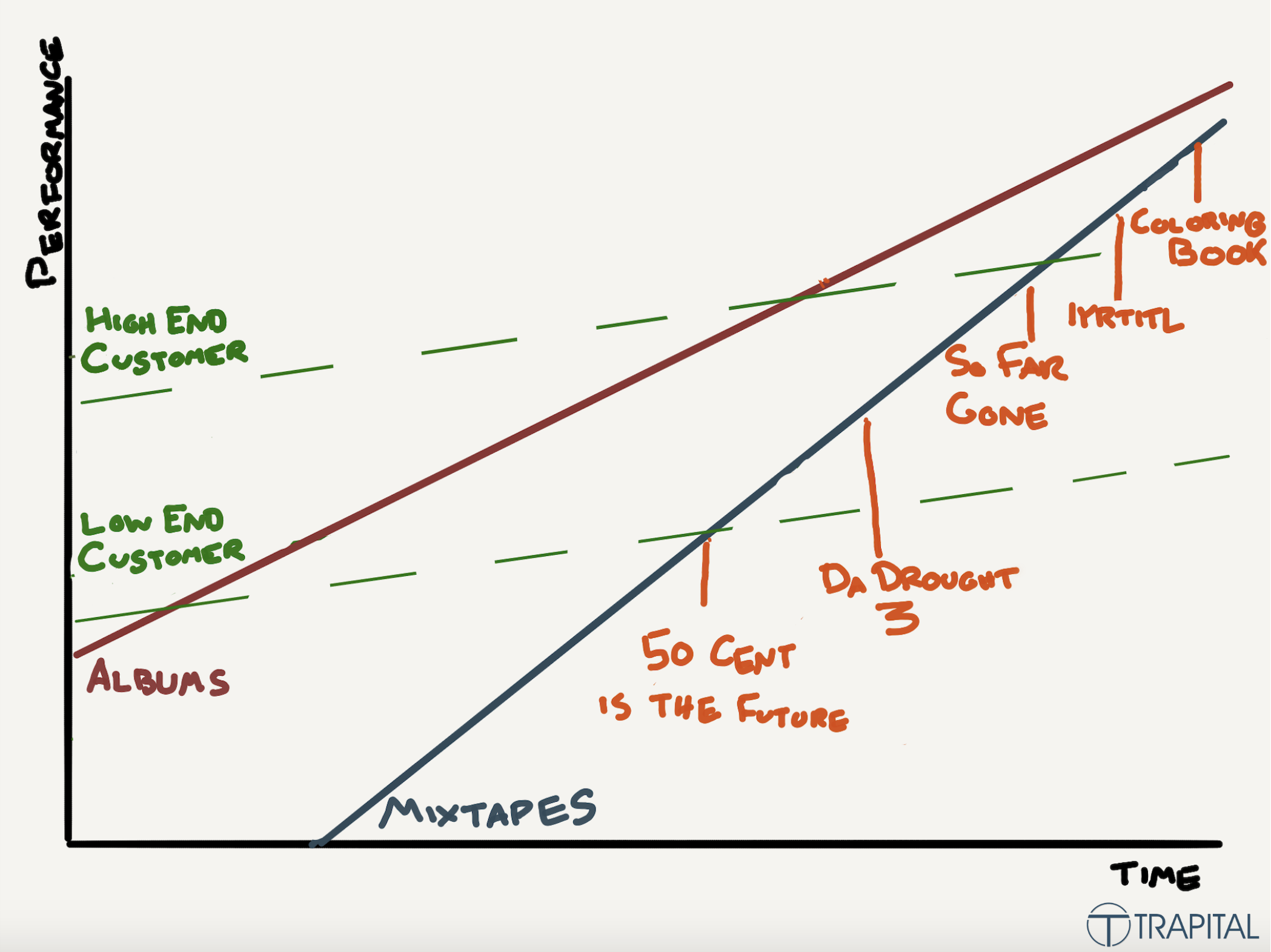 By 2009, sites like DatPiff had transformed mixtape distribution. These sites further skewed the mixtape/album distinction by replicating the digital download distribution model that existed on iTunes. Drake’s So Far Gone was a mix of jacked beats and newly-produced songs. It had enough prominent guest features to rival the hottest albums out.

It was harder than ever to understand the difference, but the icing on the cake was Drake’s If You’re Reading This It’s Too Late—a digital mixtape released directly on iTunes in 2015. It paved the way for Apple Music’s strategy, which led to Chance the Rapper’s Coloring Book “mixtape.” That “mixtape” won the Grammy Award for Best Rap Album had an exclusivity deal with Apple Music. I’m purposely using quotes because it’s a silly distinction, but a distinction nonetheless.

In hindsight, it’s clear to see how 50 Cent is the Future brought us to Coloring Book. 50’s model was built on the premise of bypassing the labels to generate his own buzz to get the attention of labels. And Chance used that same mentality to structure his business model outside of the major labels.

Since today’s mixtape/album distinction is pointless, it’s logical to ponder what’s next. Disruption theory would predict that modularized products will enter the landscape. These products would be inferior on attributes that matter to some fans, but superior on those that matter to others (just like 50 Cent is the Future was).

If you’re overly-generous to the current landscape, then you may consider the wave of loose singles and unfinished songs as an example of this. They are raw in form but make fans feel included in the process of artists becoming superstars.

But I’m not buying that. Loose singles are nothing new. Artists have dropped street singles in advance of albums for decades. And mixtape songs have been polished for future albums releases as well.

Where I am willing to go, though, is identifying the friction of what matters to consumers versus the artists and industry at large, and where it doesn’t line up:

The next big disruption in mixtapes will deliver a musical product that ignores the Billboard charts. It will also leverage brand partnerships, social media, and fame in a way that engages fans and is natural to how artists already promote themselves. With tools like TikTok, the potential is already there.

Get next week’s Trapital article in your inbox.