Hey! Two things before we get to today’s update:

Today’s update covers how Nas wants us to move on from his bankable classic ‘Illmatic,’ Ozuna’s wise move to team up with the Fast & Furious franchise, and how Shawn Carter Foundation’s upcoming gala is ‘partnership philanthropy’ at its glitziest.

Do you still big-up Illmatic? If so, Nas thinks you’re corny. From Nasty Nas himself (via a recent interview with Haute Living):

“I’m tired of celebrating it. I’m grateful, but it has started to take on a life of its own. I just did the 20th anniversary with the National Symphony Orchestra five years ago and, the next thing you know, five years go by and it’s a calendar that I didn’t ask for showing me how fast time moves.”

Twenty-five years is a lifetime. So I did another Symphony Orchestra show for Illmatic this year; I got another plaque for it. I’m very grateful—it’s so crazy—but to celebrate one album when I’ve made over 10, all the things I’ve worked on—and I’ve been working for so long—to celebrate one album over all else is corny to me. I don’t want to celebrate another Illmatic anything. I’m done. Ladies and gentlemen, thank you for appreciating that record, but it’s over.”

A few things to address:

A classic album is one of the most valued assets in hip-hop. They perform well on digital streaming providers. They also do well with physical and vinyl records sales as memorabilia. And they do extremely well on tour and live performances.

Of the top 20 highest-grossing tours of all time, only three of those tours are by artists who are still in their prime (Ed Sheeran, Bruno Mars, and Taylor Swift). Most of the other acts are legacy rock bands. As hip-hop continues its global expansion, and the folks who grew up with it have more discretionary income, the same will eventually happen. Jay Z’s already called himself Rap’s Grateful Dead, so we know he’s not stopping anytime soon–especially with the ten-year deal he re-upped with Live Nation in 2017.

This is a topic I’ve written about often. Here’s what I wrote in How Rappers Can Maximize Their Mixtape Anniversaries:

“So Far Gone’s anniversary rollout is a model for others to follow with their memorable mixtapes. The 32-year-old’s fans now want him to go on tour and exclusively play his old music. It’s a bankable opportunity that has helped other artists solidify their fanbase.”

The opportunity is there for many artists. Nas is clearly done with all that. He might be leaving money on the table, but he has enough business opportunities outside of Illmatic.

“As you know, we have often found great talent in the music industry to cross over into film. They are expected to leave all the accolades at the door to embrace the character with integrity… and that is exactly what Ozuna has done. Very proud of your work and role in Fast 9!”

The Fast & Furious franchise has been a friend to hip-hop for years. Ja Rule, Tyrese, Bow Wow and Ludacris have all blessed the silver screen for one of the highest-grossing film series of all time. And now it locked down one of the biggest Latin hip-hop artists in the world. I can’t vouch for Ozuna’s acting abilities, but from a marketability perspective, this is a smart, smart move for several reasons.

First, Latin hip-hop artists are some of the biggest music stars in the world. Ozuna was in four of the ten most-watched YouTube videos in 2018. No one else was on the list more than once. He’s a big star whose fans are used to seeing him in videos. That should translate to the big screen.

Second, the Fast & the Furious franchise is stronger outside the U.S. than most other franchises. Fate of the Furious made 81% of its revenue outside the U.S. Furious 7 made 77%. That’s higher than the Marvel movies, which are normally around 68%, and Star Wars at ~53%. It was due time to expand beyond American hip-hop artists and embrace the global culture. 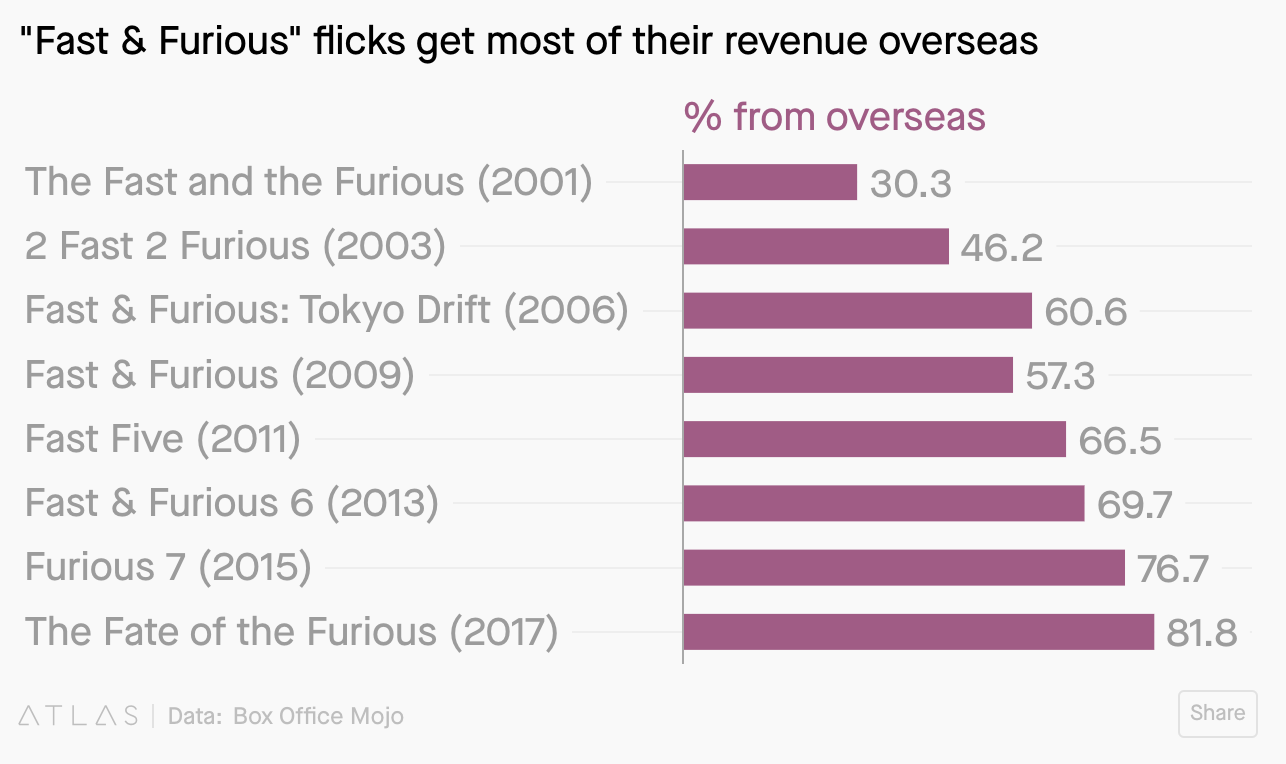 Here’s what The Guardian wrote in 2015 about the franchise’s attraction in Latin America:

“Latin America that increasingly looks like at the heart of the F&F family. Much has been made of the series’ equal-opportunities policy on race and, with Michelle Rodriguez a fixture of the series, plus plenty of Spanish-speaking settings, this has played well with American Hispanics: they made up 37% of the opening-weekend audience in North American (and 75% overall were non-white). But Furious 7 makes clear the kind of traction the series has built up in central and South America, too. Mexico ($20.8m) opened higher than the UK ($19m), and is still – at $39.7m cumulative – edging it as the second biggest market behind China.”

Third, which I only put down here not to sound too self-congratulatory, I literally wrote about Ozuna’s opportunities back in June in Why Latin Hip-Hop is Still Undervalued:

“From a sponsorship perspective, companies have probably lined up at the opportunity to have their products placed in music videos with the potential to get billions of views. I was surprised to find out that as of late September of last year, Ozuna didn’t have any major sponsorships! A few of his Instagram posts might have been sponsored, but that’s it. There’s a ton of opportunity to get paid in a way that’s true to the artist.”

Boom. And now he has a spot in a movie franchise that grosses over $1 billion. You love to see it.

From the Shawn Carter Foundation:

“The Shawn Carter Foundation will host The Shawn Carter Foundation Gala Weekend on November 15-16, 2019 at the Seminole Hard Rock Hotel and Casino in Hollywood, Florida. As the organization’s sole fundraiser of the year, this weekend will consist of a blackjack tournament experience, a black-tie gala, silent and live auction, a performance by 15X Grammy Award winning Icon- Alicia Keys, and other special events, all in the name of supporting deserving scholars.”

For those who don’t know, here’s a bit more context on the Shawn Carter Foundation:

“The mission of the Shawn Carter Foundation is to help individuals facing socio-economic hardships further their education at post secondary institutions.”

The gala is presented by Puma, where Jay Z serves as a creative director. It follows a trend I’ve recently written about, partnership philanthropy.

“When a big brand sells clothes and donates proceeds to foundations or charities, its a form of “partnership philanthropy.”

Let’s say that the only way for consumers to contribute to the Neighborhood Nip Foundation was to donate directly on the website. There’s a good number of people who will donate. And Neighborhood Nip would receive a majority of those donations after processing fees.

But for better or worse, more people like to show their activism. The vanity may irk some of you, but that’s the ethos of social media. A physical good that shows someone’s activism also creates social proofing, which drives more sales. While a higher proportion of the revenue goes towards covering the costs of good sold, the number of sales made and overall revenue may outpace standalone donations.”

That was in reference to Puma’s partnership with the Neighborhood Nip Foundation, but the same principle holds with galas. The Met Gala is attractive because the best photographers from Getty Images are hired to showcase celebrities, which drives earned media and exposure for those celebrities. It’s a net-positive game that ultimately drives more philanthropic giving for the foundation. The Shawn Carter Fpundation gala will have photos of Meek Mill at a blackjack table, Beyonce and Rihanna in attendance, and Alicia Keys performing. That will increase the likelihood of guests willing to pay $40,000 to go to a good cause, but it may also get them a valuable photo op with one of hip-hop’s biggest stars.

It will also improve goodwill for Jay Z, whose public image has taken a slight hit in recent months. His partnership with the NFL and statements on Colin Kaepernick (“we’re past kneeling”) angered some of his base. His follow-up statements weren’t much better. This event may serve as a healthy reminder that Jay Z still cares. Some may argue he’s proven enough to weather some backlash here and there. But Jay’s future opportunities rely heavily on his image. The more intact that is, the better off he is.

Remember – reply to this email if you can come through to the Trapital Happy Hour in Manhattan next Tuesday at 6pm!