Hey. As you may know, Jay Frank, SVP Global Streaming Marketing at Universal Music Group, passed away yesterday at the age of 47 after a battle with cancer. We never met in person, but we made a connection since I launched Trapital. He was one of the first folks to buy an annual Trapital membership. He occasionally sent over confidential details with backstories on topics I’ve written about, kept me honest if he didn’t agree with a take, and provided words of encouragement as Trapital expanded. I know he’s made an even deeper impact on several of you. My condolences go out to his family and loved ones.

Last weekend’s brunch at A3C in Atlanta was a great time. Here’s a photo of the group: 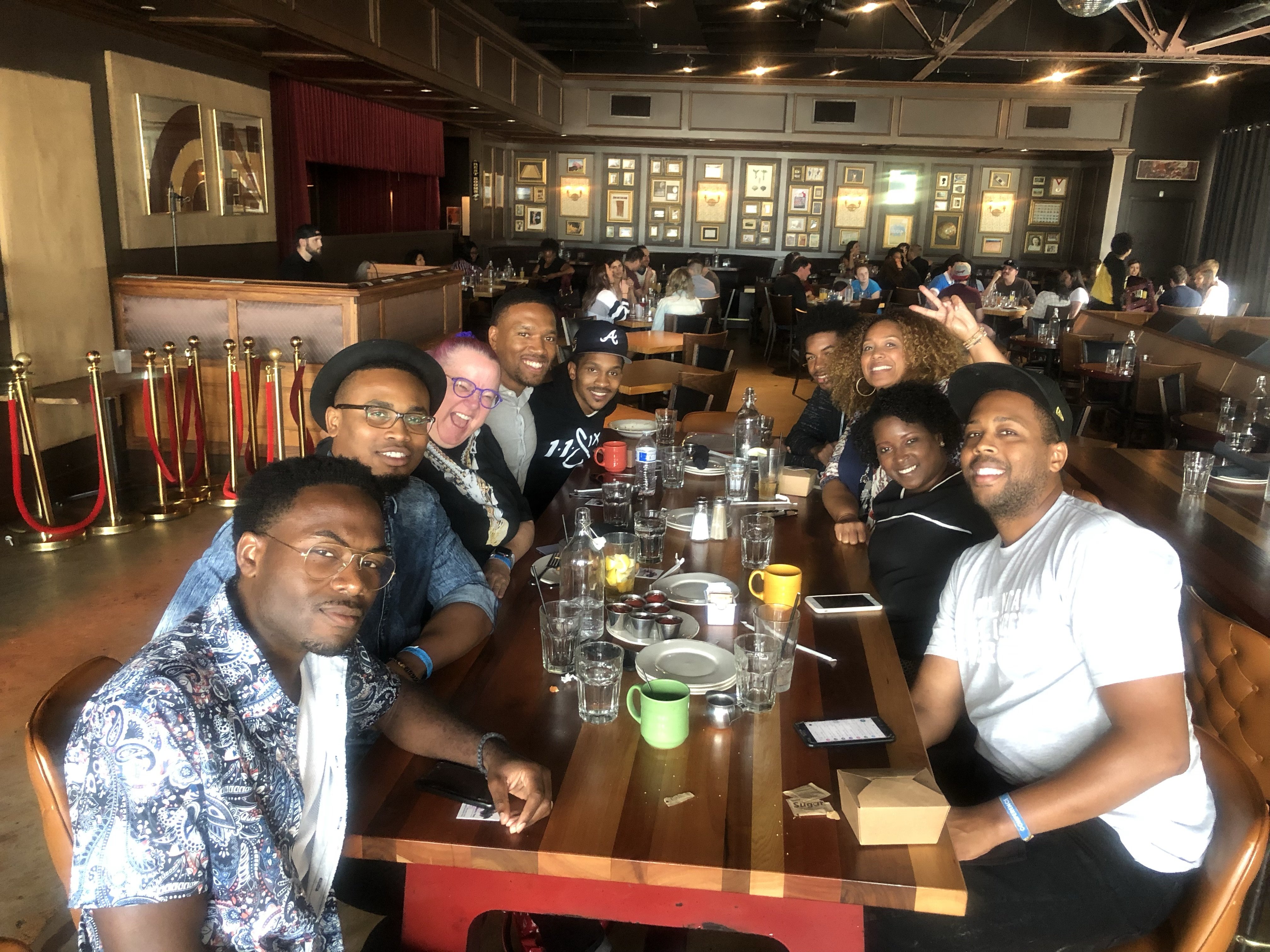 I have a bit more travel coming up, so I’ll keep y’all posted on future dates and locations for meetups!

Today’s update covers the business model of T.I. Trap Museum, the end-of-the-decade listicles, and Rolling Loud’s removal of five artists from this past weekend’s lineup.

On Saturday, I stopped by T.I.’s Trap Music Museum in Atlanta, Georgia. I did little research and had zero expectations before pulling up. At $10 admission, it was a fairly affordable experience to break up my afternoon of A3C conference programming and meetings. At least 150 people were waiting in line to get in. Instead of waiting, I paid an extra $10 to cut the line and enter immediately. After a few minutes inside, it clicked. This is not a traditional “museum.” This is an “experium”—a venue built for the social media aesthetic.

These museums are nothing new. The Museum of Ice Cream inspired a wave of copycats that are light on content and heavy on vivid imagery. At the Trap Museum, fans can take a seat on top of 2Chainz’s original pink car that was at his iconic pink trap house. They can pose next to a Jeezy-inspired snowman, take pictures with Gucci Mane’s bricks, T.I.’s gun collection, and more.

Once inside, fans can purchase drinks, participate in an “escape room” challenge to escape the trap house for $20 more. There’s truly a little something for everyone.

Here’s a short video that captures the experience:

I decided to do a little research. The museum attracts 6,000 guests each weekend. At $10 each, that’s $60,000 revenue per weekend and over $3 million annually. If we assume that at least 10% participate in the escape room for $20 more, 10% pay $10 more to cut the line, and 20% buy a $10 drink, the annual revenue approaches $5 million. Not bad for an attraction in Bankhead—a part of Atlanta that rarely gets this type of business activity.

In July, T.I. did a Lil’ Trap House Exhibition pop-up exhibit in Los Angeles to pay homage to the late Nipsey Hussle. My $5 million annual revenue number is likely a conservative estimate.

T.I. has expeditiously cemented himself in a space that investors care about. The Museum of Ice Cream’s parent company, Figure 8, was recently valued at a whopping $200 million and raised $40 million in funding. But other companies that followed Figure 8’s footsteps have fallen flat. Here’s a recent segment from Vice News:

The Trap Music Museum is far cheaper than most other “experiums”, but that low-cost model is what may preserve its appeal, accessibility, and longevity.

Listicle SZN is Upon Us

It’s that time of year. As the decade concludes, the lists and rankings have poured in. Pitchfork’s 200 best albums and songs of the 2010s was a popular internet topic. Most music publications will likely have their versions out by the end of December.

But that’s just the surface. Listicle SZN also includes the never-ending Top 50 rappers lists. It’s also the includes the ludicrous questions posed by XXL Magazine on whether Power is a better TV show than The Wire (the tweet has since been deleted). Listicles, and similarly-inspired content, have always been clickbait material. But those lists now include more and more controversial selections to intentionally amplify the discussion. Unfortunately, a list of expected answers draws minimal fanfare.

As you may have seen, I participated in BBC Music’s poll for the greatest hip-hop songs of all-time. The Notorious B.I.G.’s “Juicy” claimed the top spot. Despite the 108 participants—many with large followings, like Common—there was little discussion about the list we all contributed to.

There are two reasons why. First, it’s hard to debate the legacy of “Juicy”. It’s a deserving song, but not a sexy pick. None of the top 25 songs were sexy picks. It was the equivalent of a chalked NCAA bracket where all the #1 seeds make the Final Four. When a group of esteemed journalists makes lists like this, it’s driven by ol’ heads who swear by New York and Los Angeles hip-hop. It excludes the younger audience, which is the second reason why there was little discussion. These lists need to include newer songs to draw in younger readers. Whether those newer songs deserve placement is a separate discussion. With listicles, views matters more than perceived accuracy.

The same thing happens with movies. There are tons of lists that rank 1941’s Citizen Kane as the greatest movie ever. Those lists will please cinephiles like Martin Scorsese. But they often fall on deaf ears, especially with younger audiences.

The lists that get discussed follow a distinct formula:

Most content creators with ad-based business models understand this. Folks react to outrage, like Joe Budden listed as the third-best rapper of all-time. The creator of that list put Budden there to drive discussion on the Joe Budden podcast. It exceeded expectations.

Even Pitchfork—despite its intellectual positioning in music commentary—made selections designed to trigger a response. Azealia Bank’s 2011 viral hit “212” was #6 on its Top 200 songs of the decade. 212 still slaps, but #6 tho?! That selection was made with the guise of sparking a broader discussion about Banks’ musical talents and her ever-problematic statements.

For better or worse, listicles ain’t going nowhere. Our brains are programmed to remember numbers and rankings. They are digestible. Listicles are now commonplace in educational pedagogy, so the next generation will live by them too. I’m obviously not immune to them (e.g. Top Five Trapital articles of 2018). And in full transparency, I plan to do one before the year wraps up! But in stark contrast to most of those lists, my subscription-based business model doesn’t force me to follow the clickbait formula I laid out above.

In other words, you won’t see me rank Soulja Boy as the 2nd best hip-hop businessperson of the decade just to watch the melee ensue on Twitter. But whichever outlet chooses to do so will likely be rewarded for it.

“Five rappers with New York roots were removed from the local edition of the traveling hip-hop festival Rolling Loud, scheduled for this weekend in Queens, at the behest of the New York Police Department, representatives for the concert said on Saturday.

Rolling Loud’s planning – this is RL’s first festival in New York, which is a bit of a surprise given the wide range of markets its hit up. But most Rolling Loud concerts have a myriad of issues. Logistical nightmares, safety, scheduling, and sound issues have all plagued the five-year-old festival. The organizers treat the festival like a startup designed to fail fast and improve upon its mistakes. But music festivals are not a consumer tech app. There are real-life consequences with failing fast, especially with a poorly-run event that attracts tens of thousands of attendees multiple times a year.

Rolling Loud received this letter from the NYPD: 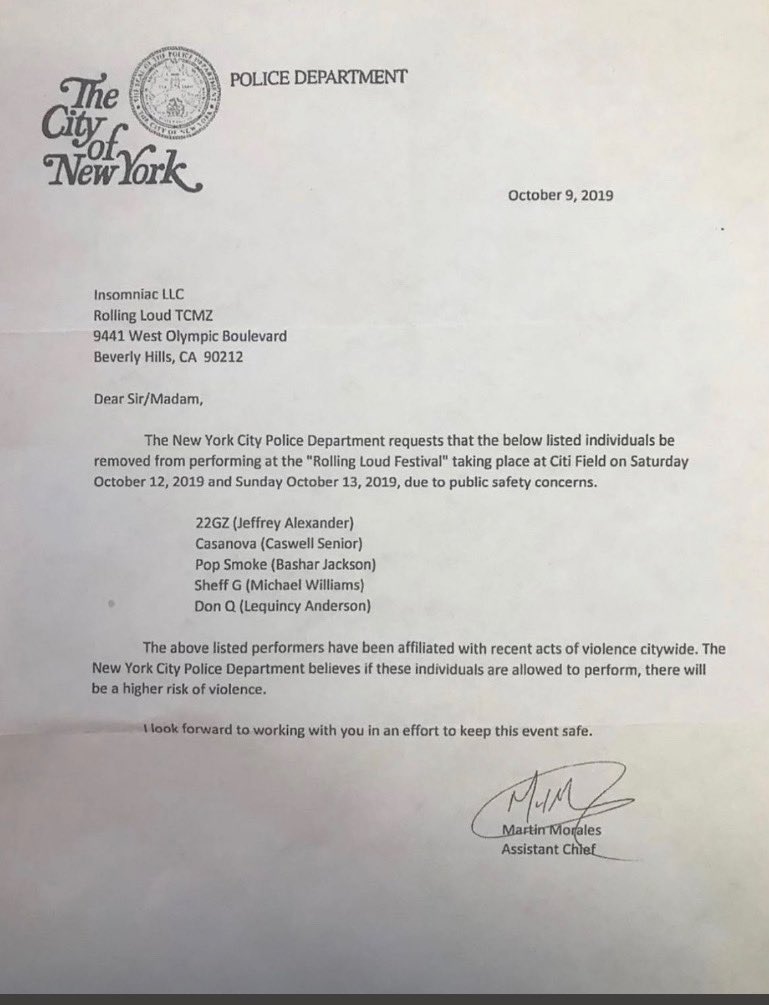 Before the lineup was finalized, Rolling Loud could have vetted its lineup with local officials to ensure that this wouldn’t be a problem that arose at the 11th hour. This was an avoidable issue.

Double standards with hip-hop concerts – I’ve written often about the double standards in policing at hip-hop concerts. This has existed for hip-hop since the Run DMC days. Each of the artists removed from Rolling Loud either had past felony charges or gang ties that made the police nervous. This morning on the Breakfast Club, DJ Envy brought up a very good point. Past felony charges and gang ties never stopped Snoop Dogg from performing at these types of events.

Two weeks ago, Snoop Dogg brought out strippers out to perform at the University of Kansas basketball kick-off event. “And when you pay for Snoop Dogg, you gon’ get Snoop Dogg,” the 47-year-old rapper said in response to the backlash. “The audience enjoyed that shit. I don’t know what the fuck they talking about.”

Casanova and the other removed rappers still got paid, which is good. But the media attention may not bode well for their future bookings. He doesn’t have the Snoop Dogg brand to counteract his legal past. But Rolling Loud—and festivals like it—can do a better job to prevent this from happening in the first place.

P.S. Tomorrow’s the last day to get your Trapitalist-only gear! The store will be opened up to everyone else (without the Trapitalist tee and sweatshirt) later this week. Get it here: shop.trapital.co