Hey! I dropped a new podcast today with James Supreme, A&R at Universal Music Publishing Group. We went deep on his role behind Lil’ Nas X’s “Panini”, being a part of Lil’ Dicky and G-Eazy’s management teams, and the importance of mental health in hip-hop. It’s one of my favorites so far. Go listen!

I’m also excited for tomorrow’s Trapital Brunch in Atlanta! Friendly reminder that the Trapital store is open. Go get your merch.

British rapper Stormzy has graced the cover of TIME. You don’t hate to see it, you love to see it. The 26-year-old has joined Adele, Radiohead, and Coldplay as one of the few British acts who have headlined Glastonbury—one of the largest music festivals in the world.

In the TIME feature, the grime rapper shed light on his goals and positioning:

“In the past two years, alongside his work in music, he has launched Merky Books, a publishing imprint with Penguin Random House U.K., as well as partnering with Cambridge University to launch the Stormzy Scholarship, funding the tuition fees and living costs of two black students during their degree studies. “There’s a whole side of blackness and black Britishness that doesn’t often fall under the kind of umbrella term that everyone uses of ‘black culture,’” he says. “It’s like black culture almost becomes music, acting, sports and just kind of celebrity and whatever. I was like, Yo, there’s theater, there’s literature, books, there’s ballet.”

He’s not lying. In most discussions, ‘Black culture’ seldom encompasses culture outside of celebrities. In 2018, Broadway earned over $1.8 billion. It’s an impressive, record number, but it was still a smaller number than last year’s highest-grossing movie, Avengers: Infinity War ($2 billion). Broadway’s largest recent celebrity, Lin-Manuel Miranda, has shifted to the big screen himself. Those industry comparisons are even lower for literature and fine arts like ballet, symphony.

By definition, Stormzy is differentiated as a British rapper with a global footprint. Not since Tinie Tempah’s brief moment eight years ago has a UK rapper risen to the mainstream. But unlike Stormzy, Tinie catered heavily to the American hip-hop game (to his disadvantage). The “Written in the Stars” rapper went headfirst into the dubstep-inspired hip-hop wave that took over 2011-2013. He had a few hits, but songs like his mega-collab with Swedish House Mafia quickly commoditized his product. Tinie went from a breath of fresh air to another rapper waiting for the next Skrillex remix.

Stormzy has doubled down on the overlooked aspects of culture. The co-winners of the #Merky Books New Writer’s prize have already received publishing contracts and agency representation. Since launching the Stormzy Scholarship, BBC reports that the percentage of black students admitted to Cambridge University has increased by nearly 50% from 61 to 91 students. Still small numbers overall, but it’s progress that wasn’t there before. He’s gotta feel good about the direction.

Speaking of overlooked British culture, we gotta mention Netflix’s Top Boy. The British crime drama has stayed true to itself without acquiescing to the American crime drama formula. The slang terms are native and the content is relatable. The show has crossed a threshold of awareness and interest in America too.

But Netflix hasn’t shared viewership data, which it rarely does, but still. The cynic in me expects that Top Boy will last one more season at most. A few days ago, Business Insider analyzed Netflix’s programming and reported that most Netflix series get dropped after two seasons—if that. Cult favorites like American Vandal (which I loved) couldn’t cross that threshold. While Top Boy is popular, I doubt it drew in enough viewers to pass that threshold. Even Drake’s backing can’t outmatch the algorithmic, customer acquisition-focused machine behind Netflix’s content strategy.

But don’t lose hope! Just as Top Boy found a new home on Netflix, another suitor could pick it up after. There are fifty ‘leven streaming services heading our way, and they all want original programming.

“Fun fact: Queens rapper Lil Tecca was not only the first artist of our fourth installment of “First on SoundCloud,” but after 86 days in the #1 spot, his track “Ransom” also recently broke the record for most consecutive days topping our US charts.

To acknowledge this massive feat, we decided to surprise Lil Tecca at his label’s offices yesterday with our first-ever Chart-Topper Award AKA some custom kicks. The personalized Air Force 1s were presented by SVP & Global Head of Music, Artist Relations, Label Services, Lisa Ellis at SoundCloud, alongside Monte Lipman, CEO of Republic Records, Avery Lipman, President and COO of Republic records and the Republic Records staff.”

They hooked my guy up with custom kicks too! 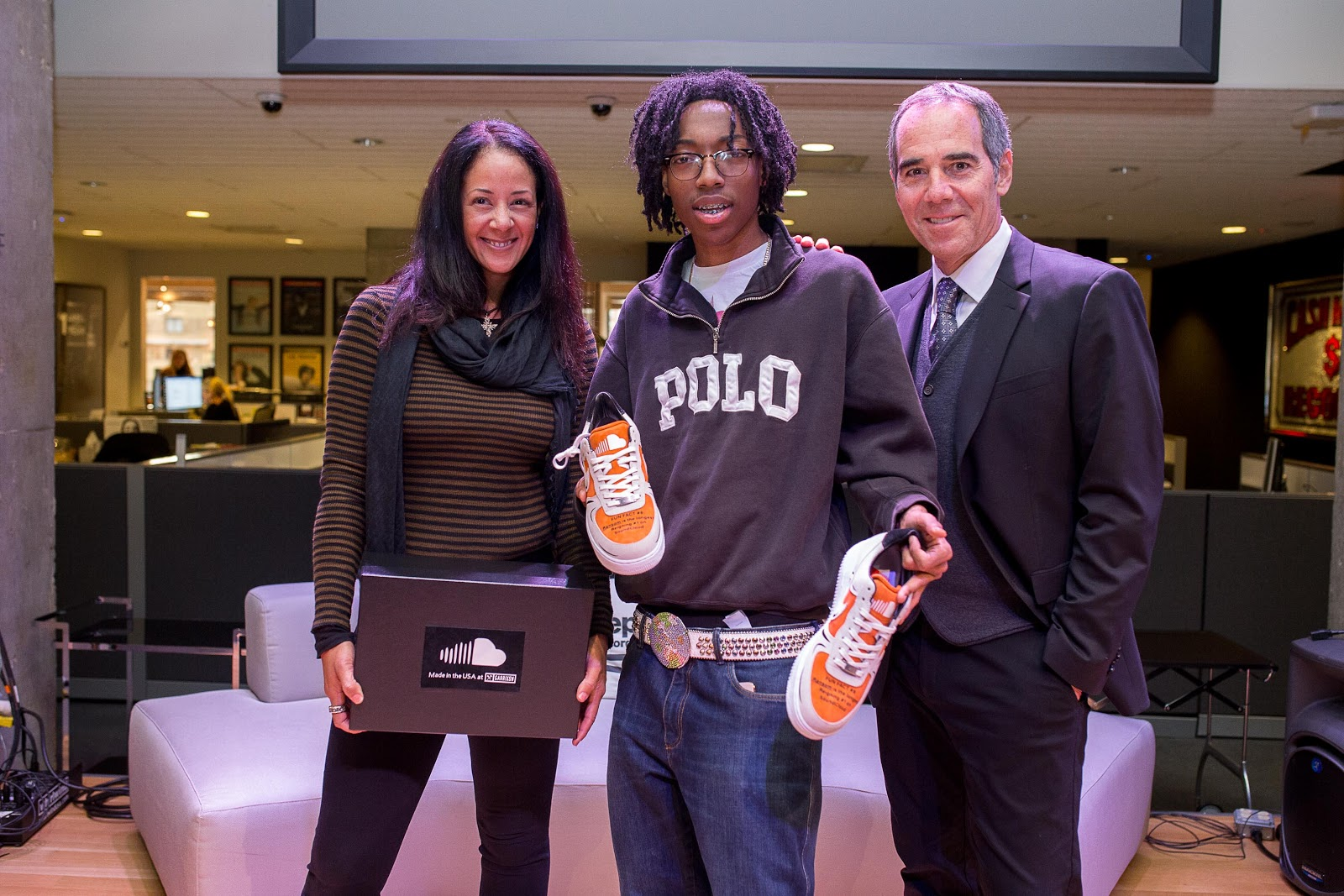 The 17-year-old’s rise to fame has been fast. He got discovered on Twitter by an LA-based music collective, made his way to LA and recorded a bunch of tracks including “Ransom.” The hit single has attained success on several fronts—its #4 on the Billboard Hot 100, 350 million Spotify streams, and nearly 150 million on YouTube. But SoundCloud was the engine behind its rise.

I’m often asked “which DSP should artists focus on?” or “which social media platform is the most important?” Folks want the magic bullet, one-size-fits-all answer. But truthfully, it all depends. There are so many outlets that artists have broken out on SoundCloud, Twitch, Fortnite, Instagram, TikTok, Triller, and on, and on, and on. Artists need to match that with their focus.

Each of those platforms tailors to a different audience. When the target customer is well-defined—which I write about quite often in Trapital—it’s much easier for the artist to understand where energy should be focused and which services best help them. Lil’ Tecca, much like Lil’ Uzi Vert and Chance the Rapper before him, made their name on SoundCloud first. It proves yet again, that artists don’t need to make it on the biggest platform available to breakout. Success on a smaller platform is often preferred.

The primary support and backing received by a devoted music distributor, DSP, or social media platform can outweigh an otherwise large name elsewhere. As I wrote in the 50 Cent article, a show like Power gets an extra boost when it’s the flagship program on a network like STARZ. Would Power be as successful if it fought for popularity in the HBO or Netflix stable? No way. (But XXL had the nerve to tweet out earlier “Power or The Wire? You can only choose one.” So who knows what y’all think!)

With that said, artists still need to spread their reach. Social media platforms and DSPs can change their algorithms at any moment, which can disrupt an artist’s strategy. An artist needs to maintain a presence on other platforms. Gary Vee has coined this as the 79/21 rule. Now, I can only take Gary Vee in small doses, but gotta give credit where it’s due. He’s spot on here:

Right now, my 79-80% is spent on Instagram because it’s the most popular. I’m going the hardest on it.

And I spend 20-21% of my time on platforms like LinkedIn, Snapchat, Tik Tok, YouTube, and other stuff. Within that 20%, there are some platforms that get higher priority – LinkedIn is something I’m very, very bullish on right now so I’m spending a lot of time on it. Tik Tok is something I’m really excited about too.

The “79 / 21” rule is about diversifying attention. It’s not just about social media.

“Over the past week — since the release of his ASTROWORLD follow-up single “Highest In The Room” — Travis Scott has been strategically dropping new items of merchandise tied into the release, including hoodies, tees, hats, 12” picture discs, 7” vinyl, cassettes, CDs, and some honestly bonkers posters featuring spooky-looking aliens. While each item was initially only available for 12 hours, Scott has now made the entire collection available for 24-hours. Many of the items are bundled with digital singles, a tactic that has the potential to inflate “Highest In The Room”’s chart performance.”

Travis Scott’s merch game has always been on point. It’s one of the main reasons ASTROWORLD far exceeds its sales expectations. His 24-hour releases have been core to his rollouts.

It’s rarer to see this strategy executed for a single song. It might seem aggressive, but Billboard’s rules encourage this dynamic. The artists who care most about charting have released loose singles well in advance. When the album eventually drops, these loose singles get thrown on the album where they count toward the album’s sales. Drake, Post Malone, and many others have been rewarded for this too. If Travis drops his next album in 2020 (or 2021), “Highest In The Room” will be on it.

Often, an artist’s merch is heavily-inspired by one of two notable songs from an album. There are a few songs that came out before the album bundles wave that would have surely benefitted from this:

Crazy to think about, right? I expect Travis Scott will likely drop at least another loose single (if not more) before he announces his next album. And best of luck to whoever plans to drop their album the same week as Travis. The competition has begun.