Tony will oversee all editorial direction at TIDAL, including leading a team of editors and programmers in multi-genre global playlist curation, as well as the digital magazine, READ… Tony is the former editor-in-chief of Billboard and Slam Magazines, his writing has been featured in the New York Times, Rolling Stone and Business Week…

Elliott will oversee the creation of new and existing original content. As a respected journalist, host of several TIDAL original content series’ and curator of some of the platform’s most popular playlists, Elliott is poised to guide TIDAL’s culture-shifting content team into the next era… Elliott is the former editor-in-chief of XXL and has helped define culture at music institutions such as Rap Radar and ego trip.”

These promotions tell us a lot about Tidal’s future plans. It formalizes a role that Elliott Wilson seemingly had by default. Wilson was involved with Rap Radar, #CRWN, Car Test, and he’s the chief curator of Tidal’s Thoro Hip-Hop Playlist. You know how Stephen A. Smith is literally on so many ESPN show and you’re like, “Damn, does he take a break?” That’s been Wilson for Tidal.

Chief content officers have risen in popularity at both media and non-media companies (that distinction is more blurred than ever, but that’s a topic for another day). CCOs typically oversee multimedia and digital content to ensure alignment with the company’s goals. Consumers are smart and receive more targeted advertising and programming than ever. Companies needed to up their game to improve messaging and communication.

Russell Reynolds Associates made this chart about the CCO role in different companies: 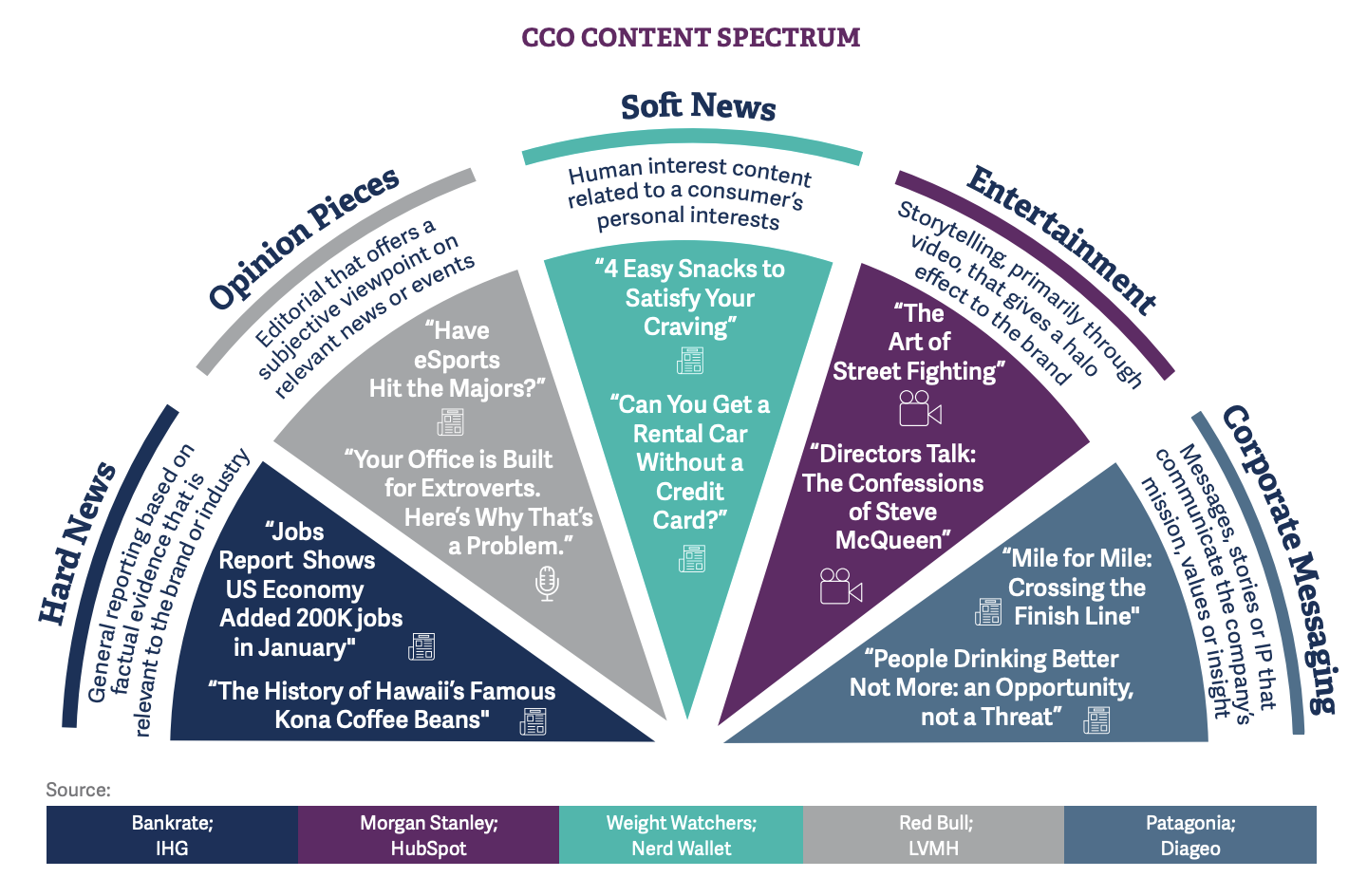 Tidal’s content is opinion, soft news, and entertainment. It’s strategy is twofold. First, it needs to attract new users to its streaming service, just like how Airbnb’s content strengthens its customer base’s likelihood to book with Airbnb in the future. Much of the content Wilson creates is available both inside and outside the platform. Second—and unlike Airbnb— the content itself is the product, which heightens its role in customer acquisition and retention. Tidal, like Spotify, has a much higher profit margins on its own original content. The stronger that is, the better.

That’s a fairly large purview for one person. As editor-in-chief, Gervino will share the burden and lead efforts to support new user attraction with the digital magazine, READ, which is largely a hip-hop publication. Tidal wants to double-down on hip-hop culture as its differentiator from the other digital streaming providers. It’s a tougher lane to own when hip-hop is the most-streamed genre of music and each DSP invests heavily in hip-hop playlists.

The distinction and split in power between Wilson and Gervino should help Tidal hone its voice to attract more of its target consumer, which I’ve written about here in Trapital. But hopefully Wilson catches a few breaks along the journey (unlike Stephen A).

Ironically, Wilson and Rap Radar co-host Brian “B.Dot” Miller interviewed Stephen A. recently. I haven’t watched it yet, but here’s the link.

“DaBaby scores his first No. 1 album on the Billboard 200 chart as Kirk opens in the top slot.

The set, which is the hip-hop artist’s second studio effort, starts with 145,000 equivalent album units earned in the U.S. in the week ending Oct. 3, according to Nielsen Music. Of that sum, just 8,000 were in album sales, as the set was powered largely by streaming activity. Kirk was released on Sept. 27 via SouthCoast/Interscope Records.”

According to Billboard, the 13-track album got 181.7 million audio streams. It’s the fifth-highest debut streaming week for a 2019 album. That’s no slight. DaBaby’s merch bundles weren’t anything crazy, just a few t-shirts and hoodies that accounted for merely 6% of units sold. It’s even more impressive since its DaBaby’s third project in twelve months!

(In comparison, Juice WRLD’s Death Race for Love sold 165,000 units its first week, but 26% of those came from album sales that were largely driven by bundles.)

DaBaby’s rise is a microcosm of 2019. His numerous altercations—some comical, some fatal—felt straight out of the “The Pump Plan” playbook. His clout begat his fame, which begat a hip-hop career that now has everyone’s attention. Here’s an excerpt from a recent profile in the New York Times:

‘Distractions designed to go viral were part of [DaBaby’s] early blueprint, like the time he walked around the South by Southwest festival in Austin wearing only an adult diaper and jewelry.

For a time, “My internet presence was definitely bigger than the music,” DaBaby said. “I’m so good at marketing, so once I knew I had them looking, I turned up with the music. I knew what I was doing — it was premeditated.”’

He now charges at least six figures per guest feature. He has the stats to back up that claim too. The highest-charting singles on Megan Thee Stallion and Chance the Rapper’s newest albums both feature the rising Charlotte rapper.

Part of DaBaby’s attraction is the lane he’s carved out. Despite all his antics, the 27-year-old demonstrated his talent as a rapper’s rapper. Rappers who actually spit bars have fallen to the wayside in the mainstream. Hip-hop is as cyclical as any other genre, and DaBaby’s fast-paced flow sets him apart in the southern-hip-hop market. Twenty years ago, rappers like DaBaby were a dime a dozen. He could have easily been a No Limit solider jumpin’ on gold tanks or a Hot Boy standing alongside Weezy F. Baby. But he’s a rarer find in today’s game.

Has RAPPIN’ rappin’ become a blue ocean strategy in modern hip-hop? I won’t go that far. It’s not unexplored by any means. But DaBaby does get to set some parameters in today’s game. His high demand lets him name his price, knowing that other rappers will pay for the unique value-add.

Speaking of Post Malone, the artist’s upcoming concert is heading to an Oculus VR headset near you. From Variety:

“Rapper Post Malone will stream an upcoming gig of his “Runaway” tour in virtual reality: Post Malone’s Raleigh, NC concert will be broadcast live to users of Facebook’s Oculus Go and Quest headsets on Oct. 17 starting at 5 p.m. PT.

The concert is being streamed by Los Angeles-based immersive entertainment startup Supersphere, and will be made available in Facebook’s Oculus Venues app. Fans can sign up for the concert on Oculus.com to be alerted ahead of time.”

Post joins Billie Eilish, Lupe Fiasco, H.E.R. and others who have tested out Oculus Venues for their concerts. For those who are less familiar, here’s more on Oculus Venues:

“Oculus Venues lets you attend LIVE events in VR with all the sounds, lights, and energy of really being there. You can watch the Golden State Warriors defend their title, rock out with top musical artists, catch an improv show, or enjoy a classic fright fest, complete with audience commentary. You can even get exclusive accessories or tops for your Oculus Avatar at select live events, including official NBA jerseys so you can show support for your favorite team!”

It’s currently a free experience, which is appropriate for the moment. The technology itself and the concept are still in the early stages, and require a $199 headset to engage properly.

On paper, the experience seems dope. Fans can participate in an event of their favorite musician and engage in a virtual experience that’s built to resemble a real-life experience. But its user base isn’t quite there yet. It’s currently has a 2.5 / 5 rating on Oculus from 994 reviews, which is pretty bad.

The reviews can be bucketed into a few groups:

Luckily for Oculus, the first issues are solvable. Companies rely on social media logins to verify identity and increase accountability, which is ironic since that same company, Facebook, has lacked accountability with data breaches and its questionable integrity with data. It’s a double-edged sword that Oculus is not alone. There’s a not-too-distant future where identity can be ensured outside of Facebook, but we aren’t collectively there yet.

The second issue will be improved as the product, experience, and internet connectivity improve over time.

But the third issue is harder to solve. Live performances, especially concerts, are a full sensory experience. Oculus Venues can’t compete with a muggy amphitheater of Phishheads who have formed a subculture around the genre. You can’t pass a blunt around with the folks sitting in front of you at a “virtual” J. Cole concert. These things matter to concert attendees!

Oculus Venues understands all this. The current product free for a reason. It wants to grow the base and “acquire” customers when it eventually charges for the product. It’s a ways away from the future it desires, but solving the Facebook requirement and technology issues will be a step in the right direction.