Hey! Great catching up with a bunch of you Wednesday and Thursday in LA.

I’ll be in Atlanta next weekend during A3C. I know some of you will be there too. If you’ll be in Atlanta, reply to this email and let me know. Would love to organize a brief get-together with members.

“Gucci Mane and Iggy Pop are among the stars of Gucci’s new Cruise 2020 campaign. Titled #ComeAsYouAre_RSVP, the campaign was shot at Villa La Furibonda by Harmony Korine, creative directed by the fashion label’s Alessandro Michele, and features music by Giorgio Moroder…

Gucci Mane is using one of Korine’s photos as the cover art for his next album, WOPTOBER II, which comes out October 17 via Atlantic. It’s the sequel to October 2016’s Woptober, as well the follow-up to Gucci Mane’s June 2019 mixtape Delusions of Grandeur.”

Many folks have said “it’s about damn time!” or “how did this JUST happen now?” I get it, the namesake branding opportunity has been sitting there. But pre-prison Gucci would not have had this opportunity.

The “Lemonade” rapper was released from prison in May 2016 after a two-year bid for possession of a firearm by a convicted felon. The rapper’s post-prison glow-up has been one of the stronger comeback stories in hip-hop. He changed his diet, got in shape, had a lavish wedding, and shed the codeine and lean that was synonymous with his brand.

The 39-year-old has now had all the glamorous profiles and luxury partnerships he desires. But real ones know, pre-prison Gucci was more influential than this current version. As CEO of Bricksquad 1017, Gucci was in full A&R mode. He helped elevate many of today’s biggest names: Young Thug, Nicki Minaj, Migos, Future, Soulja Boy, French Montana, Yo Gotti, Waka Flocka Flame, and more.

But his transition from Lean Guwop to Clean Guwop is aligned with an inflection point for hip-hop. In 2013, rappers weren’t getting the luxury partnerships that they get today. Hip-hop’s relationship with luxury was primarily tied to Dapper Dan. But today, A$AP Ferg is a spokesperson for Tiffany & Co. Guwop has his own Gucci sneaker line. And now Dapper Dan himself is an official designer and business partner with Gucci.

There’s a lot of excitement because Gucci is the most name-dropped fashion brand in hip-hop. Here’s a chart from Highsnobiety: 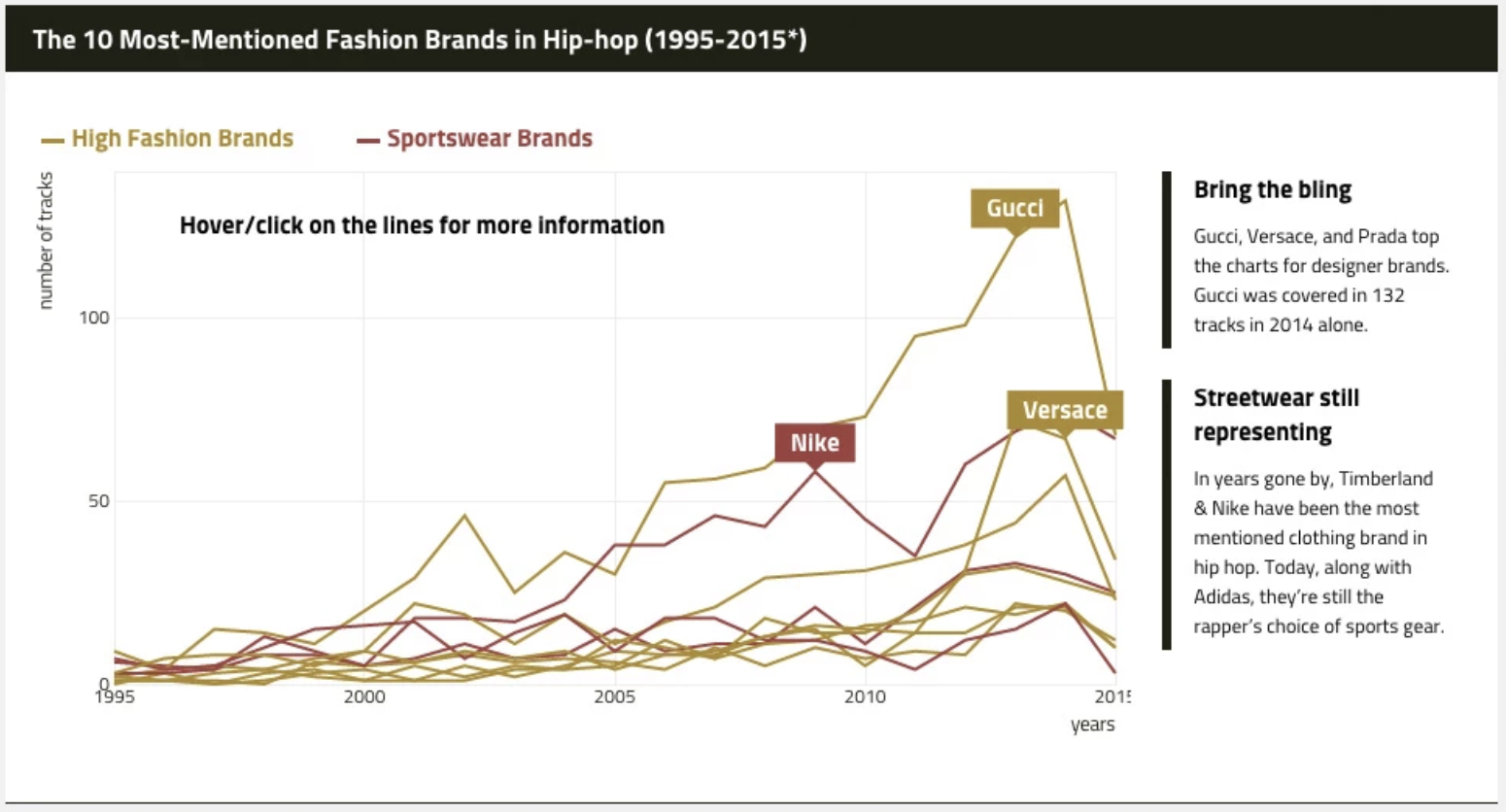 Back in February, there was a #BoycottGucci movement after its horrendous blackface sweater. Several rappers, including T.I., 50 Cent, and Soulja Boy, condemned the brand and stopped supporting the brand. But other rappers, like Future, said they couldn’t be bothered. Gucci Mane never publicly commented on the incident, but the backlash he’s received has been relatively minor. There’s been a few angry tweets and Instagram comments, but it pales in comparison to the support that the East Atlanta Santa continues to receive.

Here’s a promo clip of the campaign:

Cardi B, T.I., and Chance the Rapper on Netflix’s Rhythm + Flow

Apparently, T.I., Cardi B, and Chance the Rapper are our new Simon Cowell, Paula Abdul, and Randy Jackson. Netflix’s new music competition show will hit the streets to find the next rap superstar.

“The first four episodes of the three-week, 10-episode series hits Netflix on 10/9. These Rhythm + Flow audition episodes will take place in Los Angeles, New York, Chicago, and Atlanta. On 10/16, three more episodes will be released, featuring cyphers, rap battles, and music videos. The final three episodes, premiering 10/23, will focus on samples, collaborations, and declaring “the next hip-hop sensation.”

I know what you’re thinking, “another American Idol-like show?” From X-Factor to The Voice, we’ve seen numerous iterations of music competition reality shows over the past two decades. But these shows still command an audience. It’s a cash cow for broadcast networks. American Idol might not be the #1 show in America it was back when my guy Ruben Studdard was in his bag. But Idol’s most recent season was still ranked in the top 40, higher than The Bachelor (and you know The Bachelor ain’t going anywhere). The Voice was even higher at #20. The viewers are there.

The timing makes sense for Netflix, whose current strategy aligns with this type of content. Matthew Ball wrote about this in a REDEF article:

“To thrive in the content business, every network needs “great” shows, and “classic shows”, and arguably monocultural hits, too. Netflix certainly has all of these. But the bulk of its budget is spent in pursuit of the bulk of its viewership: non-Emmy winners…

In short, Netflix isn’t always hired to show “great TV”. They’re not always trying to “make great TV”. In fact, most TV is “bad”. If Netflix made more The Crowns and less overall content, it would be less popular, less watched, and slower growing.”

While Rhythm + Flow doesn’t have to be as huge as peak-American Idol, it still needs to be decent. Idol did a fantastic job of humanizing its competitors. Each episode was full of captivating stories about the auditioners’ livelihoods. Their narratives were built up to be validated or destroyed by a snap remark by judge Simon Cowell.

NBC perfected this formula with its Olympics coverage. Bob Costas had fans cheering hard as hell for handball athletes they had no idea about. Hustle + Flow has strength in its trio of judges. Cardi, T.I. and Chance seldom hold back, which helps. But who’s gonna be the show’s Ryan Seacrest? It needs a flagship host who can keep this same energy.

The three-week, ten-episode format makes sense. A reality show like this would be too much content to release all at once. But it could drag on and lose steam if stretched over ten weeks. The shorter format lets Netflix condense the run time and measure traction. There’s not much competition in this hip-hop competition space right now. Diddy’s revival of Making the Band is apparently in the works, but talks have been quiet in recent months.

Here’s a trailer from Netflix:

Roc Nation Unified is a new division of the company that is a “newly branded, full-service agency that will support artists, athletes, events, venues, leagues, teams, and brands. Roc Nation Unified will formally bring together and expand upon the company’s current existing infrastructure to offer clients a full scale of services – marketing, branding, sponsorship, philanthropic, and communications strategies,” according to the announcement.”

There are two things to address here. First, Roc Nation clearly LOVES co-leadership structure. Here’s what I wrote in July when it was announced that Omar Grant and Shari Bryant would serve as co-presidents of Roc Nation Records:

“To be fair, co-leadership structures are fairly common–even when the title doesn’t reflect it. The decision to team Grant and Bryant up might be a reflection of Roc Nation’s COO-CEO structure up top. Desiree Perez is the COO, Jay Brown is COO, and Jay Z is the founder. But they operate more like a ‘Big 3’ that collectively lead the company.

But even with a clear designation of roles and responsibilities, the lack of a clear lead can make decision-making difficult—especially for a company that is under drastic changes. It can also cause added stress. If one person’s slate of responsibilities has more influence on the company’s future, the “co” title might seem meaningless.”

I’m not still a fan of the structure, but it makes a slightly more sense with Roc Nation Unified. A full-service agency has many more aspects to optimize for all the activities that Roc Nation will pursue.

This brings me to my second point. New co-CEO Brett Yormark was the Chief Executive Officer of BSE Global, parent company of the Brooklyn Nets and Barclays Center. He’s an ideal fit because of his success and shortcomings during his 14-year tenure at BSE Global.

These aren’t all Yormark’s fault, but it comes with the territory.

He excelled and failed because of the opportunities he pursued. This experience will help Roc Nation’s next phase. Roc Nation itself was fairly opportunistic in its early days as well. But now that it’s an established entity in entertainment, both will need to be more diligent. The lessons learned should serve both Yormark and Roc Nation well.

A great, great episode of How I Built This. Tristan Walker’s journey through Silicon Valley has been a focal point for many black folks in tech. He was vulnerable and transparent about challenges with Walker & Co., regrets about fundraising, and more.

Damian Lillard won his rap battle against Shaquille O’Neal. I’m not even gonna share Shaq’s diss track cause it’s not good content. The only reason people liked Shaq’s diss is cause he used a well-known instrumental (Dr. Dre’s 1999 song “What’s The Difference?”) A well-known instrumental always elevates an average diss track–everyone sounds great over the “Otis” beat. But Dame bodied Shaq on a no-name beat, and it wasn’t even close.