The Chicago rapper’s religious summits are innovative and timely, but they won’t repair the damaged relationship with West’s former day-ones. 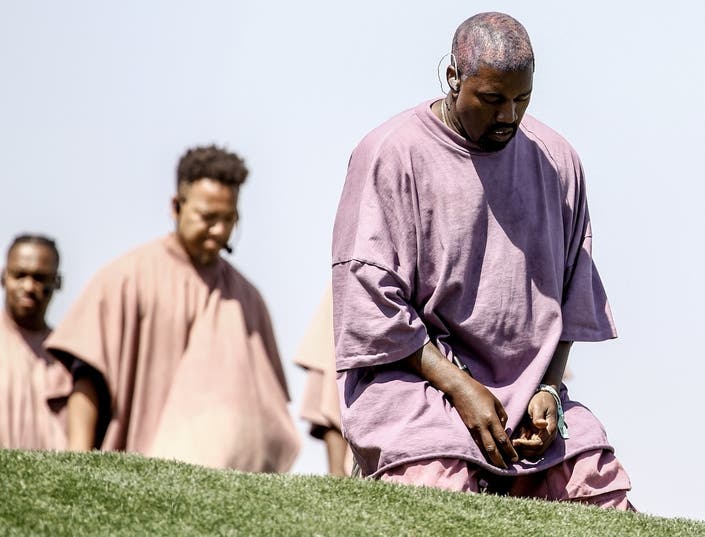 In March, Kanye West hinted that his Sunday Services would soon come to an end. “This is the last time on the mountain, so y’all gotta party with us,” West told the audience in Hollywood Hills, California. Seven months later, the 42-year-old rapper is still at it. He’s ramped up the services in anticipation for Jesus is King—his delayed album which will (supposedly) come to IMAX theaters on October 25. The pseudo-religious gatherings are a symbol of Ye’s quest for redemption and the literal cost he’s willing to pay for it.

Sunday Service blends the religious themes found throughout West’s music, the urban gospel tone of a Kirk Franklin album, and the televangelism tactics of a Creflo Dollar megachurch sermon. Historically, religion has been society’s primary outlet for community building. But as culture shifted, celebrities and brands have cultivated similarly-devoted followings. Kanye’s spiritual summits combine elements from the past and present. But despite the buzz they create, there’s a ceiling to their impact. Sunday Service will struggle to win back the fans who can’t forgive Ye for his controversial statements.

Community as brands, and brands as people

Last week, The Atlantic’s Derek Thompson wrote about the decline of religion in America. Since 1990, the percentage of the U.S. population that’s not affiliated with any religion has nearly tripled. He attributes most of the change to political shifts. In the 1970s, the GOP started forming a tighter alliance with the conservative, evangelical right. This fractured ties with many liberals (38% of whom are now unaffiliated with any religion).

For them, community must come from elsewhere. 2PM’s Web Smith wrote about consumerism’s role in community building in a recent brief (also referencing Thompson’s article):

“Product-based communities have augmented many consumers’ lives, influencing their senses of belonging. In this way, America has not become non-religious. Rather, America spent the last several decades forging new communities. These types of communities don’t show up in [Derek Thompson’s] polls. America believes in brands.”

Smith later used Peleton and its cult-like following as an example. According to Peleton’s CEO John Foley, its target customer is the 35-65 year old parent who can justify spending $2,000 on a stationary bike and its $40/month subscription. This customer is far more likely to be a secular liberal in the suburbs of Boston than an evangelical conservative in Mississippi.

But there’s an important difference between a Peleton bike and say, an Away suitcase. The stationary bike owners feel connected to the product because of their instructors. Peleton instructor Alex Toussaint has become a low-key celebrity out here. (Watch him get named-dropped in a rap song before Peleton does!) “People” brands have stronger connections with audiences than “company” brands.

I wrote about this last year in Why Rappers Started Running Their Own Music Festivals:

Sponsorship dollars can be higher at artist-run festivals too. Here’s another excerpt from Billboard‘s Dave Brooks on this topic:

“Not only do [artist curated] festivals get brands closer to the artist in charge, they also include increasingly valuable promotion on the act’s social media feeds, which boast far better engagement than a traditional festival’s social accounts.”

It’s more lucrative for Travis Scott to sponsor a brand at his own Astroworld festival than someone else’s.

Kanye is one of the most identifiable brands in hip-hop, but that brand’s standing has been turbulent. West was canceled by many after his political statements and repeated allegiance to Donald Trump. But in that same timespan, adidas’ Yeezy sneakers became the ninth-highest selling sneaker of 2018.

The West fanbase includes all walks of life so the sales aren’t that surprising. But catering to multiple subgroups of fans is a challenge for anyone. It’s especially hard when those subgroups don’t track on a standard progression of fandom. When artists and brands try to attract everyone, they often attract no one.

But Sunday Service has (temporarily) bucked this trend. It’s a community-building, vindication-seeking, religious-inspired, celebrity-laden, hypebeast-friendly expose that’s built to go viral on social media. He’s taken this service from a spacious ranch in Cody, Wyoming to an intimate A.M.E. church in Queens, New York. It works because of the access and parameters that Kanye sets. But as Kanye plans to scale, which is inevitable, new challenges await.

Clips from the first Sunday Service on January 6. The head sweeps in this are real.

The cost Kanye is willing to pay

Sunday Service is a far cry from ‘Stadium Ye’ who once ran hip-hop. His elaborate, futuristic stage production from Glow in the Dark and Yeezus tours have been replaced by open fields, sanctuaries, and amphitheaters. The events are free to attend, but capacity is limited. Most events max out at two or three thousand attendees, but the service in Queens held just 600.

Kanye, who can easily gross over $1 million per tour stop in his sleep, must spend at least a couple hundred thousand dollars to put on each Sunday Service. It’s a cost that Kanye—who earned $150 million this past year according to Forbes—can cover. But for Kanye, its less about the upfront cost and more about the rewards that he hopes will come.

There are direct rewards, like Sunday Service merch sales and promotion for the upcoming IMAX experience. But Kanye wants the indirect rewards. He wants to improve his public standing and make a societal impact.

There are several similarities between Sunday Service and J. Cole’s Dollar & a Dream Tour. In 2011, the “No Role Modelz” rapper let Nas down by shedding his mixtape roots to release a mainstream-friendly debut album, Cole World: The Sideline Story. Here’s what I wrote last year about the comeback plan for the double-platinum-no-features rapper:

“The North Carolina rapper, who was gearing up for his sophomore studio album Born Sinner, took [Jay] Brown’s advice and hosted a nine-city Dollar & A Dream Tour in June 2013. Tickets were sold at small concert halls on a first-come, first-serve basis. Each venue location was undisclosed until J. Cole tweeted it out a few hours before the show. Based on the high praise and reception, the Dreamville team brought the tour back in 2014 and 2015. Each year, Cole exclusively performed songs from his older mixtapes, The Warm Up and Friday Night Lights, respectively. Much to Cole’s surprise, fans knew every word of his old songs.

J. Cole made no money from ticket sales (proceeds from each $1 ticket were donated to The Dreamville Foundation) but it has already paid off. Since 2015, his traditional concert tours have made nearly $60 million. His fourth studio album, 4 Your Eyez Only, went platinum in four months, and his latest album, KOD, has already broken streaming records on Spotify and Apple Music.”

It worked well for Cole, but his stakes were much, much lower. When we simplify Cole’s situation, the guy released an album that his day-ones didn’t rock with, so he went back to the drawing board. All the greats have been there, done that. If Jay Z can bounce back from the “Sunshine” music video, there’s hope for the rest of hip-hop.

But that type of “misstep” is incomparable to the damage Ye caused by standing on tables at TMZ talkin’ bout “slavery was a choice.” Kanye has a much, much larger hill to climb.

A few weeks ago, Kanye’s wife Kim Kardashian West went on The View to describe Sunday Service. She called it a self-healing experience and that her husband is now ‘born again’. This framing positions Kanye’s journey as a comeback. It’s a strategic attempt to control a narrative that’s far too common in American culture. But it’s an ambitious storyline to stick to, especially for someone as unapologetic as Kanye.

Controlling the narrative is part of the modern communication playbook. And for better or worse, nobody does it better than the Kardashian-Jenner family.

One of the less-discussed aspects of fan acquisition—specifically with Kevin Kelly’s 1,000 True Fans theory—is that the next 1,000 fans will look very different than the original group. Artists often evolve to attract the mass. That evolution can’t be too dramatic (like Cole World: The Sideline Story) but the difference is still noticeable (like Cole’s 2014 Forest Hills Drive). Artists and brands would love to keep every fan as they get bigger and bigger, but that’s naive. Churn is accepted as a tradeoff for growth.

Facebook turned off some of its Ivy League base when it got rid of the original Wall. Remember that thing? Early adopters loved it, but it had to get dropped to scale the product. Kanye did the same when he traded in his signature backpack for stunna shades when Graduation dropped in 2007. It comes with the territory.

Kanye’s Sunday Service is an extreme version of this “evolution” because of the baggage it carries. His fanbase’s churn is compounded by his political statements, actions, and stances. The evolution was a turn-off (not unlike the liberals who left the church after its alignment with politics).

Some of those former fans are also turned off by Sunday Service’s use of the black church. At each stop, Kanye pulls together black church choirs to harmonize behind him. Church, even to a secular audience, reinforces forgiveness. It also builds a sense of connection that hip-hop holds in high regard. Childish Gambino, Chance the Rapper, and others have also taken fans to church in various concerts, songs, and events.

It’s a troubling connection because the black church (and black women specifically) are often tasked with healing the wounded. Although Kanye’s evoked religious themes in his music for decades, that “track record” is the last thing his former fans care about.

His critics have also questioned the exploitation of religion. The upcoming IMAX movie, merch, Yeezy sales, and other items will get a bump from the Sunday Services. On one hand, the critics are justified. But on the other hand, the same can be said about Creflo Dollar’s private jet. It’s all part of the same game.

On “Good Life”, Kanye said “50 told me go ‘head switch the style up. And if they hate then let ’em hate then watch the money pile up.” Back then, the statement felt like a premonition for his 2008 album 808s and Heartbreaks. The album’s style was a surprise to many. As was 2013’s Yeezus. But Kanye’s polarizing art often ages well over time.

Sunday Service is a highly-debated concept that may eventually inspire new models in both live performance and community building. Hip-hop has never had a problem tapping into religion to give fans a memorable experience. But it’s unlikely to expect that Kanye’s former fans can overlook everything he’s said and done since the 2016 election.

Kanye doesn’t need his lost fans to sell more Yeezys, clearly. But he needs them to attain the ubiquity that he’s valued his whole career. Kanye’s gatherings have gained traction, just as planned, but this is one hill that’s too hard to climb.