Hey! LA folks– I finalized my travel plans. I’d love to host a Happy Hour this Wednesday, October 2 in Hollywood. If you are interested, just reply to this email and let me know. I’ll also email the LA folks in a separate thread. It’s short notice, but would be great to meet up with those who are free!

This update covers Endeavor’s postponed IPO and how Ari Emanuel’s strategy reminds me of Drake, 2 Chainz stakes in both the A3C Festival and NBA G-League basketball team, and A24’s content strategy with Moonlight.

Last week, Hollywood super-agent Ari Emanuel’s Endeavor Group holding company postponed its IPO. Endeavor was pulled in the wake of Peleton’s disappointing public debut (shares slid 11% on opening day), and WeWork’s failed IPO attempt and drama with its disgraced former CEO Adam Neumann. It’s been a rocky IPO year, to say the least! But that rockiness has more to do with the unrealistic expectations for companies like Endeavor, WeWork, and Peleton that redefine their sectors with hybrid offerings but expect the public market to value them like SaaS startups.

This excerpt on Endeavor from a Los Angeles Times article was telling:

“Emanuel’s dream is to make Endeavor — already a powerful agency with a client roster that has included President Trump and Michael Moore, Martin Scorsese and Oprah Winfrey — into a global entertainment juggernaut. The IPO was intended to help fuel its ascent. The cash would have helped chip away at its $4.6-billion debt while funding future acquisitions. Now the firm is likely to face a host of financial pressures, and Emanuel — a man who has frequently said that he doesn’t fear failure, but who, until last week, had never experienced a prominent one — will have to navigate the challenges to come.”

When Peleton went public, its S-1 included this slide on the company’s definition: 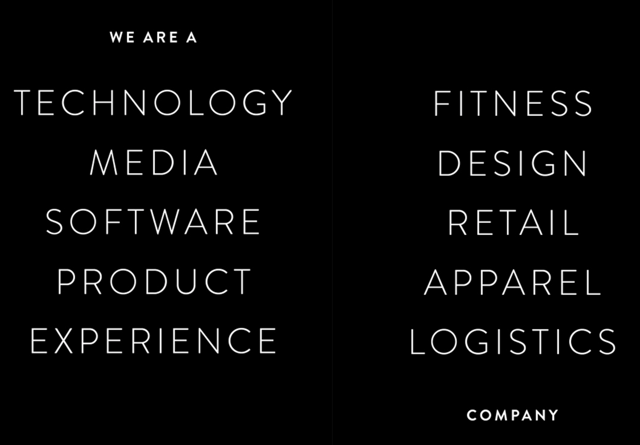 A similar slide can be made for Endeavor. Emanuel’s company is a talent, media, production, distribution, entertainment, promotion, mixed-martial arts, esports, bull-riding, beauty pageantry company. That’s just a few examples. There’s a lot more where that came from.

Endeavor’s numerous business interests was a challenge for investors to grasp. From The Wrap:

“According to insiders, investor confusion over the company’s business model was one of the reasons the planned IPO wasn’t getting the traction Emanuel had envisioned. “Endeavor is really just UFC and IMG, with a Hollywood talent agency attached,” he added, referencing the Ultimate Fighting Championship league and sports management company under the Endeavor umbrella. “There’s no synergy there.”

Endeavor’s portfolio is not too dissimilar from your favorite hip-hop megastar. Let’s look at the business of Drake. He sells his music to consumers and sells concert tickets to perform that music. That’s a fairly standard approach. But the “Mob Ties” artist also launched his own OVO Fest music festival. He owns the OVO Sound record label. He also a part-owner of the 100 Thieves esports team. He’s a Hollywood producer who gave life to HBO’s Euphoria and Netflix’s Top Boy. He’s a whiskey salesman for his Virginia Black brand. And interestingly enough, he’s now a private plane loaner to the Sacramento Kings. If Aubrey Graham, like Ari Emmanuel, copped a stake in a mixed martial arts league or beauty pageant, no one would be surprised.

Can you imagine if Drake’s holding company tried to go public? There would be a lot of laughs and criticism. Even if the offer was taken seriously, there would be challenges on how to value his numerous business units, questions about the synergies, and so on.

But I highly doubt that Drake or any of his peers would pursue this route. In 2018 there was a failed attempt to sell shares of Eminem’s royalties in an IPO. For an artist to go public, they would have to give up a tremendous amount of control to benefit from the influx of capital. It’s a tradeoff that wouldn’t make sense for most artists.

That’s necessarily the case for Endeavor. Emanuel has ambitious plans to grow his company and still wants to go public in the future. But the comparable still highlights how difficult it is to achieve that goal in the current market.

Speaking of hip-hop stars with numerous interests, 2 Chainz has been in his bag lately. The Rap or Go to The League artist recently acquired a stake in Atlanta’s A3C Festival.

“2 Chainz will be a creative curator and business advisor involved with curating panels and artist lineups, along with “developing the overall experience of A3C,” according to the announcement. This year he will be the closing keynote on Saturday October 12 in a fireside chat with the Dapper Dan.

Earlier this year, Paul Judge Media Group and The Gathering Spot acquired A3C and have revamped the festival, which is celebrating its 15th year.

“A3C has always been one of the most important places for artists to show off their creative ideas and to learn business moves,” 2 Chainz said. “I’ve moved from artist to being inside the owner’s box. I’m excited to be co-owner and to help shape A3C over the next decade to be the biggest festival on the planet–the festival for the future.”

The 42-year-old rapper’s co-owners are Paul Judge, an Atlanta-based technology entrepreneur and investor, and Ryan Wilson and TK Petersen of The Gathering Spot—a black-owned private member club in Atlanta.

This investment comes months after 2 Chainz invested in the Atlanta Hawks’ G-League affiliate team, the College Park Skyhawks. From the G League:

“2 Chainz will join an ownership group led by Principal Owner Tony Ressler and Vice Chair of the Board and Naismith Memorial Basketball Hall of Famer Grant Hill and adds to the group one of the most recognizable and respected leaders in the south Atlanta community.

“It’s exciting and a dream come TRU to be a part of a sports team, especially one in my community,” 2 Chainz said. “Being able to give back, create opportunities for the youth, inspire and show people what you can do if you believe in yourself and work hard makes this opportunity so meaningful to me.”

A majority of Trapital articles focus on the biggest artists because their strategies and management decisions are the most complex, but I often get asked about the tier below that. Chainz is still mainstream, but his investment portfolio represents that next tier.

The average valuation for an NBA team is nearly $2 billion. The average for a G-League team is approaching $10 million (according to Sports Business Daily). In 2014, the New York Knicks bought their G-League franchise affiliate for $5.5 million. It’s easy to assume that valuation has nearly doubled as a result of the skyrocketing NBA valuations since the 2014 TV deal and the G-League’s re-branding in 2017.

Let’s assume that $10 million valuation holds. 2 Chainz could have bought a 15% stake in the College Park Skyhawks for $1.5 million. It’s a fairly low purchase price, but at this level, the money is less important. Owners care more about bringing on partners who are aligned with their interest and complement their skillset. It’s the SMB-level business mentality.

This dynamic evaporates with the U.S. big four sports leagues– NFL, NBA, MLB, and NHL. The most aligned management teams can lose to a person with deeper pockets.

In 2018, Meek Mill’s boy Michael Rubin assembled a money team with Diddy and Stephen Curry to buy the Carolina Panthers but pulled out of the process when the cost continued to rise. The team was ultimately sold for $2.2 billion to hedge fund billionaire David Tepper.

The higher the stakes, the more money that comes in and the more politics that exist. That’s not necessarily a bad thing, but it comes with the territory. This is something to be aware of at each “stage” that hip-hop’s moguls (and moguls in the making) are exposed to.

Starting with Ex Machina by Alex Garland, The Witch by Robert Eggers, and Moonlight by Barry Jenkins, the first collection from A24 BOOKS celebrates the singular vision and unbridled artistry of these noted writer-directors, showcasing how they saw their films through from script to screen.

And a follow-on announcement today:

FIRST EDITION OF 2000 IS SOLD OUT. PRE-ORDER SECOND EDITION FOR ESTIMATED DELIVERY IN 10 WEEKS.”

A24 just made $120,000 revenue (and counting) from a three-year-old screenplay. It’s especially noteworthy for Moonlight—a movie that was made on a mere $1.5 million production budget. It’s one of the lowest-grossing Best Picture winners ever. But Moonlight, like most high-brow Oscar season films, has a small but mighty audience whose willingness to pay far exceeds the $15 ticket price.

Follow-on content has shifted dramatically in the movie streaming era. In 2004, I drove to my local Walmart to buy the 10th-anniversary edition of The Shawshank Redemption on DVD. It was a bit aggressive I’ll admit, but I really didn’t care. I already had the standard edition, but there was extra footage on that behind-the-scenes, and the new cover looked dope in my DVD collection. It felt like a low-key “event” that I could participate in for one of my favorite movies.

That market doesn’t exist in the same way today. Shawshank’s 25th anniversary was last week. It came and went with little fanfare. These opportunities exist in the streaming era, but it takes a bit more creativity to seek them out.

It wasn’t hard for A24 to release hardcover screenplays for Moonlight, Ex Machina, or The Witch. More movies can do this on their landmark anniversaries. Artists can do the same for their legendary albums too.

My February article How Artists Can Maximize Their Mixtape Anniversaries touched on this:

“Hip-hop fans want to reward artists to monetize their old mixtapes and back catalog. Fans will stream the music, attend concerts, and tell friends about it. Sample clearance will be an ongoing challenge. But if Kanye can clear a sample for Drake after all their recent drama, don’t rule anything out.”

There’s a reason the back catalog is valued! There’s plenty of creative ways to extend the shelf life for great content.