Hey! Happy Friday. As I mentioned yesterday, it’s Flex Friday! It’s time to hear your accomplishments this week. I’ll start with two. Ernest Wilkins interviewed The Ringer’s Shea Serrano on the Office Hours podcast. Sean Blanda hosted his fourth Pilcrow House event this week and had me as the guest speaker. Great times! Let’s hear more from the rest of you in our Slack group.

Today’s update covers the inaccuracies in the Forbes’ Hip-Hop Cash Kings List, Diddy’s investment in alkaline water company Aquahydrate, and the future of Tekashi 6ix9ine and clout-chasing in hip-hop.

The annual Forbes Hip-Hop Cash Kings List is starting to feel like an award show nominees announcement. But instead of arguing about who got snubbed, we argue about whose numbers don’t add up. The folks with the most questions are the “honorees” themselves.

Cardi B, Meek Mill, and Quality Control’s CEO Pierre “Pee” Thomas have all publicly questioned this year’s list. Kanye West is in this year’s top spot at $150 million in pre-tax earnings from June 2018 to June 2019 (mostly from Yeezy sales). The Jesus is King rapper has nearly doubled his frenemies Jay Z and Drake who sit at #2 ($81 million) and #3 ($75 million) respectively.

Here’s what I wrote about Forbes’ numbers in June, shortly after Jay Z was declared a billionaire:

These numbers can be overstated:

– Data is often self-reported. Public figures have lied to Forbes and other outlets to boost their status, gain publicity, which leads to future business opportunities (e.g. Wilbur Ross, Donald Trump)

– Liabilities aren’t always captured. Forbes applies conservative discounts to estimate, but there’s a tendency to lead with assets and revenue, and look less heavily at liabilities and cost(e.g. In 2016, Kanye West claimed to be $53 million in personal debt. A) Was that verifiable beyond hearsay? B) If so, was that ever accounted for?)

Meanwhile, these numbers can also be understated:

– Some folks don’t report all their assets or financial interests for various reasons (offshore accounts, businesses with moral/ethical conflicts, desire for anonymity)

– Numbers rely heavily on public knowledge. Anyone who’s generated enough wealth to be considered a billionaire likely has business interests the public doesn’t know about.

Let’s use Cardi B as an example. Here’s what she tweeted yesterday:

Where do Forbes be getting they numbers from cause they way off ?🧐

Forbes listed the Bronx rapper at $28 million (13th), conveniently behind her foe Nicki Minaj who is the 12 spot at $29 million.

In July, Cardi shared a since-deleted Instagram post of her guarantees from festival performances. She was slated to make over $11.6 million from 19 shows in two months: 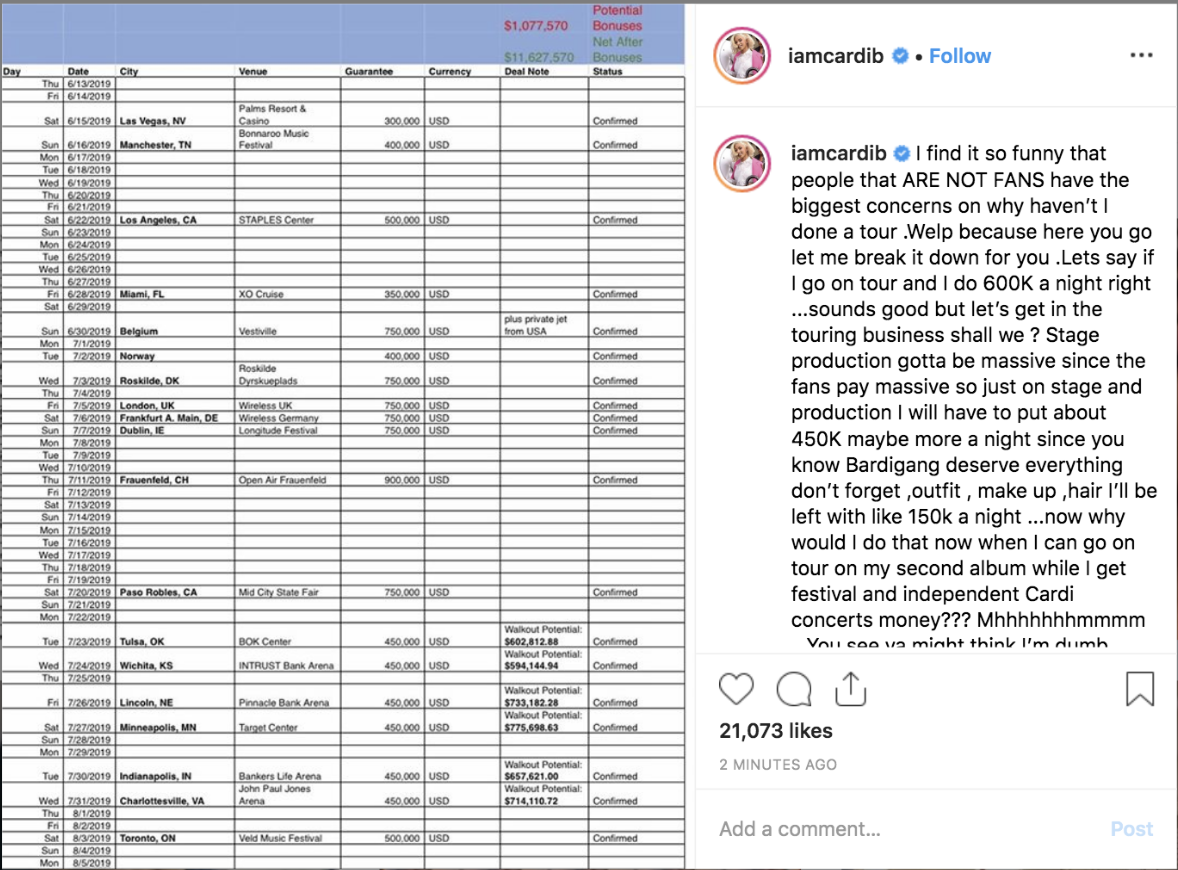 But that’s still less than half of the total shows she’s done in that span. Here’s what I wrote in July in Why Cardi B Doesn’t Need to Go on Tour:

I have the opposite perspective on Nicki Minaj. She did ~20 shows with JUICE WRLD in Europe, but she canceled her entire U.S. tour leg with Future. I have a hard time believing that she out-earned Cardi. But to Nicki’s credit, she’s been in the game for a minute. She has had several partnerships with existing brands. I am not sure what her terms are with Apple Music and Queen Radio.

But this is the challenge that Forbes faces. Despite Cardi B’s transparency, it’s still self-reported data. All her numbers seem justifiable, but if she added an extra $100,000 to every one of those performances, who would verify that? Her booking agents don’t want that data to be public anyway, so it’s in their best interest to let the story play out. I believe Cardi, but that’s my subjectivity. I might not give another rapper that leeway, which makes harder to be consistent.

Forbes still deserves credit for assembling these lists, but the validity will only get questioned more and more over time.

Diddy’s investment in alkaline water is starting to pay off. From Forbes:

Diddy became the face of [Aquahydrate] alongside Wahlberg shortly thereafter, and the pair invested $20 million in Aquahydrate over the years while billionaire Ron Burkle’s Yucaipa added another $27 million. They aren’t the only ones with lofty ambitions for the brand: last week the Alkaline Water Co., the publicly-traded purveyor of competitor Alkaline88, bought Aquahydrate in an all-stock deal that valued the latter at about $50 million.

For Diddy, who ranks No. 4 on our recently-released list of hip-hop’s top earners and boasts a net worth of $740 million, alkaline water holdings are just a drop in his financial bucket. His Diageo-backed Ciroc vodka—and its myriad flavors, from Red Berry to Summer Watermelon—is responsible for the lion’s share of his wealth. But it’s clear he thinks alkaline water, flavored variants included, could swell his portfolio. So do his new partners.

Brands place high expectations on hip-hop moguls to strengthen a company’s popularity. There have been dozens of turnaround success stories to justify the interest. Many dormant brands have found their footing on the back of hip-hop’s biggest stars.

But many of those opportunities were low-hanging fruit. For years, companies were reluctant to collaborate with hip-hop. The early opportunities that surfaced, like Timbaland, Nike, and Reebok, were obvious moves. Their likelihood of success was much higher than the average brand partnership.

Diddy’s Ciroc partnership is a great example of a “low-hanging fruit” partnership. Vodka has been the most popular hard liquor beverage for years. But brown liquor, like Crown Royal and Hennessy, was the beverage of choice for many black folks. Diddy identified the opportunity to revive a dormant brand and reposition a product to a consumer that he understood. While Ciroc’s performance has dipped in recent years, Diddy still deserves credit for its initial rise.

Aquahydrate is quite the opposite. The alkaline water “sector” has grown considerably. International growth has hovered around 18% year-over-year. The sector itself gets more attention than the individual brands, which makes it harder for one particular brand to stand out from the pack. This makes Diddy’s job harder.

Diddy’s branding talents are strongest when he can bring his rockstar energy to companies in stable sectors. He did this with both Ciroc and Sean John. The clothing company was one of the first to market grown-folks clothing for the urban consumer.

Aquahydrate’s parent company, Alkaline Water, has had growing revenue but a declining stock price. Alkaline Water is hoping that this new acquisition, and its connection to Diddy, will help steer things in the right direction. It’s an understandable goal, but the likelihood of that happening is harder than it looks.

From the New York Times

For the entirety of his brief, meteoric career, the rapper known as Tekashi 69 (or 6ix9ine) fashioned himself as a recalcitrant hellion, intent on instigating conflict for its own sake. He baited law enforcement on social media with guns and money. He live-streamed himself in bed with other rappers’ girlfriends.

But on Wednesday, in a federal courtroom in Manhattan, the 6ix9ine persona vanished. In its place was considerate, cordial Daniel Hernandez, the Dr. Jekyll to 6ix9ine’s Mr. Hyde. He was there for a purpose his alter ego probably never foresaw: to testify against his former crew, the Nine Trey Gangsta Bloods.

Tekashi has been the leader of the clout-chasing movement. He and his peers intentionally stirred up drama to rise through the ranks. This is nothing new in hip-hop (see Why 50 Hasn’t Been Canceled) but 6ix9ine brought this to another level.

His rise had many people questioning the integrity of where hip-hop was headed. In podcast interviews and casual conversations, I often get asked if rapping talent still matters. The question references the growth of the hip-hop ecosystem and opportunities to earn money outside album sales and touring. But the question also referenced the ability for someone like 69 to rise to fame purely on clout.

Amidst the hilarious memes of Tekashi’s snitchin’ in court this week, there’s a proverbial exhale in hip-hop. His downfall has been positioned as a victory against the clout chasers.

Here’s an article from Rolling Stone:

“6ix9ine’s fall coincides with the crashing of the entire SoundCloud rap wave: XXXTentacion has been murdered; Lil Peep is dead of a drug overdose; Lil Xan recently went to rehab. Danny was the movement’s defining face. His behavior was unforgivable, but his instincts as an influencer were immaculate, and that only made his critics hate him more, extending the cycle of popularity for as long as it could be sustained.

Instagram was Danny’s MTV, and trap music was his grunge, but the ironic, media-savvy distance previous generations had maintained between themselves and their entertainment had for him collapsed. He was a confused child of the internet who’d pierced the realm of stardom, but failed to understand where the theatrics were supposed to end.”

Tekashi’s demise may stall this current form of clout clashing, which is good, but hip-hop is not in the clear. Shock value and virality are both core to hip-hop’s identity. Artists will be forced to find creative ways to make a name for themselves. But hopefully, those methods will look less and less like what we’ve experienced the past two years with Tekashi 6ix9ine.