Hey! If you haven’t gotten an email invite to our Slack Group, join here. If you’re having issues, reply to the email and let me know. There’s an interesting thread started about the “Mt Rushmore of Hip-Hop Business” that I’ve been thinking about ever since…

This update covers Rihanna’s deal with Amazon to stream and sell Savage x Fenty, “outrage Twitter” and the sales bump it may have on both Earthgang and OutKast, and Drake’s revival of the U.K. crime drama Top Boy.

In case you didn’t know, this past week belonged to Rihanna. Tuesday night was her Savage x Fenty show at New York Fashion Week. Here’s a breakdown from The Hollywood Reporter:

Two days later, she had another New York event at her Diamond Ball. From Billboard:

One would expect the fifth anniversary of Rihanna’s Diamond Ball, which benefits her Clara Lionel Foundation, to be a big spectacle — especially following the grand Savage x Fenty runway show just a few days prior on Tuesday (Sept. 10).

But instead, Thursday night’s gala felt intimate with its compact red carpet that led to the doors of New York’s iconic Cipriani Wall Street venue and the lush flowers that adorned the walls. For a superstar who has hands tied to various endeavors — from makeup to a clothing line — the charity event had a welcomed sense of calm.

She put DJ Khaled to work twice in the same week! Can’t hate on that.

At fashion week, Rihanna did something atypical. She prohibited guest cellphones and electronic devices because Amazon Prime Video had exclusive rights to tape the event. She agreed to a deal with Prime to exclusively stream the show next Friday, September 20.

According to Amazon, this is a “shoppable visual event”. Select garments from the Savage X Fenty line is already available on Amazon, which is an interesting move. Savage x Fenty has many of the characteristics seen in today’s DTC brands:

But many DTC companies proudly stay off Amazon. Last year, Amazon met with a bunch of them to understand their resistance and incentivize them to join. The response was tepid. “Selling on Amazon doesn’t work for a customer-centric brand…They basically want to reduce us from a brand to a product,” said Melanie Travis, founder of swimwear brand Andie.

No one would confuse Savage x Fenty for a product that lacks branding. Both Fenty and Savage have stronger identities than most digitally native vertical brands. But there are a few strategic reasons why Rihanna partnered with Amazon:

After an awards show or sports championship (the most-watched live TV programs), there’s often a streaming bump or sales bump for a particular artist’s music. But we rarely discuss the bump after a polarizing viral tweet that gets everyone talking.

This week’s catalyst was YesJulz: The enigmatic internet personality who launched a tirade with this tweet:

Earthgang is like the OutKast of this generation only with two Andre’s. I’m so here for it.

She made a cross-generation comparison to a legendary group (which will always piss off the ol’ heads) and dismissed the legacy of Big Boi, which struck a nerve with true OutKast fans who appreciate the duo’s complementary dynamic (and reluctantly watched the mainstream culture’s adoration of Andre 3000 during the “Hey Ya!” run).

I don’t have the streaming data, but I bet that Earthgang, who just released a new album on September 6, got an additional exposure and boost from folks who had no idea who they were and checked out their music. I also bet that OutKast’s catalog got an extra boost too. As a proxy, here’s the Google Trend for Earthgang. Notice the spike when their album dropped, but also notice the additional uptick when hell broke loose on social media: 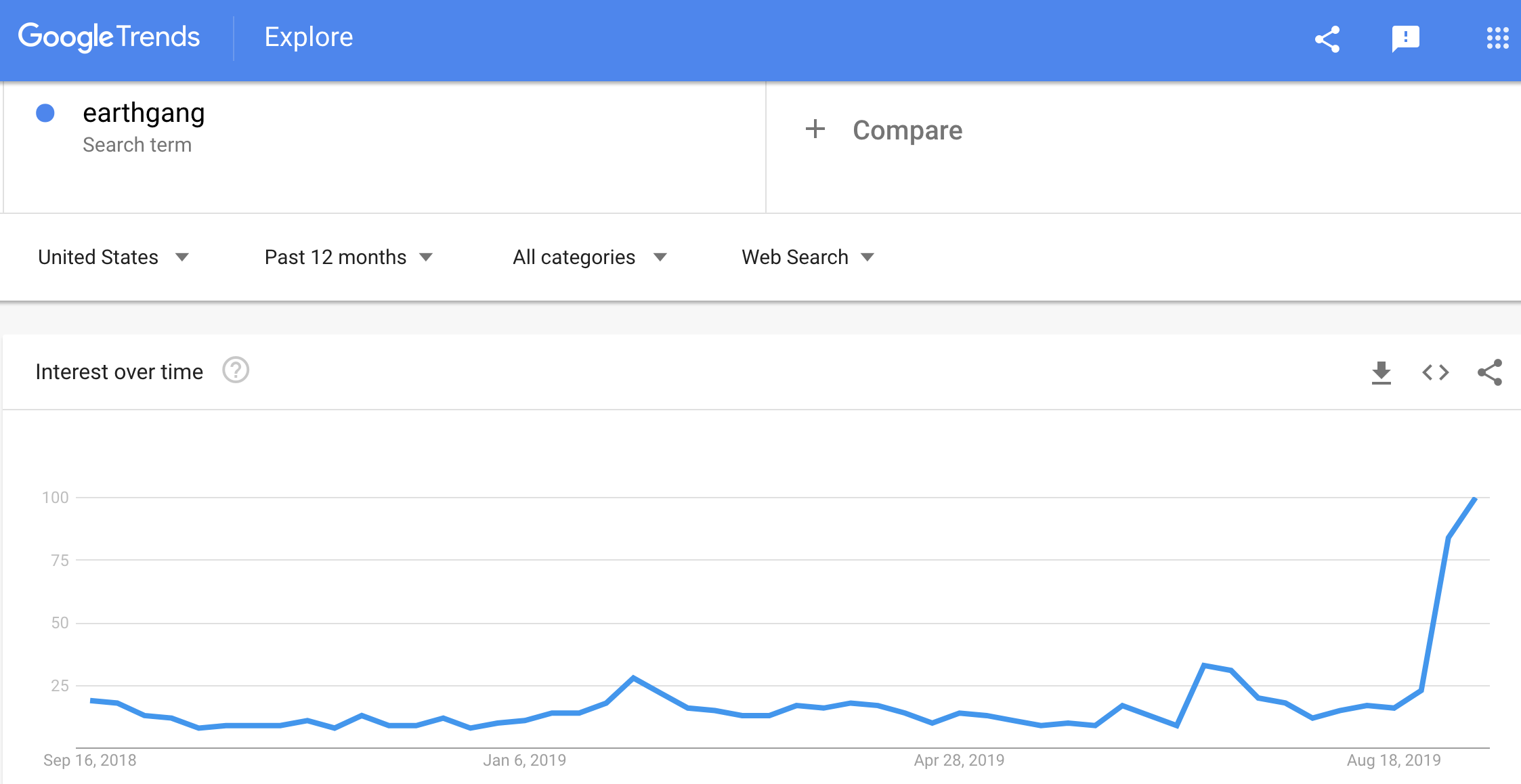 Remember when Jacquees declared himself the King of R&B back in December? Twitter almost burned down. But during the melee, Jacquees and other popular R&B artists were rumored to have gotten streaming spikes.

The Jacquees, EarthGang, 50 Best Rapper List are all examples of old vs. new hip-hop comparisons that drive outrage. But that outrage leads to additional streams. It makes me wonder how much of these streams are driven by plants. Is that cynical? Yes. But we all know that hip-hop lives and dies by publicity stunts.

“If you haven’t heard of Top Boy before, just like superstar rapper Drake, you’ll soon be hooked.

Top Boy, which premieres all 10 episodes on Netflix Friday, is a continuation of a cult hit series which aired on the U.K.’s Channel 4 between 2011 and 2013. The crime drama, set in modern-day east London, charts the ins and outs of the street-level drug trade and with it the dangers that come with being top boy, or top dog.

So the legend goes, Drake was devastated to learn that there was no more Top Boy after the two seasons that aired between 2011 and 2013. So what to do? Revive it, of course.

In 2017, Drake struck a deal with Netflix to serve as executive producer on a 10-part third season of Top Boy. He told The Hollywood Reporter that he discovered the show on YouTube and was immediately drawn in.

“And that human element drew me in,” he said at the time. “I started just looking them up. Like, who are these people? Are these actors I should know? Are they just famous over there? I remember I hit [Drake’s manager] Future, and I was just like, ‘This show is incredible.'”

Once again, Drake is in his entertainment bag. Here’s what I wrote three months ago in advance of Euphoria’s premiere on HBO:

“This is the perfect role for someone like Drake. He always finds opportunities to connect himself with a rising athlete, artist, or sports team. Look at how he acted during the NBA Finals. After each game he walked through the tunnel like he just played 42 minutes himself. It’s an extension of the thesis I laid out a couple weeks ago in Why Drake’s Stimulus Package Can’t Save Everyone. Sometimes it works, but sometimes it helps Drake more than anyone else.”

Drake’s relationship to Top Boy is relatable but different. Without Drake’s backing as an executive producer (which requires him to pay at least 25% of the production cost), Top Boy might never have come back.

If this was the music industry, Drake would have got some A&R credit. He identified a diamond in the rough, dusted it off, and gave it the polish it needed. It’s ironic though, because that’s been the ongoing knock on his management with OVO Sound! Despite the proverbial Drake stimulus package, the label has yet to break an artist that achieved sustainable success. (I took some heat for not giving Party Next Door more credit, but it’s safe to say that his moment came and went).

I believe that Drake will eventually make a more permanent foray into Hollywood. It will be some combination of producing and acting. In one of my earliest Trapital articles, I compared Drake to Will Smith. They were both calculated in their career decisions and transitioned back and forth between music and Hollywood. They both prioritized commercial accolades over critical acclaim. People like that are less tied to the craft, and more tied to the money. And since they’re more tied to the money, they are more likely to pursue opportunities outside their craft to make that money.