Hey! The Trapital Slack group is now live. This week I will send invites out in groups based on common fields. Participation is encouraged but optional! I know that some of you prefer to maintain confidentiality and anonymity, which is perfectly fine.

A well-run music festival heightens opportunities for the rest of hip-hop culture. But a poorly-run festival casts a bad light for everyone—especially those who may consider launching one.

This past weekend’s Lil’ WeezyAna Fest in New Orleans fell into the latter group. It was a shitshow.

A medical tent and concession booths near the stage were overrun, and sections of fencing were pushed down. The medical tent was left in tatters on the ground…

The wood frames and sheet metal fronts of several beverage booths were destroyed; tables were overturned in a frenzied rush. Some people then took the opportunity to steal, concessions employees said. Cash registers and tip jars were knocked over; money and personal items were taken.

Lil’ WeezyAna, now in its fifth year, should be a smooth operation by now. It’s a single-day event with only 10 musical acts. It’s seven hours long. I’ve been to music festivals in Connecticut that are the same size. Expectations aren’t THAT high. According to additional reports, they ran out of water, there were no ‘free water stations’ as most festivals often have, no shade despite the hot weather, not enough medical workers on staff, and relaxed security which led to several gunshot scares.

This year, the festival moved to a larger venue to accommodate 15,000 attendees. At $75 a ticket, this event yielded over $1 million in ticket sales, and much more in sponsorship and concessions. Growing pains are part of the game, but the mayhem that ensued this past weekend is unacceptable. There’s enough money coming through to cover essentials

Lil’ WeezyAna Fest is hardly alone in its poor management. Rolling Loud has had its fair share of issues. This year’s Miami show had a stampede, gun scares, and sound quality issues. The first-ever Rolling Loud was plagued with issues too.

It’s alarming that in 2019—a year when music festival mayhem has become cultural schadenfreude (e.g. Fyre Festival documentaries, Woodstock ’99 content, Woodstock 50’s cancellation) that any festival would try to cut corners. But with the vast number of festivals today, there’s always gonna be a few bad apples.

As I wrote last year in Why Rappers Started Running Their Own Music Festivals, artist-run festivals often have a comparative advantage with local talent, and a stronger opportunity to leverage their brand for sponsorship dollars. But those advantages shouldn’t absolve the need to meet operational standards.

I take some caution in laying the hammer down on safety issues at rap concerts, but not much. One of my first Trapital articles, How Damon Dash Brought Rap Concerts Back, highlights the unfair burden that rap concerts have faced in the music industry and how the Hard Knock Life Tour dealt with it.

But Wayne and the Rolling Loud co-founders have been around the block enough times to fix these issues. Plus, other hip-hop music festivals have had successful inaugural runs without major issues.

“Nipsey Hussle was a visionary who believed in the power of optimism, inspiration, and action. PUMA x TMC was a project about which he cared deeply. We release it today as a tribute to his vision and his legacy. 100% of the net proceeds from the sale of the PUMA x TMC Collection will go directly to the Neighborhood Nip Foundation, an organization dedicated to empowering the South Los Angeles community and neighborhoods alike across the globe.”

The 18-item collection sold out in less than a day. Here’s a screenshot of some of the items: 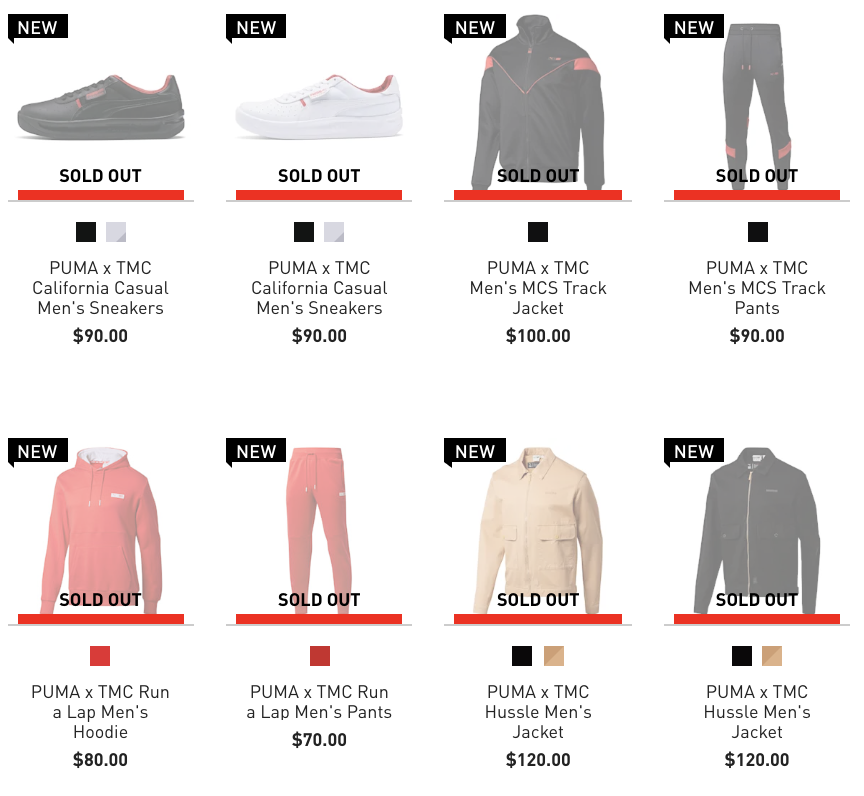 It’s great to see the proceeds go to the Neighborhood Nip Foundation, which will open doors for youth who want to break into music. Atlantic Records, which distributed Nip’s Grammy-nominated Victory Lap, has already donated a reported $500,000 to the foundation.

Puma will initially lose money on each item sold, but the apparel company still benefits in the long run.

As I wrote in my most recent NFL-Roc Nation update, these type of merchandise sales create goodwill for the organizations that produce and sell the product. Puma has also made a social media campaign to boost its exposure:

“Mention us on Instagram @PUMA with #PUMAXTMC for a chance to be featured.”

When a big brand sells clothes and donates proceeds to foundations or charities, its a form of “partnership philanthropy.”

Let’s say that the only way for consumers to contribute to the Neighborhood Nip Foundation was to donate directly on the website. There’s a good number of people who will donate. And Neighborhood Nip would receive a majority of those donations after processing fees.

But for better or worse, more people like to show their activism. The vanity may irk some of you, but that’s the ethos of social media. A physical good that shows someone’s activism also creates social proofing, which drives more sales. While a higher proportion of the revenue goes towards covering the costs of good sold, the number of sales made and overall revenue may outpace standalone donations.

Nipsey had built up incredible respect in hip-hop, business, and activist circles. Fans have wanted to show their appreciation since his untimely death. The Marathon Clothing store was temporarily stocked out of due to the high demand. This is a good way for the Neighborhood Nip foundation to benefit from this.

I am not sure if charities and foundations approach “partnership philanthropy” and assess the tradeoffs with this type of analysis, but they should. It’s a simple math equation based on a sales forecast. If the numbers don’t add up for said partnership, the best route forward may be a direct donation on the charity or foundation’s website.

“Kanye [West] plunked down some serious money for a property called Monster Lake Ranch. The asking price was $14 million for the huge chunk of land outside Cody, Wyoming.

The Ranch itself has 8 lodging units and is known for “monster trout” fishing. It has 2 fresh water lakes, a restaurant, an event center and meeting facilities. And — it’s a ranch, right — so there are lots of horse barns, corrals and lots of horsies. Fun fact … Cody is known as the “rodeo capital of the world.” Imagine Sunday Service at the rodeo?!?”

Kanye West is no stranger to Wyoming. It was the creative home for G.O.O.D. Music’s series of seven-track albums in 2018. That event blessed us with Pusha T’s Daytona, Kanye and Kid Cudi’s Kids See Ghosts, and that forgettable Ye album. But last year’s Wyoming summit got lost in the mix. It was overshadowed by West’s antics at TMZ, his “slavery was a choice” statement, his relationship with Donald Trump, and his mental health state.

Kanye has hosted similar events in other locations like Hawai’i in 2010 for My Beautiful Dark Twisted Fantasy. But Wyoming could be a permanent home. This massive ranch has a plethora of barns, corrals, and facilities to host events.

In Kanye’s long 1 hour and 45 minute long 2018 interview with Charlamagne tha God, they walked through Kanye’s 300 acres of land in Calabassas. “I’m gonna build five properties, so it’s my first community. I’m getting into development. It’s just the next frontier for me.”

Based on the momentum of Kanye’s Sunday Services, it may also be a future location for a music festival. I am hardly the first to compare Sunday Services to a cult-like experience. Ranches have been home to many communes. (I recently saw Once Upon a Time… In Hollywood. Brad Pitt’s trip to the Spahn Ranch commune is forever etched into my brain). And even though Kanye is “canceled,” his Sunday Services still sell out instantly.

Don’t be surprised when Kanye West finds a way to incorporate this ranch into his upcoming album rollout, festival, concert, or some other revenue-generating opportunity.

But I’m warning y’all right now. If I find out Kanye’s future music festival has any safety or security issues, I’m gettin on my soapbox immediately to start yellin’.