What Chance the Rapper Gets Wrong About Ownership

For years, Chance the Rapper has emphasized the importance of artist independence. His experience, similar to Russ and other rappers, has been “look at me, I did it. Y’all can too.”

But last week on The Breakfast Club, Lil’ Chano from the 79th took his ideology one step further:

Chance advised indie artists not to sign a record, distribution, publishing, or management deal. His blanket statement was met with pushback. Chance clapped back at the critics with, “Im convinced all the niggas in the replies work at a label 🤣🤣”

The 26-year-old rapper is hardly alone in his push for artist independence. Record label deals are commonly referred to as modern-day sharecropping. In fairness, there are plenty of bad deals out there. Back in 2012, Chance himself was offered a laughable $120,000 for a six-album deal!

But music’s biggest stars are still signed to labels for a reason. Many of them had the opportunity to become independent but still re-upped their deal with more favorable terms. Chance’s advice comes from an earnest place, but the details and nuance are important for those who want to maximize their independence.

What does ‘independent’ even mean?

Chance’s independence has been hotly-contested for years. He’s been accused of being an industry plant on several occasions. In 2016, Apple Music gave Chance $500,000, two commercials, and premiere placement on the streaming service in exchange for two weeks of exclusivity for his Grammy Award-winning Coloring Book. His critics view this as a deal with major backing, thus nullifying Chance’s indie status. But Chance views it as a short-term business deal. He’s advised other indie artists to do the same if presented with similar opportunities.

For some, any unsigned artist is ‘independent’. But artist-owned indie record labels can cloud that definition. Others use the industry’s traditional definition: any artist that’s not signed to a major label (or any of their imprints) is independent. But that’s just as much of a grey area. Roc Nation is not a major label, but no one would considers the artists on its label ‘independent’.

Independence is a spectrum. Both ends of that spectrum are extreme cases. One end is complete ownership: the artist who only sell music on their own website. The other end is a full partnership where the artist is controlled in a 360 deal. Most artists—signed and unsigned—lie somewhere in the middle. They are in some sort of “deal” to gain distribution, promotion, or money.

In March, I wrote that Def Jam should split its record label to get the most out of its new Rap Camp initiative and best serve today’s rising acts:

“Like most labels today, Def Jam faces two challenges. First, it needs to convince artists that labels are still viable. Rosenberg’s label competes with non-label options, like staying independent or signing with a distribution service. Second, it needs to convince artists that Def Jam is the best label to sign with. These are two related, but very different challenges.

Def Jam can address both with this split. Rap Camp has all the tools to entice indie artists. It’s designed to build camaraderie, provide album placement, and boost publicity with the docu-series. But if Rap Camp was open to indie artists and those yet to be signed, then Def Jam can select participants from a wider and stronger talent base.”

This proposal is essentially a distribution arm for Def Jam. Since the definition of independence is increasingly grey, it’s a bit myopic to expect today’s top talent to quickly lock in to a long-term binding deal. For labels as prominent as Def Jam (owned by Universal), this added flexibility will help them attract a wide range of artists with superstar potential. The result would be similar to my recent suggestion for Roc Nation. Different parts of the organization can serve different artists: 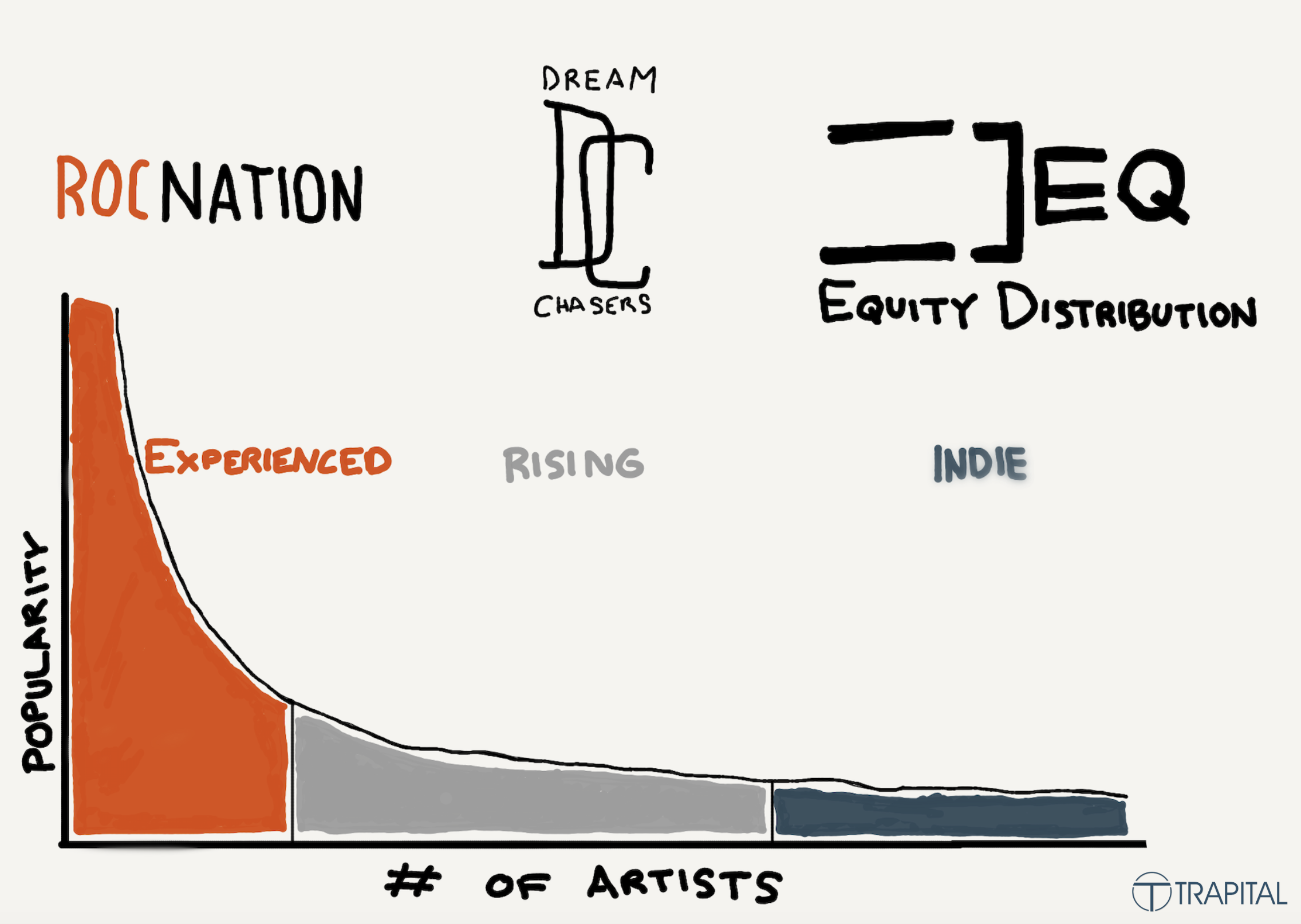 Now, there’s nothing wrong with labels defining their scope. A label whose primary goal is to develop the next Rihanna will have sharp focus. But the path to becoming “the next Rihanna” is less linear than it was before. If a label that wants to maximize that opportunity, it needs to be flexible.

A few months ago, Troy Carter shared his thoughts on the “independent wave” in an interview with Cherie Hu at the Midem Conference:

“There’s a false narrative out there right now: ‘Oh, every artist wants to be independent’. Taylor Swift doesn’t want to be on TuneCore! No offense. Taylor Swift was out of her deal and decided to re-up with Universal. She didn’t do it for the money. She doesn’t need the money. It’s the experience [at Universal].”

He’s right. At a certain level, superstars want to work with the best in the game. Beyonce, Ariana Grande, Post Malone, Drake, and Taylor Swift are all tied to the major record labels for a reason. Despite their massive social media followings and strength of their standalone brands, they still want access to distribution that will maximize their reach.

This is where the music and tech are similar. Is it possible to build a successful tech company without VC funding? Yes, MailChimp is a bootstrapped company that’s on track to hit $700 million in annual revenue this year. But there’s a difference between MailChimp’s $700 million and Uber’s $11 billion revenue. It’s incredibly hard to build a tech company that earns Uber’s revenue without venture capital funding.

Could a major record label have helped Chance’s The Big Day?

Chance’s challenge is that his indie strategy is similar to MailChimp, but his expectations are similar to Uber. At the end of The Breakfast Club interview, he reflected on why he wouldn’t sign a record label deal at this point in his career:

“Even if there was an astronomical number that did benefit me and there were the craziest terms in the world that have never been done before. I’m at this point where I’m a beacon of this whole thing. Everything is about narrative and how you’re represented. There’s people who aren’t like Sylvia Rhone who want to see this all apart so they can prove that you need them to make this work.”

Chance’s steadfast desire to validate his business model is understandable. His brand would take a hit if he switched his style up (even if he was offered a ridiculous, Jay Z-Live Nation type deal). It’s one of the many tradeoffs he’s accepted as an advocate for this movement. But there’s two things to keep in mind:

That last point echoes the commercial performance of Chance’s album, The Big Day. Chance was open about his goal to debut at #1 on the Billboard charts, but he lost that top spot to NF. Now, there are several advantages that NF has over Chance, but NF also has Capitol Records behind him. Meanwhile, Chance has his own team.

The reception to The Big Day has been mixed, which likely stunted his first-week album sales. But would Chance’s promotional strategy have been stronger if it was backed by a major?

For instance, Chance launched a bizarre promotional offer with Lyft. Riders could download his album for free, but those free downloads didn’t count toward album sales. The promotion was intended to increase exposure, but why go through the effort if the sales don’t count? Sure, many people who acquire digital albums are more likely to stream the album, but this tactic could have been better executed.

Is it possible to be successful and independent? Of course. Chance has proved this time and time again. He owns his music. He earns a higher revenue share than NF or any other signed artist. That difference matters. Artist independence is heavily-aligned with the ownership themes that run through several Trapital articles. Ownership-minded folks are in deals where their revenue or profit share is higher, but overall dollar amounts are smaller. That’s the standard tradeoff.

Some day, Chance may very well land the #1 album on the charts. But will the artists who follow Chance’s strategy be able to do the same? The tradeoffs between ownership and partnership will always come to light. There are exceptions to every rule, but there’s a spectrum for a reason.