Hey! A few quick updates before we get to today’s update:

Today’s update is about Travis Scott’s Look Mom I can Fly documentary and the economy that’s been created since ‘Astroworld’, why Kanye West’s next album means for his partnership mentality, and challenges with the NFL-Roc Nation Inspire Change campaign.

Since watching Travis Scott’s Look Mom I Can Fly, I’ve become more interested in the concept of an album’s “economy.” It’s a slightly different take on my recent article, How Rappers’ Started Getting More Mileage Out of Their Music. “Mileage” highlights the options available to extend an album’s shelf-life. The “economy” looks more at drivers that create new opportunities that weren’t previously available.

For instance, Beyonce got incredible mileage out of Lemonade, but her economy didn’t dramatically expand afterward. She was already a megastar. Many of those same opportunities were available after her 2013 Beyonce album. If anything, it’s the media landscape (Netflix, Tidal, HBO deals) caught up to Bey’s potential.

It’s a very different position than Travis Scott, who has truly ascended in the past twelve months.

It’s now been one year since Astroworld debuted. Scott had some hits before that album, but he wasn’t considered one of hip-hop’s biggest draws. He was on hip-hop’s second or third tier of popularity. His previous two albums, Rodeo and Birds in the Trap Sing McKnight, were mostly popular in hip-hop circles. But back then, Travis Scott didn’t pass the Mom test.

I isolate that song because it accounted for 71% of Astroworld’s streams back in December 2018. That percentage might be similar for most lead singles on albums, but most other albums as big as Astroworld have at least a few singles that propel it to stardom. Astroworld has one. For better or worse, Astroworld was “Sicko Mode.”

Here’s a chart from the New York Times: 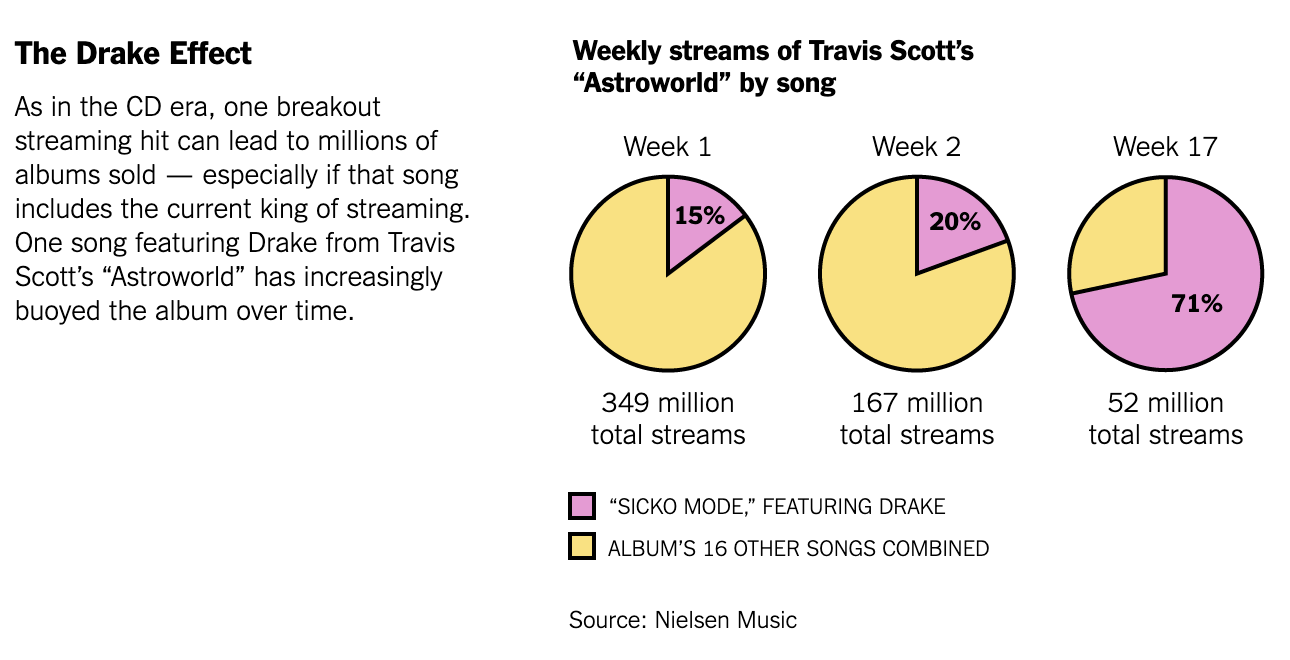 The album is also one of the strongest benefactors of the Drake stimulus package. The artists who get the most out of it already had momentum. Drake is most effective as a boost to a machine that’s already in motion.

Astroworld also benefitted from the Kardashian-Jenner effect. Similarly, Travis was in the perfect spot to benefit from Kylie Jenner’s massive following. In contrast, Kanye West had already reached the peaks of pop culture before dating Kim Kardashian. And Tyga, Kylie’s ex-boyfriend, was at a relative lull in his career when he dated Kylie Jenner. (Note – I don’t buy into the Kardashian curse. I’m not an apologist either. The Kardashians deserve criticism for certain things too. But Travis is clearly debunking the myth of the curse.)

Since Astroworld dropped, Travis Scott has capitalized on the following:

The list keeps growing. “Sicko Mode” is the difference between Look Mom I Can Fly dropping on Netflix as opposed to YouTube, Mass Appeal, Genius, or a smaller, hip-hop-oriented media outlet. “Sicko Mode” is the difference between performing at the Super Bowl and performing at a Houston Astros World Series game. No offense to the Astros, but there are levels to this.

All are still great opportunities, but Travis’ momentum got him to the next level. 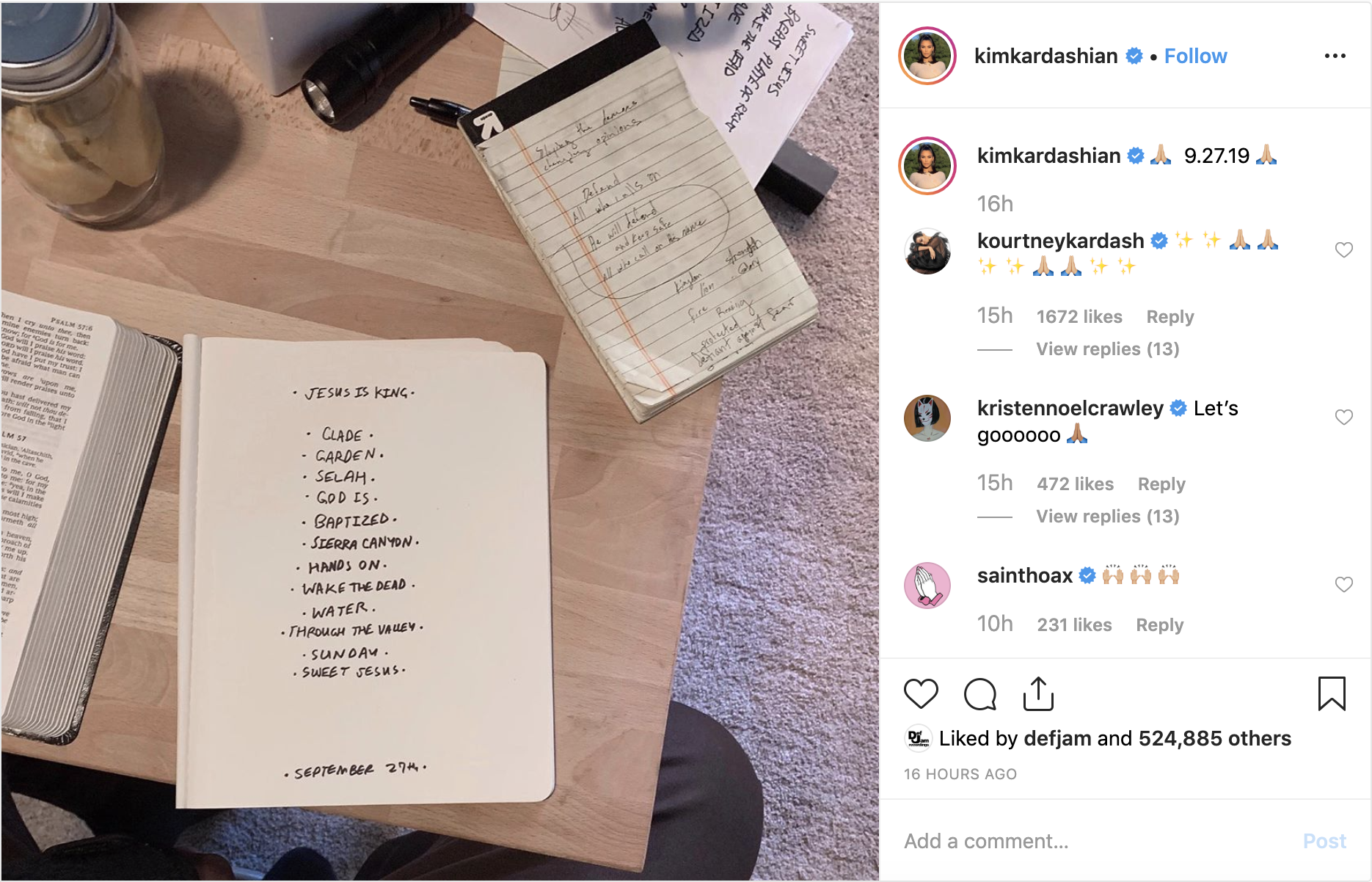 It was only a matter of time before Kanye West found a way to package his Sunday Services. It’s a tracklist for Jesus is King, with a release date (September 27) and a Bible that’s conveniently opened up to the book of Psalms, the name of West’s youngest child.

Sunday Service has essentially become a self-promotional vehicle for Kanye West. Since the beginning of 2019, clips of Kanye making beats behind a church choir went viral.

These services may come from a genuine place, but there’s an attempt to “humanize” the Chicago rapper. His “slavery was a choice” comments at TMZ was one of the lowest moments in his public standing. He wants redemption. The black church has been a sign of redemption for many. The lackluster response to his last album, Ye, is a sign that something will have to change if he wants to regain his place in music.

Ironically, Kanye makes this push when he’s having his strongest financial success in fashion and apparel. According to Forbes, Yeezy is a $1.5 billion behemoth that Ye collects royalties on. It’s a complete flip from where Kanye was. Fans fell in love with the pink polos and backpack guy who was striving to make it.

The challenge for Ye—and the reason why Jesus is King matters— is because Yeezy currently relies on the hype that drives his sneaker sales. They’ve had a strong run the past few years, but what happens when they are no longer popular? Sure, Kanye may luck out and Yeezys become perennial like Jordan’s, but that’s a lot to bank on.

It’s in Kanye’s best interest to have a strong public standing. It helps him pivot into other business opportunities. He has a partnership-minded mentality. That’s why he partnered with adidas to sell his sneakers. That’s why he tried to get put on by the European fashion world. And that’s why he signed to Roc-a-Fella / Def Jam (a deal that he now wants out of).

For partnership-minded artists, their public standing is their insurance policy. If major brands face too much backlash when partnering with an artist, then the artist will lose the deal. Meanwhile, ownership-minded folks don’t need that. If their customers are happy, that’s all that matters.

Yeezy sees the big picture. He doesn’t want to be ostracized for his wild statements (as ironic as that may sound). He wants redemption and acceptance. Sunday Services are as much a business move as they are a personal move.

Proceeds from this venture will support organizations committed to the key priorities of Inspire Change: education and economic empowerment, police and community relations, and criminal justice reform. The Inspire Change apparel line, designed by artists, will be available later in the 2019 season.

Songs of the Season is a multi-tier, season-long initiative that will highlight superstars and emerging artists of all genres… Meek Mill, Meghan Trainor, and Rapsody will be the first Inspire Change advocates of the 2019 NFL Season and will perform a free concert at the NFL Kickoff Experience presented by EA SPORTS MADDEN NFL 20…

There’s more, but you get the point. Proceeds from apparel sales and benefit concert tickets go directly to initiatives tied to the issues they want to address.

It leverages both the NFL and Roc Nation’s core competencies—monetizing entertainment (through ticket sales, merchandise, and sponsorship). If effective, it will build goodwill and increases exposure for both organizations. There’s technically no direct financial gain, but indirect gain will come as a result of the goodwill.

The challenge with this, and similar initiatives, is that it doesn’t address the hard, unscalable work that’s often required to create change. Do communities with poor police and community relations need more money? If so, will that money empower lawyers or lawmakers to lobby for local policy changes that will make policing safer? Will it strengthen pipelines to hire more police officers who reflect the communities they serve? If so, which organizations will they support to make that happen?

Those are fine details that may be too granular for a 300-word press release (or not thought out yet) but the devil is in the details!

Jay Z and Roger Goodell are aware of the criticism and welcome to accept it. They believe that results will speak for themselves and the public consciousness will turn around. For that to happen, the messaging and communication has to change. With press releases like this, which highlight the apparel sales, it’s just asking critics to go wild and laugh at the opportunity to “profit” off social justice. But if practical details are shared, it’s easier to get buy-in that both organizations need.

Enjoy the weekend! I’m heading to Lake Tahoe. Hope everyone is doing something fun. Be safe!