How Political Hip-Hop Has Evolved Over Time

Political hip-hop music is everywhere, but it doesn’t feel that way to mainstream fans. That disconnect is a reflection of hip-hop’s progression and the ever-changing media landscape. 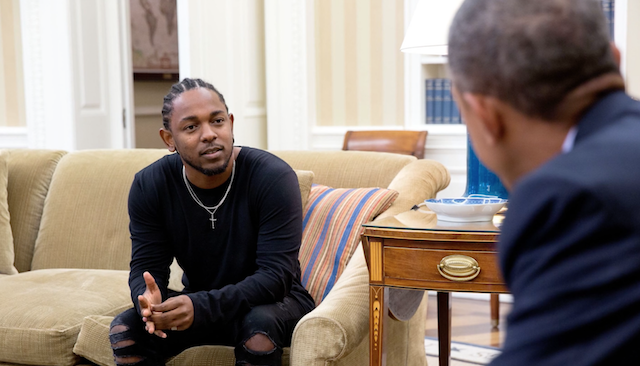 K. Dot and President Obama in the Oval Office in 2016 (Vimeo via VIBE)

In the late 80s and early 90s, rappers relied on their music to voice the struggles of black America. Public Enemy’s Chuck D famously called rap the ‘Black CNN.’ Most of the social issues that impacted hip-hop artists weren’t reflected accurately in mainstream media. And hip-hop itself wasn’t respected as an artform. Thus, the fight for rap’s relevancy and the fight for social justice were intertwined. “Fight the Power” was a call to action. A voice for the underrepresented. A validation of culture.

Hip-hop now has more of that credibility it once sought after. Social media has amplified the voice of those that Public Enemy and others advocated for. Rap’s biggest stars also have access to platforms that were once unattainable. And truthfully, there’s more political hip-hop music and activism than ever before. Childish Gambino, Rapsody, J. Cole and others have released critically-acclaimed music to share their beliefs with the world.

But mainstream hip-hop fans still feel like political hip-hop is lacking. There’s a stark difference between perception and reality. That disconnect stems from how political rap is both consumed and delivered in our changing media landscape.

Last month, Cardi B took to Instagram to explain why she doesn’t release songs about serious subjects. From Instagram (@iamcardib):

Gotta love the raw delivery, but someone had to say it. Cardi went onto name Rapsody, Tierra Whack, and others who don’t get the support they deserve. Her comments were initially directed at Jermaine Dupri’s criticism of women in hip-hop, but her comments apply to political rap too. Can you imagine if Cardi B released a song about her adoration for FDR? Even if the song was fire, it would get hated on by her fans, Fox News, and everyone in between.

Instead, Cardi relies on other channels for activism. Earlier this month, she interviewed presidential candidate Bernie Sanders. The Bronx rapper gathered questions from her fans to ask the Vermont Senator in a 1-1 chat:

She maximized her impact by leveraging different platforms for different audiences. This is a topic I recently spoke about in an episode of the Trapital Podcast. Moody Jones—head of digital at EMPIRE—talked about the need for artists to be consistent across platforms, but be cognizant of the unique differences across media. Cardi’s followers on Facebook are not necessarily the same folks who follow her on Instagram.

The same is true with companies. The first step is to demonstrate consistency across the brand. The second step is to adjust tactics to cater to different audiences. Each platform caters to a different type of person. If a company launches a podcast, that podcast will reach a slightly different audience than its IGTV clips will.

In hip-hop’s golden age, those outlets weren’t available. Remember, Chuck D was known as a politically-conscious rapper. Meanwhile, Cardi is a mainstream artist who occasionally delves into politics. But despite Chuck D’s interest in political discourse, he could have never landed an interview with Ronald Reagan or Michael Dukakis. They would have called up the secret service if the Public Enemy frontman got near either of them.

Today’s biggest stars have access that was once unprecedented. If one of hip-hop’s superstars makes a politically-minded record–with all the other options available– its because they truly want to release a record. It’s a subtle difference that has heightened the expectations of the artform.

The underlying themes don’t get discussed

Political hip-hop has shifted in a few ways. First, today’s rappers who focus on political music (e.g. Killer Mike) have much smaller followings than their predecessors. Mike’s group Run the Jewels has a passionate following, but it lives on the outskirts of mainstream rap. Second, today’s rappers have a wider range of political opinions and criticisms (e.g. Lupe Fiasco calling President Obama a terrorist or Chance the Rapper’s ‘black people don’t have to be Democrats‘). Third, and most importantly, when today’s political rap songs go viral, the discussion is usually centered around critiques of the music itself.

Songs like “Fight the Power” received criticism too, but the underlying issues were also discussed. Today’s songs rarely start the proverbial “serious discussion about race” that they intend to.

To be fair, some of the criticism is warranted. Songs like Macklemore’s “White Privilege II” had little chance to succeed. The intent was there, but the impact was off. Joyner Lucas’ “I’m Not Racist” music video was even more problematic. Its underlying takeaway (that racism can be solved with a hug…? what the hell?) was torn apart so much that there’s a YouTube compilation video of all the negative reactions to the polarizing music video. It was Kendall-Jenner-Pepsi-commercial levels bad!

But even Childish Gambino’s “This is America”—which received both acclaim and criticism—didn’t spark a true conversation about its themes. The conversation centered around the video’s graphic scenes. Its deeper themes were treated like easter eggs in a Marvel movie, not conversation starters. Despite its intent, “This is America” legacy lives in a vacuum surrounded by the broader issues it wanted to raise.

When today’s fans ask for political rap, they want albums like Kendrick Lamar’s To Pimp a Butterfly. But there’s only so many Kendrick Lamars. To Pimp a Butterfly might seem fairly recent, but a lot’s changed since that album dropped in March 2015. That project came at the height of the Black Lives Matter movement. There was an unspoken call to action for someone like Kendrick to speak on. And despite the respectability politics behind that album, and many of Kendrick’s beliefs, it still filled that void for many.

Hip-hop media has also changed considerably since 2015. Today, Kendrick can deliver his message via visual albums, documentaries, or other media. He can also build partnerships with companies to take action.

There’s a natural progression of what’s possible for hip-hop’s activism. Most artists can communicate their desired message through songs, videos, and social media. Once the artist gains power, that message can be amplified through documentaries, op-eds, interviews, etc. And after that, the biggest artists have the power to build the partnerships, initiatives, and businesses to act on their desired change: 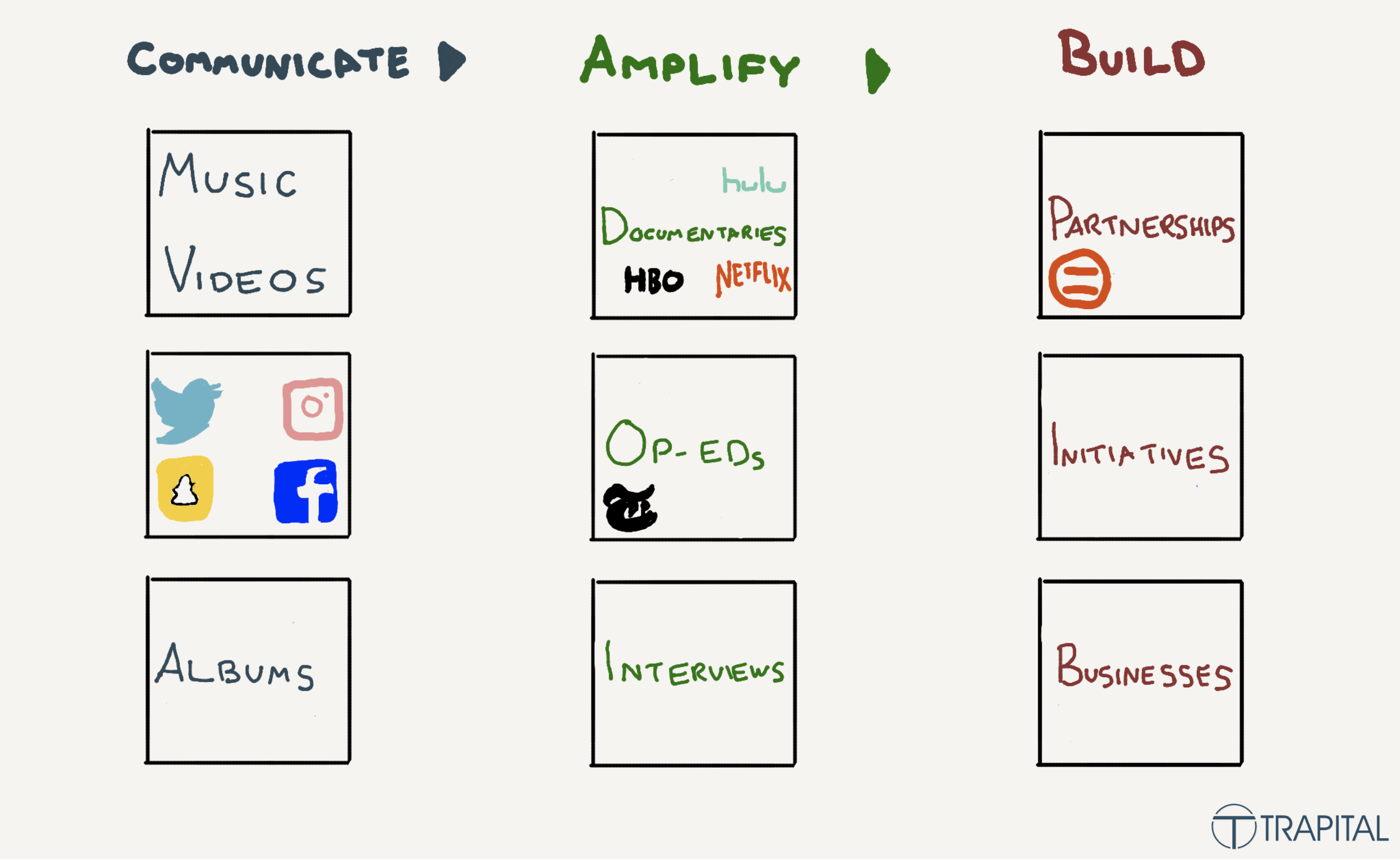 This is the evolution, but I hesitate to call it a progression. Artists who ‘communicate’ shouldn’t feel obligated to move toward ‘amplify’ or ‘build’. It’s a reflection of what’s possible.

What the future holds

Jay Z’s career reflects this evolution. In 2003, Jay Z relied on songs like “99 Problems” to share perspective on racial profiling. As Jay gained power, his access grew. In 2016, he releases short-form video ‘The War on Drugs is an Epic Fail‘ for the New York Times. And earlier this month, he partnered with the NFL to support social justice. The NFL-Roc Nation deal has plenty of issues—as I covered both here and here—but it still reflects hip-hop’s potential as a change agent for the issues it wants to resolve.

While hip-hop collectively has more access than ever, the strongest channels are still reserved for the stars. Recent albums like Joey Bada$$’ All Amerikkkan Bada$$ and Rapsody’s Eve have communicated their political messages well and received strong praise. Music is still the primary channel for them to communicate their issues now, but that may change as their careers progress.

As hip-hop grew in power, it lost its covered underdog status. The rebellious position drove Public Enemy’s persona. Even Kanye West’s “George Bush doesn’t care about black people” statement in 2005 reflected the sentiment at the time. But in today’s culture, hip-hop is less of an underdog than it was back then. And in today’s media environment, an artist ‘speaking out’ hardly captures headlines. Songs like YG and Nipsey Hussle’s “Fuck Donald Trump” don’t surprise anyone. Eminem’s anti-Trump cypher was a story for a couple of days, but folks largely forgot about it soon after.

When the shock value is gone, cultural relevance can often go with it. It’s a shame. Today’s artists have put in some best work to date that speaks on these issues. But for both better and worse, hip-hop is in a very different place.