Hey! Thanks again to those who provided feedback. Based on what’s shared last week and those I’ve emailed directly, here are some common themes to make Trapital even better:

As I digest and plan, expect to see more of that feedback taken into consideration.

This update covers whether Jay Z is too big to fail, and Jay Z’s potential ownership stake in an NFL team. I also added in some questions at the bottom to discuss on Reddit.

“I’m not saying that it can’t turn into some good shit. We’re also talking about a guy who single-handedly picked up the phone and called Jermaine to tell him not to do it…. When we all had that meeting with the NFL, all that shit was part of the same shit.

“I’m not gonna condemn it and be like, ‘That shit’s wack.’ For me, I want to look at it intelligently because I know a lot of what was happening before and how we were engaged last year as a community…. At the end of the day, [Dupri] took a beating for doing the same shit. And I guarantee you they didn’t pay him as much as they’re about to pay [JAY].”

Cox referred to the So So Def producer’s decision to collaborate with the NFL for a free concert series leading up to the last year’s Super Bowl in the Atlanta, GA.

Here’s what Dupri said last year in an interview with TMZ Sports:

“Boycotts and marches don’t seem like they work to me, I’m sorry. I think they should send a message while they’re onstage, take advantage of your platform.”

After his comments, JD was called a sellout, received little support from the broader hip-hop community, and was urged by Jay Z himself not to do the deal.

Jay Z has received a fair share of criticism for his NFL deal, but he has several strong voices in his corner too. Cardi B believes Jay Z has the power to bring Colin Kaepernick back to the NFL. DJ Khaled aired his support for Jay Z. And Freddie Gibbs said “Fuck Colin Kaepernick” and called us all ‘crabs’ for hatin’ on Jay Z.

The difference in support is telling. In business and culture, popular public figures have benefitted from blind reverence. This narrative drove the tech world’s adoration of Steve Jobs. He was widely known as a jerk who berated employees and treated others poorly. Leaders who idolize Jobs often rationalize his shortcomings as a necessary tradeoff for his relentless pursuit of excellence.

It’s a cultural version of ‘too big to fail’. During the 2008 economic recession, several of the U.S. automotive companies and major banks were bailed out by the government. While those efforts helped society as a whole, the companies that received the stimulus package did not face the same consequences for failures that put smaller firms out of business.

For Jay Z, it’s not the government that bailed him out. Instead, it’s the culture. His social capital rises with each win, but the L’s he takes don’t stick for long. His missteps are protected by those who aren’t willing to accept the nuanced reality of a polarizing business deal.

Meanwhile, Jermaine Dupri is small enough to fail. He didn’t attain enough social capital for folks to question the status quo if he goes against it.

As I’ve written countless times on Trapital, Jay Z is a rare combination of hip-hop’s greatest rapper, richest rapper, and most-respected figure. Many people, even those who don’t listen to his music, want him to see him win. He’s chartered frontiers that were out of reach for folks like him. His positive impact can’t be ignored. But it’s hard to have a nuanced discussion in the tribal nature of today’s society where public figures are either worshiped or canceled.

This weekend, Kerry Coddett wrote an article in the Washington Post that reminded us of some shortcomings from Jay Z’s partnership with the Brooklyn Nets:

As a Brooklyn native, I remember when the community fiercely protested the construction of Barclays Center, but with Jay-Z’s backing and the promise of jobs and affordable housing, the black community soon rallied behind him. It’s nine years later, and Jay-Z has sold his 0.15 percent ownership stake in the Brooklyn Nets, who play at Barclays, while thousands of displaced residents are still waiting for the apartments that may not be completed for another six years. It may have been a smart business move for Jay-Z, but the community ultimately did not see the change that was promised in exchange for support. Fast forward to this recent NFL deal, and I can’t help but wonder if Jay-Z’s new initiative will suffer the same fate.

We need more of this. We can learn as much from Jay Z’s wins and we can from his missteps. (and I mean REAL missteps, not “Kingdom Come wasn’t a good album” missteps.) He’s a trailblazer. And by design, trailblazers will make mistakes.

And if Freddie Gibbs thinks I’m a crab for calling that out, then I can sleep well at night.

Based on TMZ reports, Jay Z is in talks to own a substantial stake of an NFL team. To be clear, a “substantial stake” could be 10%. Nowhere close to a majority, but still much larger than the 0.15% stake that Jay Z had in the Brooklyn Nets. The last NFL team sold was the Carolina Panthers, which was sold for $2.2 billion in 2018. So Hov is likely looking at an investment north of $200 million.

But is a $200 million ownership stake in an NFL team worth it right now?

In the NBA, team valuations have risen dramatically. But those increases were driven by two big shifts. First, the NBA’s 2014 TV deal with ESPN and Turner sports was a landmark nine-year $24 million deal. It nearly tripled the average annual value of the deal from $966 million to $2.6 billion. It’s the main reason why NBA team valuations and player contracts have skyrocketed. In 2010, Joe Lacob and his group bought the Golden State Warriors for $450 million. The team is now worth a reported $3.5 billion. He came in at the perfect time.

Second, social media has strengthened the platform of NBA players. The league’s top players are more popular than players in the other major U.S. sports leagues. It adds to the personal connection and worldwide recognition that these players have.

Unfortunately for the NFL, those cases do not exist. The current NFL TV deal with Fox, NBC, and CBS started in 2013 and will expire after the 2022 season. Contract discussions for the next deal will likely start soon. NFL viewership has declined each year since that new deal began. It’s hard to see that valuation increasing.

NFL’s players have also become less popular over time. Last decade, stars like LaDainian Tomlinson, Randy Moss, Peyton Manning, and Tom Brady felt omnipresent. There are far less NFL players with that same level of draw. The average NFL player is nowhere near as popular as the average NBA player.

But even as viewership declines, companies spend more money than ever to advertise in NFL games. Here’s are two charts from Bloomberg: 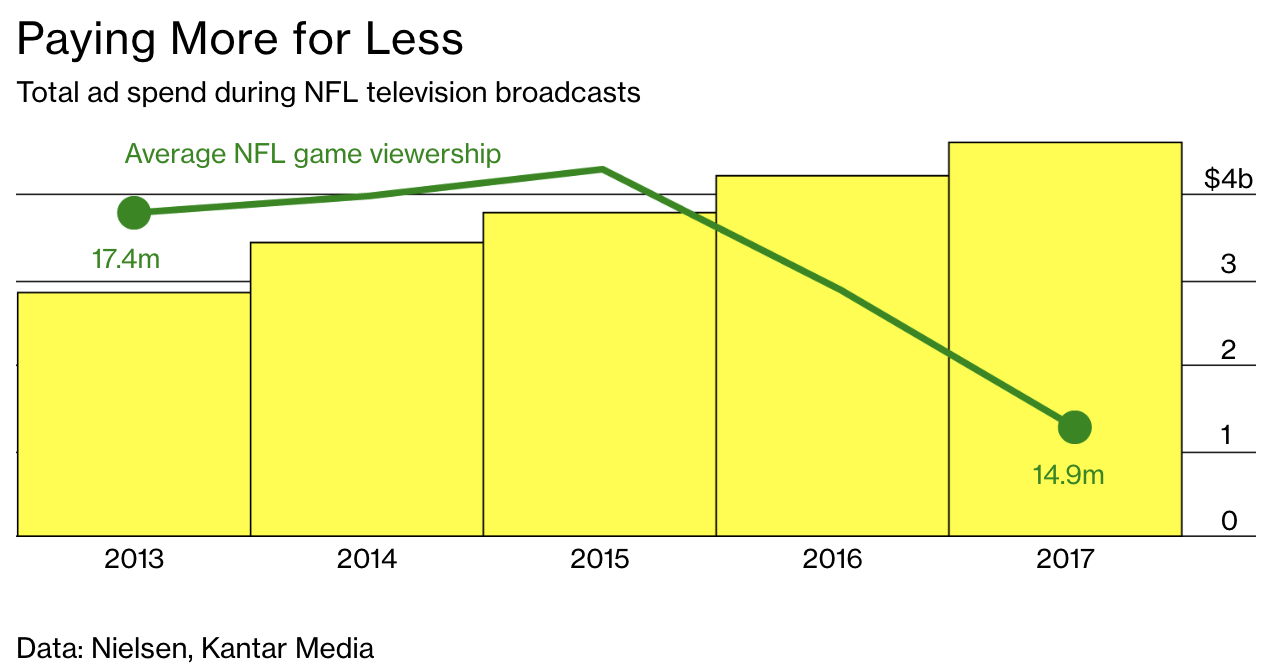 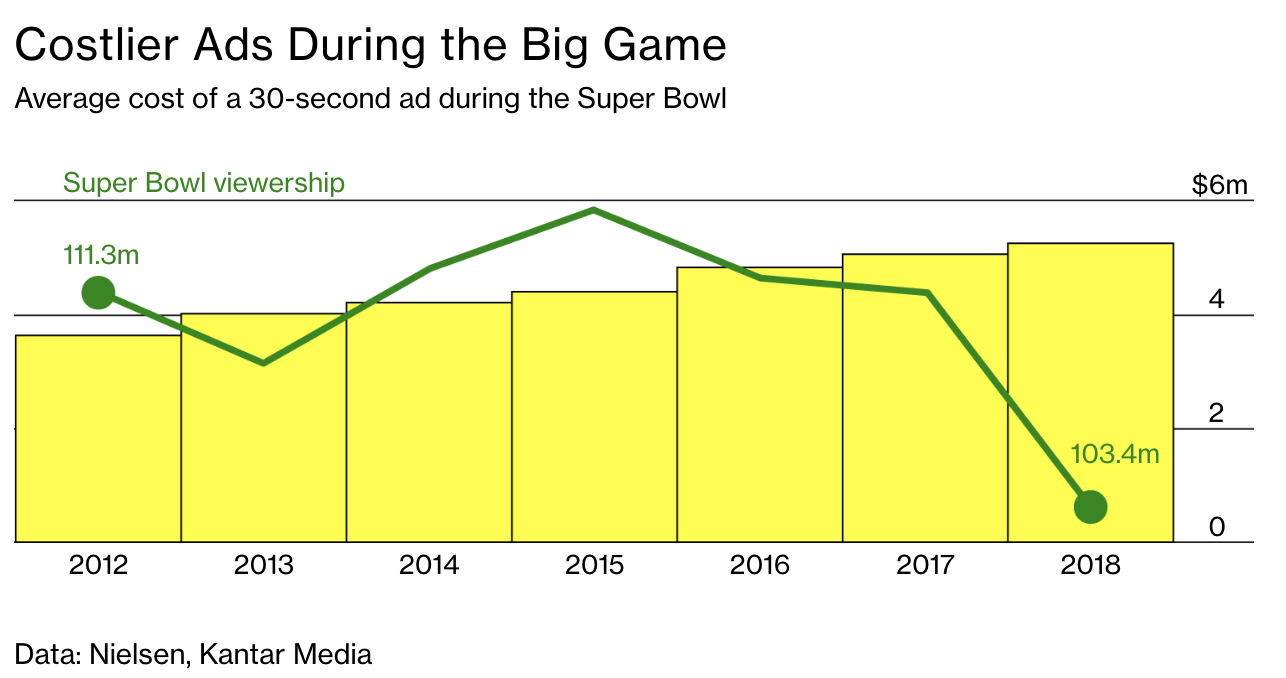 There’s still a business opportunity, but it’s not sustainable. If the new NFL TV deal is large, advertisers will start to look elsewhere to reach the same audience. It comes down to economics. If the price is too high, demand will drop. And as tackle football becomes less and less popular with kids, the supply won’t be there to drive demand.

If Jay Z can get in on a blue-chip franchise like the New York Giants or Pittsburgh Steelers, it would make more relative sense, but those are hard to come by. A smaller market team, which is much more likely to happen, might not yield the return he desires. If Jay Z’s goal is to buy a seat at a table, he’ll get it. But as an investment opportunity, there are better ways to spend $200 million.