How Rappers Started Getting More Mileage Out of Their Music

Artists now get the most out of their music with re-released projects, visual albums, and more. But how much is too much? 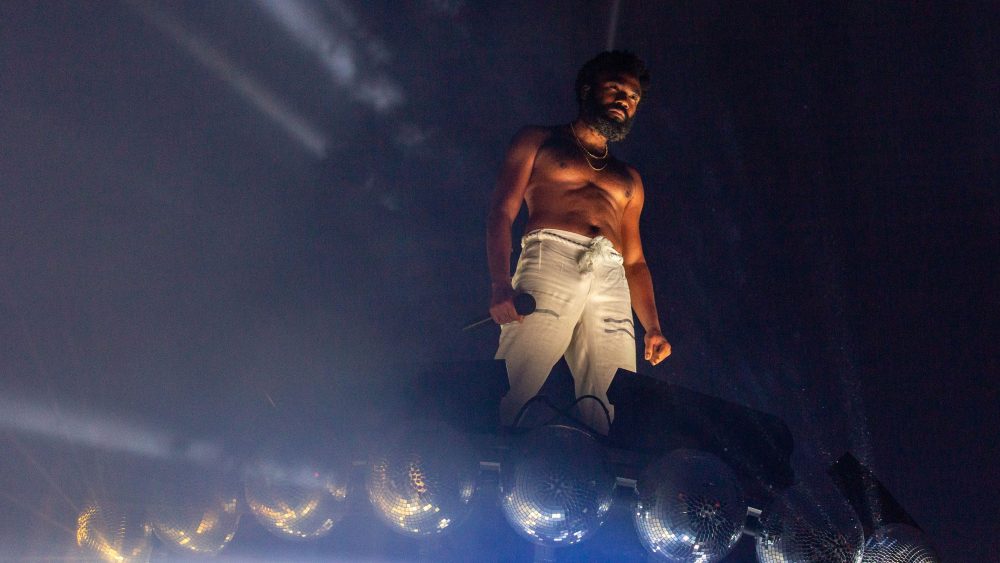 When “Old Town Road” became the #1 song in the country, Lil’ Nas X told us that he was gonna “milk tf out of this song.” At 18 weeks and counting (and likely 18 remixes and counting) the 21-year-old rapper delivered on that promise. Some folks felt like he gamed the system, but those critiques missed the big picture. Hip-hop has been on this tip for a while.

This year, Drake released two albums of previously recorded music, So Far Gone and Care Package. Beyonce charted three times this year; one live album, one rerelease, and a curated project for a Disney remake film. And if we date back to last year, Bey and Jay’s Everything is Love felt like a compilation of songs that didn’t make the cut for Lemonade or 4:44 (…we can ALL admit that now, right??)

Beyonce’s Lion King co-star, Donald Glover, has done the same. It’s been almost three years since his last album, Awaken, My Love! But Childish Gambino finessed a worldwide tour out of his song “This is America,” dropped Guava Island (which was essentially a visual album for “This is America”), and released an EP to keep fans satisfied.

Artists should have no shame maximizing their work. If there’s too much rehashed material though, fans may soon complain about the lack of originality. But when fans get that new material, it might get ignored for the old material that they love. Finding the right balance is an exercise in both efficient production and understanding consumer behavior.

The path to efficiency

In the 80s and 90s, artists maximized their music through compilations and greatest hits albums. Now That’s What I Called Music was one of the highest-selling albums each year. CD sales were so lucrative that the industry could overlook other revenue streams. If other routes were pursued, they were justified as marketing expenses to drive more CD sales. There were one-off instances like Prince’s Purple Rain film, but most artists didn’t have the clout to pull that off.

In 2016, Pitchfork wrote about the decline of greatest hits albums:

Greatest hits collections, once a staple of the holiday season, have essentially disappeared… Whereas albums were often given thorough single-disc expansions featuring unreleased tracks, single mixes, and the like, it’s now either feast or famine, with noteworthy classics blown up into $100 boxes, or entire catalogs getting shoved into a chintzy cardboard box.

In the digital era, once a catalog enters a streaming service or an MP3 store, there’s no need for a reissue and, therefore, there’s no reason for a label to mine the vaults, searching for old music to make new again.

The music industry refers to CDs as its ‘cash cow’ phase, but that’s a bit reductive. Growth was still high and sales were booming. But labels and artists made so much money that it clouded opportunities elsewhere.

Let’s look at DMX’s career. He debuted with It’s Dark and Hell is Hot then dropped Flesh of My Flesh, Blood of my Blood just seven months later. In less than a year, he then released …And Then There Was X. There was no room for the albums to breathe. Some might say X dominated that era because of his body of work, but there were plenty of other artists at the time who dominated without releasing three albums in nineteen months.

Besides his concerts and his lightly promoted Live at Woodstock ’99 album, DMX did not have additional content revenue streams from existing bodies of work. His greatest hits album didn’t come until 2007.

If X came out today, his team would be all over the current wave. There would have been a visual album for It’s Dark and Hell is Hot. Amazon would have created a docu-series about the making of “Ruff Ryders Anthem.” He would have landed a sponsorship deal with Yamaha for all the ATVs in his music video. And Guy Raz would have hosted DMX on How I Built This to talk about how the Ruff Ryders came to be.

Is that excessive? Probably. But fans would have bought in. Let’s be honest. In 1999, DMX could have sold water to a whale.

We need a podcast on how DMX performed for an endless crowd of white people at Woodstock ’99.

Original albums are lucrative, but they are costly too. Artists produce dozens of tracks and collaborate with a bunch of people for each project. The final product is just the tip of the iceberg. By staying true to its model, the industry bypassed opportunities to earn additional revenue from output with lower marginal cost. It takes far less effort to monetize existing work than to create new work from scratch. High margins are great, but efficiency behind those margins matters too.

There’s a production-possibility frontier curve with new music production vs. monetizing older music. Time spent on one is less time spent on the other.

Each decade, the industry gets closer to peak efficiency: 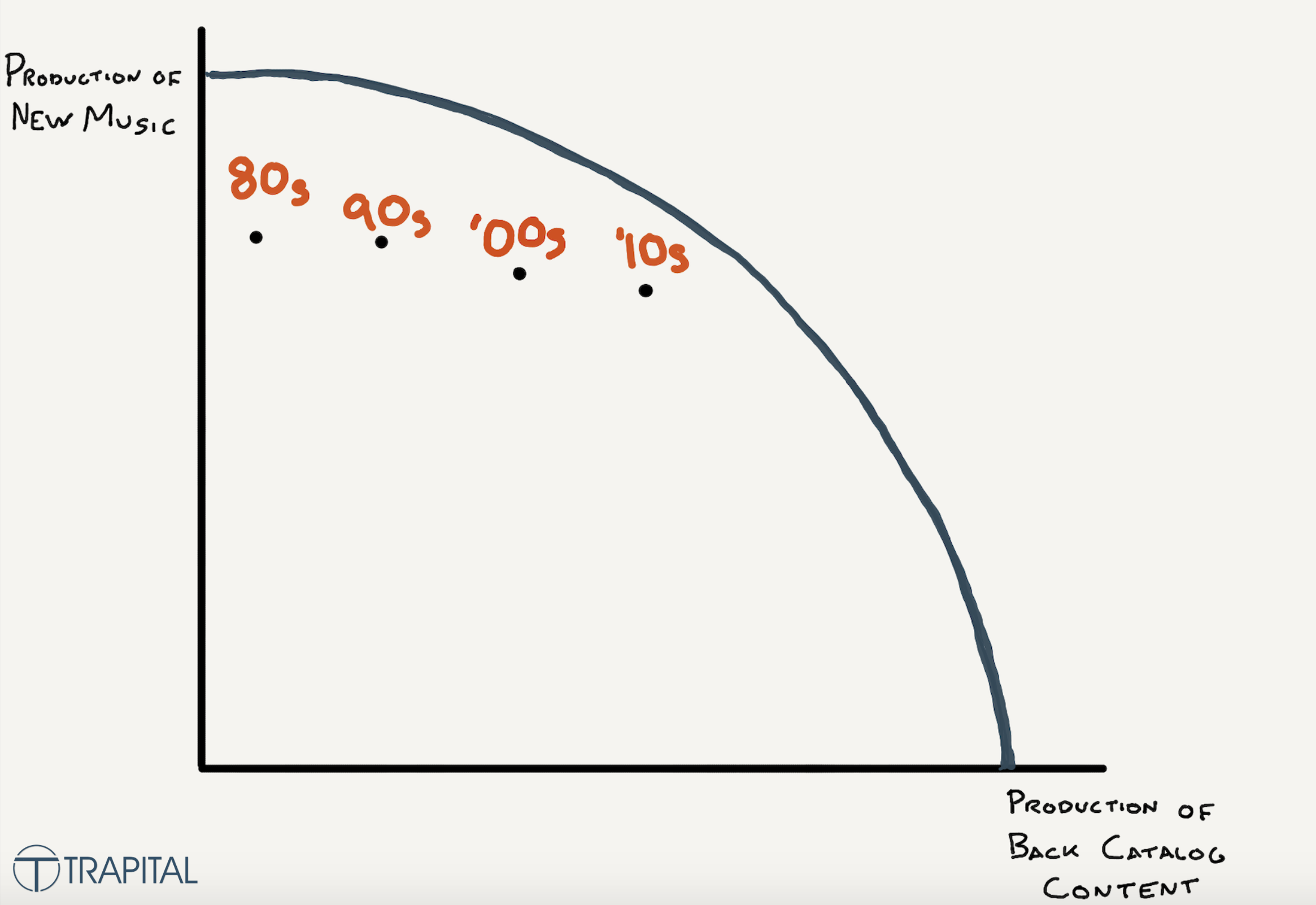 The end of CDs and the end of high entry barriers

The internet has driven the push for efficiency, but that push started out of necessity. Once CD sales declined and digital music grew, the industry was forced to pursue additional revenue streams. In today’s digital streaming era, albums are viewed as loss leaders. The industry began to maximize everything else–live performances, merchandise, and content production.

The content landscape has also evolved considerably. The internet made it easier for small budget creators to produce without access to gatekeepers. Guava Island was not Childish Gambino’s first visual album. In 2013, he released Clapping for the Wrong Reasons, a fairly low-budget production based on his album Because the Internet.

But a lot has changed since 2013 too. Netflix, Amazon, HBO, Hulu, and others have produced more content than ever. Hip-hop has also grown in popularity and power. That confluence made it easier for visual albums and documentaries to reach the masses.

These changes expanded the traditional model. Here’s how the old model compares to the new one: 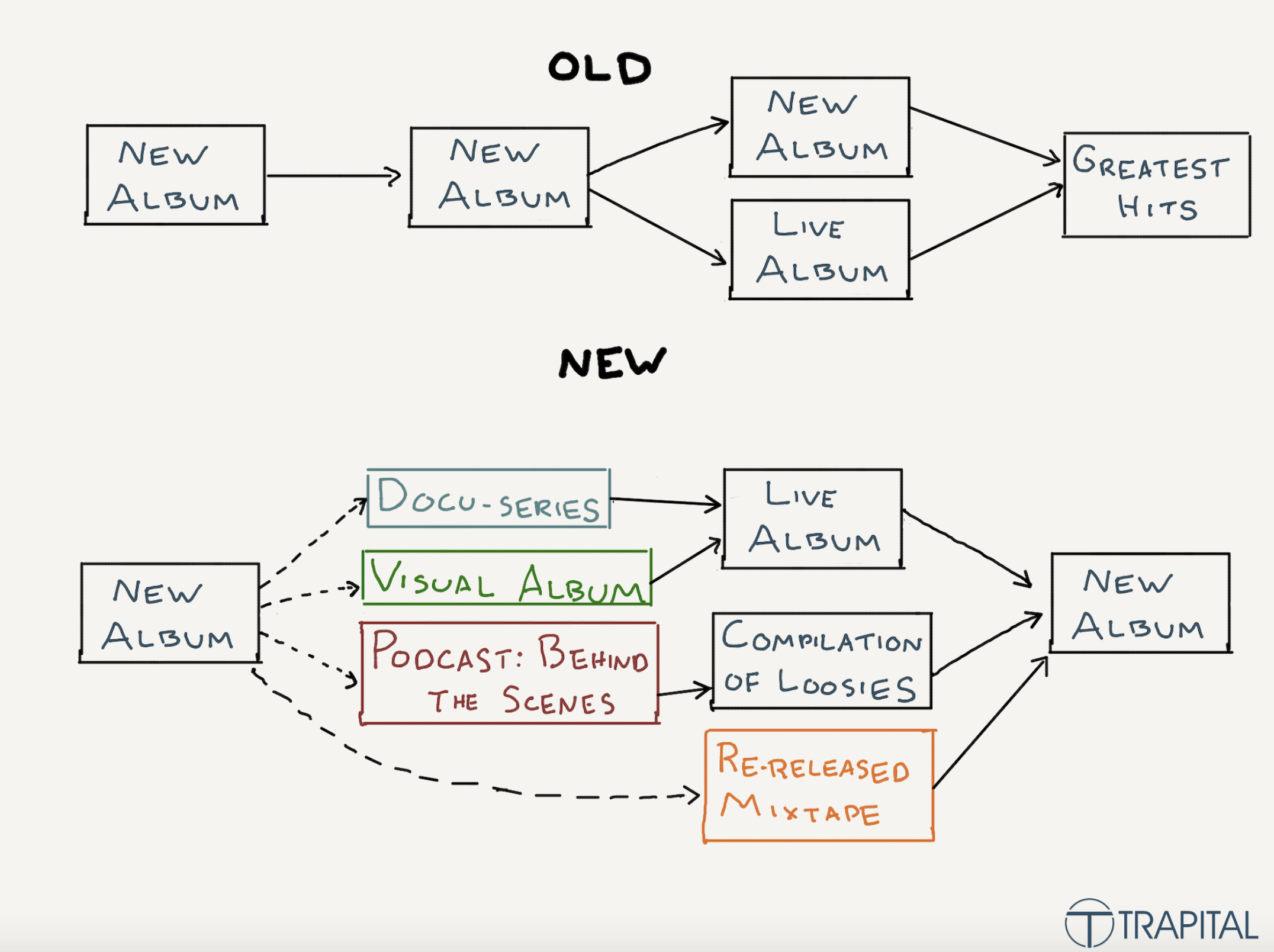 Artists have repurposed their music into behind-the-scenes podcasts, repackaged loose singles, visual albums, and more. Each piece of content became its own entity that supports the artist’s brand.

Today’s big names have shown what’s possible when they maximize their music, but there’s still a balance to strike. As I wrote last month in Why Chance the Rapper Started Selling His Music, the Chicago rapper got everything out of Coloring Book and then some.

Remember, Chance went on not one, but two international tours to promote the mixtape. He hosted the Magnificent Coloring Day music festival in Chicago. He sold millions of dollars worth of hats, performed at numerous other music festivals, landed endorsements deals, and more.

It was a blessing and a curse. His team did a fantastic job maximizing Coloring Book’s useful life, but it didn’t set Chance up for longevity beyond the mixtape run.

By the time The Big Day came around, his buzz ended. And as the charts results showed, fans weren’t fully bought in.

Each piece of an artist’s ecosystem needs to reinforce itself for the present and future. As the buzz for one piece of content ends, something needs to take its place. The best version of this is the well-known Disney content chart. Each outlet leverages its IP, which further strengthens the ecosystem:

Fans may grow tired, but no time soon

Right now, rappers are in luck. Hip-hop is on a nostalgia wave. “Real fans” want the songs that their favorite artist made before they became mainstream. It’s another reason why Drake’s fans made such a big deal about the re-release of So Far Gone and Care Package. A fan who publicly identifies with older songs usually comes from a genuine place, but it’s also a performative act. Telling someone that you miss ‘Comeback Season Drake’ is a subtle way to say “I was up on this shit before y’all.” Meanwhile, telling someone that “One Dance” is your favorite Drake song won’t strike intrigue with anyone.

That “performance” has a monetary value. The industry knows it can cash in on that, but there’s a limit.

In the film industry, nostalgia has matured. Anything worth a remake has gotten a reboot, sequel, and prequel. A lot of stuff that’s NOT worth revisiting has also gotten reboots. Fans will pan the industry for its lack of originality, yet still come out in droves to watch the latest iterations of franchise films. If Hollywood produced less of these films, the complaints would surely subside, but money would be left on the table. The same can be said for music festivals. Each year there are several think pieces about how there are too many music festivals and the market is saturated. But last weekend I just attended Outside Lands in San Francisco, which had its largest crowd ever. Numbers don’t lie.

Hip-hop’s not there yet. Fans have yet to complain about the wave of repackaged content. That means that more money is left on the table. Drake, Beyonce, Childish Gambino, and Jay are getting theirs. Everyone else needs to catch up.

As artists pursue what’s next, these efforts still need to fit the artist’s brand. Each piece should sync. If Blueface decided to make a documentary about the making of “Thotiana,” he should probably stop while he’s ahead. It would make far more sense for A$AP Rocky to do a future documentary on his ongoing trial and tribulations with the Swedish government and how it impacted his music, and his relationship with the public.

It’s preemptive thinking–as Rocky is still in the thick of his legal battles–but based on where things are going, it’s bound to happen soon enough.