Top 40 radio still segments white rappers and black rappers, which places more effort on rappers and media outlets to account for the difference. 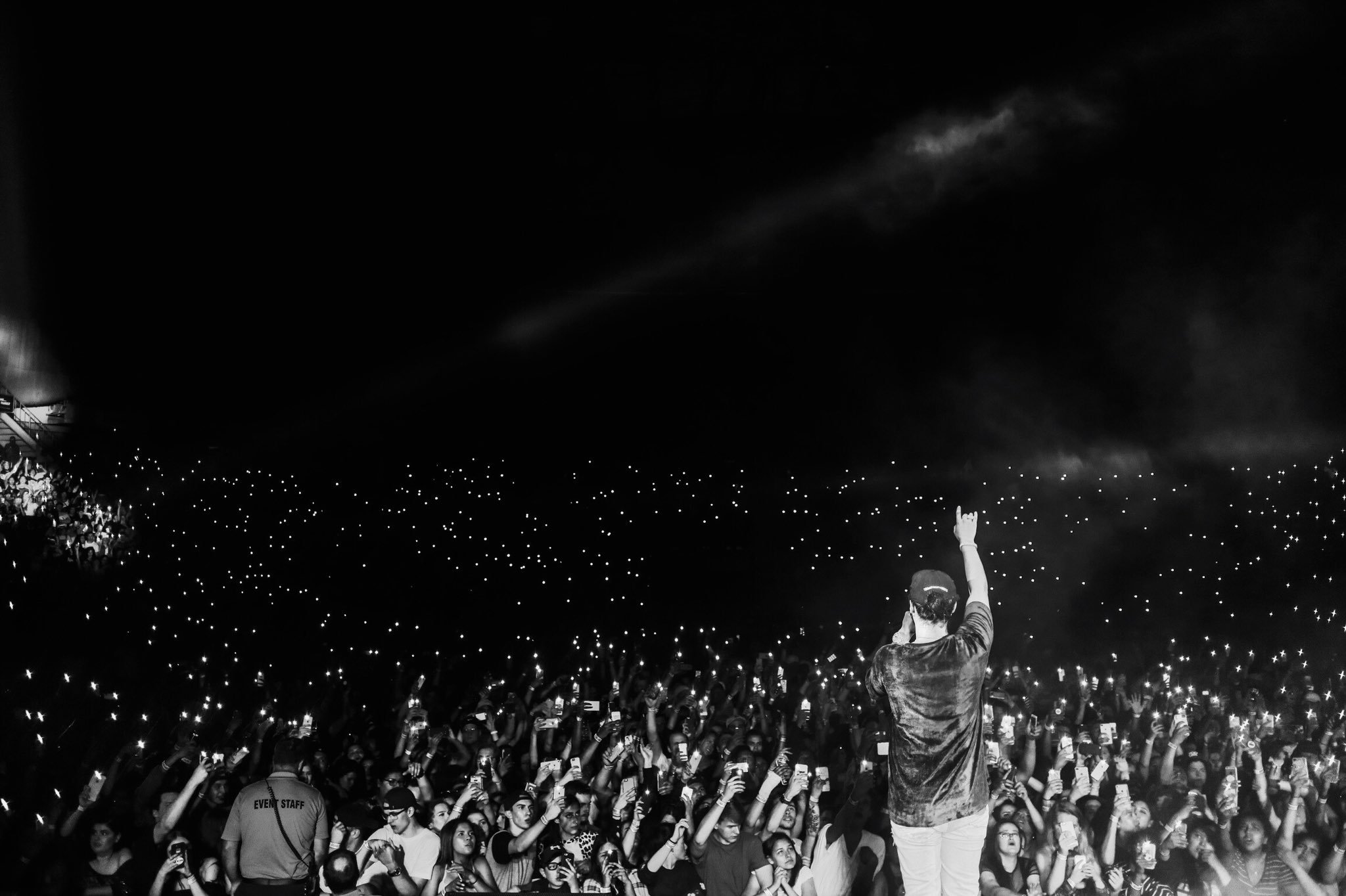 Russ performing for a sea of cell phones in Saskatoon, Canada (via @RussDiemon)

Last November, Russ sold out the Staples Center. It was an impressive feat for a rapper who came up fairly recently. Yet on that same tour, the 26-year-old performed for fans in Allen (Texas), Amarillo (Texas), and Saskatoon, Canada. Clearly, these aren’t your standard hip-hop markets. But it echoes something that Russ said in an interview last month with Joe Budden.

‘The masses’ are the largely white audiences that listen to American pop music. ‘The masses’ can be easily reached via the Billboard Pop Songs chart and Top 40 radio stations that white rappers often dominate. Russ knows this and has positioned his business model accordingly. But Russ also acknowledges the double standards that benefit rappers like him, G-Eazy, Post Malone, Macklemore, and others. Now more than ever, these rappers can succeed outside of the traditional gates of hip-hop.

Despite hip-hop’s popularity, non-white rappers rely on different (and often less effective) channels to reach the masses. Black rappers may get more buy-in from hip-hop media, but shows like The Breakfast Club only reach a subset of the addressable market. The structural differences in radio airplay still hold weight in the streaming era. And the way things are going, those differences will continue to grow over time.

Double Platinum with No Co-Sign

White rappers have benefitted from heightened media exposure for years. Twenty years ago, Eminem had a borderline residency on MTV’s TRL. He stopped by often, referenced the music video countdown show in his songs, and used the platform as his personal distribution channel to reach fans.

But Eminem also had a co-sign from hip-hop legends, which today’s white rappers no longer need. New York Times music writer Jon Caramanica wrote about this in 2016:

“Initially, a co-sign — an imprimatur of authenticity, or at least tolerance, given by an established black artist — was essential. Think of Dr. Dre shepherding Eminem, or Run-D.M.C. taking the Beastie Boys on tour. … But now we have arrived in the post-accountability era of white rap, when white artists are flourishing almost wholly outside the established hip-hop industry, evading black gatekeepers and going directly to overwhelmingly white consumers, resulting in what can feel like a parallel world, aware of hip-hop’s center but studiously avoiding it.”

This ‘parallel world’ gives white rappers preferential treatment on the pop music charts, which reach a wider audience than the Hip-Hop/R&B charts that black rappers rely on. These charts inform the songs that get played on the radio, which still accounts for discovered.

Many radio stations are owned by broadcasting companies that own several stations in the same market. Despite hip-hop’s ubiquity as today’s pop music, these companies intentionally segment their stations to better sell the audience to advertisers. If the pop station overlaps too much with the hip-hop station, the stations lose value to advertisers who prefer targeted audiences. Therefore, pop radio remains as a channel to reach white audiences, and “urban” radio is the channel to reach black folks. The preferential treatment of white rappers on the pop charts is the problematic result. 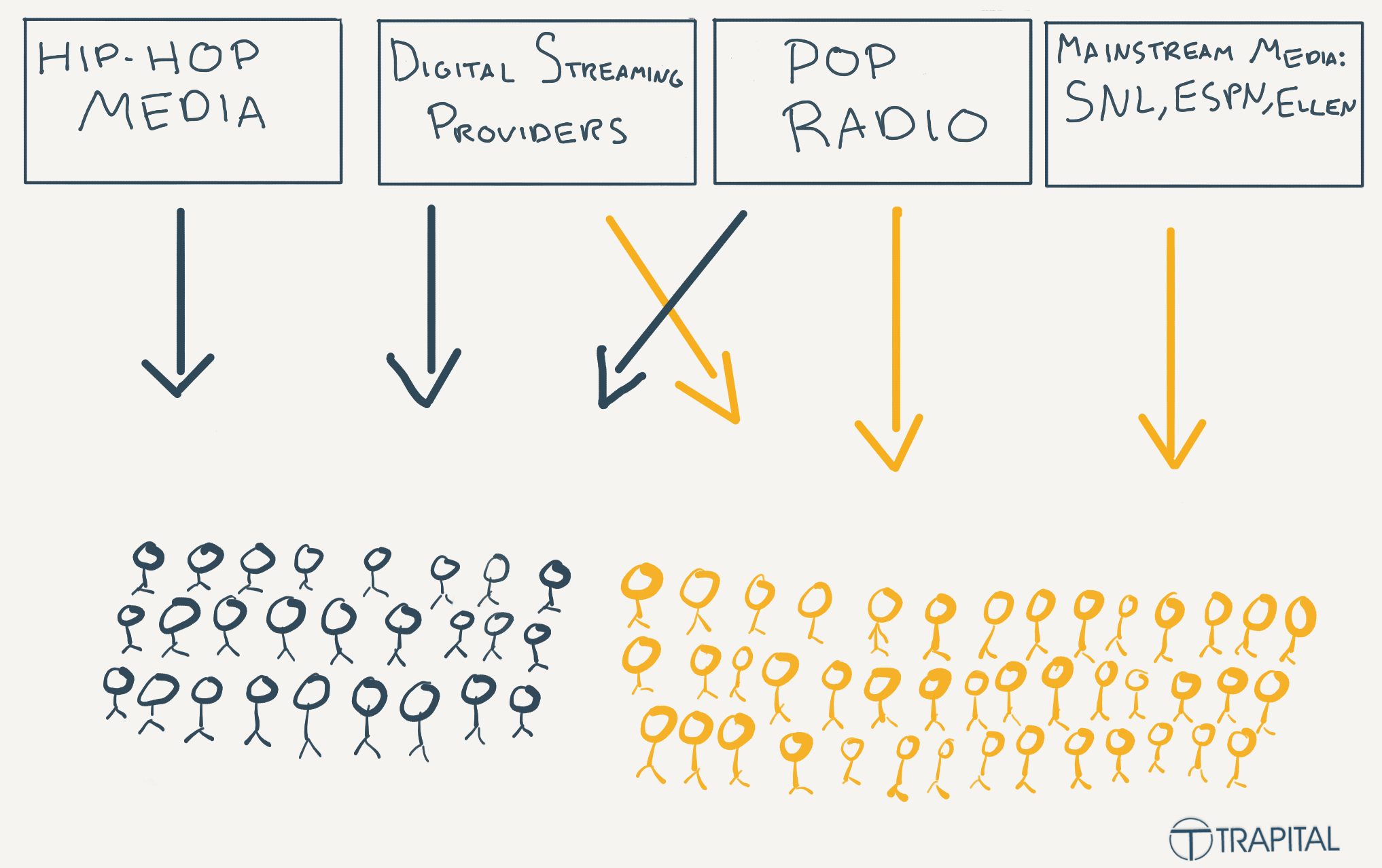 When black rappers try to get on the pop charts, it’s an uphill battle. In an interview with Rolling Stone, Future’s manager said that he couldn’t get “Mask Off” to gain traction on the pop charts. Remember, this was Future’s biggest song. It gave us the #MaskOffChallenge! Future had folks dusting off their flutes and recorders from elementary school to participate in the viral challenge, but pop radio was like, “Nah, we good with The Chainsmokers.” You hate to see it.

Since non-white rappers rely more heavily on the hip-hop charts and playlists, it heightens the importance of hip-hop media. A favorable appearance on The Breakfast Club carries more weight for a black artist who wants exposure with their core demo. But The Breakfast Club may not reach the white audiences who are willing to buy concert tickets for mainstream hip-hop acts.

That’s why traditional media outlets are equally important for black rappers to reach the masses. In that same Rolling Stone piece, Lil’ Uzi Vert’s manager discussed the importance of black rappers stopping by shows like ESPN’s First Take and Saturday Night Live as a way to reach the masses. Sure, arguing with Max Kellerman about who should win NBA MVP will get rappers airtime in college dorm rooms and airport bars. But it’s still not an adequate substitute for the lack of radio play and exposure.

As a result, the business model for black rappers looks a bit different: 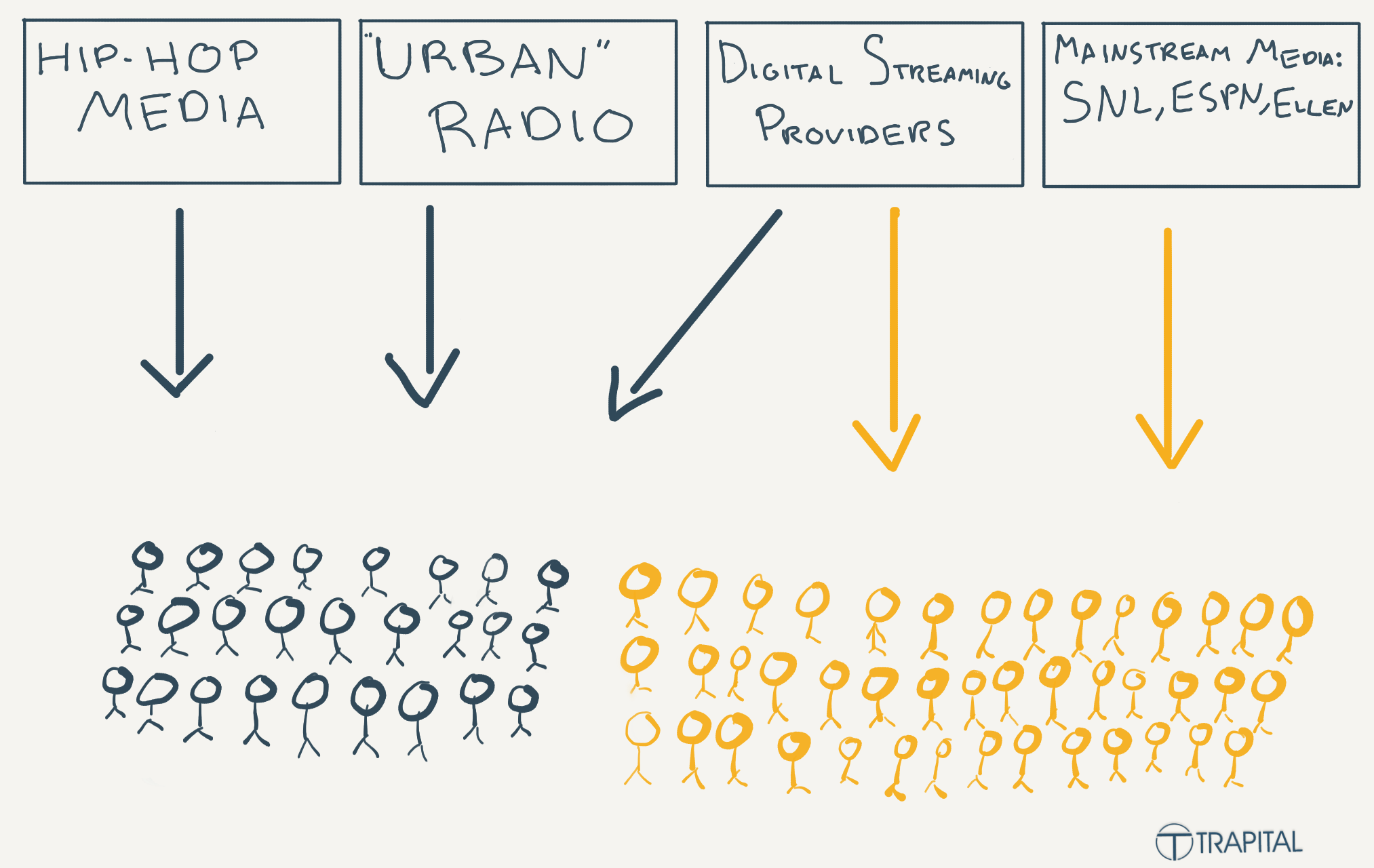 In comparison, it’s less important for Russ to do promo runs on Jimmy Kimmel Live! or The Ellen DeGeneres Show to reach the masses. If anything, Russ’ media strategy has been more focused on promo runs with the core hip-hop media outlets. They provide access to circles that would be challenging to reach otherwise. But Russ’ desire to reach this audience comes from a place of acceptance, not a necessity for success. It’s an important distinction.

The markets will get more fragmented

For years, hip-hop has waited for the inevitable shoe to drop when white rappers take over. It’s an understandable fear given the cultural appropriation that’s happened in both rock and jazz music. Jay Z predicted this back in 2000. J. Cole predicted it in 2014. And Nicki Minaj alluded to it in 2017. The difference in business models already acknowledges a shift in that direction.

But a complete takeover is less likely to happen today. Music’s monoculture is the weakest it’s ever been. Today’s landscape is much more fragmented. And social media is too powerful to let it happen without severe backlash.

What’s more likely, yet just as alarming, is how the fragmented media landscape can make it harder for black rappers to catch their white peers. We could easily see another TRL-type outlet emerge that not-so-subtly caters to white hip-hop and rap-adjacent acts—the same way that TRL was a launchpad for Limp Bizkit, Kid Rock, Eminem, Korn, and others. As long as there are advertisers who want to pay for access to white consumers who listen to white rappers (which there are) it’s bound to happen. It’s just a matter of how much traction those outlets gain.

The most powerful examples of the differences are the ones experienced in real life. Last December, my wife and I drove through Arizona. We heard NF’s “Let You Down” on the radio at least six times in a two-day span. I had to double-check to see if NF was from Arizona (he’s not, he’s from Michigan). It was a bit odd—especially since the song came out a year in 2017. But it speaks to the difference in radio play. There’s not much “urban radio” outside of the Phoenix metro area.

It might be surprising to think about the power that a radio station program directors or mass media still have in an era when streaming, especially since hip-hop regularly dominates the Billboard Hot 100 and 200. But with more music released than ever, fans are more likely to revert back to the sources they trust to sift through all the options available.

Join the music execs and business leaders. Get Trapital in your inbox.