Why Chance the Rapper Started Selling His Music

The 26-year-old rapper changed his strategy for his debut album, Owbum. Will it be enough to recapture his momentum?

Chance the Rapper’s rise to stardom was a moment. The Chicago rapper proudly pushed record labels away to maintain ownership of his masters, publishing, and distribution. He put his music out for free and earned revenue solely from touring, merchandise, and endorsements. Mainstream culture gave him the praise of a critical darling with the coverage of an A-lister. (There was literally a 2016 article GQ titled How Chance the Rapper’s Life Became Perfect). Lil’ Chano from the 79th leaned into his status and challenged anyone that questioned it.

But times have changed. Later this month, Chance will release his ‘debut album,’ Owbum. Fans can now pre-order to purchase on his website. Recently, his seminal mixtapes—10 Days, Acid Rap, and Coloring Book—were also placed on streaming services where he can start earning money off the music.

The man who “never wanted to sell my music because I thought putting a price on it put a limit on it and inhibited me from making a connection,” now sells his music. His site has more bundle options than Amazon on Prime Day.

To be fair, the 26-year-old shouldn’t be tied to one tactic forever. His ownership grants him the control to make these moves when necessary. But the shift says a lot about the current streaming landscape. It says even more about the limitations of Chance’s initial business model.

The “No Problem” rapper hinted in a 2017 Complex interview that he might sell his next album:

“I think I might actually sell this album. That’s, like, a big step in itself. I kind of hate the fact that I can’t chart, really. I can chart, but the way they have the streaming shit set up is weak as fuck. It’s unfair. 1,500 streams is the equivalent to one [album sale]. Nobody listens to their songs [1,500] times when they buy it—fuck outta here!”

It’s a fair point, but in a more recent November 2018 interview on The Joe Budden Podcast, Chance said that Coloring Book could have went #1 if he wanted it to:

“My shit wouldn’t have debuted at #8 if I hadn’t done [the exclusive deal with Apple Music], my shit would have been #1. There was only one place you could get my shit from. If you know my numbers, I’ve done crazy numbers on live mixtapes and DatPiff. I’ve done crazy numbers on SoundCloud. Imagine if Coloring Book came out and it was on Spotify, and on Tidal, and on Apple Music and on SoundCloud the first day it dropped? I got rid of numbers and money that I got to do that.”

In 2016, Chance had all the momentum in the world. The Apple deal was a catalyst that further boosted his run. That two-week exclusivity deal gave Chance top placement on the digital streaming provider’s front page, two commercials during the NBA Finals, and $500,000 that Chance spent on ads.

But a lot has changed since then. Based on numbers, fans haven’t checked for Chance’s recent solo music. His last five singles came and went. He recently tried to launch a viral dance challenge for one of those singles, “Groceries,” but it didn’t gain much traction. Without that same momentum and without streaming exclusives, that boost needs to come from elsewhere.

Chance wants the Billboard charts to provide that bump. The charts matters to him (and most artists) because they grant artists the exposure, recognition, and vanity they desire. For Chance, he hopes that his album bundles will take Owbum to the #1 spot, elevate him back to the top of media culture, and everything will be Gucci.

This adjustment should help, but there are still other challenges to address.

The challenge with loss-leader strategies

Chance is now “officially” monetizing his mixtapes, but the real cycle started years ago. These projects are now in harvest mode where Chance can reap the benefits of his back catalog. He’s already milked his mixtapes for most of their short-term value.

This is especially true for Coloring Book. Remember, Chance went on not one, but two international tours to promote the mixtape. He hosted the Magnificent Coloring Day music festival in Chicago. He sold millions of dollars worth of hats, performed at numerous other music festivals, landed endorsements deals, and more.

It was a blessing and a curse. His team did a fantastic job maximizing Coloring Book’s useful life, but it didn’t set Chance up for longevity beyond the mixtape run.

His business model—give the music away and make money off tour/merch—reinforced a challenge that businesses with loss-leader models can face. Discounted items place pressure and urgency on higher-margin items to recoup losses as soon as possible. This puts short-term wins in conflict with longer-term goals. Most artists in the streaming era deal with this dynamic to some extent, but it was more pronounced for Chance. Not only was his financial success tied to its viability, but he also wanted to back up all that game he was talking. The more money made from Coloring Book, the quieter his haters got.

The loss leader challenge is heightened in music. Fans can stream all the Chance music they want and never buy a concert ticket or hat. It’s a very different relationship than video games, where loss leaders are dependent. A high-priced game like Red Dead Redemption 2 is useless without a loss-leading video game console like PlayStation 4.

The narrow focus on Coloring Book has also impacted merchandise tactics. He made $6 million (and counting) from his popular “Chance 3” hats, (the “3” stands for Coloring Book, his third mixtape). But ChanceRaps.com still prominently sells these same hats with the current album bundles. Most of his diehard fans already copped these hats. What’s new this time around? If his fanbase hasn’t grown in the past year, it’s tough to sell the same items again to the same audience.

Other artists continuously update their merch game. The clothing sold often coincides with a new album, deal, or trend. It creates an informal recurring revenue stream from diehard fans who want to rock the latest gear.

Kanye West has mastered this. In 2007, he sold the stunna shades from “Stronger.” In 2013, he sold the $120 white tees that sold out. In 2016, he sold all the ‘I Feel Like Pablo’ merch. And now, it’s Yeezys. But imagine if Ye was still out here selling stunna shades? That would be foolish. 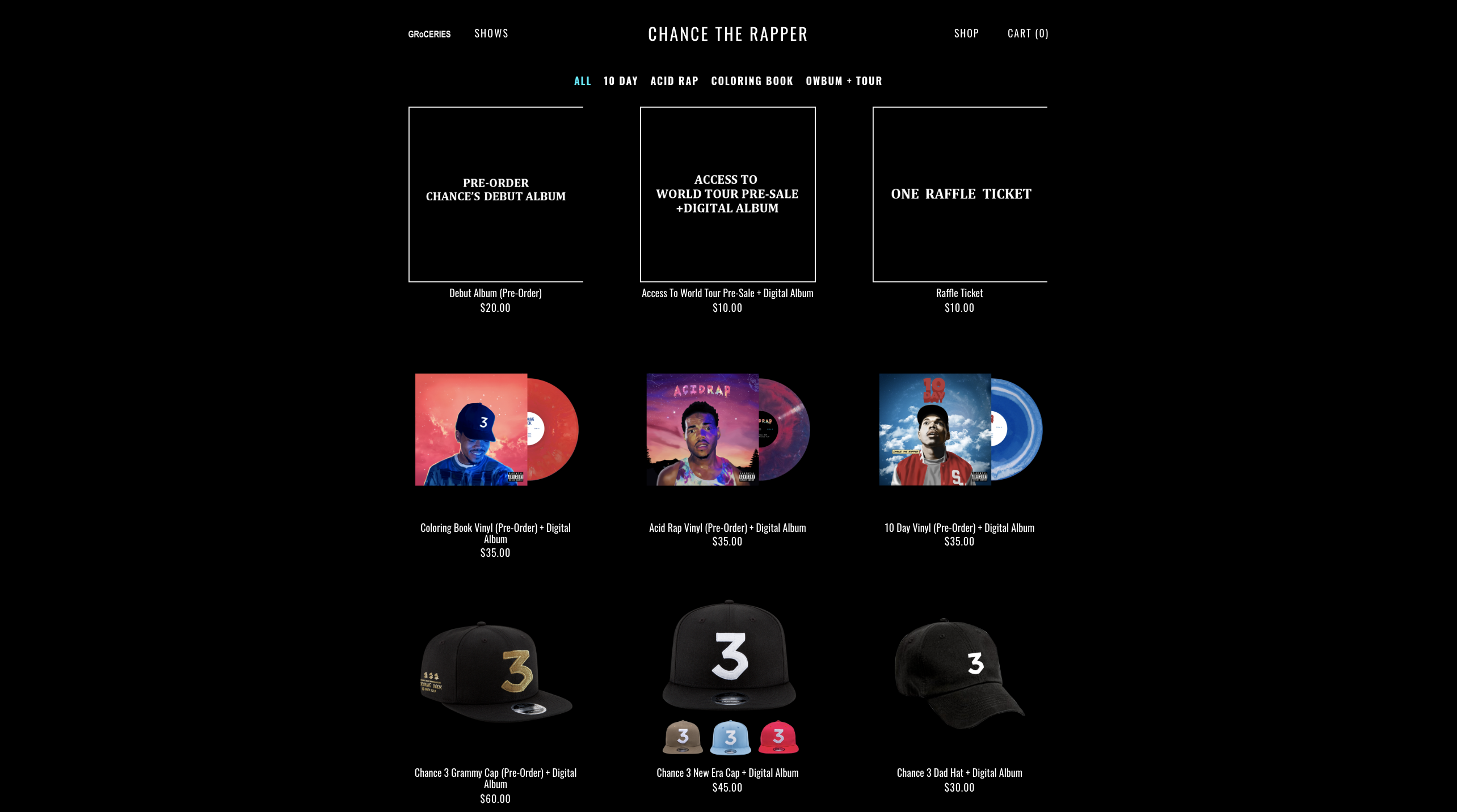 Chance’s ultimate goal, beyond getting Owbum to chart at #1, is reaching the masses with his music. In turn, it extends his platform to show other artists what’s possible. His relevance also maintains his influence with Chicago city politics, philanthropy, and other economic interests.

Selling his music is an initial step, but if Chance wants to ensure he will chart now and in the future, he should consider a short-term distribution deal to push his music. Nipsey Hussle did this with Victory Lap. The late rapper’s partnership with Atlantic Records helped him get samples cleared faster, tap into the label’s resource pool, distribute his music, and have money on deck to pay collaborators.

Nip negotiated the terms he wanted and maintained his ownership. Chance has the leverage to do the same.

Chance’s critics would have a field day if given another opportunity to question the rapper’s independence. (I can hear a Joe Budden rant in my head right now). But that shouldn’t matter. That Atlantic deal didn’t impact Nipsey’s credibility as a spokesperson on ownership. It shouldn’t for Chance either.

Another opportunity for Chance (down the road) is to start or acquire an artist distribution service. It might seem counterintuitive at first, but it supports two of his goals.

First, Chance would have an opportunity to prove that he’s not just “special” as others have claimed. He could prove that his model works by providing select artists with the support needed to succeed while maintaining ownership. Personally, I believe that Chance had a number of subjective factors that fueled his rise (just like it has for Lil’ Nas X), but it’s still worthwhile to pursue. Chance enjoys proving doubters wrong and can give other artists the distribution support they need. If he succeeds, it’s a win-win.

Second, it keeps Chance relevant between projects. Coloring Book and Owbum will be three years apart. He’s not the type of artist who drops a new album each summer. If Chance ran a company that helped artist follow the playbook that helped him, he could stay top-of-mind without releasing his own music. If he got press coverage for creating the type of change he wants to make in the hip-hop, it would fuel his brand.

A lot has changed since Chance dropped Coloring Book. The streaming world is (a bit) more mature since the wild wild west of 2016. It closed some doors, but opened new ones too. It’s a great position for Chance to be in.

For years, critics questioned his indie status, the replicability of his model, and more. Now all eyes are on him. Let’s see whether his shift in strategy is enough to run back his own success.